It’s August (where has the time gone!) and in case the shopping ads haven’t given you a heads up—school supply time is here.  If your kids are like mine, they bring home a laundry list of required items that looks like it may require a second mortgage.  Today’s green tip is good for both the environment and your wallet: reuse as many school supplies as possible.

If you’d asked me before I tried it, I would have said this was impossible; the old items were certainly destroyed and the kids would reject anything that was less than pristine.

But kids will surprise you.  My sister-in-law attended an event where the kids were asked what the “3 R’s” were.  A little girl raised her hand and said, “Reduce, Reuse, Recycle.”

Mine took to the idea of helping the environment with relish and my only concession was putting a few large stickers over heavily marked up items.  Had that failed, I probably would have offered some of the savings in ice cream cones; they were earning it after all!

The best place to start is last year’s backpack. You’ll be amazed at the number of spiral notebooks that are only 25% used.  I ripped out old pages (for recycling) and they were almost as good as new.  Items like pencil cases, rulers and dictionaries are likely to be in good condition—as long as they can be found.  The ice cream cones may help in locating them too!

If your kids are older, ask them if they think they really need every item.  I was used to sending off 6 glue sticks and getting 4 back unopened (which were somehow never on next year’s list).  A seven year old probably won’t have the experience to weigh in on this, but by middle school your kids may.  And if you end up needing one item out of six and have to pick it up later, you have still avoided taxing our landfills with the other five.

Finally, check out items that parents and older siblings may have.  I had a number of old binders with vendor names from decades of career training. Some of these passed as is and the rest were accepted with the cosmetic upgrade of the aforementioned stickers.  My college-aged daughter donated the pocket folders she got on her senior year college visits. We keep a “central store” (an old dresser) where we deposit anything that can be considered an office/school supply.  That way an odd “find” has a real chance of meeting up with a real need.

Good Morning America recently mentioned families spending $600 on school supplies!  I used to spend around $200/year—even rigorously shopping sales.  The past two years, it has been pocket change.  And a boon for the Earth as well! 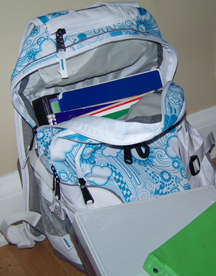