Last week I had the opportunity to try some new pizza.  And salad.  And dessert.  All at a new pizza restaurant in Brookfield, WI called Blaze Pizza. 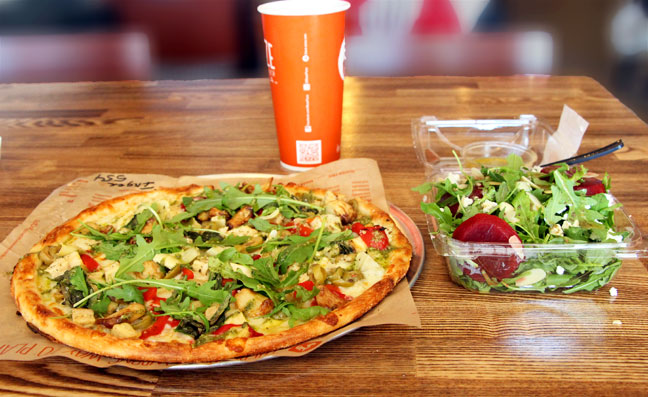 Part of a new chain, spreading throughout the U.S., it boasts a number of novel concepts.  First the pizzas are all individually sized and they offer a great selection of options for “build your own.”    You can go traditional (e.g. cheese, sausage, mushroom) or new age with toppings like artichokes and goat cheese.  Add as many toppings as you like for a flat price (novel concept two–and it really takes getting used to not worrying about the cost of the add-ons).  The only exceptions are gluten free or vegan cheese, which are upcharges–but try to find a vegan pizza in your neighborhood! 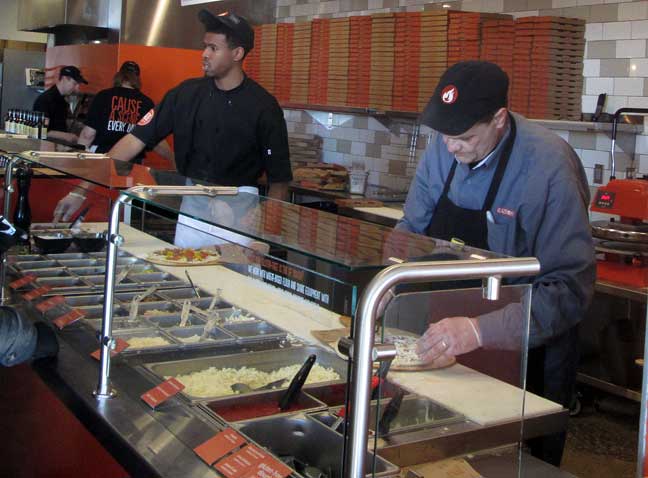 I started out with one of their “signature” pizzas (the Green Stripe), then added artichokes, roasted garlic and green olives.  When the pizza came out of their 700 degree oven (done in 2-3 minutes, novel concept #3), I was delighted.  The crust was tender and crisp and the topping combo was delicious!  The owner, John Walch, explained that many families enjoy the individual pizza concept because it’s the only way the parents get to eat something other than cheese. 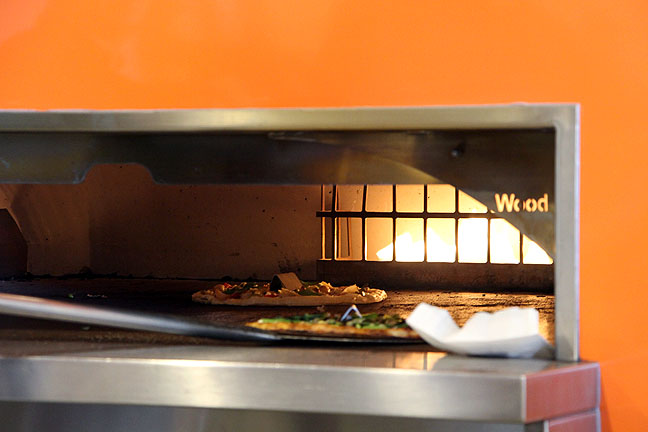 Wow, did that sound familiar!  For our last trip “up north” we arrived to a 55 degree house and decided to go out for pizza.  Our daughter informed us she would stay home and shiver unless we ordered a cheese pizza.  We told her to put on a sweater.  Conversely, when she hosts a get together, I always hope it’s big enough for two pizzas–the first is always cheese and at least we can snitch some sausage slices if there are two.  Yes, a loaded pizza is a parent’s dream! 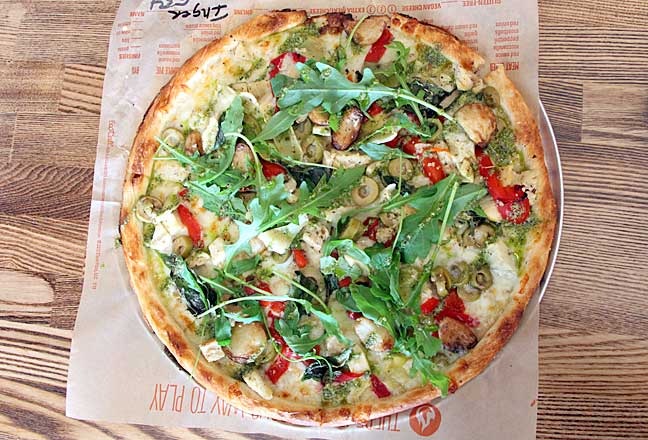 The final “novel concept” is the calorie count.  Walch explained that with a non-meat combo, the calorie count generally comes in at just over 100 calories per slice   This means I could eat an entire 11 inch, really tasty, pizza for 600-some calories.  Fatefully, pizza is probably my biggest diet weakness.  This woman who can step away from a three layer cake is helpless in the face of steaming slice.  I sooo love this idea! 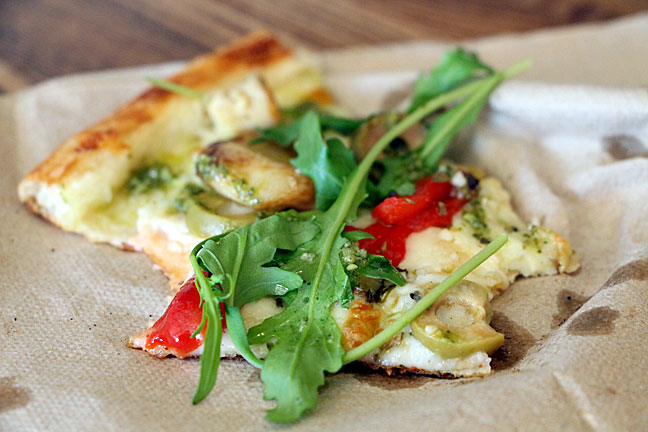 I rounded out my meal with a lovely salad of arugula, beets (yes, I do eat those on purpose),  goat cheese and almonds, that would be at home in a more elite establishment and a classic s’more, which I enjoyed and has to be an even bigger hit with the younger crowd. 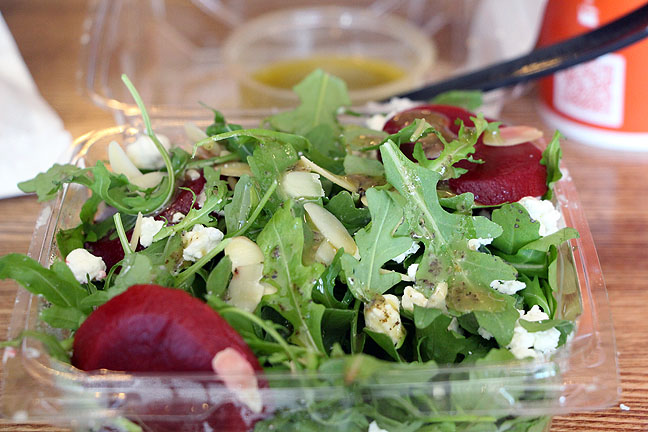 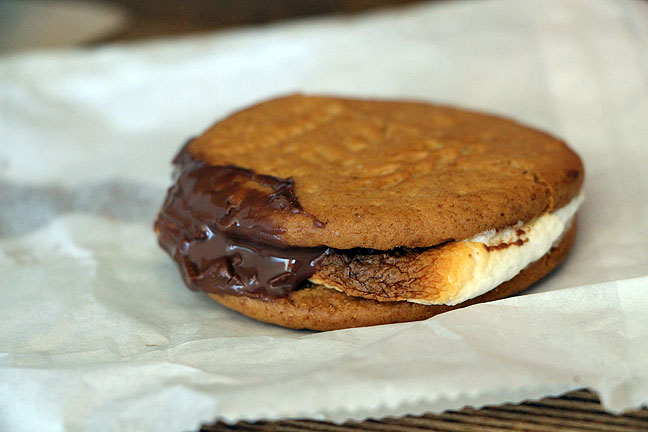 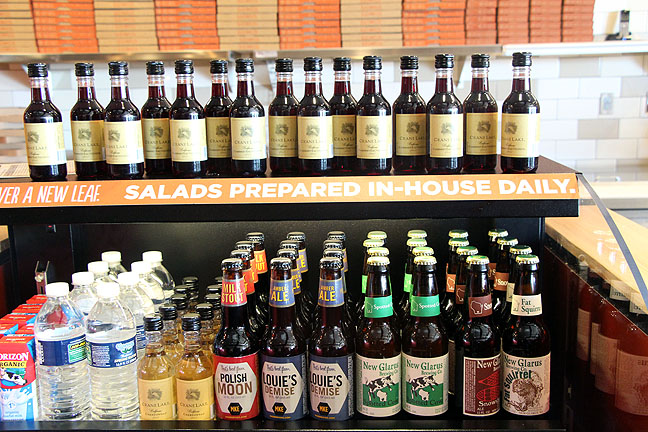 With pizza, salad and dessert, I was stuffed and took half the pizza home, figuring that my husband would enjoy the leftovers.  When my (cheese pizza) daughter got home from school, she took one look inside the box and started pulling off green olives.  Everything else passed muster, and she declared we could take her there anytime. 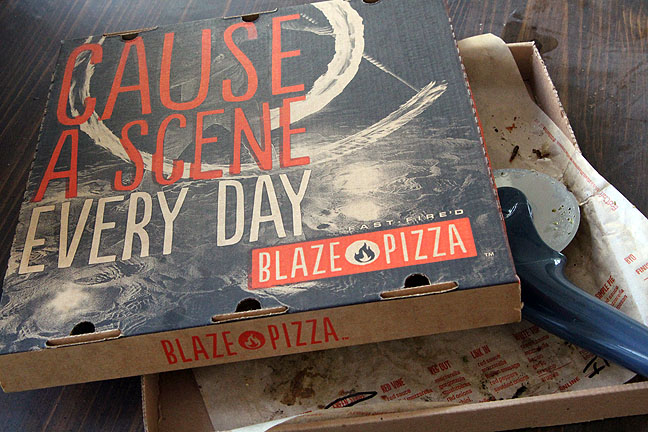 The only complaint I have is that they are on the other side of town.  Walch mentioned he was looking at opening additional locations.  Hmm, could you puh-leeze open one near me?

Disclaimer: the food was provided free for purposes of this review.

24 thoughts on “Blaze Pizza… Your Way”