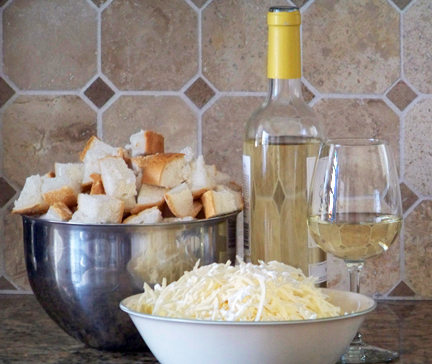 I have always been a serious cheese lover.  With my Wisconsin birthplace and Danish heritage, it was practically fate.  So when I came across the American Cheese Society on facebook, I was delighted to friend them.  All was well until I came across a cautionary tale about a possible ban on raw milk cheeses including Parmigiano-Reggiano, Roquefort, and (insert audible gasp) aged Gruyere.

I could hardly believe my eyes.   Was the FDA seriously thinking about ending a centuries old cheesemaking tradition?

You see, there is nothing quite like a good Gruyere.  Warm, nutty and mellow, it can make your eyes close like a first kiss.

Gruyere is amazing with eggs, shaved over arugula, or nibbled au natural, but there is one use that has special place in my heart, fondue.

I first sampled it back in Ms Bussone’s high school French Class and it was love at first taste.  In the following years, fondue remained trendy and I served it regularly.  Then it faded in popularity but never from my thoughts. 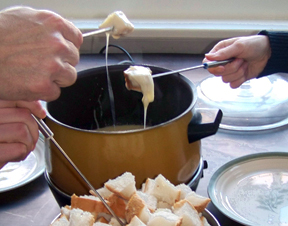 When my kids hit school age, it was time to resurrect the dish.  I made my original cheese fondue, added steak in hot oil, and served chocolate fondue for dessert.  It was a meal for special occasions and ultimately became our New Year’s tradition; avoid the drunks, eat fondue, then curl up in front of a fire to watch “The Holiday.”

Fondue was even the last dinner I shared with my father.  Acutely ill from cancer, I was overjoyed when a friend of his offered to drive him to our “cabin up north” for what would be his last trip there.  He spent most of the day on the sofa, fighting pain and nausea, and wasn’t well enough to take us out to the fine dinner he’d planned.  Always prepared, I whipped up my fondue and he rallied to join us around the kitchen island, laughing and joking—at least one more victory for quality of life.  I don’t think it’s even possible to eat fondue without having fun.

And so I had to ask… what (level of raging paranoia) could possibly motivate a ban on my beloved Gruyere?

According to David Gumbert , one of the things we are witnessing is the use of value-laden language, for example Stephen Sundlof of the FDA’s references to “escalating interest in raw milk consumption,”  (we all know that escalation is bad, right?).  And at an ACS session on surviving a cheese recall (where if my memory is correct, contamination was found on only one sample—nothing in frozen samples or other locations), an audience member was quick to suggest that this may have been because the cheese was made from raw milk.  I was starting to experience a weird McCarthy-era-like déjà vu.  But… cheese demagogues?

Ok, perhaps I am taking this too far.  Banning cheese (however surreal it may feel) does not quite rise to the level of political persecution—unless perhaps you are a farmer or cheesemaker.  But we can smoke cigarettes (how about slapping a really scary warning on raw milk cheese?), we can ride motorcycles without helmets (at least in Wisconsin), and we can gorge ourselves on junk food.  It’s time to put an end to the witch hunt. 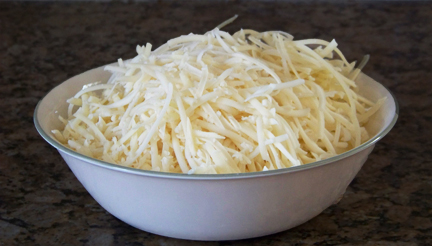 So (get it while you can), here is my recipe for cheese fondue: 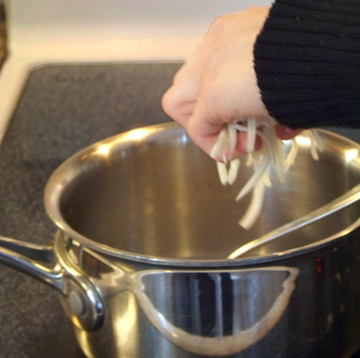 Tip:  Be sure to use a good Gruyere; the one time I used a poorer one it was very noticeable, even with the wine and Swiss cheese.  You don’t want to miss that first kiss effect! 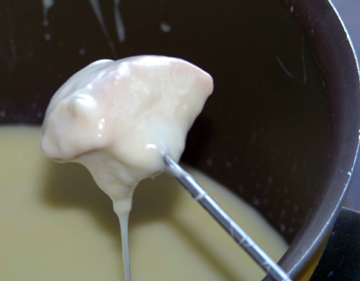