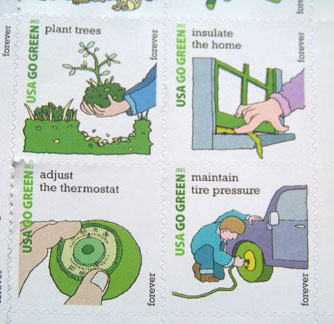 I blame StumbleUpon—or perhaps I should thank them.  One of their recommendations took me to  a site that delivered some dismal news.  My green(?)  lifestyle actually requires 3.9 planets to support.

After years of trying to live conscientiously…  including insulating the attic, buying down comforters, and eating local, this was a tough blow.

The average North American household is even worse at five planets, but I find little solace in this.  In the end,  we only have one planet.

But … what else could I do?

We had already begun some positive activities like recycling and eating local.  And we had taken the obvious energy conservation measures like insulating, using compact fluorescent bulbs,  replacing windows  and so on.  I even cooked pot roast outdoors to keep from heating up the house!

But my One Planet score was still terrible and, indeed, our electric bills are painfully high.

I had heard a lot about energy “vampires”—devices that suck power even when you aren’t using them.  So I checked a kill-a-watt out of the library and decided to see for myself. 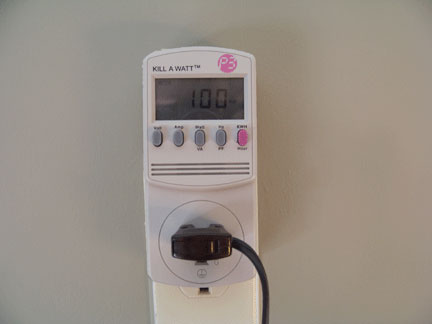 The kill-a-watt is a small device that measures things like the watts and kilowatts that your appliances use.  You plug the kill-a-watt into your outlet, then plug the appliance into that and take a reading.   I went from room to room checking anything small that plugs in.

Here is what I found:

Family Room: TV and attached devices came in 22 watts with everything off (actually good—people with fancy electronics are much higher).   The stereo did a little better at 10 with everything off.  Hmmm, it will cost us around $35/ year if we don’t even  enter the room.

Master bedroom:  This contained a variety of miscellaneous devices and a treadmill holding up laundry at 4 or 5 watts.  I’m pretty sure the treadmill could hold up laundry at 0 watts.

Study:  Here we had eight devices that consume a small amount of power (3-4 watts) when “off.”  These included a paper shredder, a charger that wasn’t charging anything and a power strip using power even though nothing was attached! 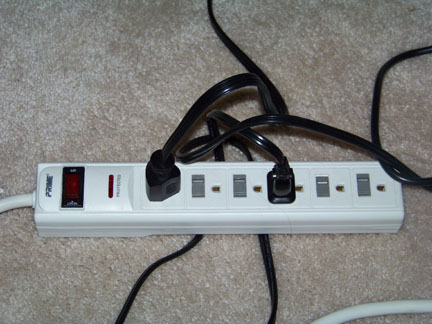 Kitchen: Even my free-standing mixer uses power while off as well as the phone, TV, and radio/CD player.  Only the toaster read zero watts (when not toasting).

Next week:  What are we changing…

6 thoughts on “Kill-a-watt Takes on the Energy Vampires”