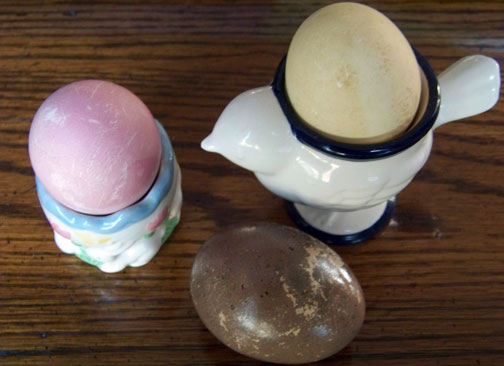 I have been dying Easter Eggs naturally for years. It’s fun and easy–and I always feel more in touch with nature and the returning spring!   Beets for pink, red cabbage for blue and Turmeric for yellow.  With the primary colors covered, you can do anything…  (directions are at the bottom of this post) 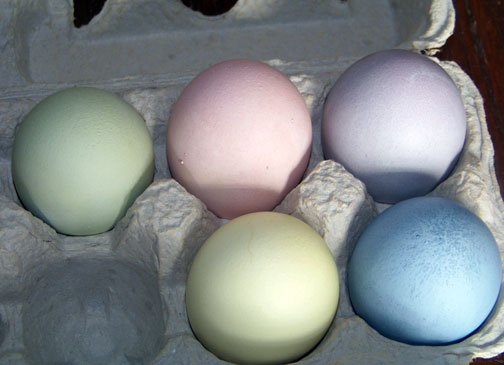 Not wanting to rest on past successes, I started the tradition of trying new natural recipes last year and this year I decided to experiment again.

In addition to trying a couple new dyes (red wine and green tea), I decided to experiment with brown versus white eggs and hard-boiling the eggs in the dye (which some people say gives more intense results).  Here are the results: 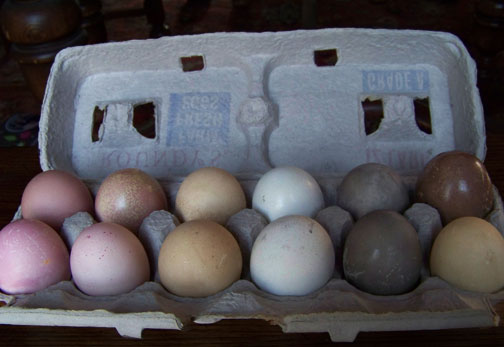 I was admitting to some disappointment in the results, but then my sister said the brown egg cooked in wine (also shown in the top picture) looked artistic.  Aren’t sisters nice?!

Hard boiling the eggs in the dye:  more work, poorer results—unless perhaps you are going for that artistic look of the brown egg cooked in wine (and honestly I don’t know if that would be repeatable).

Wine:  blue was pale and inferior to the blue from red cabbage.  Given the price of even a bottle of Two Buck Chuck I probably won’t be trying this again.  Note to self—no eating up all the CSA red cabbage next year.

Green tea:  turned a nice butter yellow, a bit darker and less sun-shiny than the turmeric I have used in the past (which sometimes blotched the eggs).  Hmmm, wonder what the combo would look like…

Coating in oil:  this looked good—pretty exciting for an afterthought!  For an egg hunt, I probably wouldn’t do this, but if I were putting eggs out on a formal table, I think I’d oil them for the visual impact.

Although the results were generally not as good as the original recipes, I had a lot of fun.  Next year—wild grapes, red zinger tea, and cranberries!

For green eggs, dip in yellow first, then transfer to blue.  For purple, place in red, then blue.   Enjoy!