Rhubarb is a perennial vegetable that’s used like a fruit!  One of the season’s first harvests, it’s fun and easy to grow with a few rhubarb growing tips. 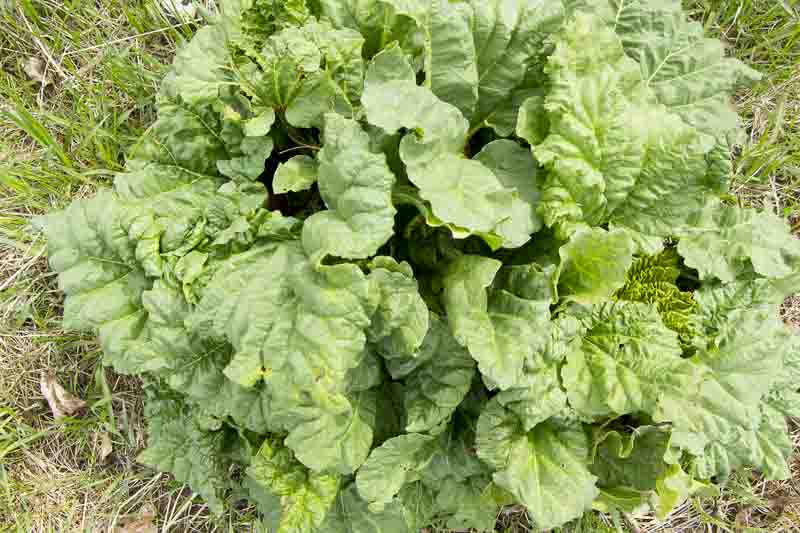 I got a frantic text from a friend the other day. It went something like this: My rhubarb’s gone crazy—help!

At first, I thought she needed recipes—a good problem! But she followed up with a picture of her plant. With seed spike shooting out in every direction, it was obviously stressed. And it was only May. 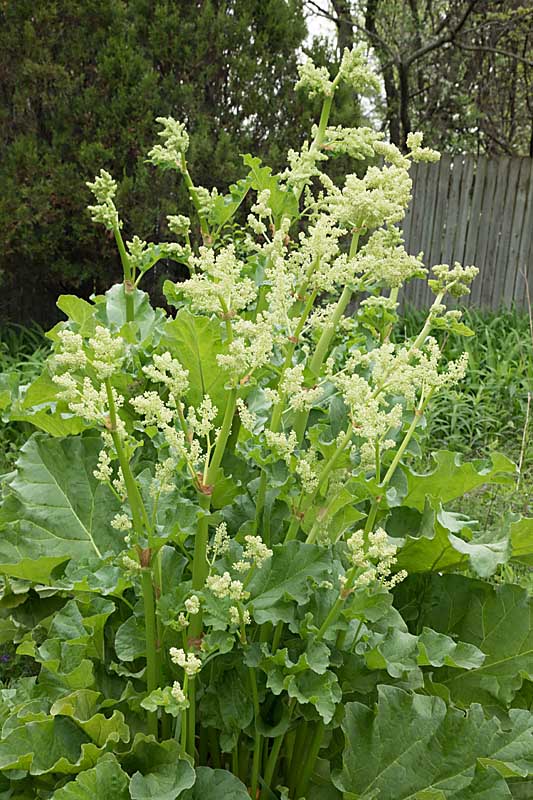 This stressed out plant needs some rhubarb growing tips 🙂

After telling her how to divide it, I thought I’d share some rhubarb growing tips with readers too.

Where Does Rhubarb Grow?

Rhubarb officially grows as a perennial in areas as warm as zone 8, though in 7 and 8 it may require protection from heat and sun plus extra attention to watering. In zones 9 and 10, it can be grown as an annual from seed. But ideal conditions are full sun, zone 6 or cooler, with a steady but not excessive supply of moisture and chilly winters.

The preferred soil ph is slightly acidic (6 – 6.8), but it grows beautifully in southeast Wisconsin’s alkaline soils and I hear as acidic a ph as 5.0. 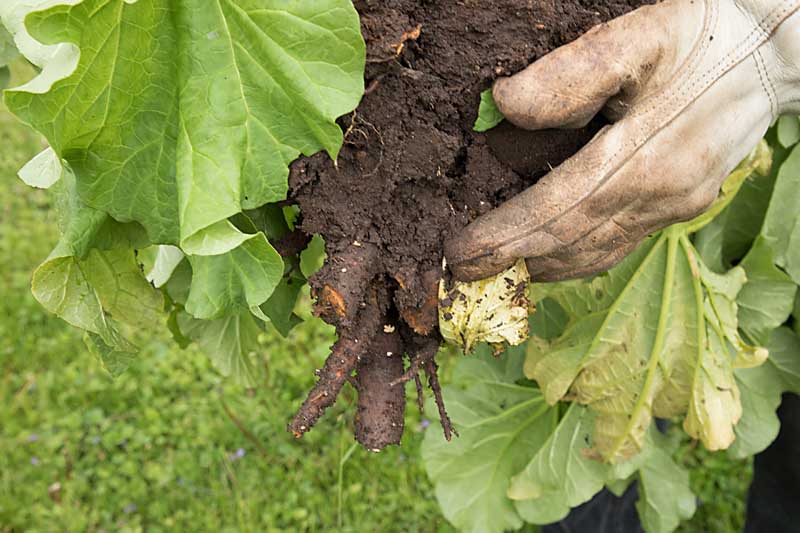 How Do I Start Rhubarb?

The best way is to start rhubarb is with a dormant crown or small plant (aka division). My first plant came from a crown in perforated bag at a Home Improvement Store and my second as a small plant/division on a country road stand.

Right now, on my Wisconsin neighborhood forum, people are offering divided plants for free, so that may be something to look into. Or talk to your gardening friends!

Plant at the same level as the original plant and, I hate to break it to you, don’t harvest the first year to let the plant get established.  Space multiple plants 3-4 feel apart. That will look delusionally optimistic the first year, but you’ll thank me when you can go an extra year or two before you plant turns into a stressed out spike monster. 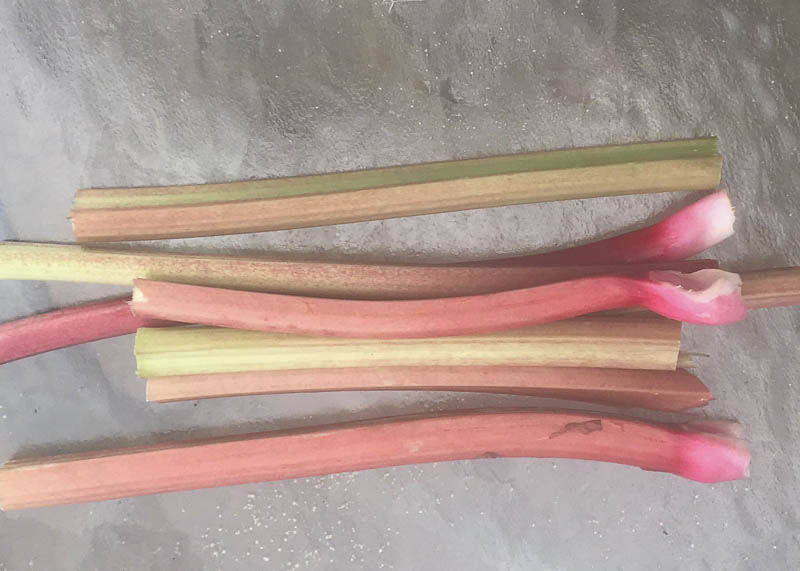 Red, green or a combo?

What variety should I select?

If you live on the fringes of the growing area, you may need to pay attention to your variety. Otherwise the main criterion tends to be color because rhubarb stalks come in red or green or (usually) a combination of both.

If you like to take pictures of your food, I suggest a red plant. Or one in red, (fantasy rhubarb) and another in green (beautiful next to strawberries). Food blogger alert! 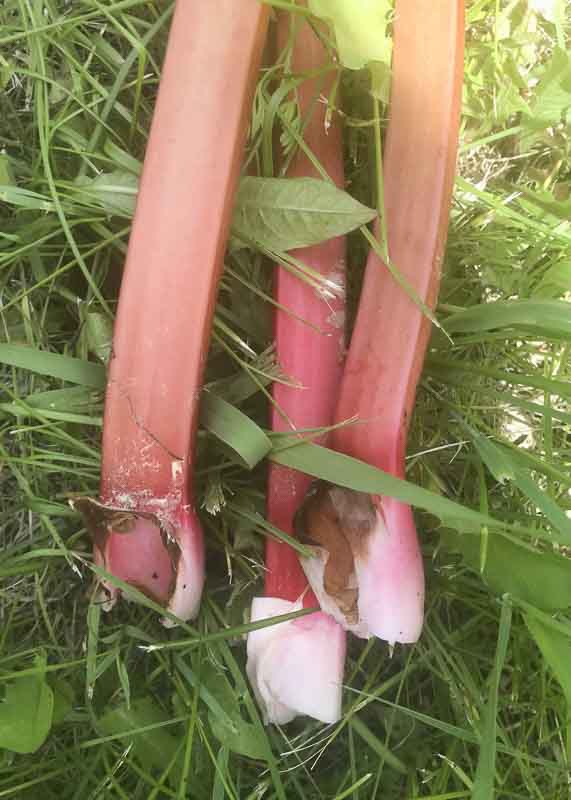 These stalks pulled off easily–not always the case!

If you just want to eat it, take whatever you find first. It will taste good either way and actually getting it in the ground is more important than color.

How do I harvest?

Rhubarb is toxic except for the stems so that is the part of the plant you will be harvesting. To harvest, gently pull off or cut a stem at the base then discard the leaf portion. Gently pulling off is preferred, but my stems seem to hang on for dear life, so I always bring a knife. A knife is handy anyway to cut off the leaves and move directly to the compost bin.

What’s this about toxic?

Most of the rhubarb plant is toxic due to high levels of oxalic acid. Only the stems (aka stalks) are reliably safe to eat. The flowers, including the flower stalks, should not be eaten (you may read controversy around this, but the University of Iowa says to discard).  Letting the plant develop flowers wastes its energy in any case. The leaves and flower stalks are safe to compost however and usually get cut down and moved right to my compost bin. 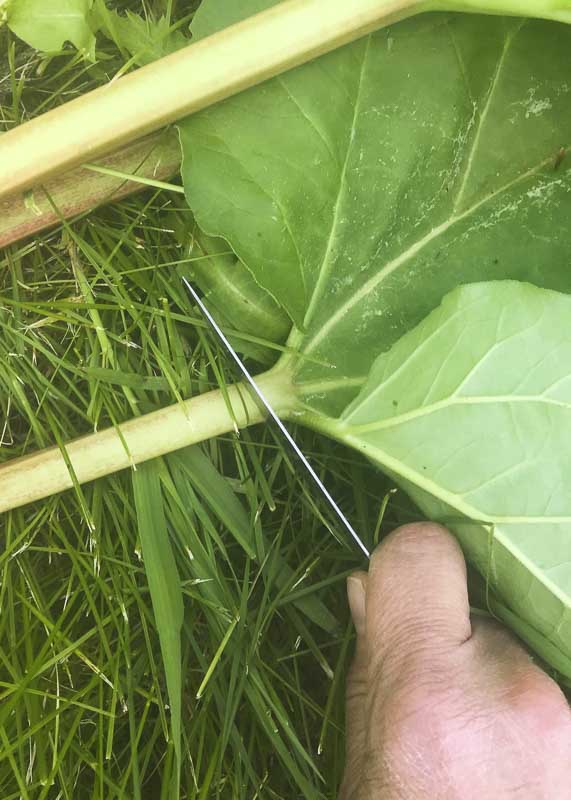 I cut leaves off in the garden and compost immediately

How late can I harvest?

Many sources tell you to stop harvesting in summer to let the plant recover. I have harvested all season (spring through fall), however, and suggest you let your plant’s health be your guide. If it is still vigorously producing new growth it should be safe to continue harvesting. Just be sure to leave enough leaves for the plant to “recharge” for the next season.

And if it’s really producing, you can even freeze rhubarb for use in the winter! Just be aware that it seems to get “wetter” after freezing so may be better suited to pies and jams than cakes. (Yup a fringe benefit of getting garden advice from a foodie.) 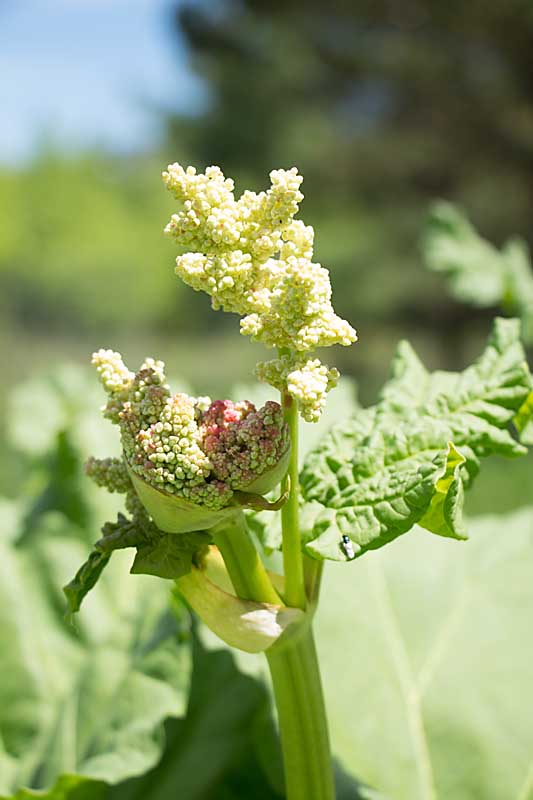 What are these strange shoots coming out of my rhubarb plant?

Those are flower stalks.  A perfectly content, early season rhubarb, tends to look like a rounded mound of large leaves, without flower stalks–like the first picture in this post. At the end of the season, the rhubarb will start to prepare for winter and send out flowers to produce seed. This is normal, though the shoots should be cut off at the base, so the plant doesn’t waste energy on seed that won’t get used. 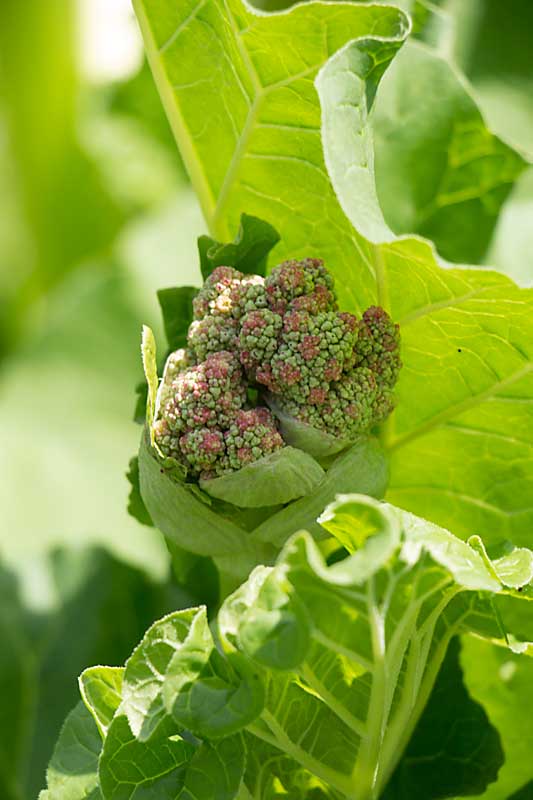 A couple shoots early in the season is also pretty common but can be a sign of early stress. If you see rampant early shoot growth (like the second picture in the post), however, your plant is sending out a cry for help (see below). Life can be tough even for a rhubarb.

What do I do about a stressed-out rhubarb/How do I divide my plant?

Stress is sometimes due to poor environmental conditions (heat, low water, pests), but rhubarb is generally pretty tolerant. So the usual cause is that the plant has become overgrown and needs to be divided. This is nice in the long run because it means more plants for free. 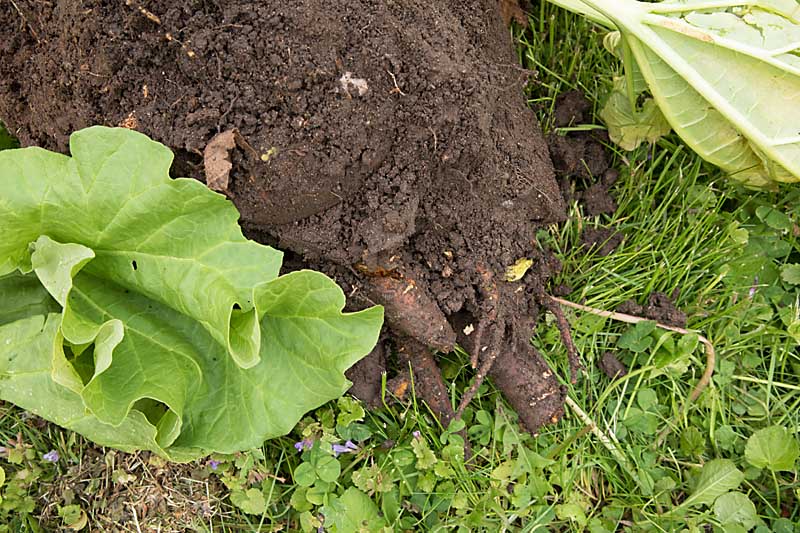 To divide, you typically dig up a clump of rhubarb using a heavy garden spade, the kind with the flat end.  Then, focusing on the thick underground tubers, you set the plant on the ground and split it roughly along a normal break, trying to do the least damage.  Don’t get too obsessive about this, you are going to injure the plant some and it’s going to come back anyway. 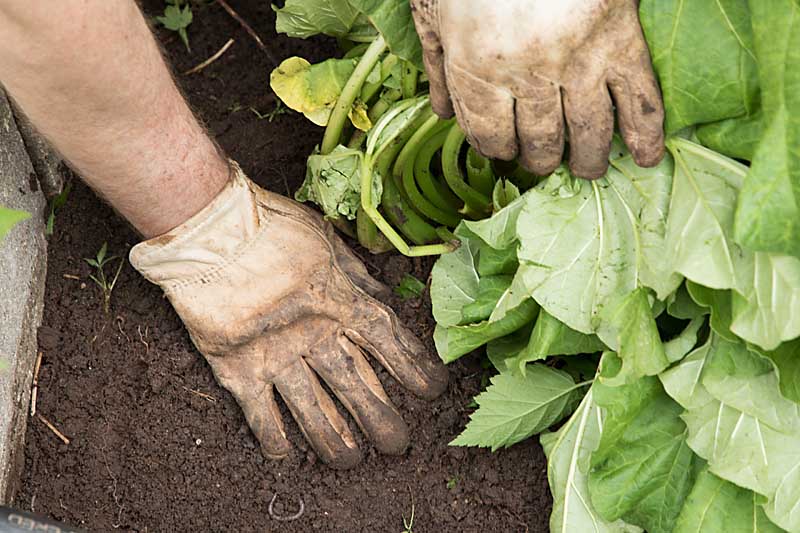 After dividing, plant at the same level and give the “new” plants lots of water. The old growth may or may not die back, but even if it does (because “mom” goes on vacation and “dad” forgets to water), don’t give up prematurely since new growth may shoot up from the ground even if the plant appears dead. 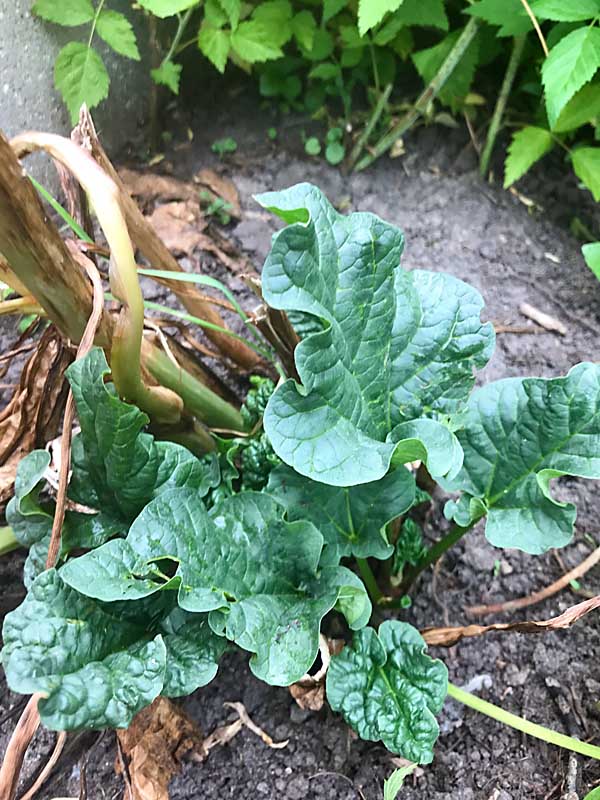 This division died back and regrew from the roots when it was initially watered inadequately.

I feel that the best time to divide is in the early spring before the plant has put out much new growth.  But I pretty much always miss this and end up dividing in early summer and watering like crazy.  Haven’t lost a plant yet (knocking wood!) 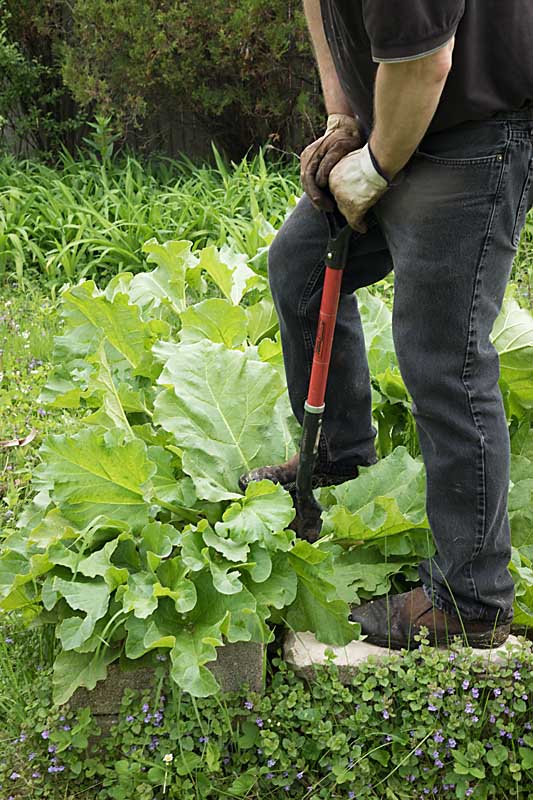 You will unfortunately need to wait until the next year to harvest again, since the divisions are pretty much like new plants.  I try not to divide all my plants the same year.  If you only have one plant you may have success with digging out part of the clump and leaving the rest of the plant in place.  The dug out section will need to be treated like a new plant but with luck the remaining portion will produce like usual.  Or maybe better since it now has more space and less competition for resources.

What ongoing care and feeding is required?

Rhubarb is pretty much a “plant it and forget it” kind of vegetable–hooray, (so you might not even need these Rhubarb Growing Tips)! Every five years or so, a plant may need to be divided. I watch for stress and take my cues from the plant.

Your rhubarb plants will also appreciate some light fertilizer or mulch. We hate weeding, so go the mulch route, using a combo of grass clippings and chopped leaves. That pretty much functions as an in-place compost set up and we have older plants that have never been fertilized. Plus it helps get rid of leaves and grass clippings! 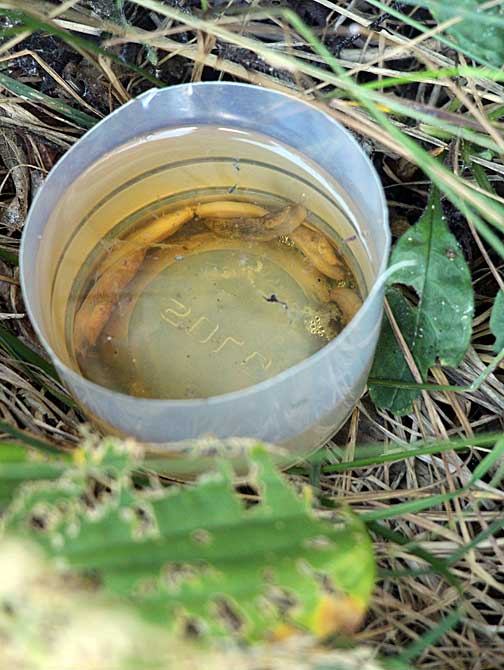 Beer “slug bait” in a cut down cup (but use paper, not plastic)

Does rhubarb suffer from pests?

Rhubarb is a relatively pest-free plant—probably a benefit of being generally toxic!

The pests that do affect it are more likely to damage the leaves which get cut off anyway. If you have a severe enough infestation to hurt the general health of the plant however you may need to address it even if the stalks are fine.

The only time we’ve had this is from slugs which will chomp large chunks out of leaves, especially if weather has been especially wet. I usually use the tried-and-true beer method to address. I cut down paper cups to an inch or two in height, fill with beer and set these around the plants, refilling as needed. After a few days I compost the paper cups full of dead drunken slugs.

For information on other pests see Rhubarb Central. 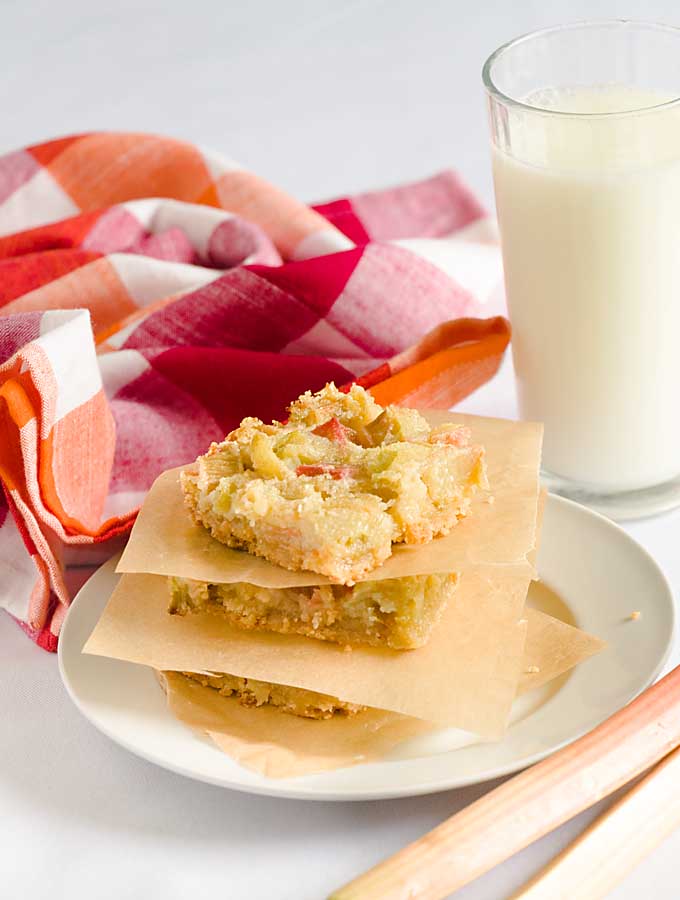 Of course just as good as rhubarb growing tips are rhubarb recipes like these Rhubarb Crack Bars!  Enjoy!