With a simple topping that melts into a beautiful glaze & a press-in crust, this French Pear Tart is a quick, easy & tasty dessert. Vegan option. 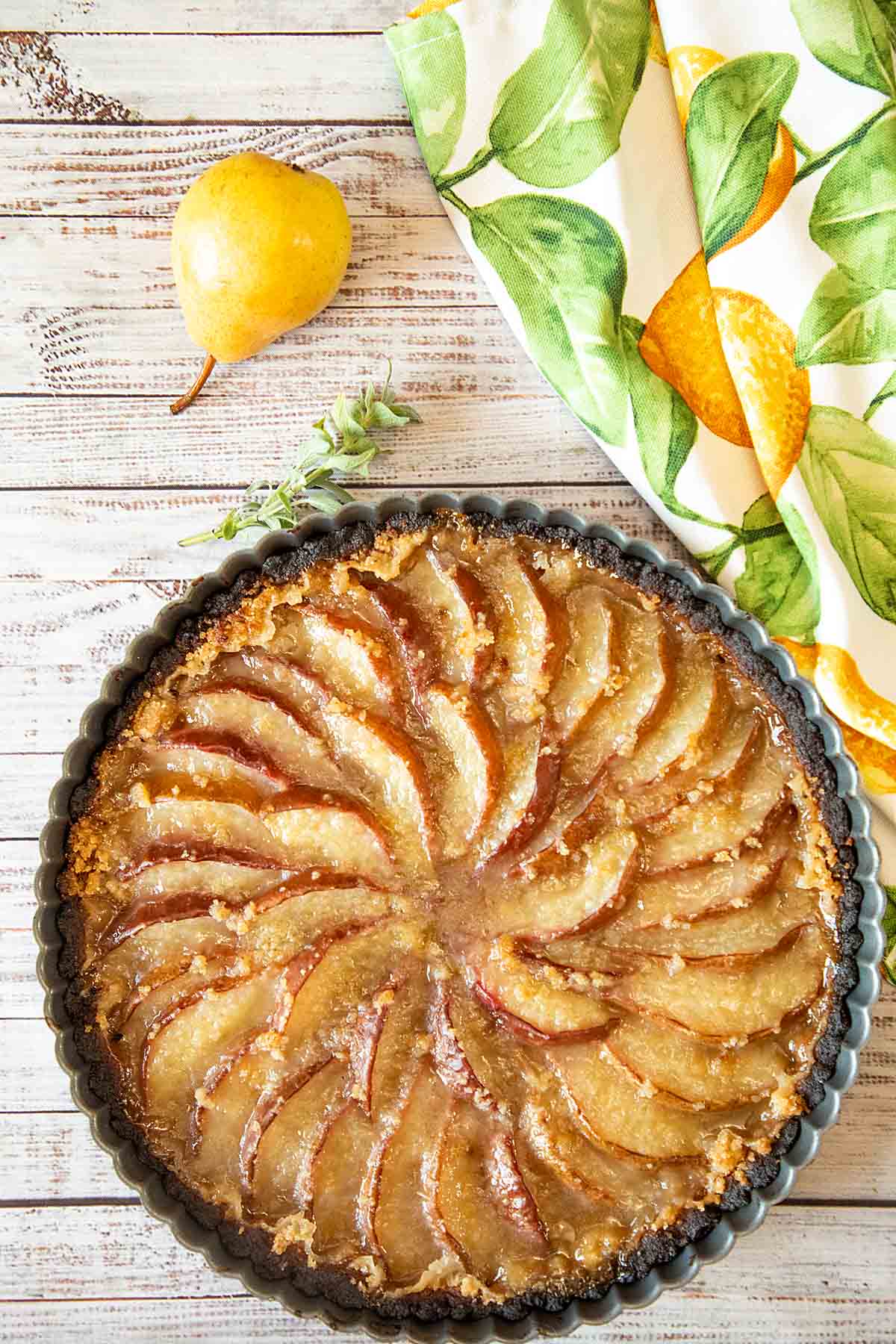 Isn’t it nice when grace and practicality come together seamlessly?  The recipe that this lovely, tasty tart is based on came from Food 52 via a now-closed blog and was billed as a 10-minute tart!  How good it that!   Originally made with peaches, I admit it took me 15 minutes. Still not complaining!

Key to the beauty and simplicity of this dish is the “glaze” that you see on top.  It’s actually a simple crumb mix of flour, butter and sugar, combined (use your fingers if you want) and sprinkled atop the pears.  Then it melts effortlessly into a glistening lush glaze.

How do you beat a perfect shine that requires no brushing of melted jelly! 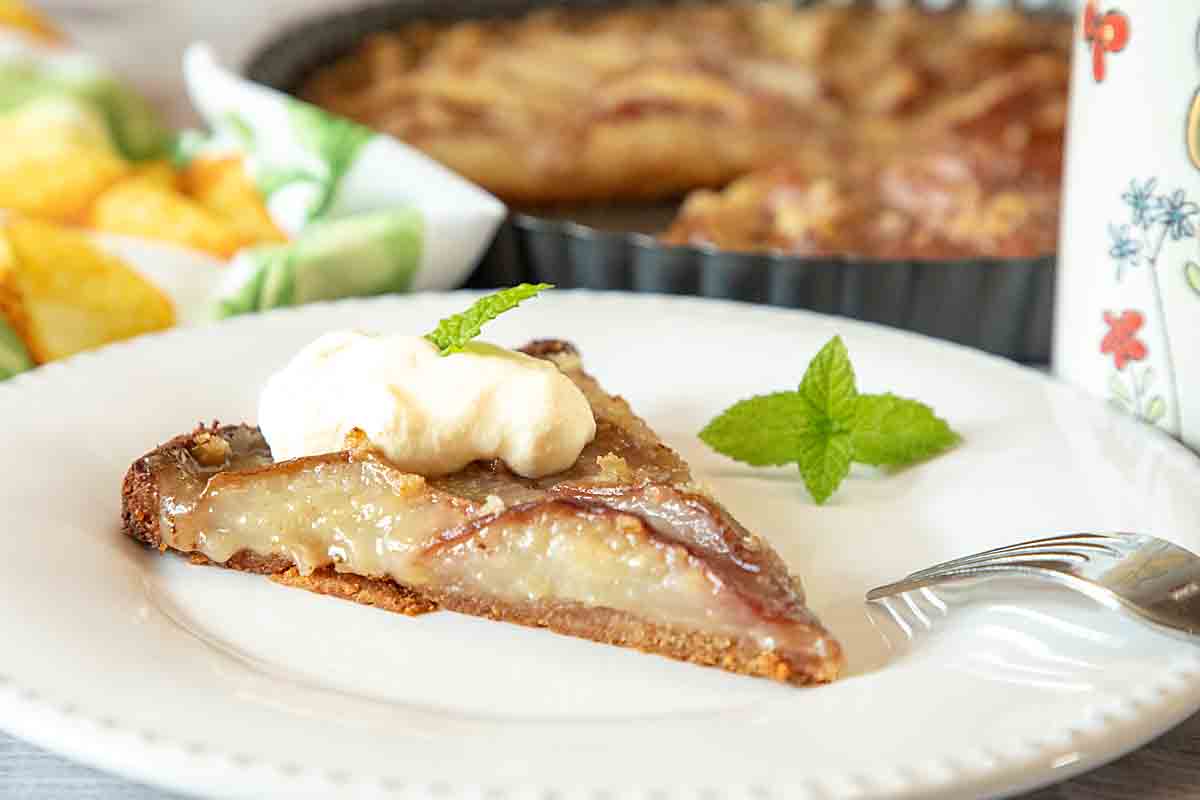 What is a French Pear Tart vs Frangipane or Almond Pear Tart?

While defining a tart may not seem like a difficult question, I am actually more confused now than before I started researching.    If you google French Apple Tart, you will find recipes that are quite similar to my pear tart–except using apples of course.  Sometimes they are very close and sometimes they also add a pastry cream or custard (egg and cream) base.

But looking up French Pear Tart usually (but not always) gives you a tart with pears set in frangipane, a ground almond custard.  And though I love it dearly, I consider frangipane a VERY different recipe–see here for my Pear Frangipane Tart, pictured below. 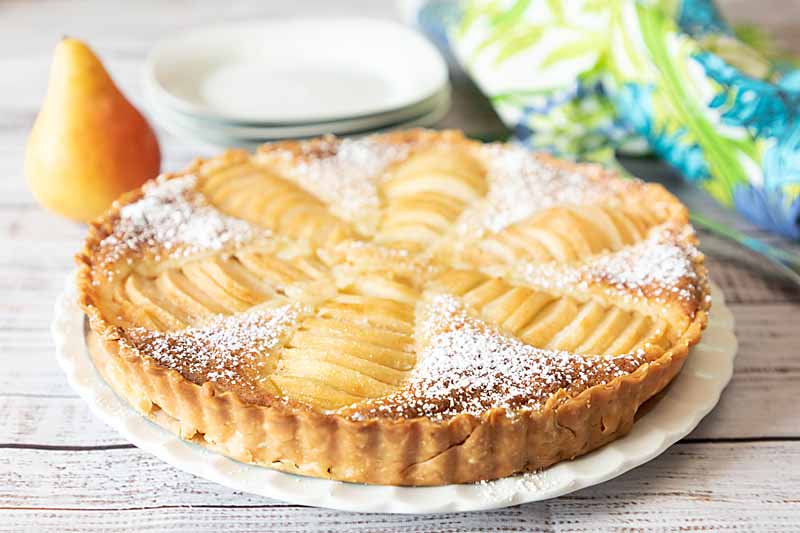 Yes, this is the first time I’ve found that simply changing out the fruit used in a recipe–from the French Apple Tart in this case–results in an identity crisis.  And now I really don’t know what to call this.  Pear Tart, alas, seems simply too generic alone.

So Easy.  I know we bloggers are always saying recipes are easy, but this really, truly is!

Tasty.  I think pears are underrated.  All they need is a simple glaze and they really shine!

Impressive.  With the lovely concentric circles and the shiny golden glaze, people will think you’re a real pro! 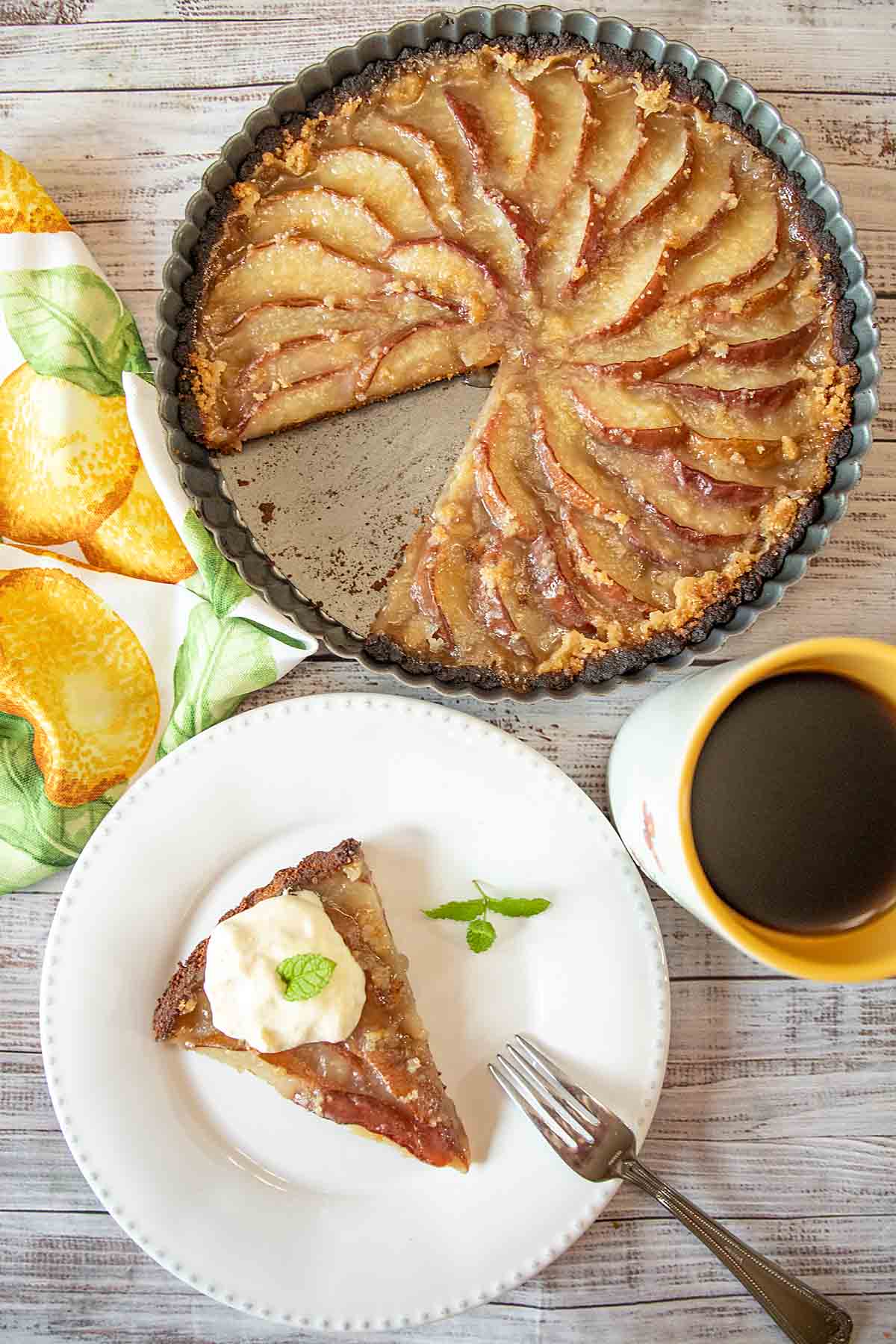 Mix crust ingredients. Press the dough into an 11 inch tart pan till it covers the bottom of the pan and edges up the side. The crust above the “fruit line” tended to brown a lot so going half way up the sides worked well for me.

Mix together  the crumb topping ingredients. 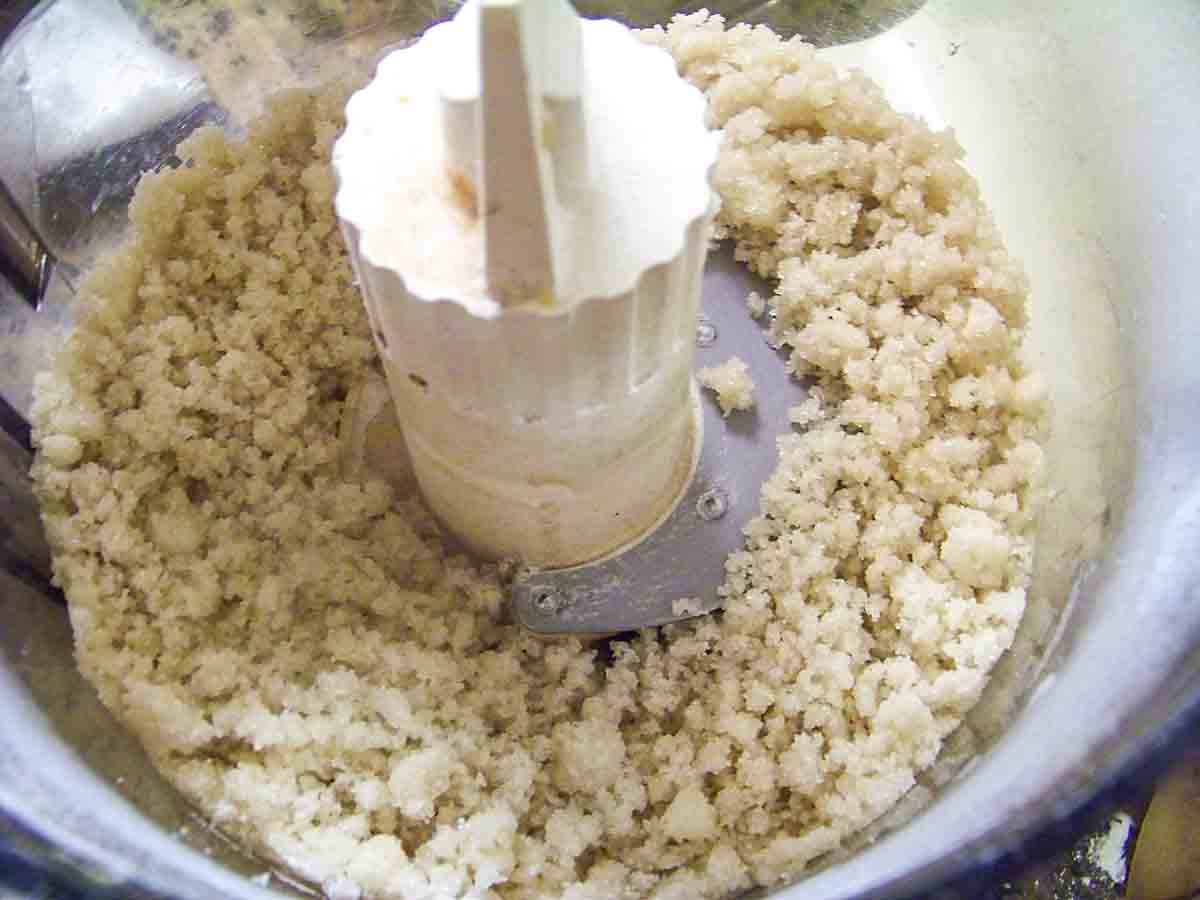 Arrange pears in two circles on the crust, starting on the outside. 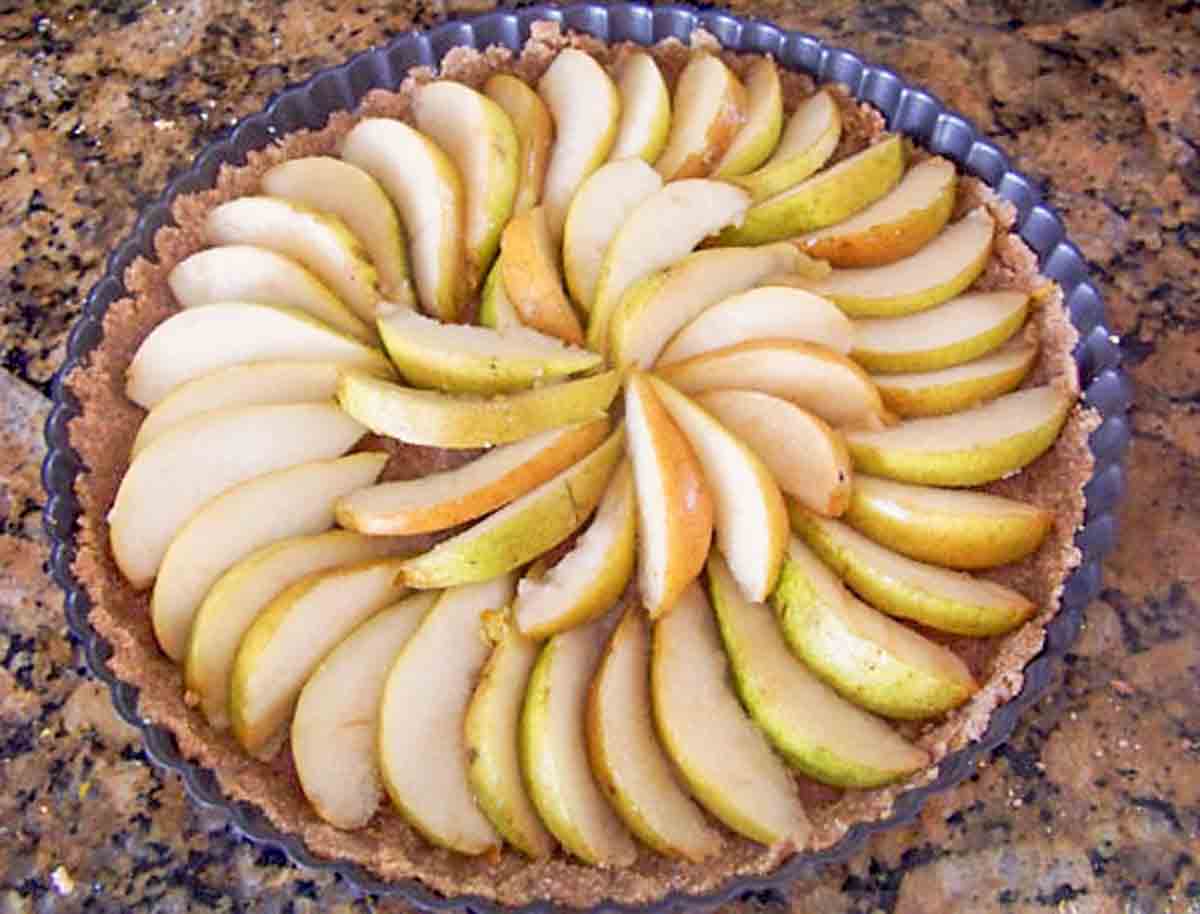 Sprinkle the crumb topping over the top. 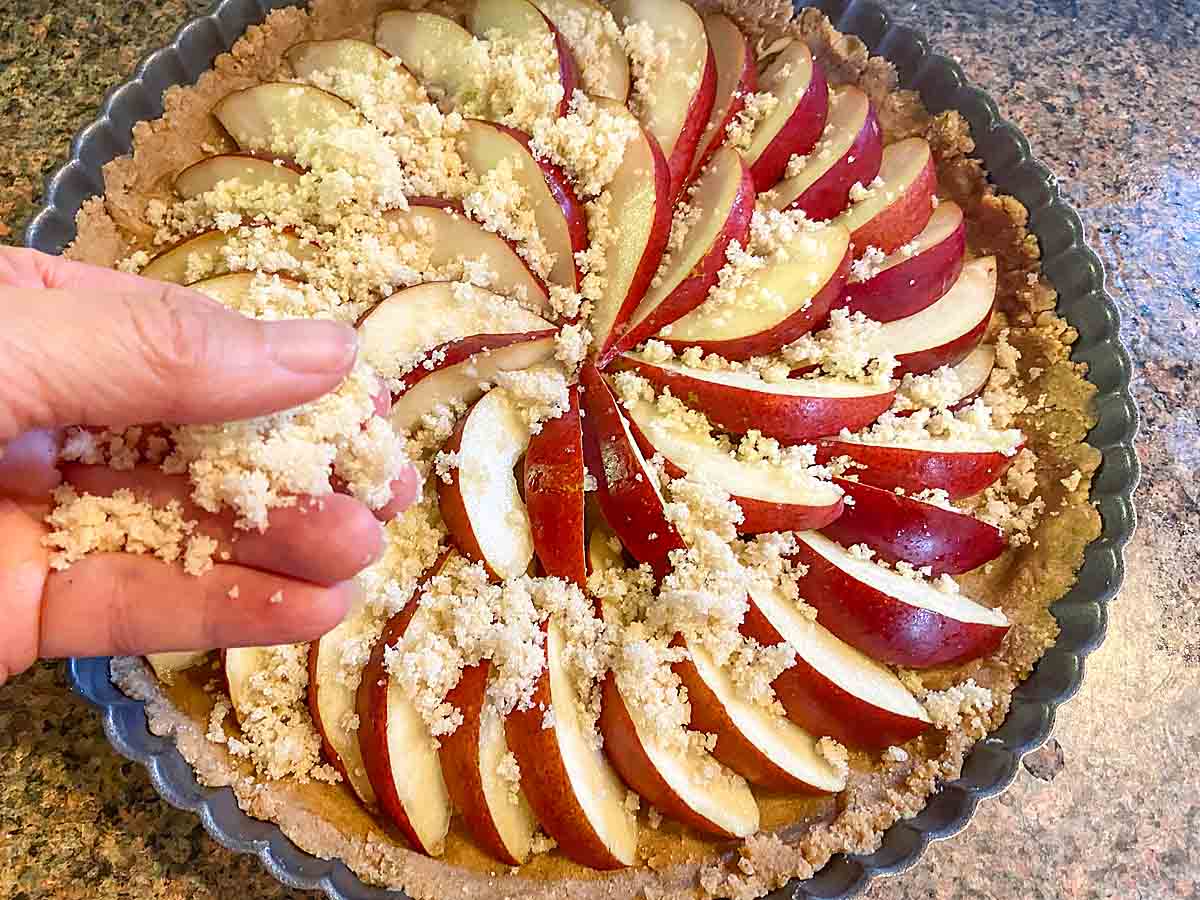 Bake for 35 to 45 minutes, until glaze is shiny and bubbling and the crust is beginning to brown. Cool on a rack. Serve warm or room temperature.

This is a delicious dessert for any dinner or brunch.  I like to top with a dollop of whipped cream.  A mint leaf can be a nice garnish as well.

I’ve brought this to our Thanksgiving buffet and after an absence of a few years, I think it’s time to bring it back. One pumpkin pie, one apple, one pecan, then the sky’s the limit! 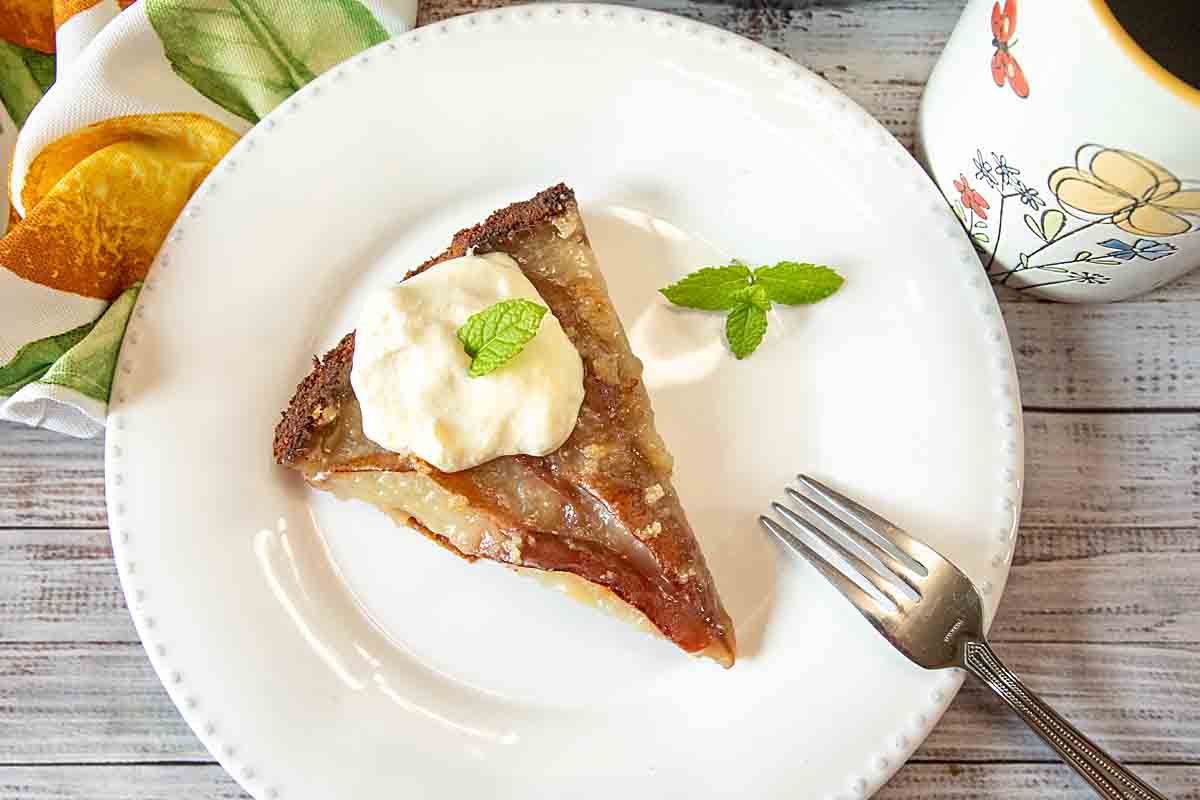 Happily this is already vegetarian and vegan.  To go gluten free you could use your favorite gluten free crust and change the thickener in the topping to a something other than flour.

I’ve also done a version of this as a simple Plum Tart.  For that recipe, the main difference is the addition of linzer spices (cloves, cinnamon, etc) to the crust.  This compliments the more robust flavor of the plums.

Besides plums, I have also made this successfully with peaches–and failed with apples.  The key is that the fruit have enough moisture to help create the glaze.

Now if you’d like to venture into other pear pies, I have a few more suggestions.  Consider my Pear Custard Pie another simple but elegant dessert with sweet pears in an eggy vanilla custard, or this  Drunken Chocolate Pear Tart which is essentially red wine poached pears set into a brownie-like base. 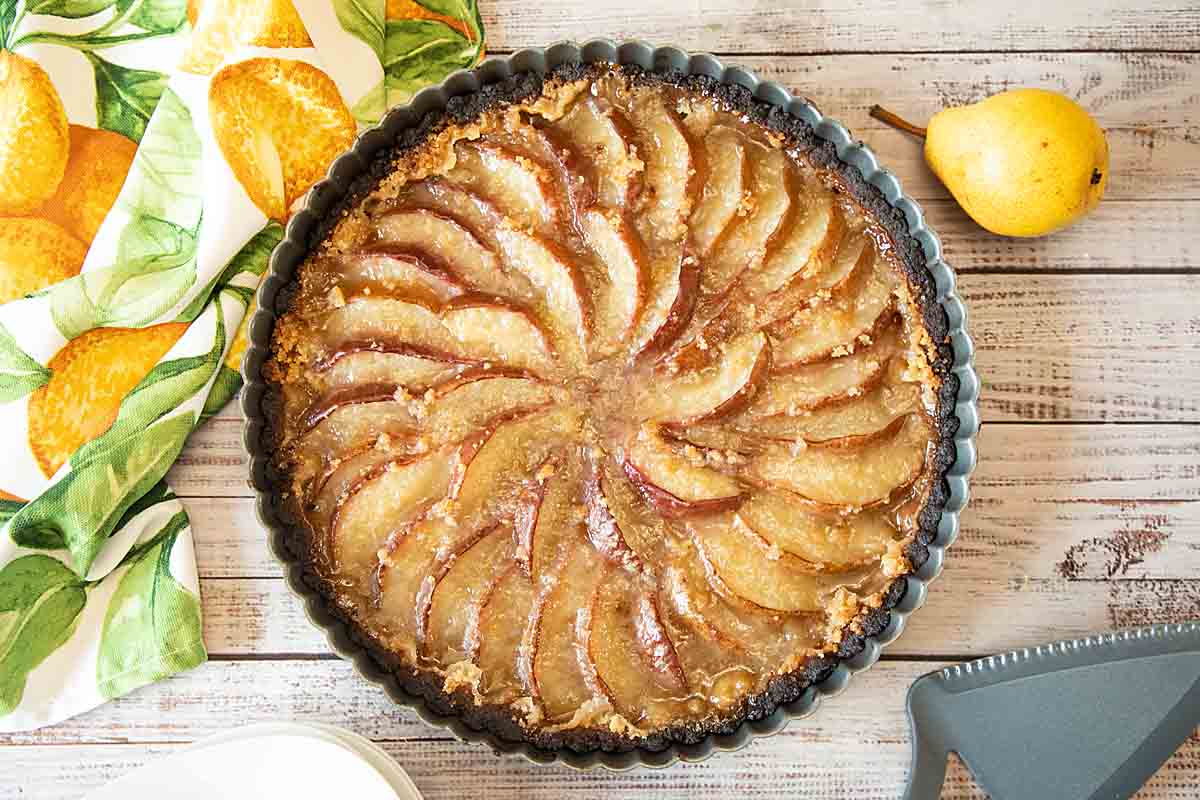 This French Pear Tart is best made the same day you serve it, since it softens some over time. It starts out with a bit of crystallization along the crust that is sweet, crunchy and quite lovely.

For a couple days after, the leftovers are still good (refrigerate after serving). 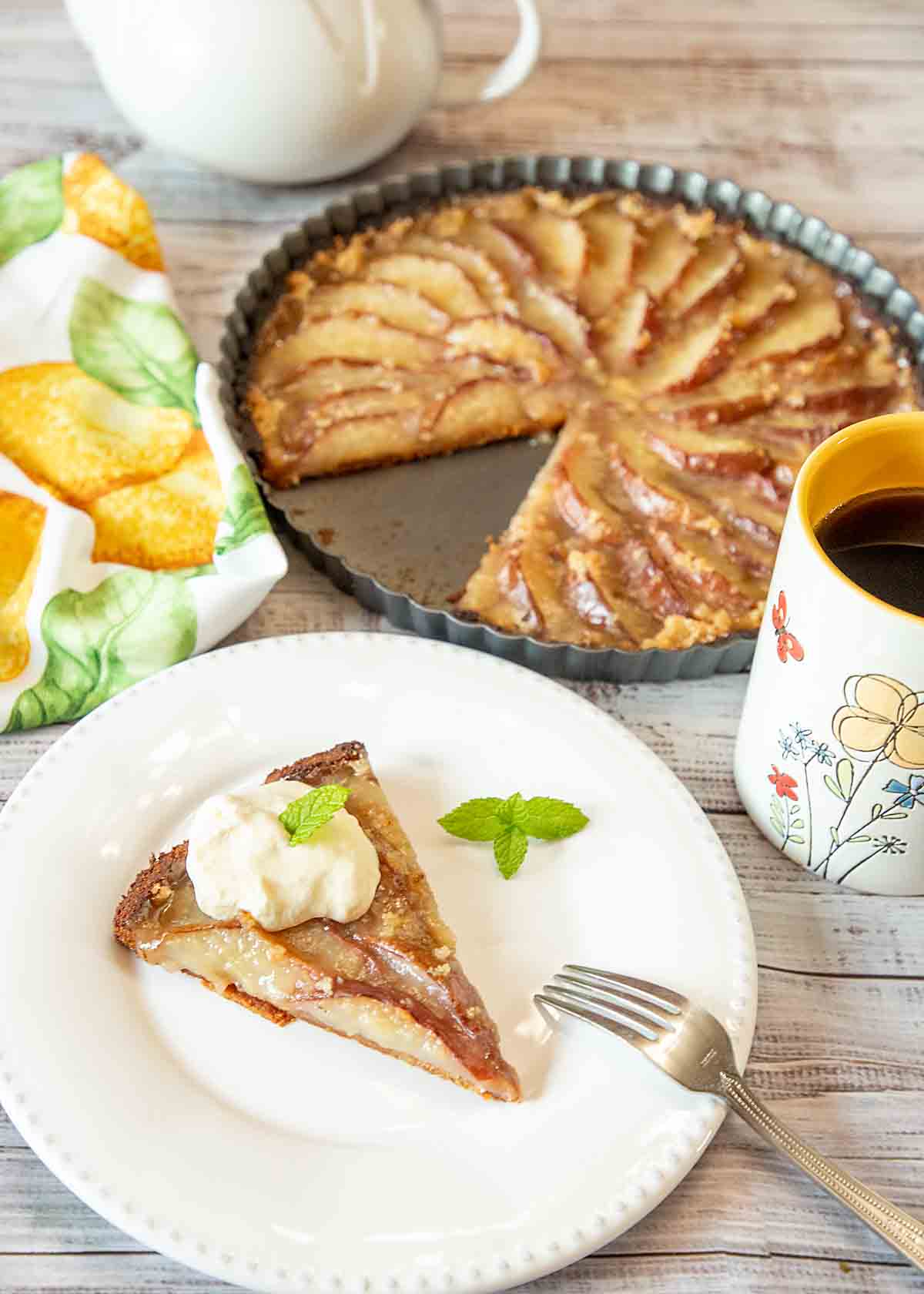 Don’t shortchange your baking time.  That crystallization that I mentioned above requires that the glaze get hot enough (that is bubbly enough).

Do I need to peel the pears?  You can peel the pears if you prefer, but I find them nicely soft in the final tart.  I am a notorious non-peeler, on principle, but even I admit that my Betty Crocker French Apple Pie is a litttle bit better with peeled apples.  But since my kids don’t complain about the peels in this, it really must work.

Be sure to use ripe pears so they have enough moisture to facilitate the creation of the glaze.

And finally, I want to reiterate not to make this with apples because, when I did, the drier apples never released enough juice to form a good glaze.  I know I just talked about the similarity to French Apple Tarts but since my apple version failed, I’m sure there are subtle differences. Perhaps the solution’s as simple as thinner slices and maybe some added moisture (Calvados anyone?) but until I succeed, I wouldn’t want to lead you astray.

Though Calvados has me thinking.  Perhaps a boozy pear tart would be in order…

Preheat the oven to 425. Place a piece of foil or a baking sheet on the lower rack to protect the oven from dripping juice while the tart is baking.

Make the crust. In a mixing bowl, stir together 1 1/2 cups flour, 1/2 teaspoon salt and 1 teaspoon sugar. In a separate bowl, whisk together the oils, milk and vanilla. Pour this mixture into the flour mixture and mix gently with a fork. Press the dough into an 11 inch tart pan with your fingers till it covers the bottom and about halfway up the sides. The crust above the “fruit line” tended to brown a lot so not going to the top worked better for me.

Make the crumb topping. Combine the topping ingredients and mix until crumbly.

Assemble your tart. Starting on the outside, arrange the pear slices in concentric circles over the pastry. Sprinkle the crumb topping evenly over the fruit.

Bake for 35 to 45 minutes, until shiny and bubbly and the crust is beginning to brown. Cool on a rack. Serve warm or room temperature.