With sweet apples, tart cranberries and a crunchy topping, Cranberry Apple Crisp is a tasty fall dessert that is easy to make and perfect for Thanksgiving, Christmas or just snacking! 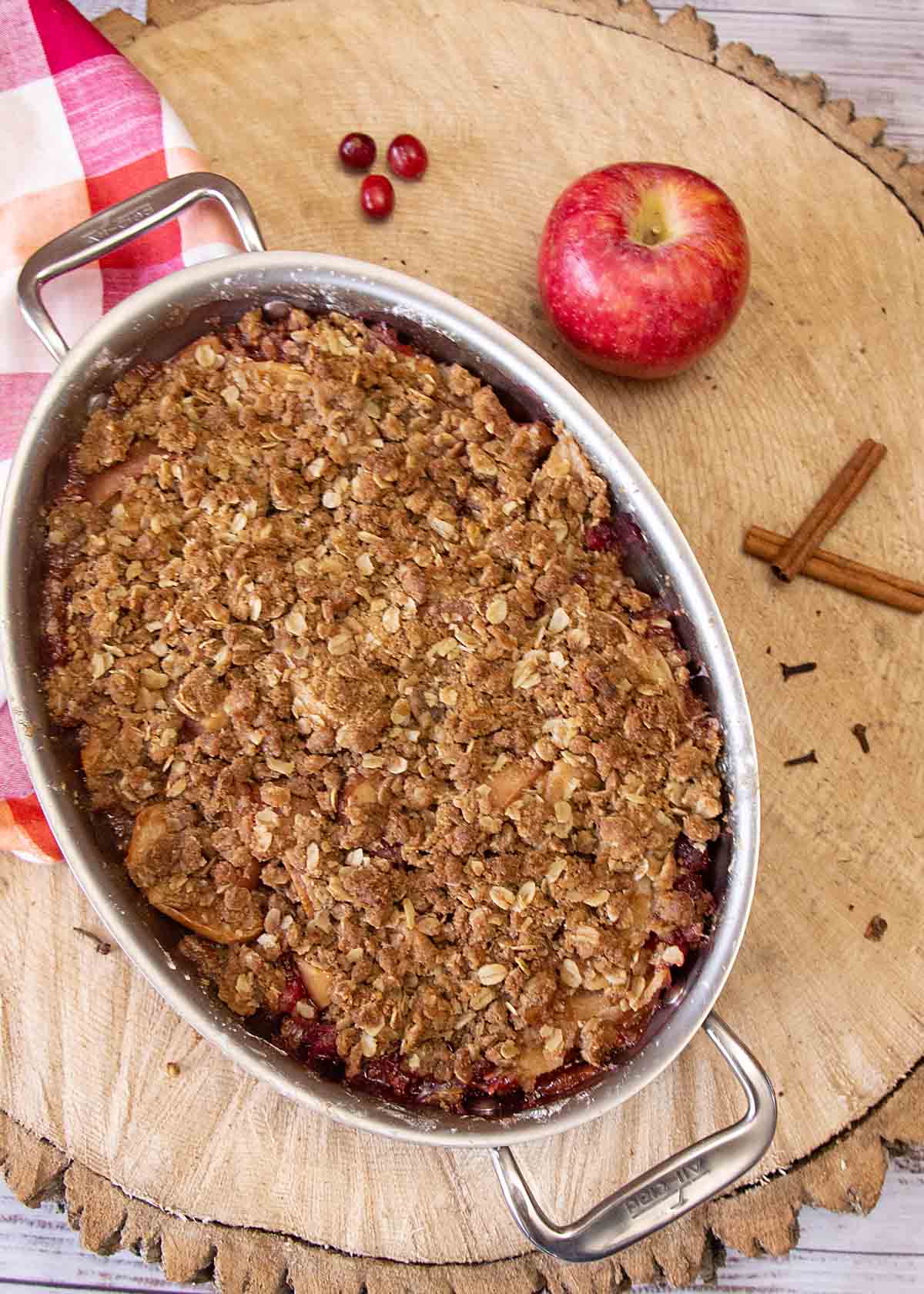 I love fruit desserts! They are such a good way to get joy and nutrition together in a single dish. And if you want easy too, there’s nothing like a fruit crisp. It had been too long since I made a Cranberry Apple Crisp, so I decided to update my 2011 recipe (one of my first!) with new photos and content!

Yes, when you make a fruit crisp, there is no need to roll out a pie crust or worry about crimping the edges or getting a “soggy bottom.” Instead, you just pile fruit into a baking dish and top with a simple crumb topping that you can mix with your fingers.

How easy is that! 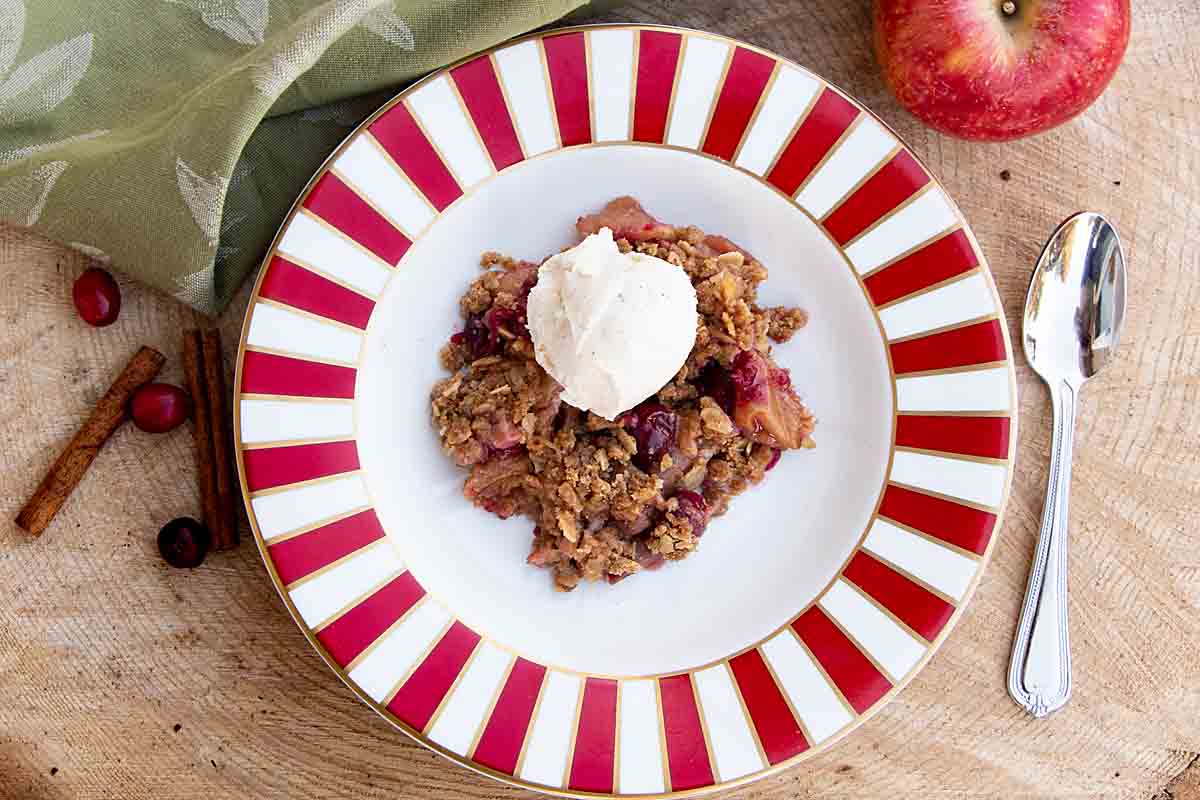 As I mentioned, this is about as easy as a dessert can get. You mix filling ingredients and spread out into 8 inch square (or similar) baking dish. 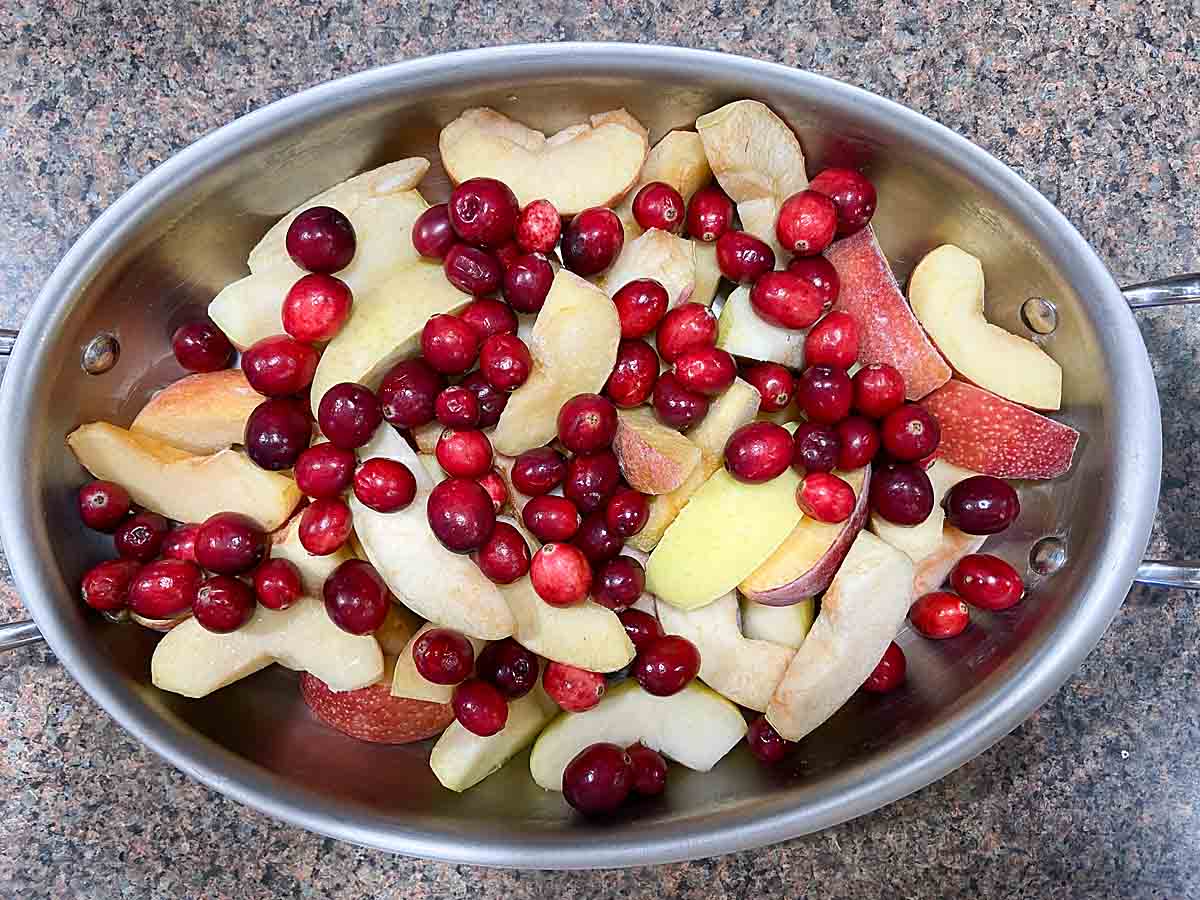 In a separate bowl, mix together topping ingredients. (I use my fingers) 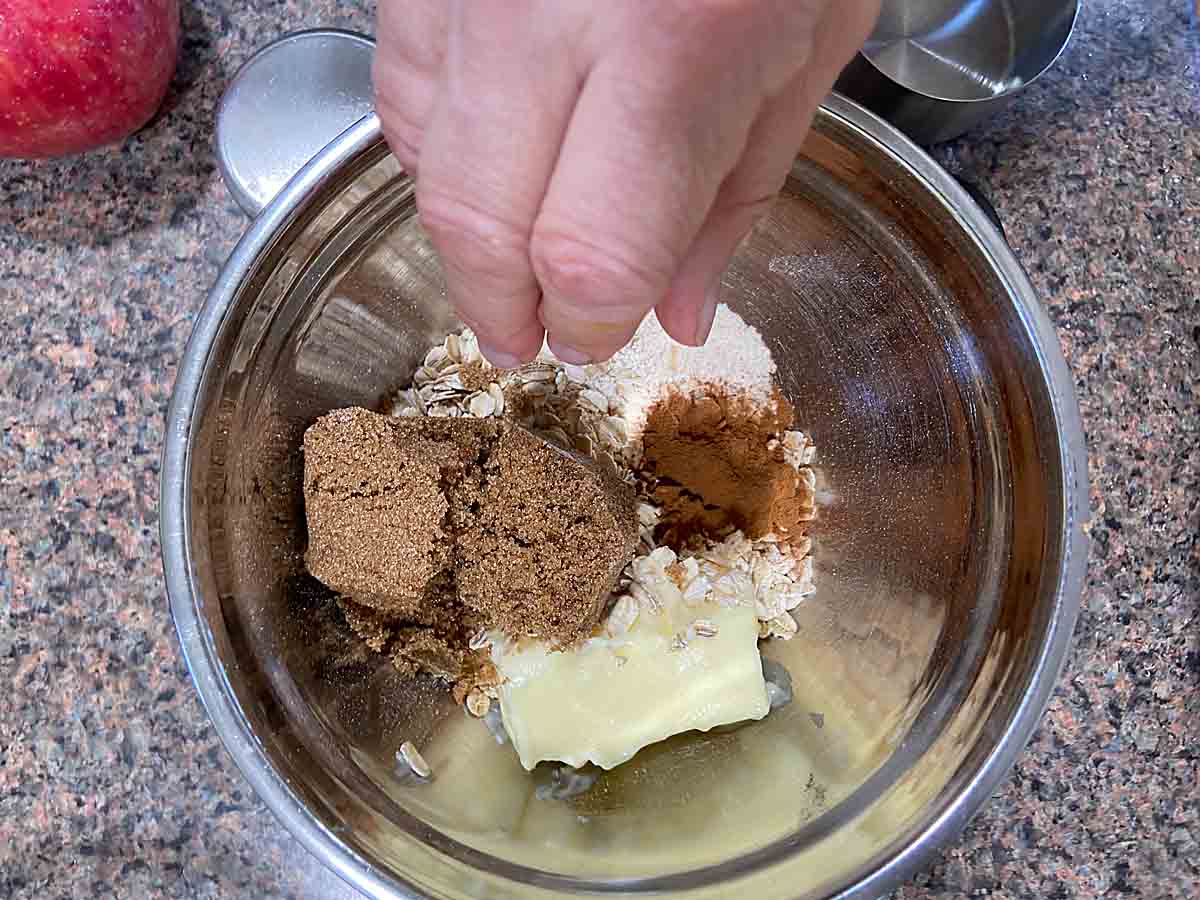 Sprinkle topping evenly over filling. Bake until filling is bubbly on the edges and topping is crisp. Watch for the topping getting too brown and loosely cover with aluminum foil if needed. 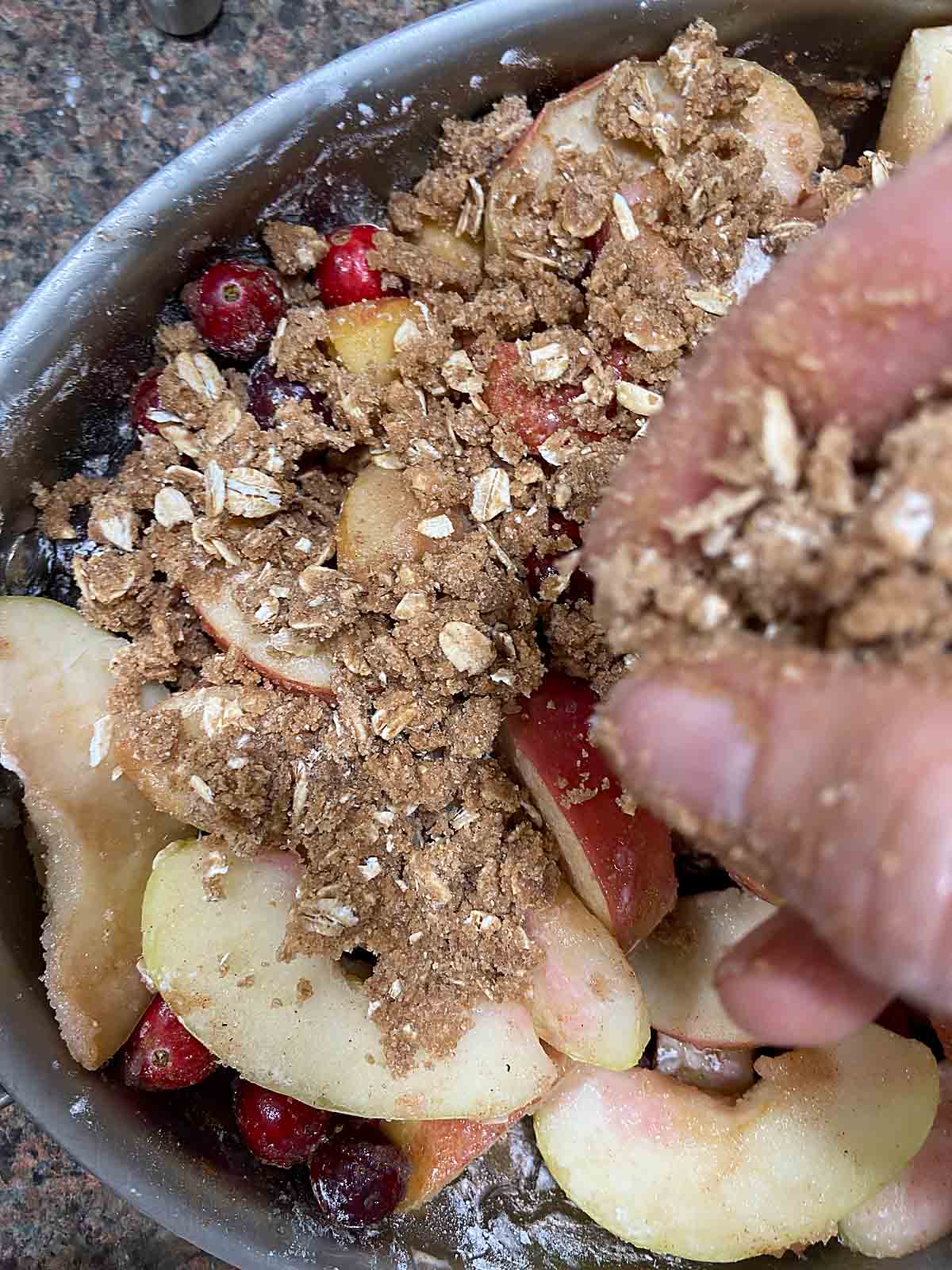 Let rest until cool enough to eat and serve warm or cold.

Apples are such a celebration of fall and come in many beautiful and tasty varieties!

Some people prefer eating apple desserts with crunchier apples and others prefer their fruit meltingly soft. I am in the latter camp.

The variety of apple has an impact on the texture when baked, not just when eaten fresh . So I sometimes consult with a guide like this from Kitchen Lane. If you like apples that keep more texture, you can select an apple that works as a baked apple. For a softer bake, you can go with varieties that are good for applesauce.

In either case I recommend using more than one variety which will help you achieve a good flavor balance. But in the end, I’ll use anything I have—apples are just good! 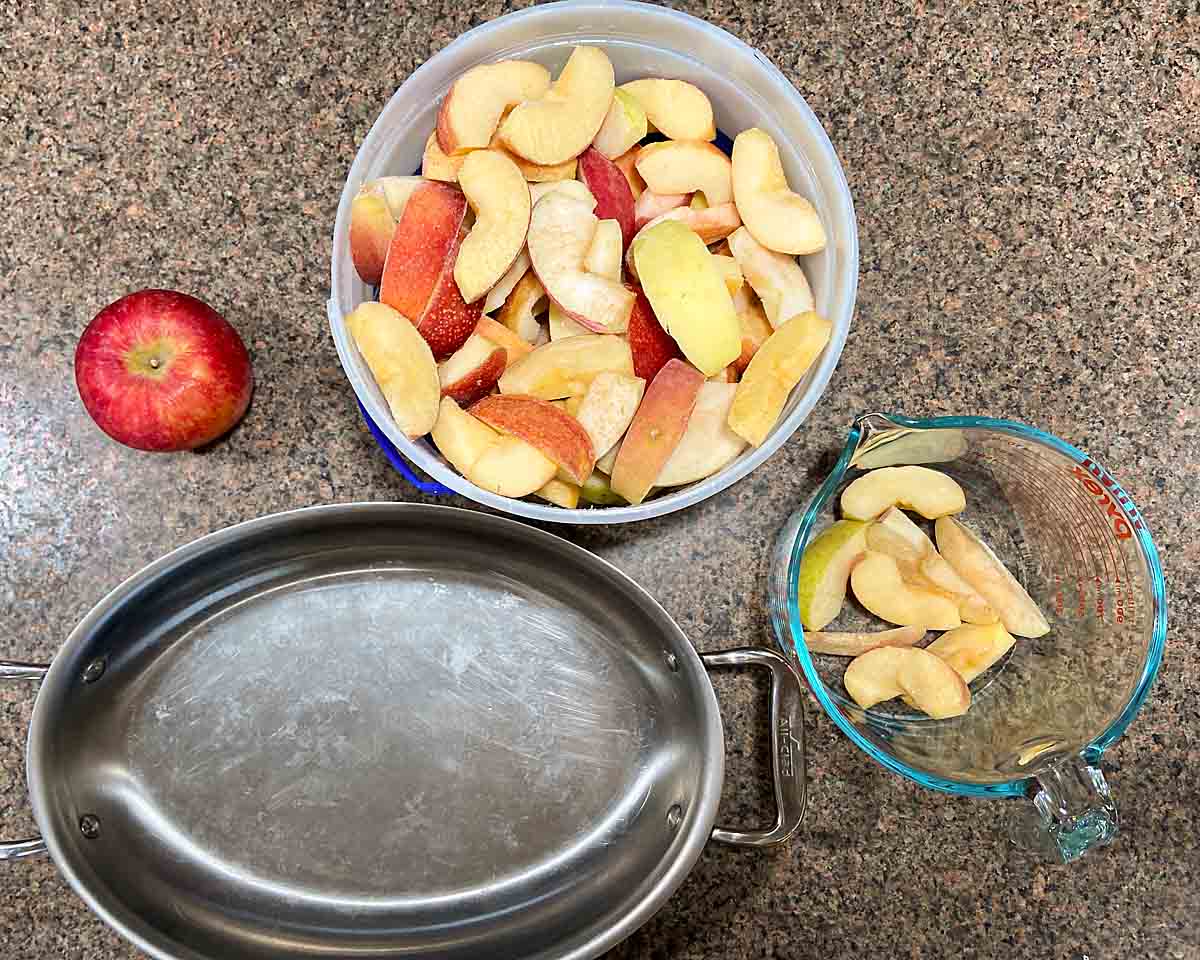 Do I need to peel the apples? My picky daughter hates it, but I don’t peel my apples. I always use organic and there is a lot of nutrition in the peel. Plus not peeling is a huge time saver and means less food waste! It’s strictly a matter of personal preference but if you don’t peel I suggest cutting the apple slices in half crosswise so they are more bite-sized when you scoop up a forkful.

Can I use frozen apple slices? Every fall I core and slice apples and freeze the slices individually on a big tray. Once frozen, they go into a reused gallon ice cream tub and I have local apple slices for recipes all year round. For best results, don’t thaw frozen fruit before using unless your recipe suggests otherwise.

Should I use organic apples? Since apples are commonly on the EWG Dirty Dozen, I prefer to use organic. But remember that it is generally considered better to eat a conventional fruit than to not eat a fruit at all! 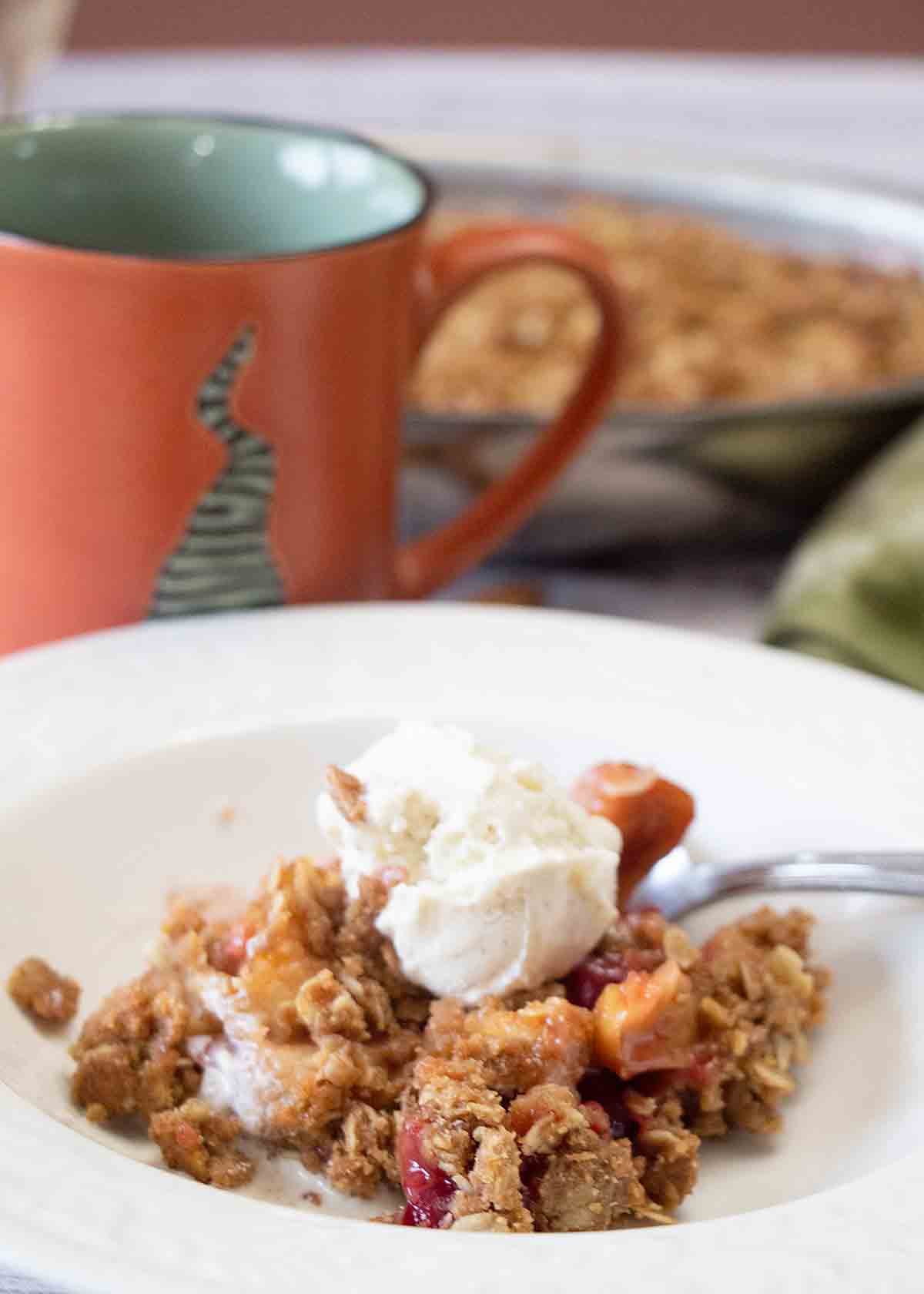 A square baking dish is one of your most common options for a fruit crisp. The oval baker that I used today has roughly the volume of an 8 or 9 inch square pan, so the recipe amounts should work for either.

The first time I made this, I made it in a pie dish. As long as your pie dish is fairly deep, this is another good option. My pie dish worked with about 4-5 cups of apples (slightly less that this recipe) but you can check out how much fits in your dish before committing. The rest of the ingredient amounts don’t need to change for a small change in the number of apples. 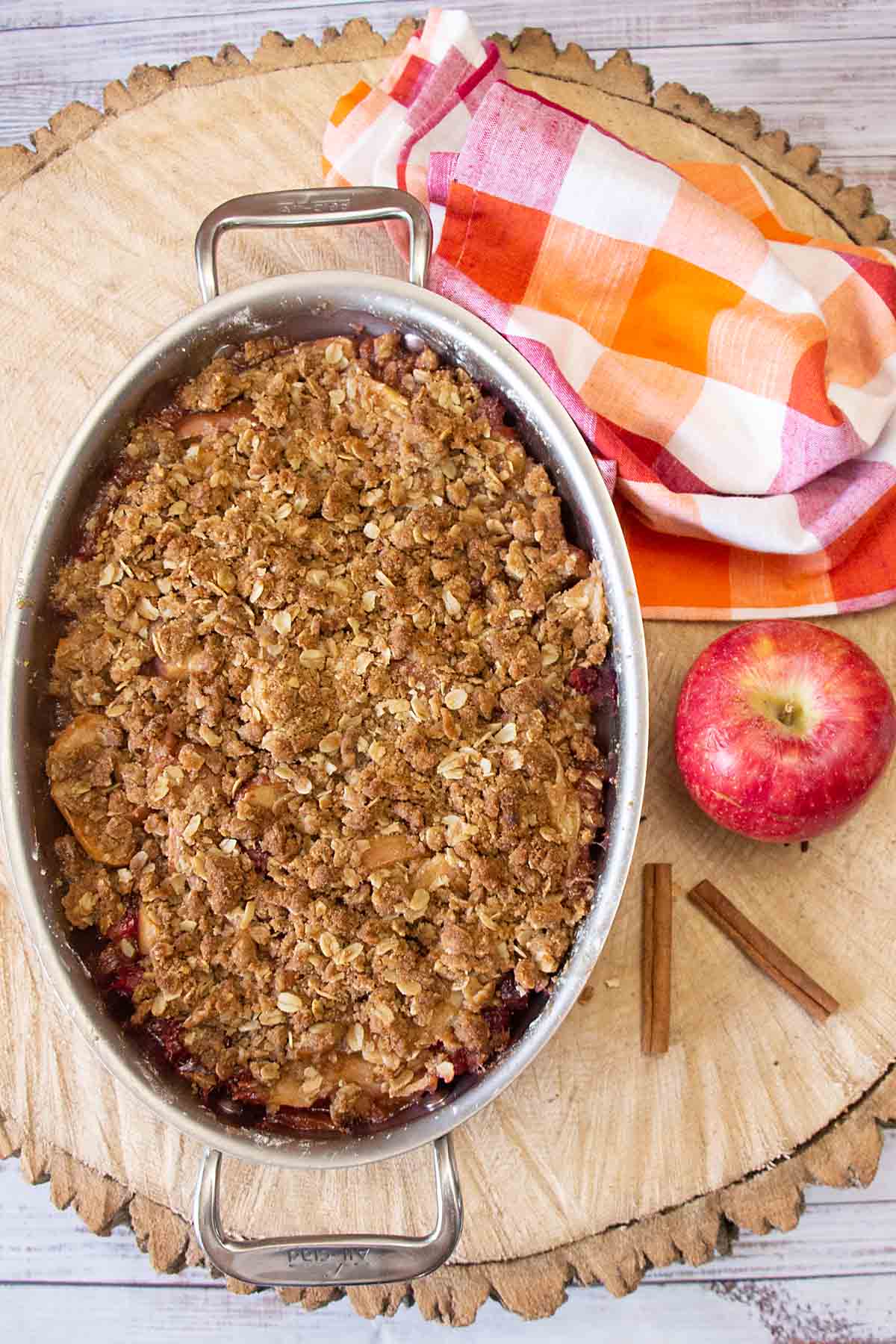 Sometimes people will make their Cranberry Apple Crisp in a cast iron frying pan, which is pretty for serving. An 8 or 9 inch frying pan would work for the amount of ingredients here.

Whatever baking dish you choose, remember that the apples will melt down some during cooking. I generally try to go level with the top of the baking dish to allow for this. Then I put a pan under the baking dish while it’s in the oven, just in case any juices bubble out. 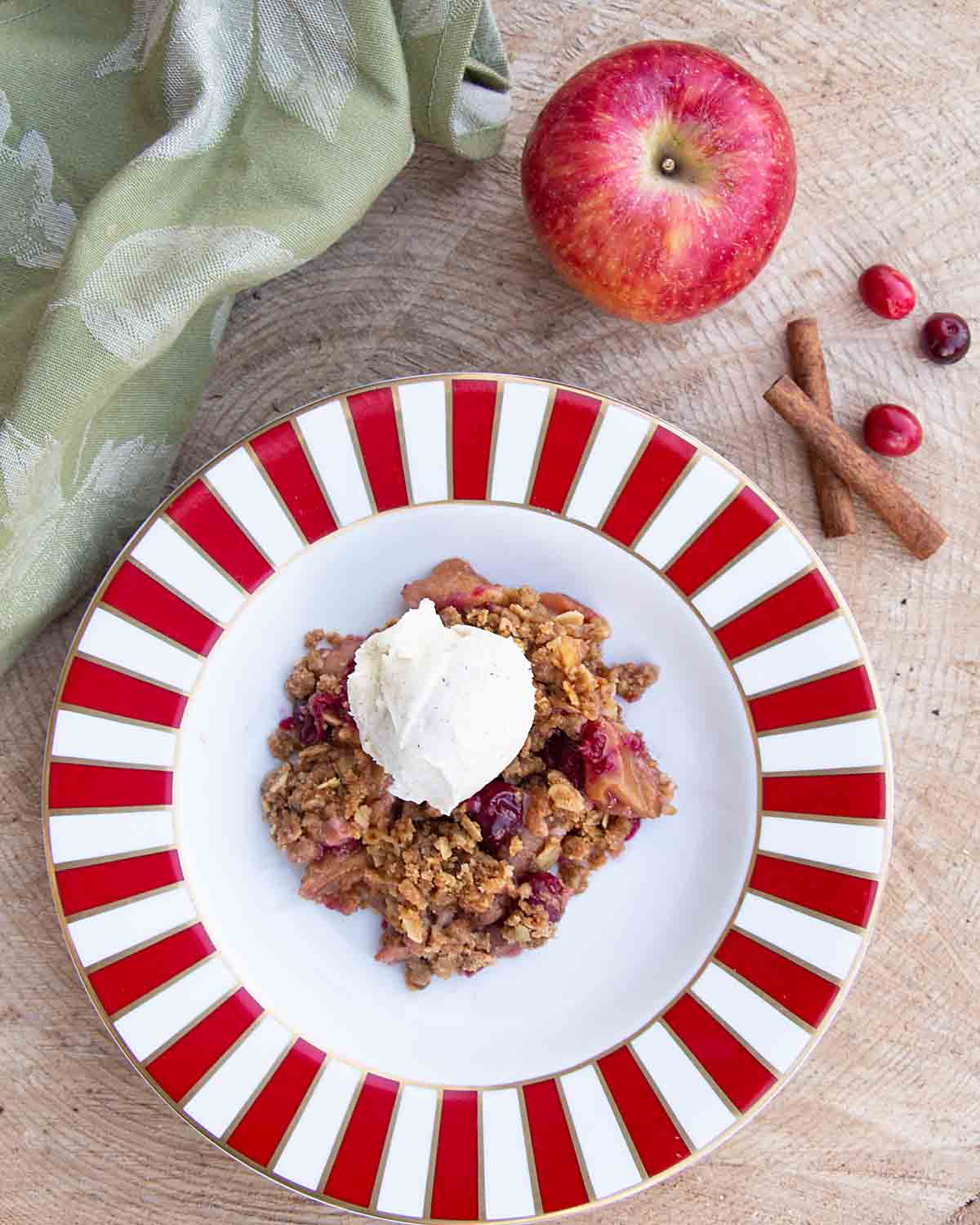 What is a Fruit Crisp Versus a Crumble

As I researched this recipe, one question I had was the difference between crisps and crumbles.

The first source I found was Canadian Living which said “ Similar to a crisp, a crumble is a baked fruit dessert with a layer of topping. A crumble topping rarely includes oats or nuts, and is instead usually a streusel-like combination of flour, sugar and butter.” So their “crumble” topping would be something like mixture of sugar flour and butter on my (really popular) Betty Crocker French Apple Pie.

But this didn’t sit quite right with me and I had to wonder if common usage agreed. I checked out the current 1-10 “apple crumble” recipes in google search. As of this writing, 5 had oats, 1 had pecans and 4 had neither. 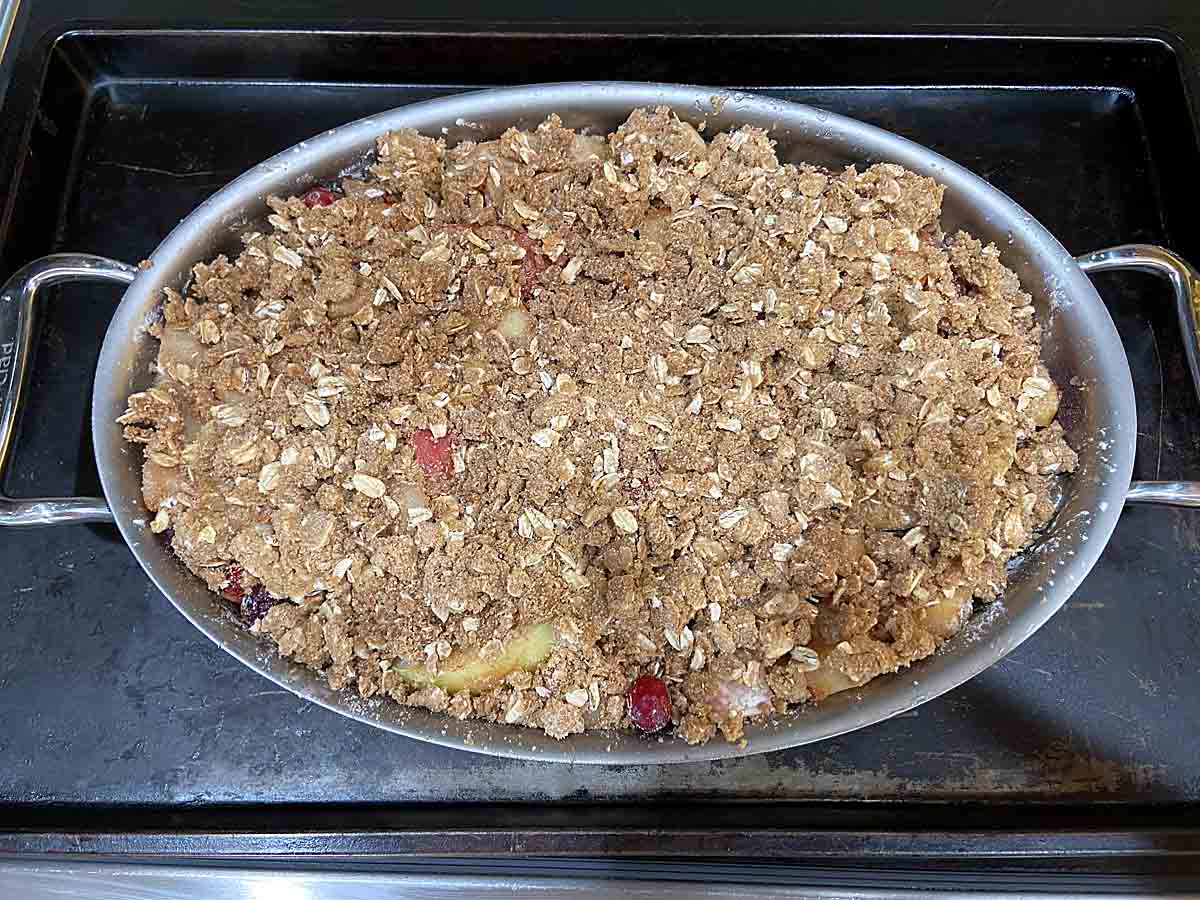 So I searched for another definition, this time landing at Bon Appetit. They said “A crisp and a crumble are incredibly alike, the differences between them either argued over or discounted entirely, depending on where you turn. Regardless, the topping that sits on the baked fruit is crispy and crumbly.”

So for the short answer, the terms are (more or less) interchangeable.

Of course, there are many other tasty fruit desserts that do have differences. Check out Cobblers, Brown Bettys and more in the article I wrote for Mother Earth Living. 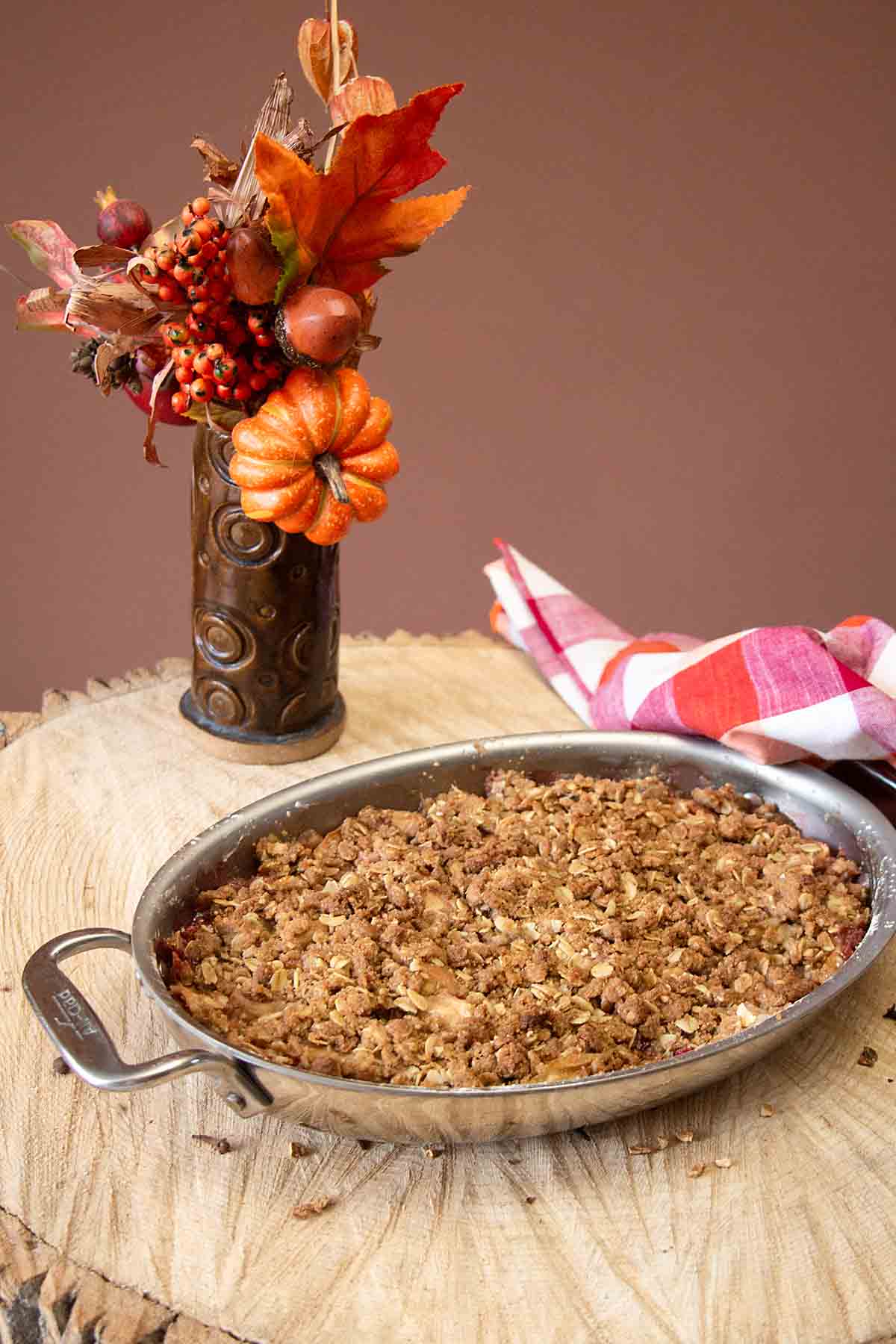 This Cranberry Apple Crisp is so tasty you can eat it just as is! But I think serving it warm with a scoop of ice cream really puts it over the top. I reheat leftovers in the microwave if they have cooled off. Whipped cream is another delicious topping.

You can use fresh or frozen cranberries for this. And no chopping is needed.

I use cinnamon in both the apples and the topping to layer my flavors. Feel free to add additional spices if you like, such as cloves or nutmeg.

Over the course of baking this, the topping may start to get too brown. If this occurs, set a piece of aluminum foil lightly over the pan. And BTW, don’t try to get a jump on stopping any over browning by using foil from the start–this stops it from crisping properly.

Recently I had to do a gluten free version of this and it converted pretty easily.  I made the topping with almond flour instead of the wheat flour and reduced the butter by 2 Tablespoons (due to the extra oil in the almond flour).  You would also need to be sure your oatmeal is gluten free and that you thicken with tapioca or cornstarch rather than flour. 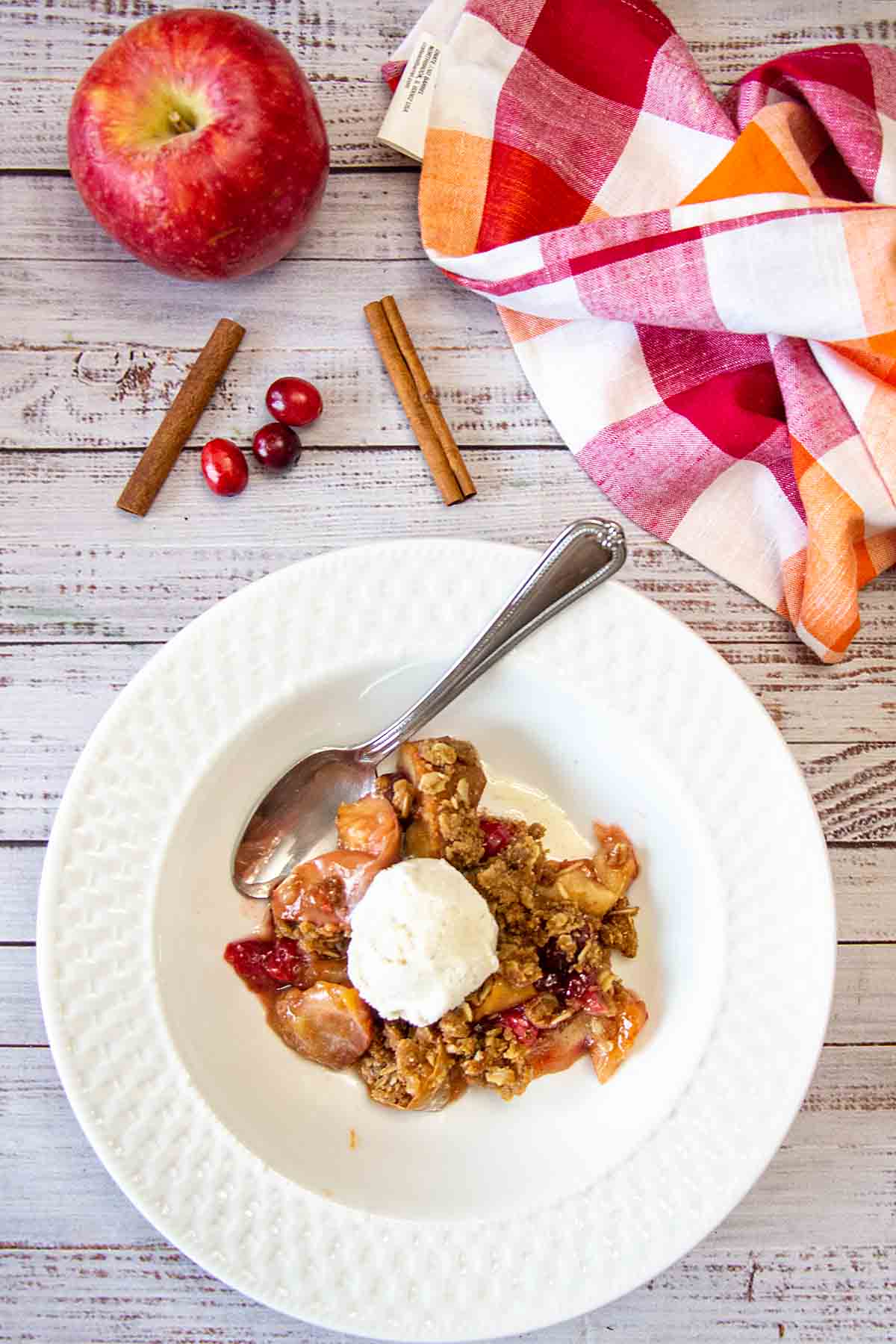 Mix filling ingredients and spread out into 8 inch square (or similar) baking dish.

In separate bowl, mix together topping ingredients.  (I use my fingers.) Sprinkle topping evenly over filling.

Bake at 375 F until filling is bubbly on the edges and topping is crisp, about 30-40 minutes.  Watch for the topping getting too brown and loosely cover with aluminum foil if needed.

Let rest until cool enough to eat and serve warm or cold. Cover and refrigerate leftovers.

To make this gluten free, I have had success making the topping with almond flour instead of the wheat flour and reducing the butter by 2 Tablespoons (due to the extra oil in the almond flour).  You would also need to be sure your oatmeal is gluten free and that you thicken with tapioca or cornstarch rather than flour.