Did you ever want to have an herb garden–or maybe just a potted plant or two?  If so, take a look below at the information on some popular herbs!  Thanks to Nino Ridgeway and her great class for many of the tips!

There are many herbs that are great for cooking, as well as some that are just ornamentals.  Here are some long time favorites! 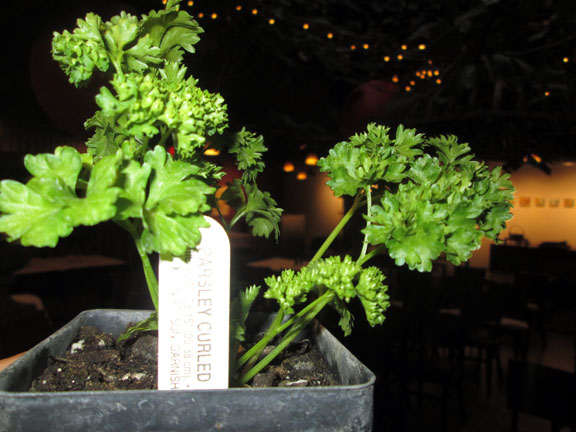 I always thought of parsley as a relatively boring herb, better suited for garnish than cooking.  But the first time I tasted Parsley Boiled Potatoes, I was a convert–how much difference can a little parsley make!

Cultivation:  Soak seeds for 24 hours before planting.  Discard seeds after one year.  Fairly winter hardy and will last outdoors part way into our chilly Wisconsin winters. 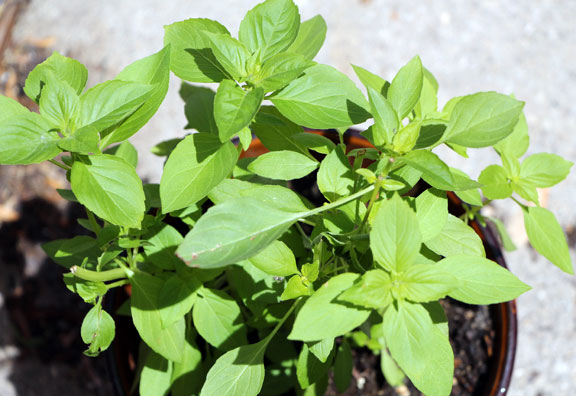 Basil in the classic pesto herb (though cilantro, arugula and other herbs work great too).  I freeze mass quantities of pesto every year to get me through the long cold winters and love adding it to a Tomato Feta Salad every fall!

Cultivation:  Basil hates cold even more than most herbs so wait to plant until nights are consistently over 50.  According to Nino, basil may “sulk all summer” if it gets too cold in the spring ;-).   Seeds last 4-5 years, though some varieties won’t grow from seed.  Needs lots of nitrogen so fertilize once or twice over the summer. 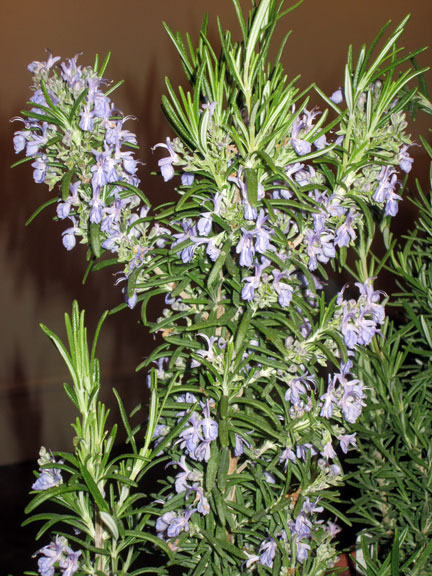 Rosemary is another herb that can make potatoes sing!  Try roasting potatoes with rosemary when you have the boring potato blues!

Cultivation:  Rosemary is a tender perennial and doesn’t like to be pot bound.  It is hard to grow from seed so take cuttings or buy plants.  In cool climates, may overwinter indoors in a cool brightly lit spot–don’t fertilize or water too much during dormant period from November to mid-February.  (I have also seen rosemary survive in pots that are buried then covered with thick quilts even in chilly Wisconsin.)

Cooking Notes:  Use sparingly until you are used to cooking with fresh rosemary.  Good with meat and poultry, potatoes, breads, soups & stews. 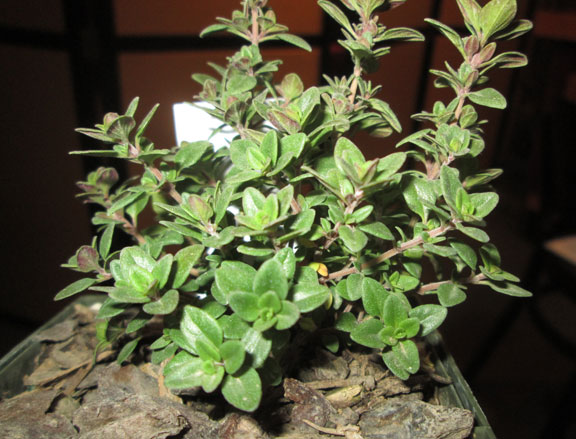 This year I started cooking a lot with fresh thyme.  From Sun-dried Tomato and Spinach Quiche to Roasted Vegetable Galette to tossing it into dishes willy-nilly, it is one of my “go to” herbs for jazzing up a new recipe!

Cultivation:   Other than lemon thyme the culinary varieties of thyme can be grown from seed.  Many (but not all) are winter hardy as far north as zone 4.  Thyme can also  be overwintered indoors.

Harvest:  Harvest regularly in small quantities to encourage growth.  Do not remove more than 1/4 of the leaves in the fall or the plant will not survive the winter.

Varieties:   There are many varieties, some of which are ornamental only.  Ornamental thyme must be grown from division or cuttings.  Popular culinary varieties include German thyme, lemon thyme, and French thyme (less winter hardy).

Cooking Notes:  Can be used dried or fresh in cooking.  Good for soups, stews, salads, breads. 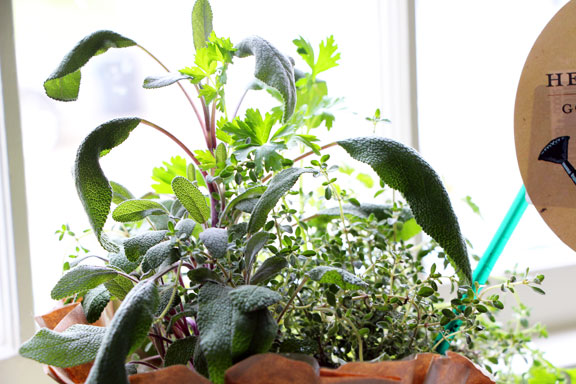 Sage in the front of a pot of popular herbs

The best chicken soup I ever had was dense with vegetables and full of the robust flavor of sage, served for Thanksgiving at my mother’s retirement community.  Hmmm, I wonder if they would give out the recipe…

Cultivation:   Hardy in zones 4-10, sage can grow into a small shrub-like plant.  Some “sage” is not actually sage, for example, the popular flowering plant Russian Sage, is actually a member of the mint family.

Harvest:    Sage blooms on the second year wood, so the usual pruning directions don’t apply.  It should be cut after it blooms in July. 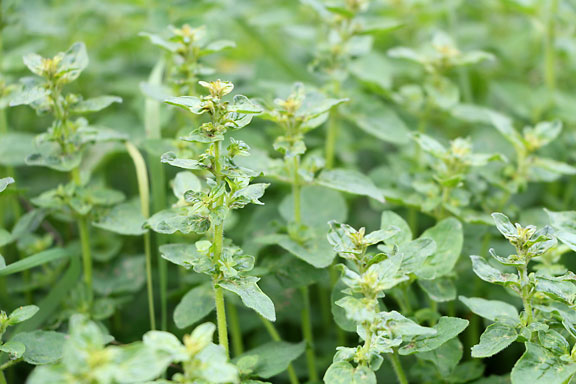 Oregano, one of that popular herbs that has perennialized in our garden

Cultivation:  Most oregano is hardy to zone 5, with some tendencies to invasiveness.  I can testify that mine completely overpowered the thyme, I planted next to it!  But it has survived over a decade outdoors through some bad Wisconsin winters.

Harvest:  Harvest regularly and cut it back hard in June when it starts to flower.

Varieties:   Nino feels that the best cooking variety is Greek oregano.  Some varieties have little flavor and are grown as ornamentals.

Besides these popular herbs, there are many more that are a delight to work with.

Nino commented that if she doesn’t know what herb to add, she will often use marjoram.  It is considered a tender perennial (USDA zones 7-9) and I kept this alive all last winter in a pot, using it in a delicious braised chicken dish and beef stew. 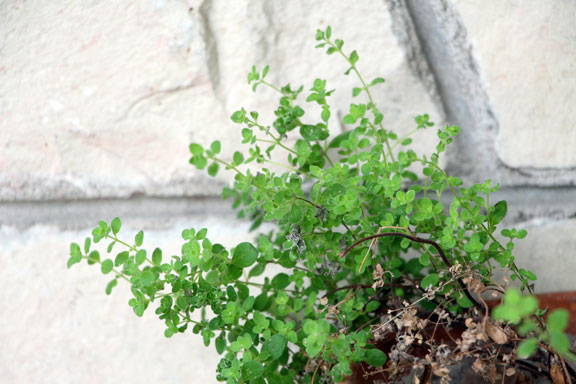 Mint comes in many flavors but can be invasive, so consider growing in containers.  Every year, we overwinter peppermint in the garage where it dies down, then pops up faithfully when spring arrives.  One year I grew a stevia plant next the mint and we could do sweetened tea in one snip of the scissors! 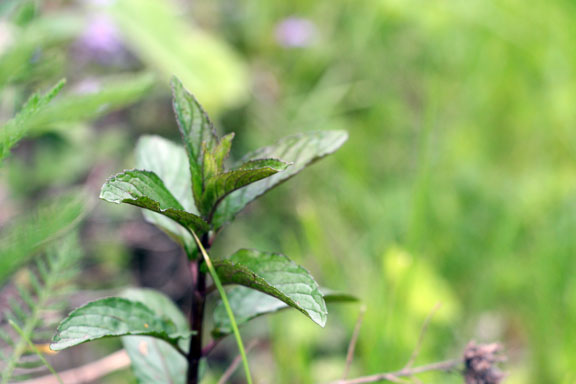 A peppermint plant making a run for it across the lawn

Cilantro and dill both bolt (get leggy and go to seed when they get uncomfortably warm) easily.  Despite my love of both of these herbs, I am letting my CSAs grow them for me (Nino recommends planting in succession, that is starting new plants every few weeks.)  Dill seeds are considered more flavorful than the leaves and flowers and as such are an important ingredient in most “pickling spice.” 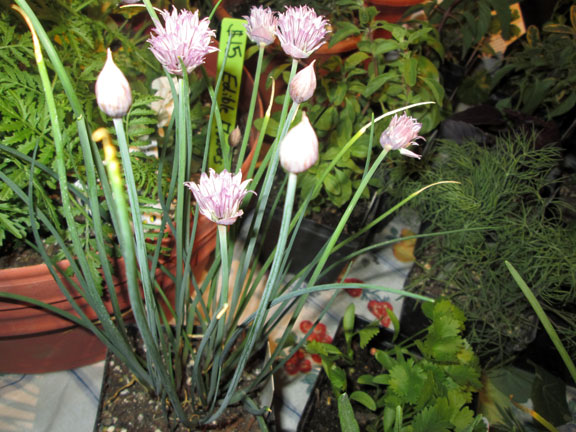 Chives blossoms are a great addition to homemade wine vinegar, as are many other herbs.

No green thumb–or too busy for gardening?  Fresh herbs are so readily available that there is no excuse not to take advantage.  Me?  I should have bought stock in the herb growers who supply fresh herbs to grocery stores–even more inspiration for growing my own now!

25 thoughts on “Popular Herbs for Growing and Cooking”