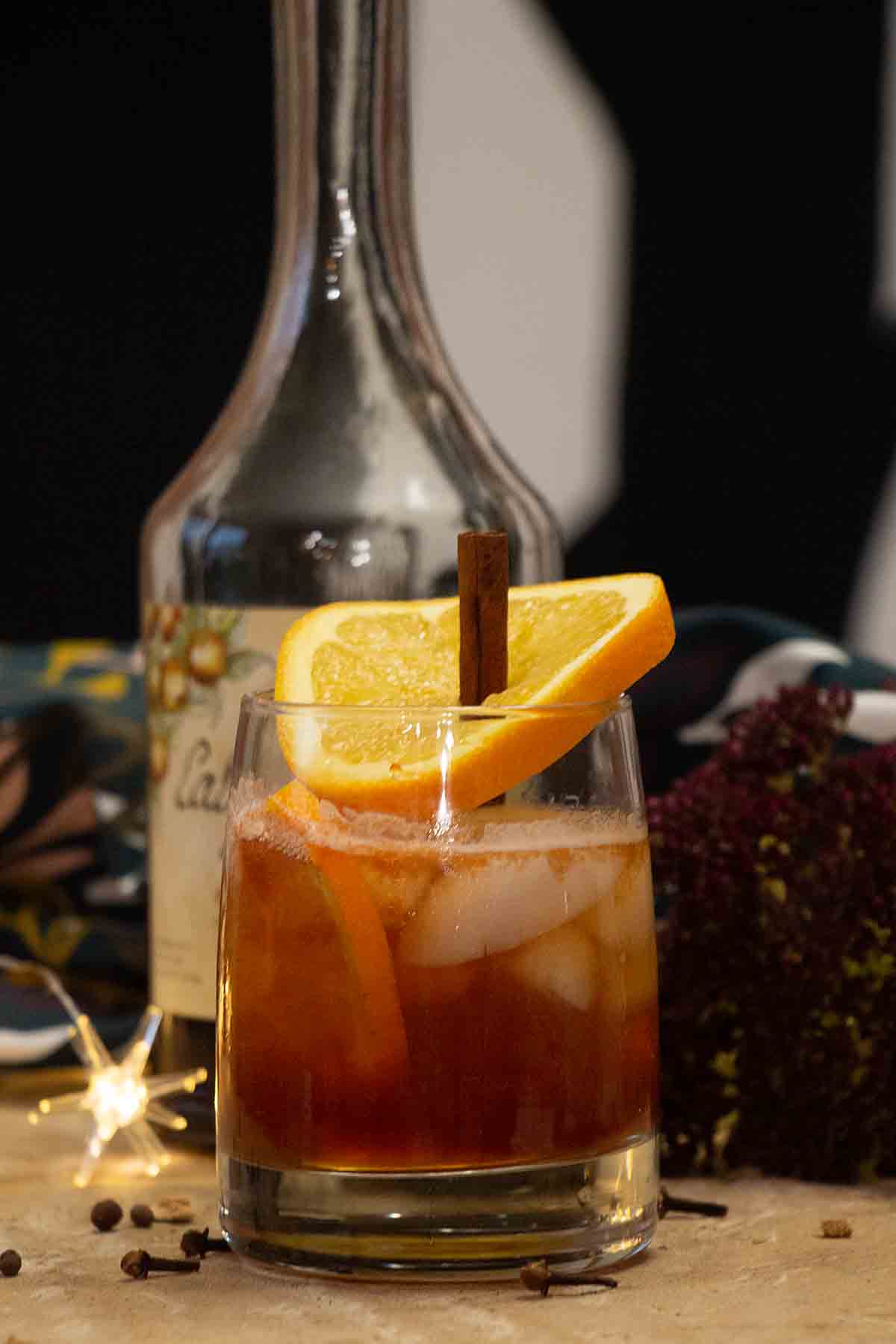 The Old Fashioned is a classic cocktail. And for me it’s always been perfect for fall. That’s when dinner moves from cookouts to gracious dining (remember Supper Clubs?) and earlier sunsets create prime time for cocktail hours.

Last weekend, after dining on brats and Brandy Old Fashioned Sweets at a New York City Packer bar, I was inspired. Could I take this over the top as a fall drink with apple cider?

It was a fun and delicious experiment, and the answer was a resounding “yes!” In fact I did it twice (in the same week, mind you) since I didn’t like my original photos. Life as a blogger can be tough sometimes 🙂 ! 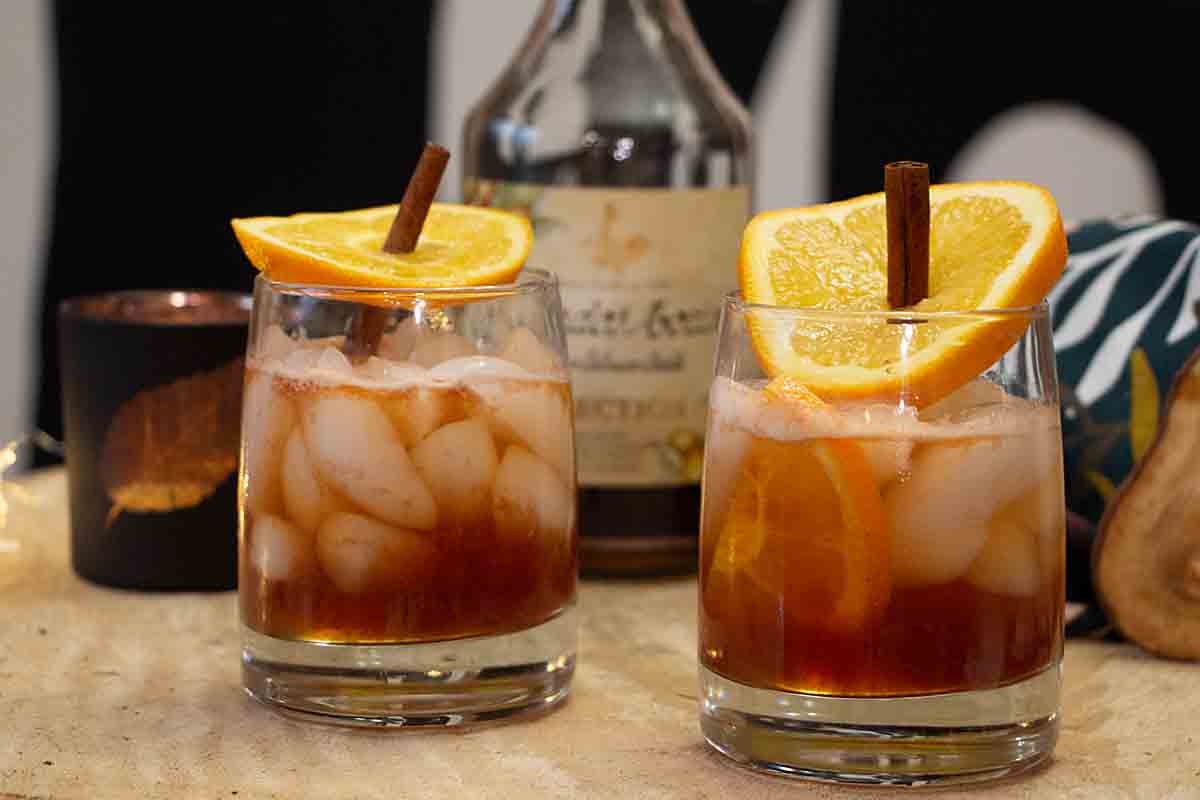 What is An Old Fashioned (and Why Are We Adding Apple Cider)?

If you live in Wisconsin, the Old Fashioned Cocktail is everywhere. There are many options to chose from like using whiskey or brandy, making it “sweet” or “sour”–and I won’t be going into these today. But the most common Wisconsin Old-Fashioned is an orange slice, cherry/cherry juice, sugar cube and bitters muddled (squished up together) then topped with ice, brandy and some type of soda.

Now per Thirsty Nest, the original old-fashioned was much simpler, consisting of whisky, sugar, bitters and a twist of orange peel. And some people still drink them this way.

But after Prohibition this started to change. Bartenders got creative—and the modern versions used ingredients like muddled orange and brandy. 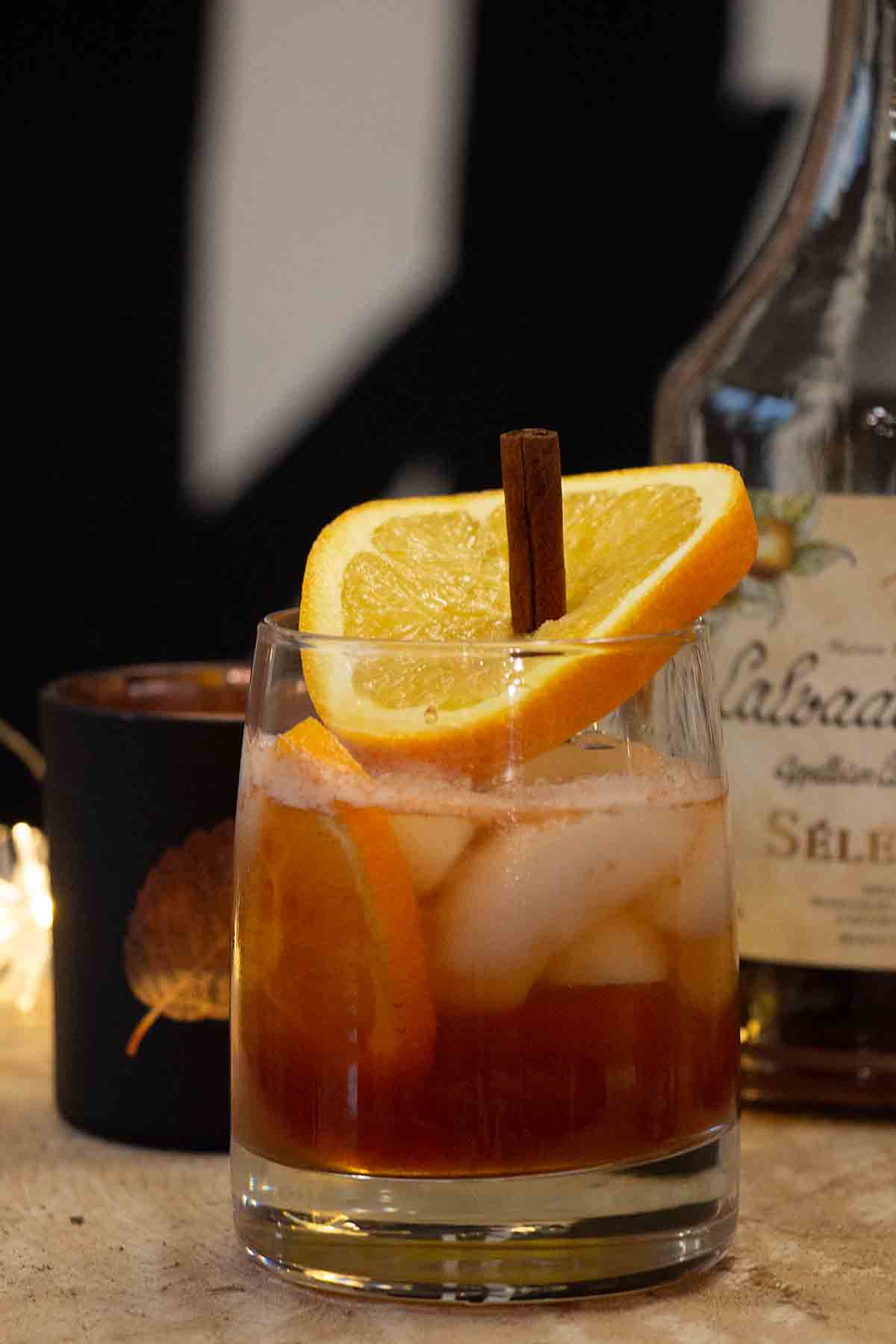 One thing that’s never changed is that it’s a stirred drink made right in the serving glass.  Does that give this the cherished “one dish recipe” status?

And Epicurious does note, “The best Old Fashioned recipe for you is the one you love.”

I think it’s always fun to go back to the classics! As I like to say, they’re classics for a reason.

The drink already feels perfect for cooler weather with its orange glow and warming brandy or whisky. And while the drink is good any time of the year, the fall twist from the apple cider is especially fun over the holidays.

And you can even “spook it up” a little and serve for Halloween! 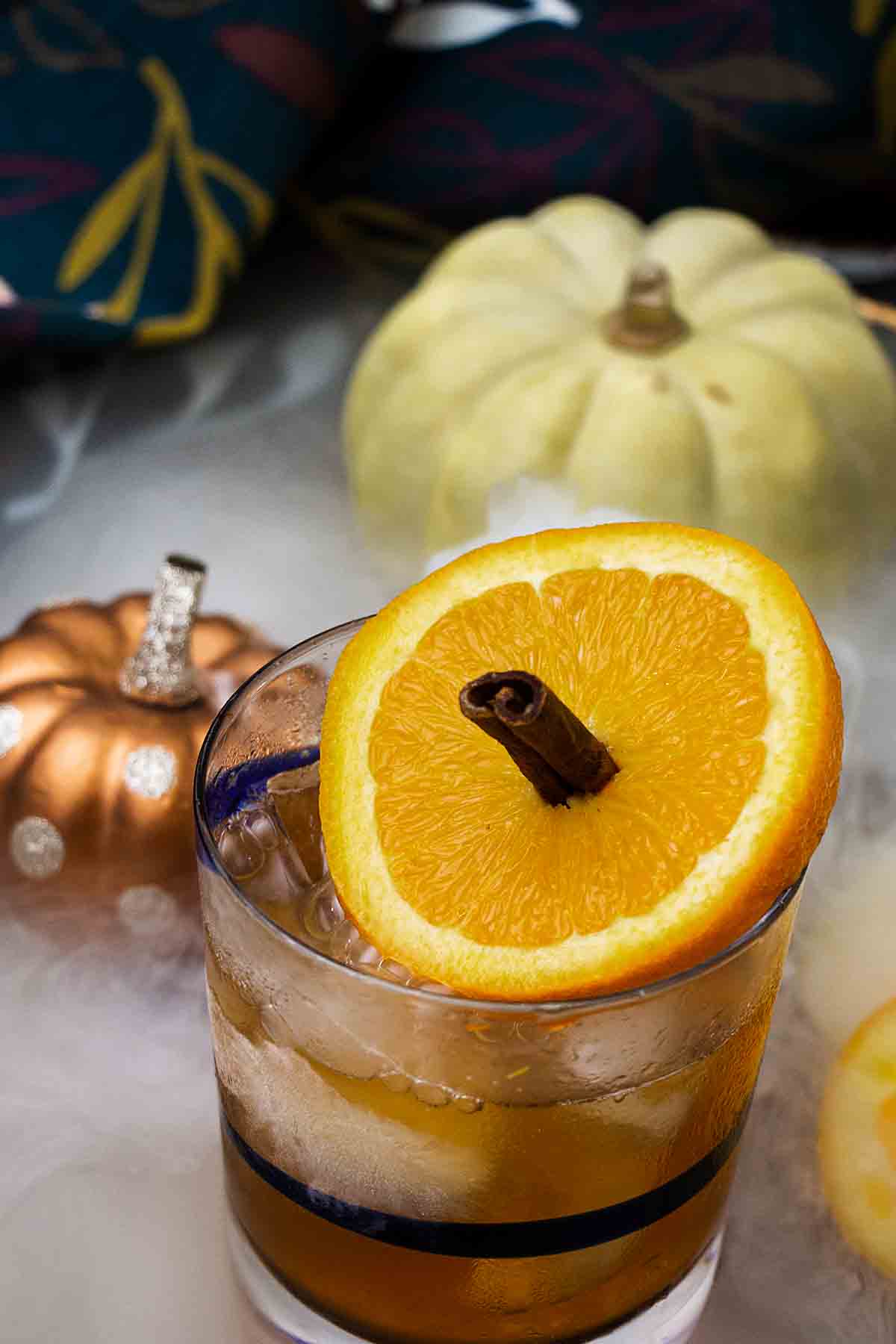 The drink comes together quickly, right in the glass you’ll drink it from!

Place the orange slice, maple syrup and bitters in the bottom of an old-fashioned glass. 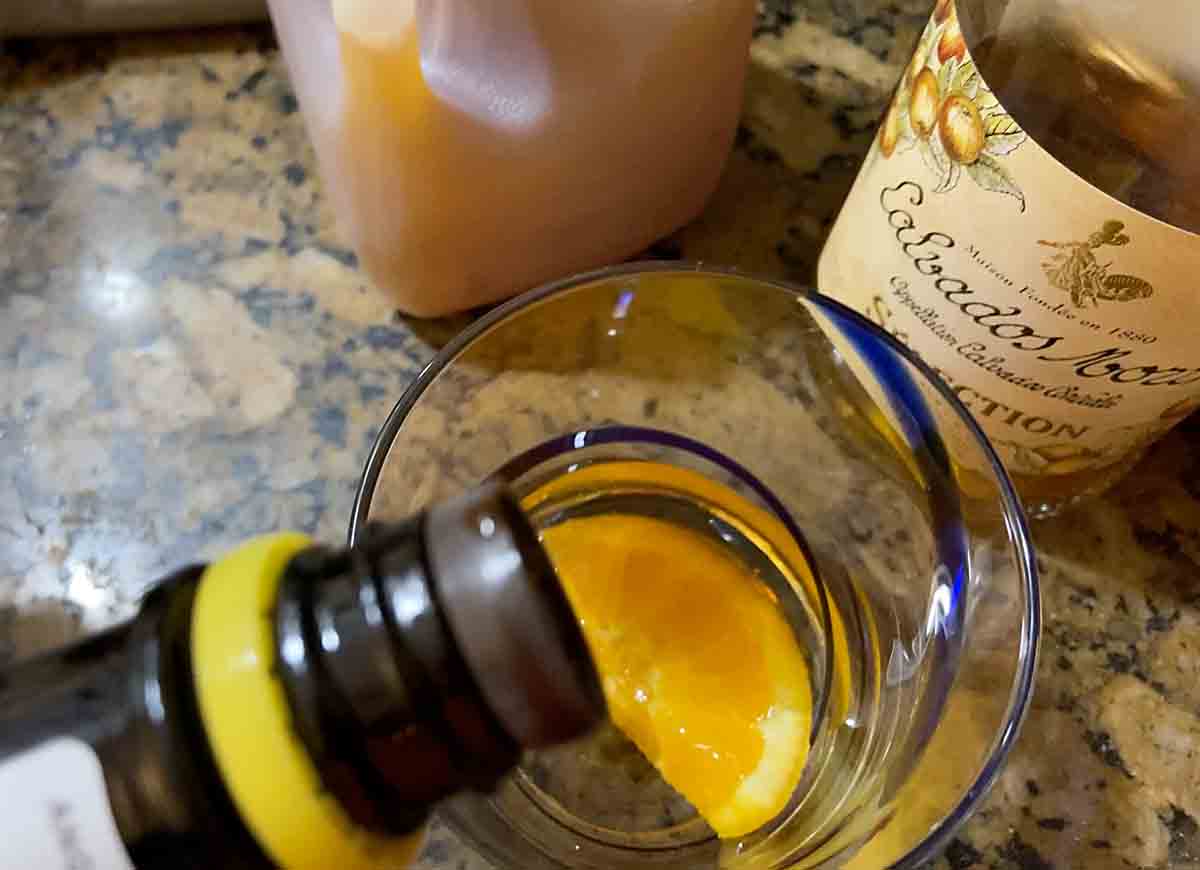 Muddle (crush and mix together) with a muddler, a spoon or I like the end of an ice cream scoop. 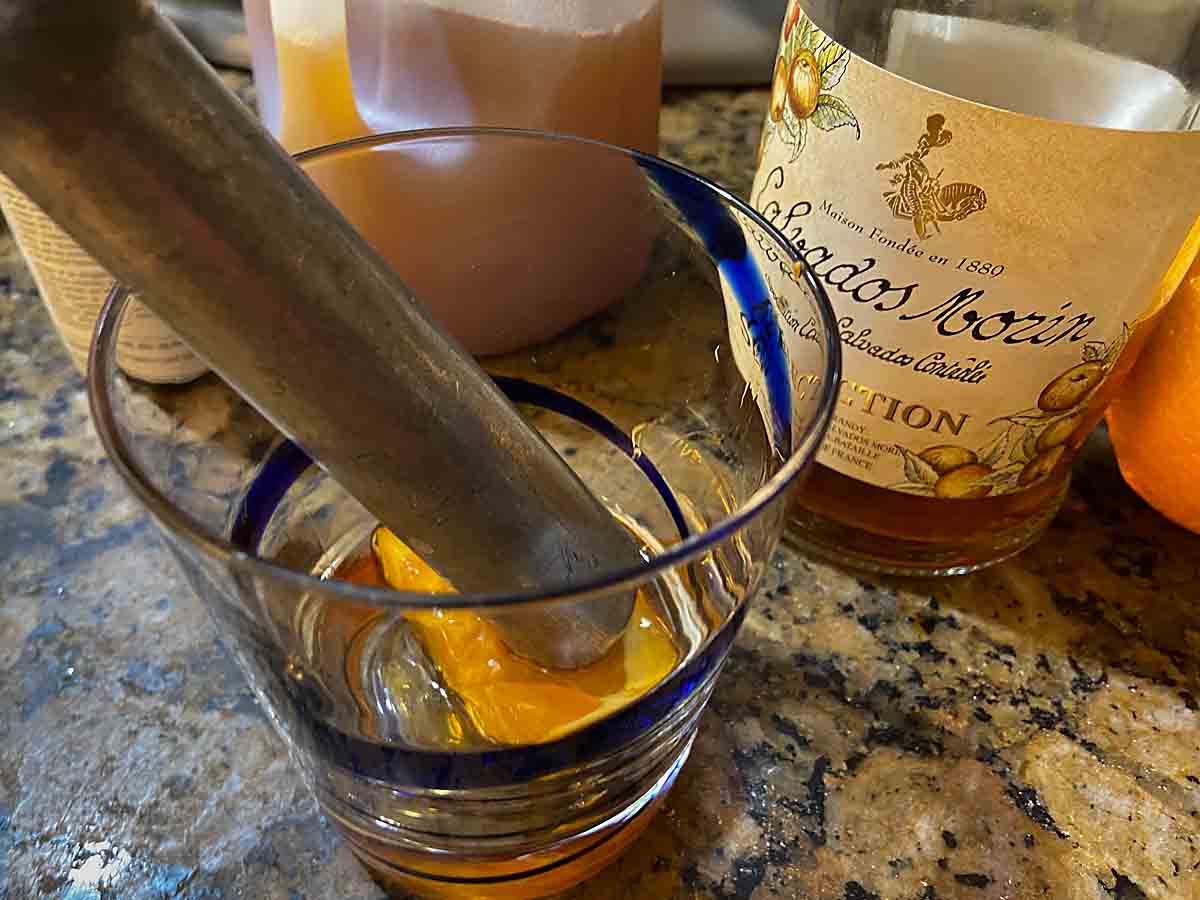 Add brandy (or your selected alcohol) and apple cider, then fill glass with ice. 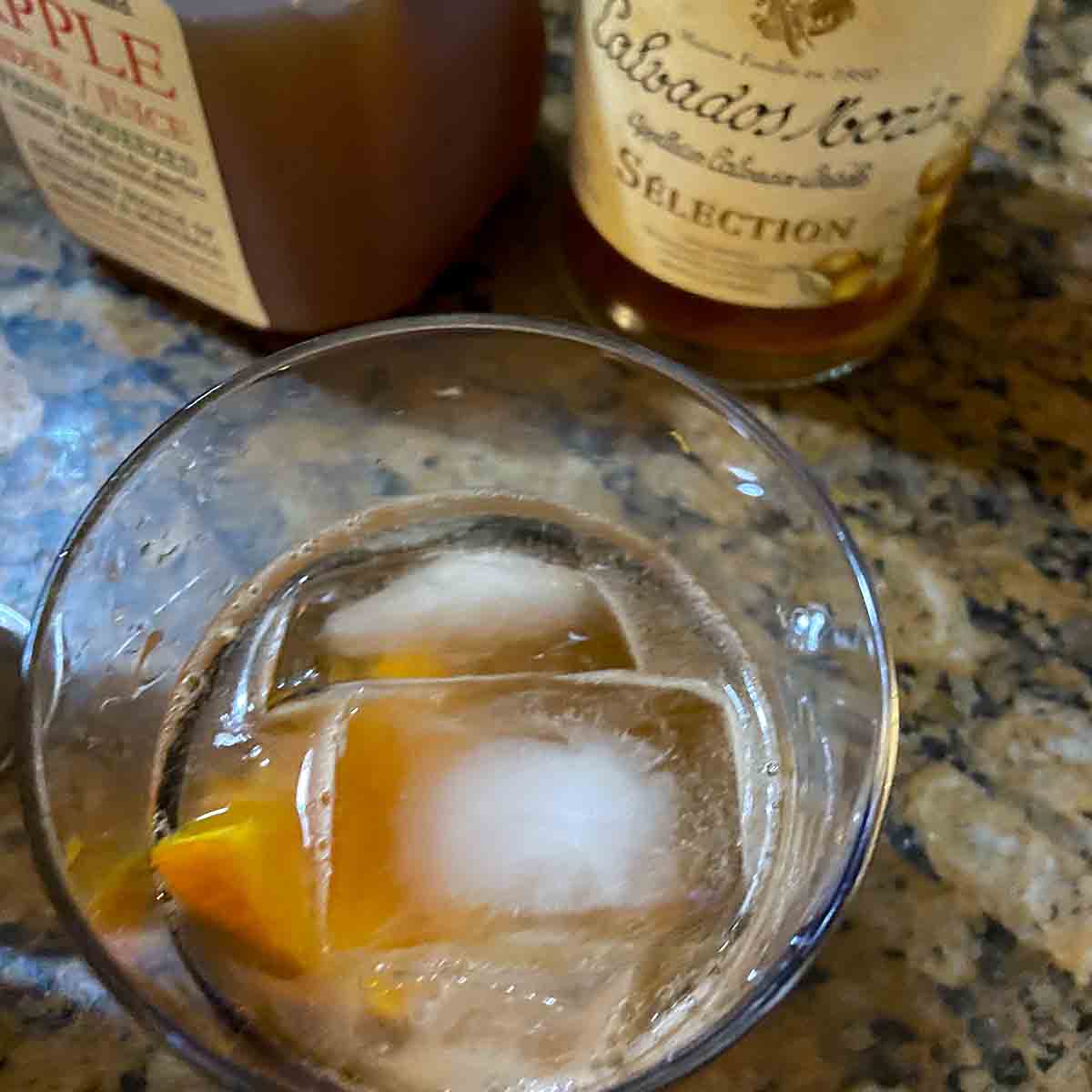 Top off with fizzy water (I like lemon flavored). 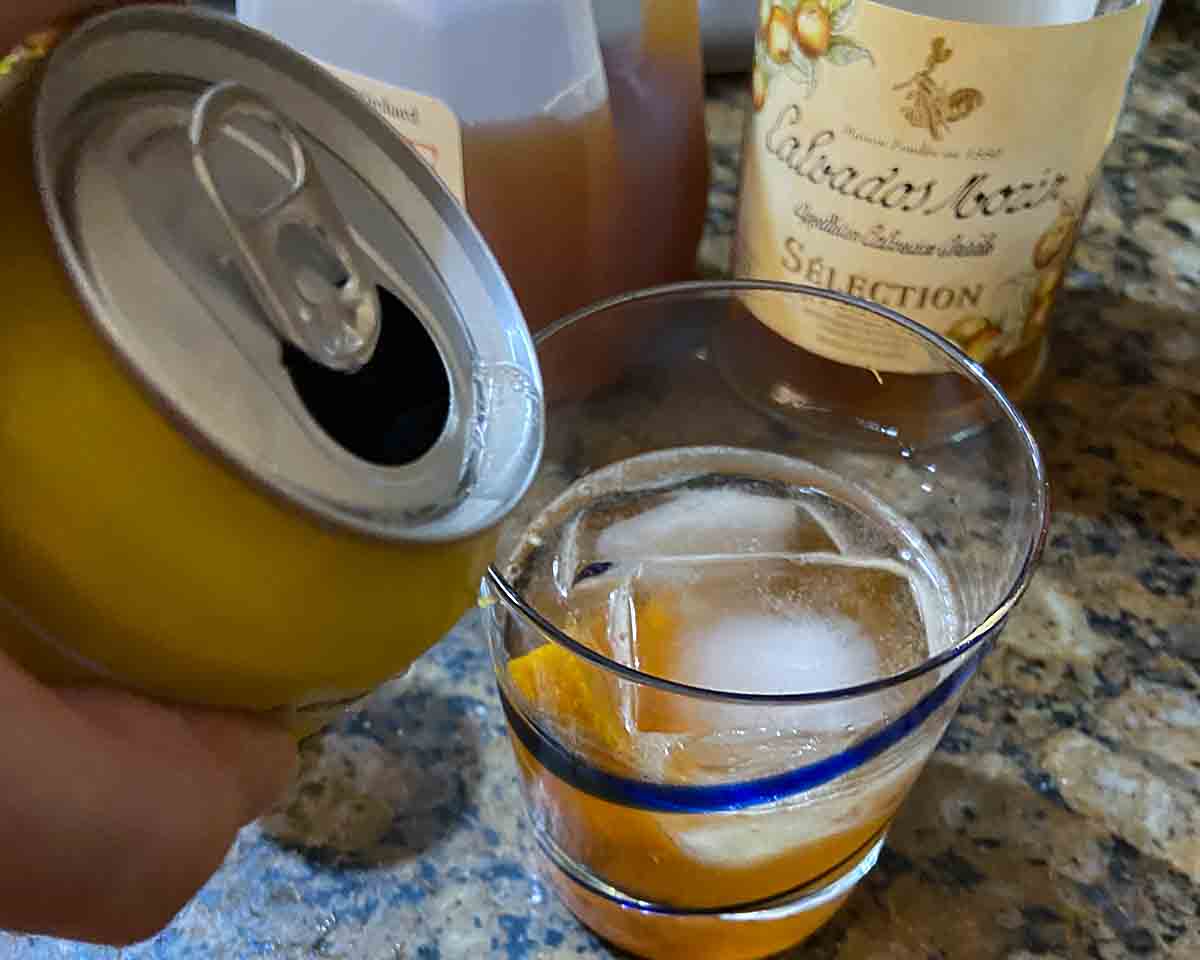 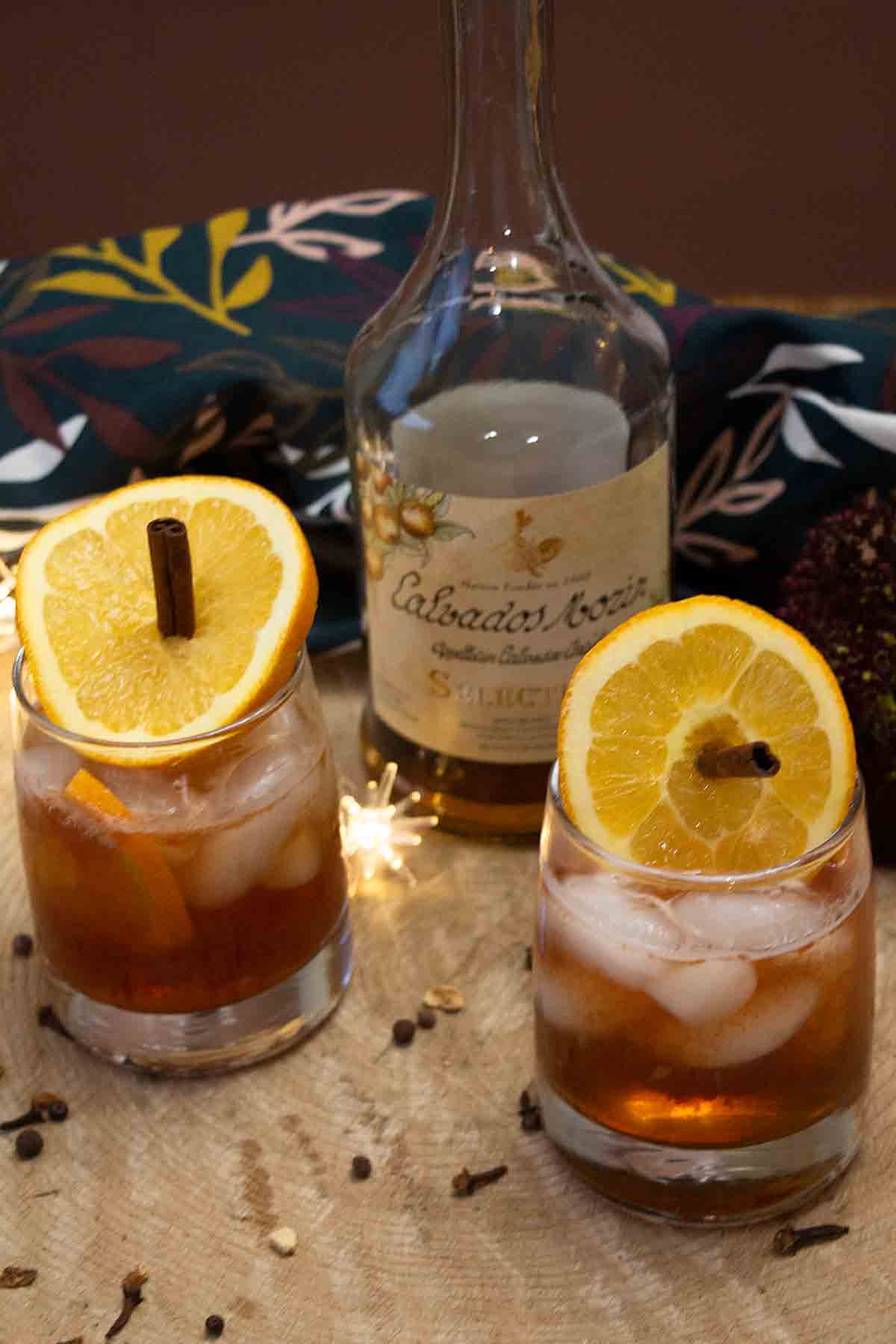 What Type of Alcohol Is in an Old Fashioned?

Some traditional choices for the alcohol in this Apple Cider Old Fashioned include:

I made a Calvados Old Fashioned, but would probably have used brandy or bourbon rather than make a special trip to the liquor store.

And in researching this, I learned that people will sometimes even use rum or tequila. Now that’s getting creative! 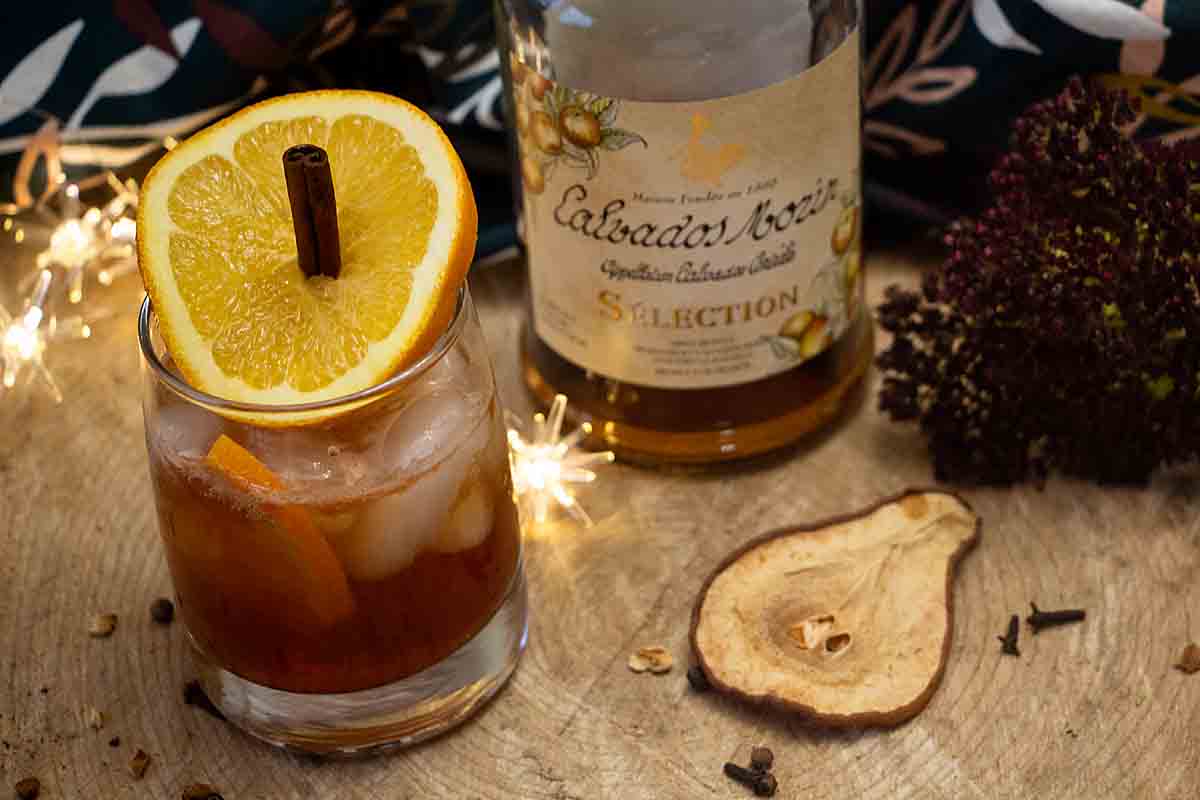 An important ingredient in this Apple Old Fashioned (or any old-fashioned) is bitters.

Per Wikipedia, “Bitters is traditionally an alcoholic preparation flavored with botanical matter so that the end result is characterized by a bitter, or bittersweet flavor. … Since cocktails often contain sour and sweet flavors, bitters are used to engage another primary taste and thereby balance out the drink and make it more complex, giving it a more complete flavor profile. “

In other words, bitters adds complexity to your drink!

Now I just used your basic Angostura Bitters which is a good all around bitters. But aficionados will keep more than one type around with varied and nuanced flavors. And while cocktail use predominates, bitters can be used in cooking as well (see Epicurious). 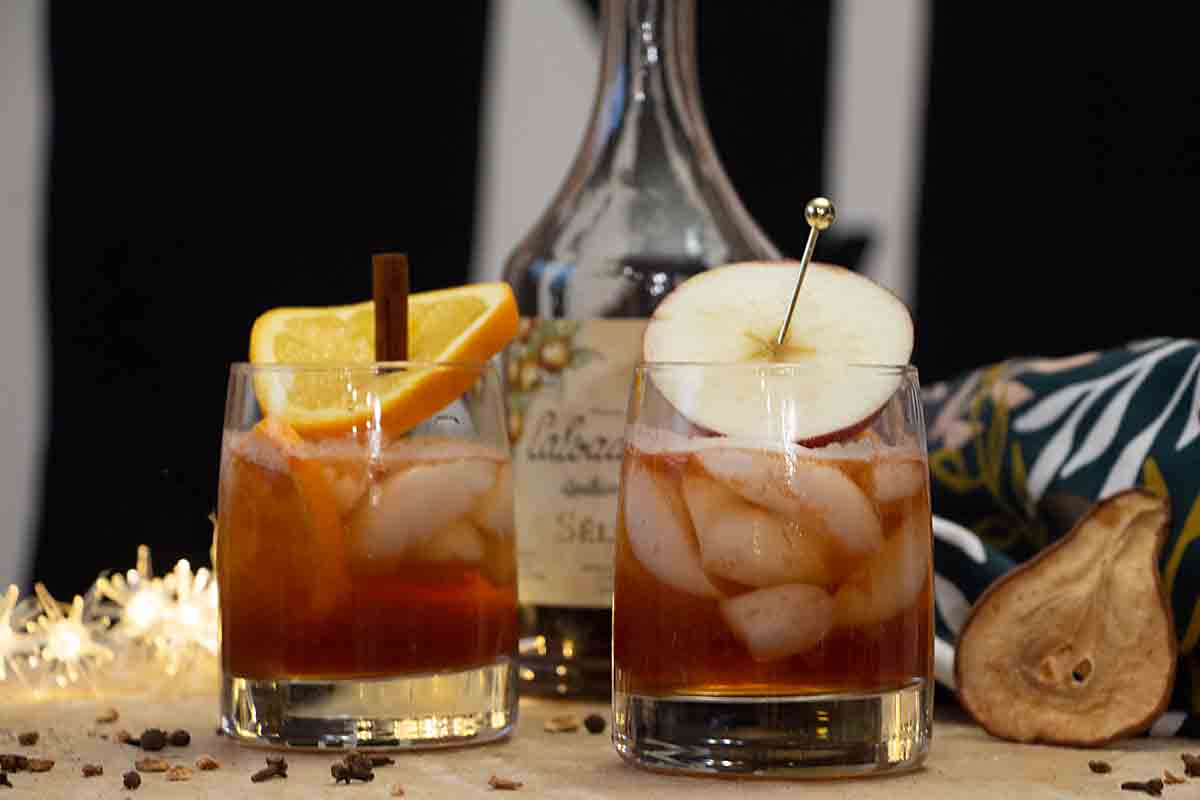 Part of the fun of a cocktail is a nice garnish!. Because I loved the color of the orange, I used a slice with a cinnamon stick as my main garnish.

But for an apple cocktail garnish, of course, apples are a logical choice. Just remember that they are more brittle than oranges and will work best on a pick. (Ask me how many apple slices I broke before realizing this.). For a twist on this, a slice of dried apple would be lovely and also more pliable!

And given the season, cranberries (sugared or not) or cherries would also be a nice garnish

Place the orange slice, maple syrup and bitters in the bottom of an old-fashioned glass. Muddle (crush and mix together) with a muddler, a spoon or I like the end of an ice cream scoop.

Add brandy (or your selected alcohol) and apple cider, then fill glass with ice.

Top off with fizzy water (lemon is nice).