Homemade Egg Noodles in Chicken Broth are a rich and flavorful holiday side or special treat any time. 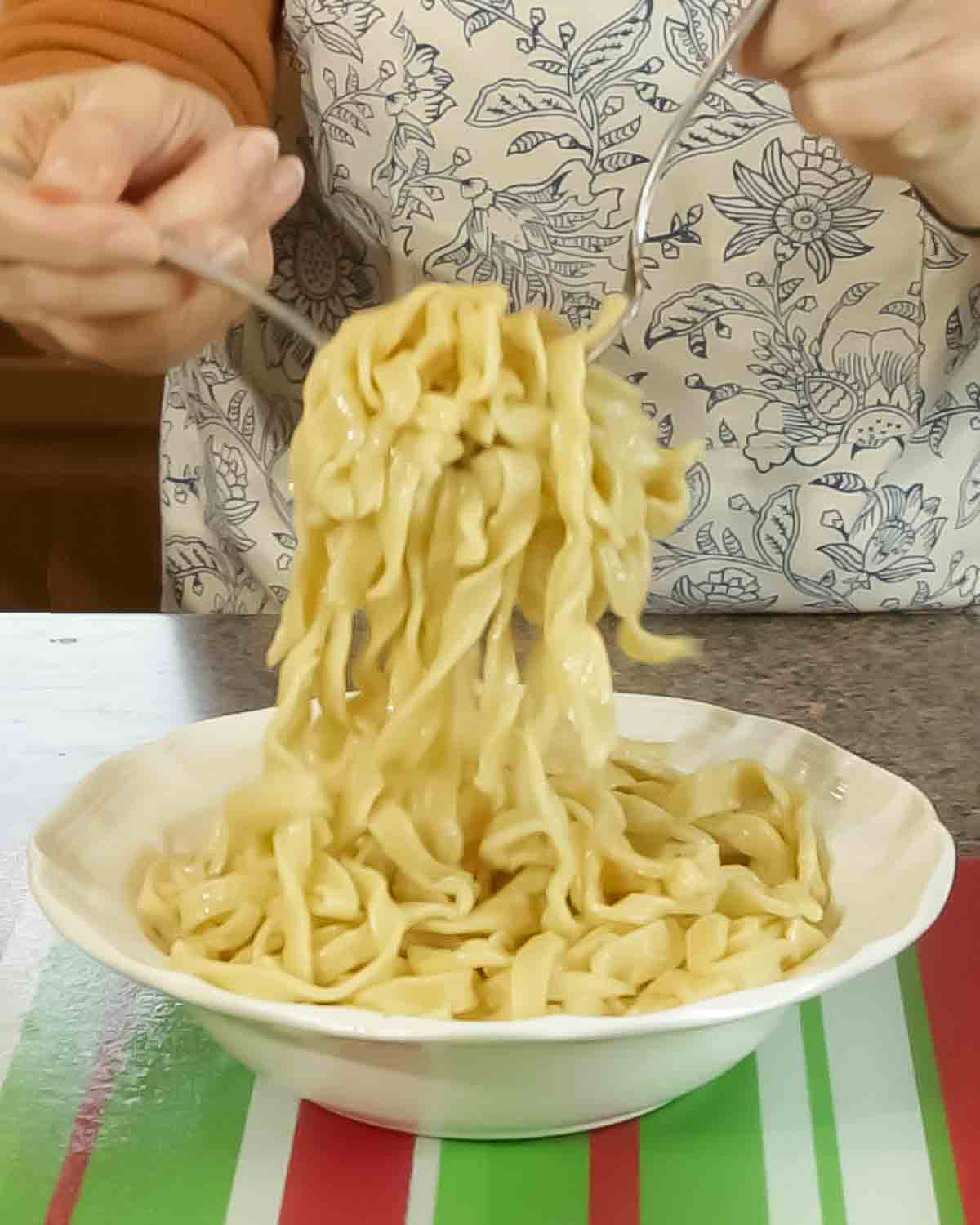 The holidays are coming.  And they’re a special time for remembering, then making more memories.

So is there a better time for nostalgic recipes?

Of course there are always a lot of contenders for space on the table.  Besides the ubiquitous turkey and mashed potatoes, you might consider Sweet potato pie, Christmas Drinking Custard and today’s Homemade Egg Noodles in Chicken Broth.

Egg noodles in Chicken Broth is rich enough for a special treat but has a homespun goodness that is perfect for the holidays.  And this classic recipe came right from my grandmother! 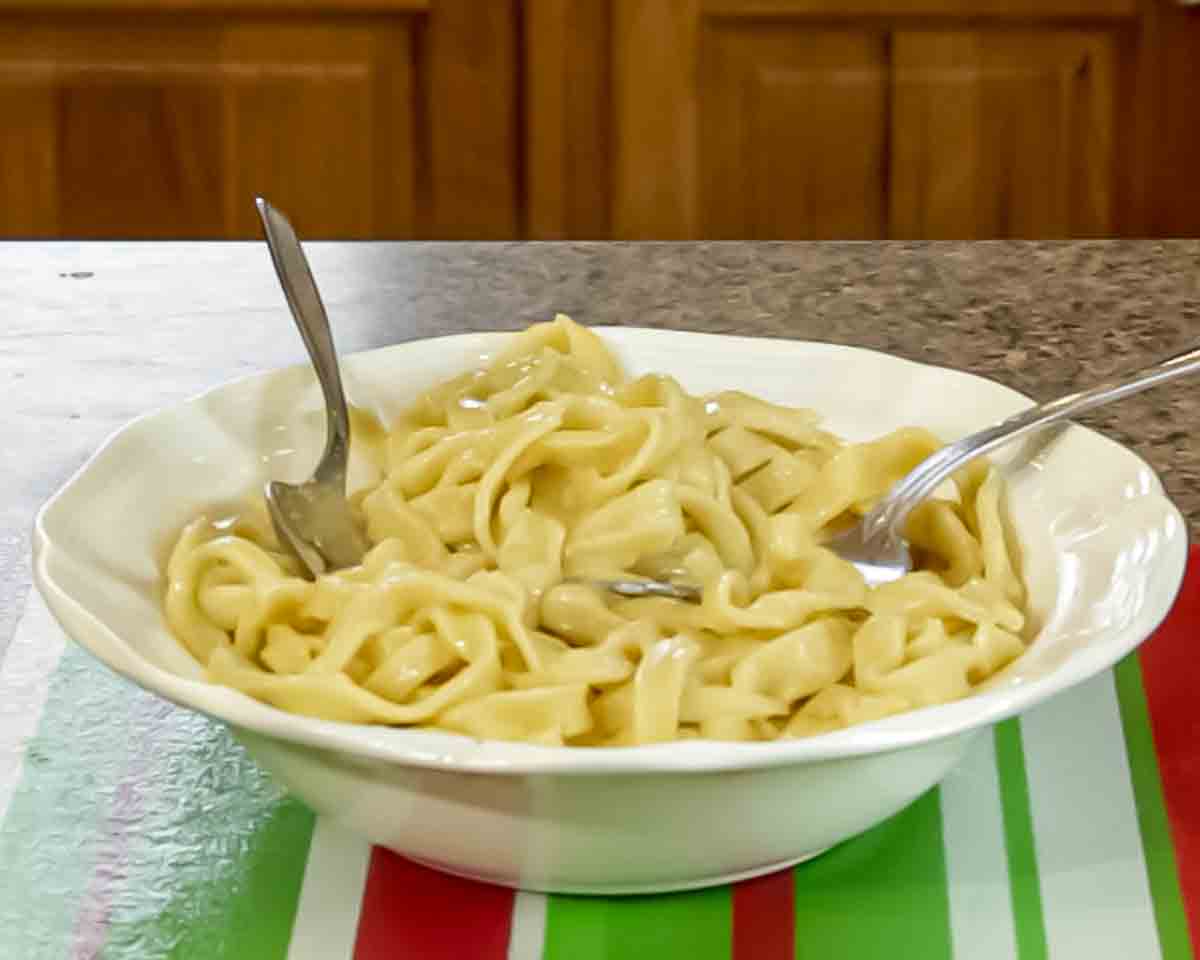 Tasty.  The noodles are rich, eggy and flavorful, infused with a tasty superfatted broth.  This creates an amazingly rich side dish.  You weren’t going to get your cholesterol checked after the holidays anyway, were you?

Nostalgic.  This is a true classic, right from the files of my grandmother.

Family Friendly.  This is a great recipe to get your kids involved in cooking and holiday prep.  My grandmother used to save the “pinwheels” for her grandkids to unroll before every Thanksgiving meal and we were so proud to help! 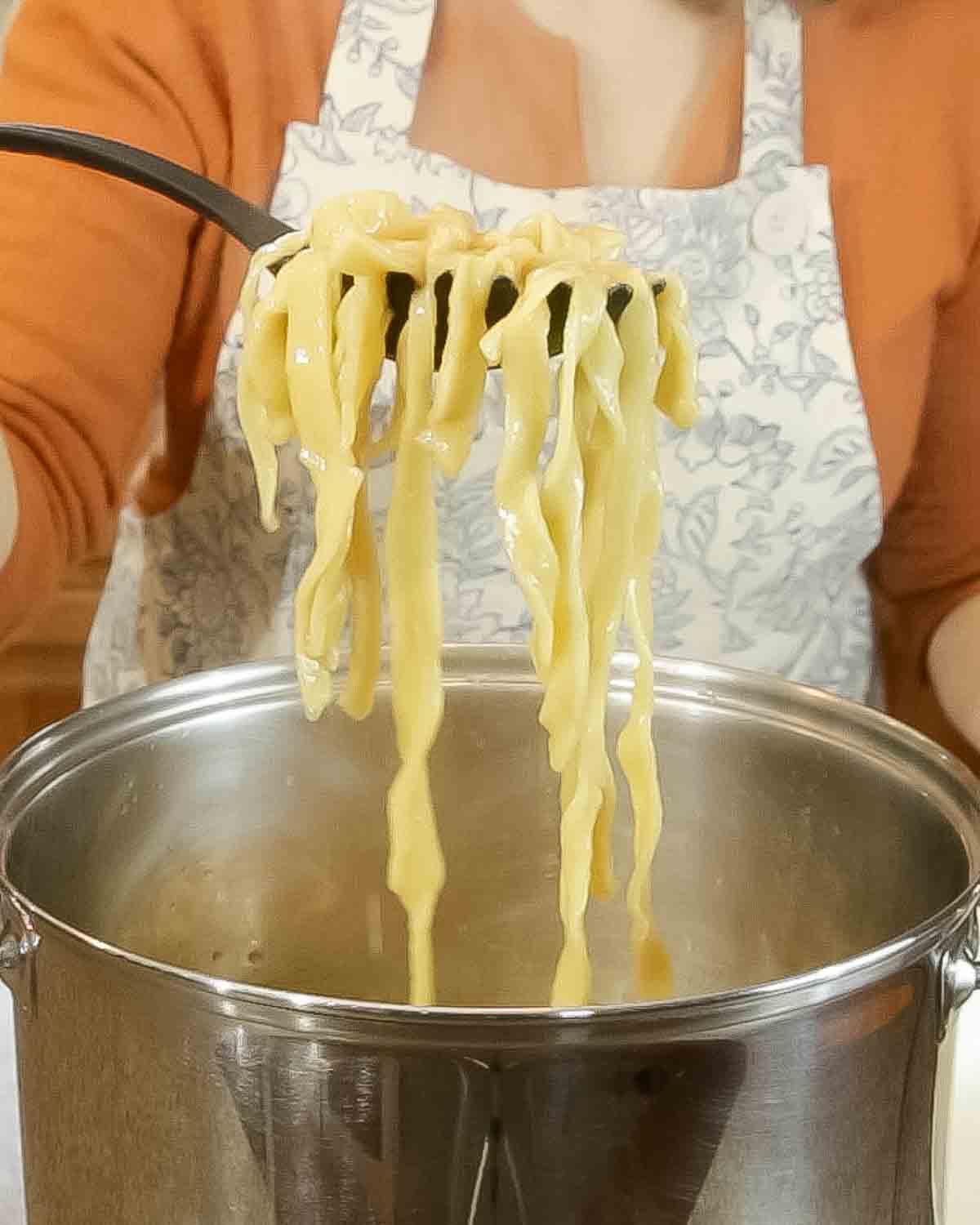 In a large bowl, stir together the flour and pinch of salt. Add the beaten egg, milk, and butter. Mix until mostly blended, then drop mixture onto floured surface. 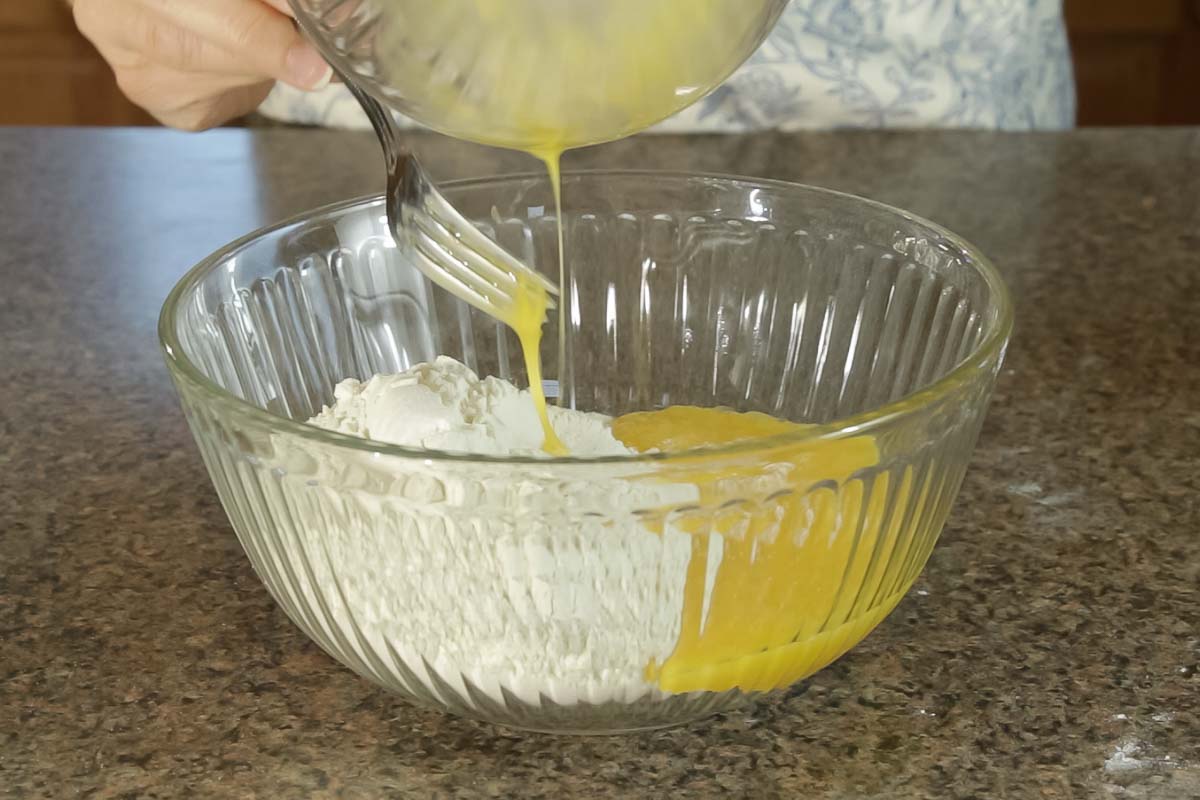 Finish blending by hand, then knead until smooth, about 5 minutes. 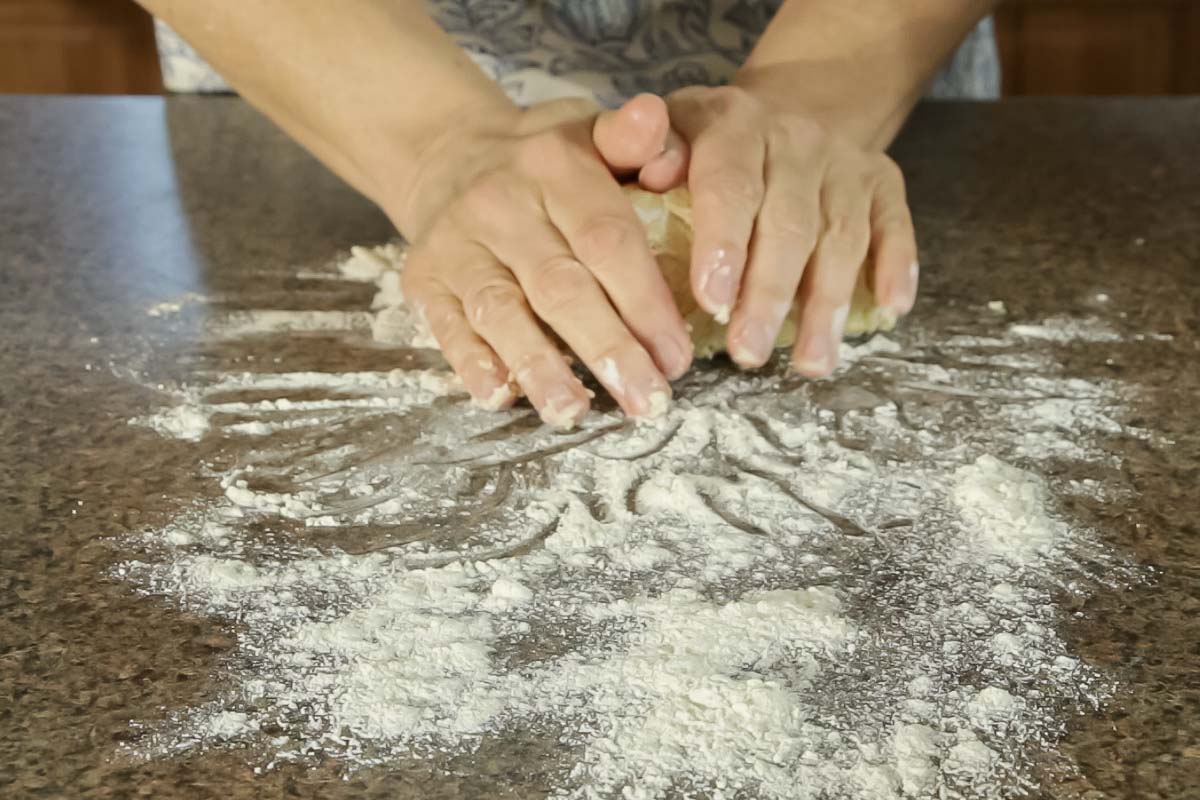 On a floured surface, roll out to 1/8 or 1/4 inch thickness. When done, flour both sides of the dough lightly so it isn’t sticky. 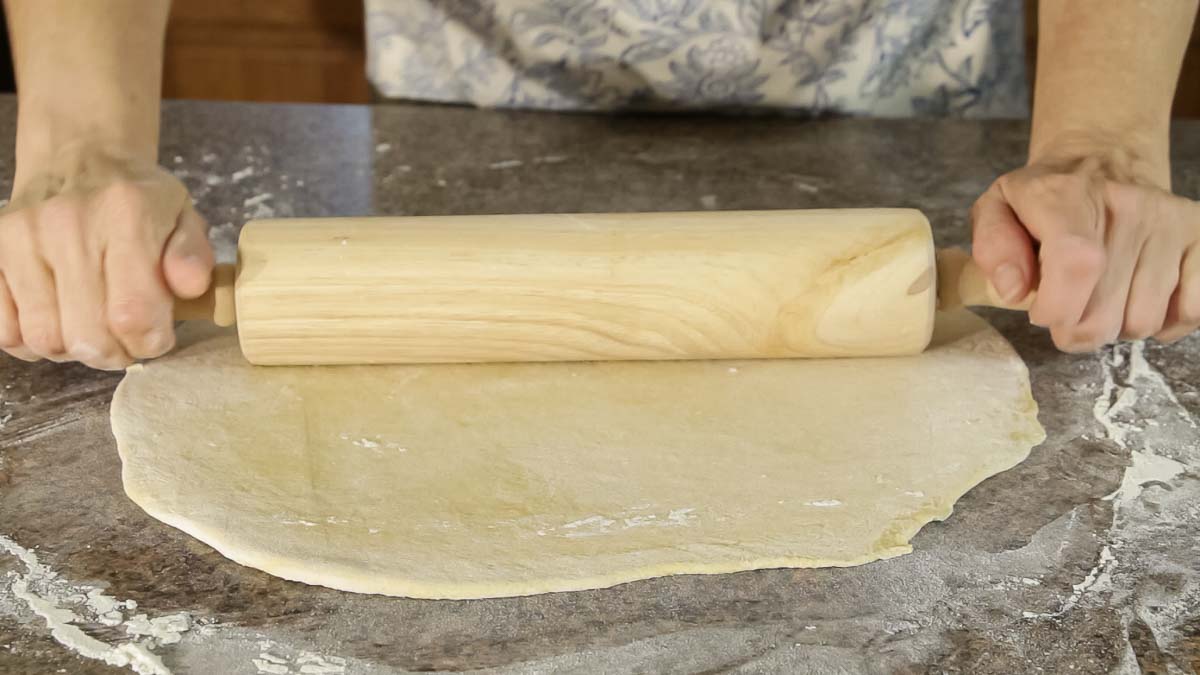 Starting on one end, roll up the dough into a long cylinder. 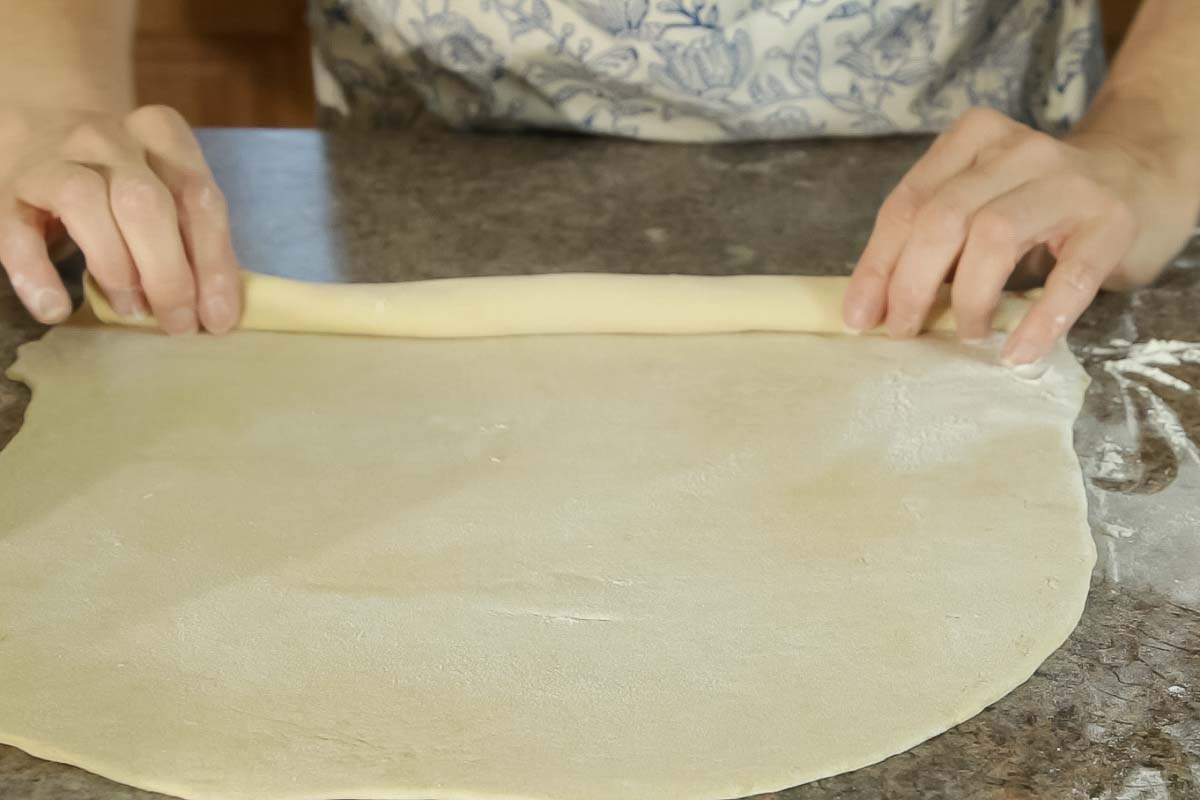 Cut “wheels” all the way down the length of the cylinder. 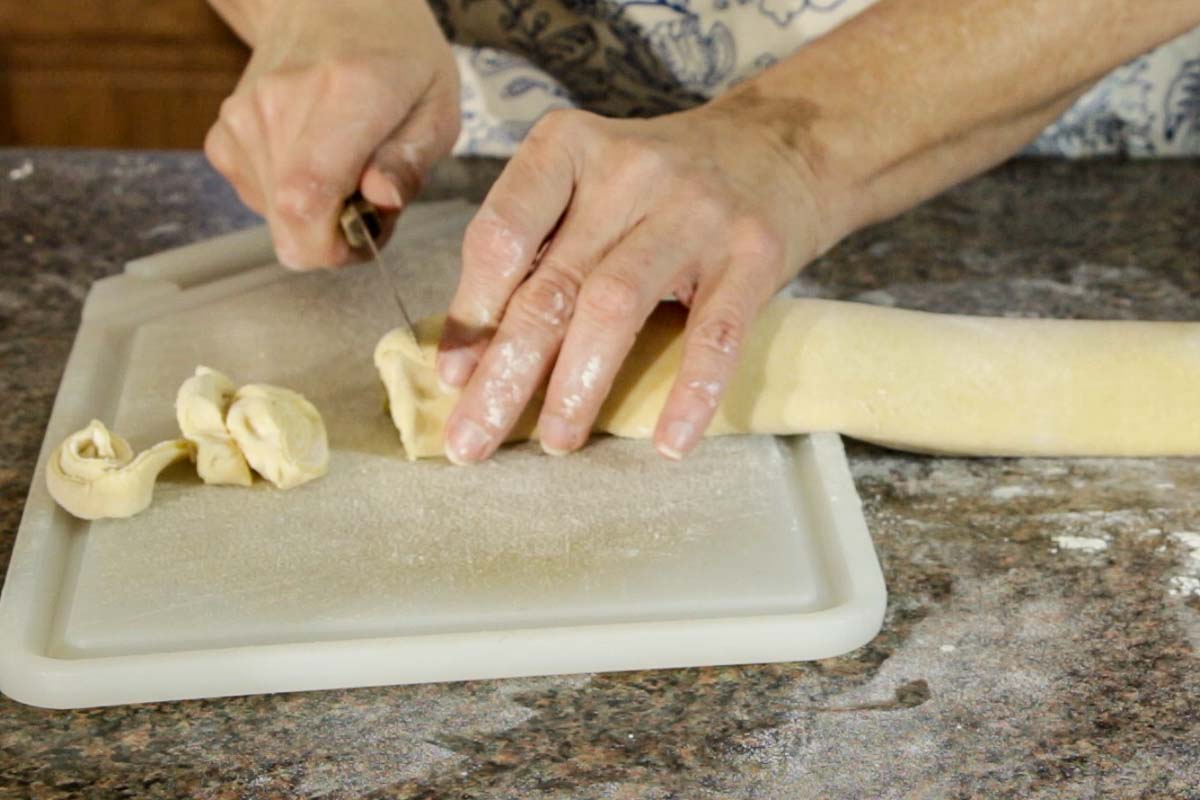 Unroll the “wheels” and allow noodles to air dry before cooking (at least 15 minutes). 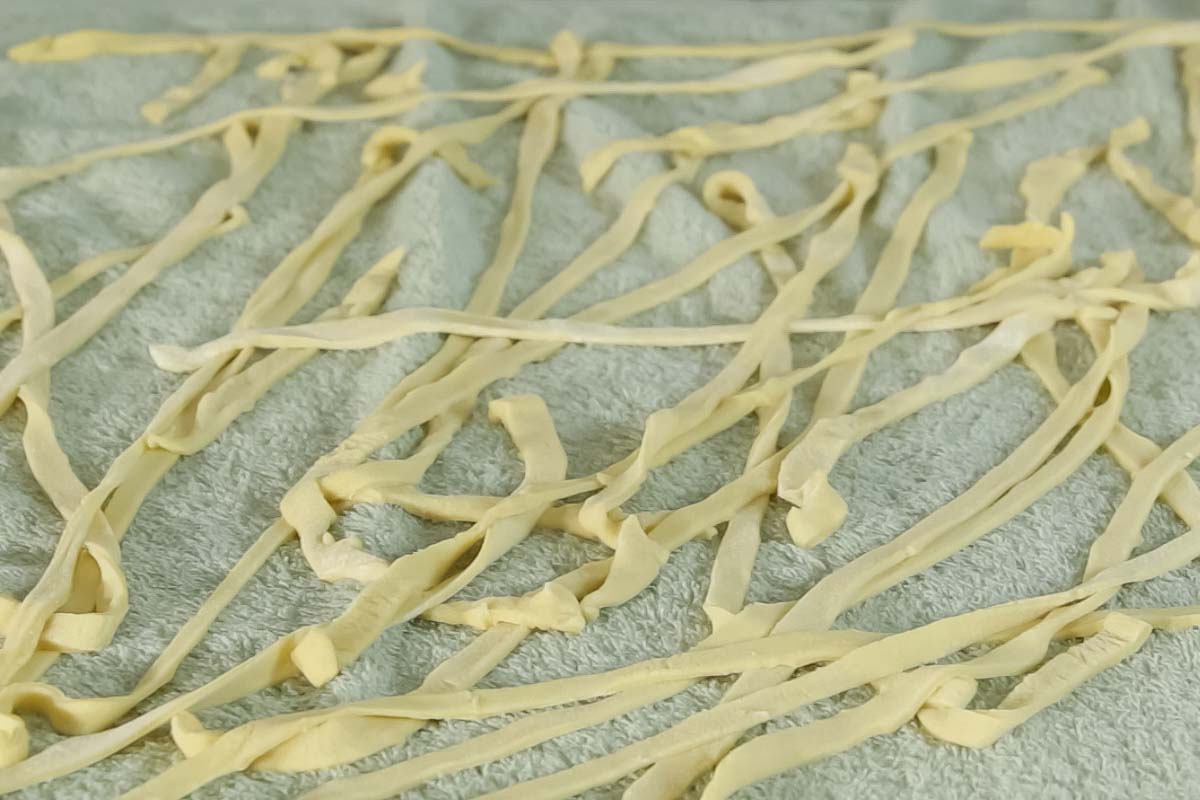 Heat broth, salt and chicken fat in a large pot and add noodles when boiling.  Cook until done, approximately 5 minutes. 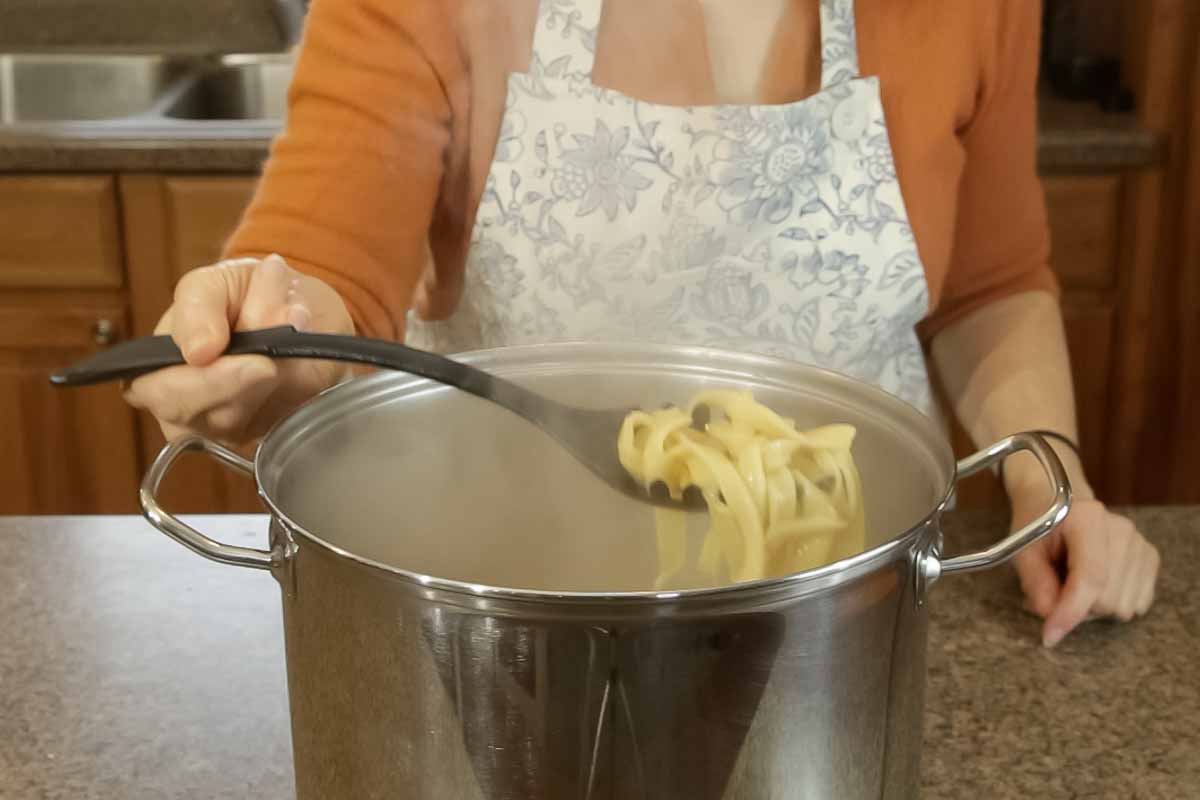 And just in case you want to see the process in video format, here’s a quick demo!

How to Create the Richest Chicken Broth

The first time I made egg noodles in chicken broth, I was seriously disappointed.  Especially since I had boiled a whole chicken to create a homemade stock just like my grandmother did.  My mother commented that I’d used an ordinary supermarket chicken and should try a stewing hen.

For my next attempt, I ordered a stewing chicken from the butcher and it made a much better broth.  But the real answer came when I found kosher chicken fat at the grocery store and added it to a free range farm chicken.  That broth was amazing! 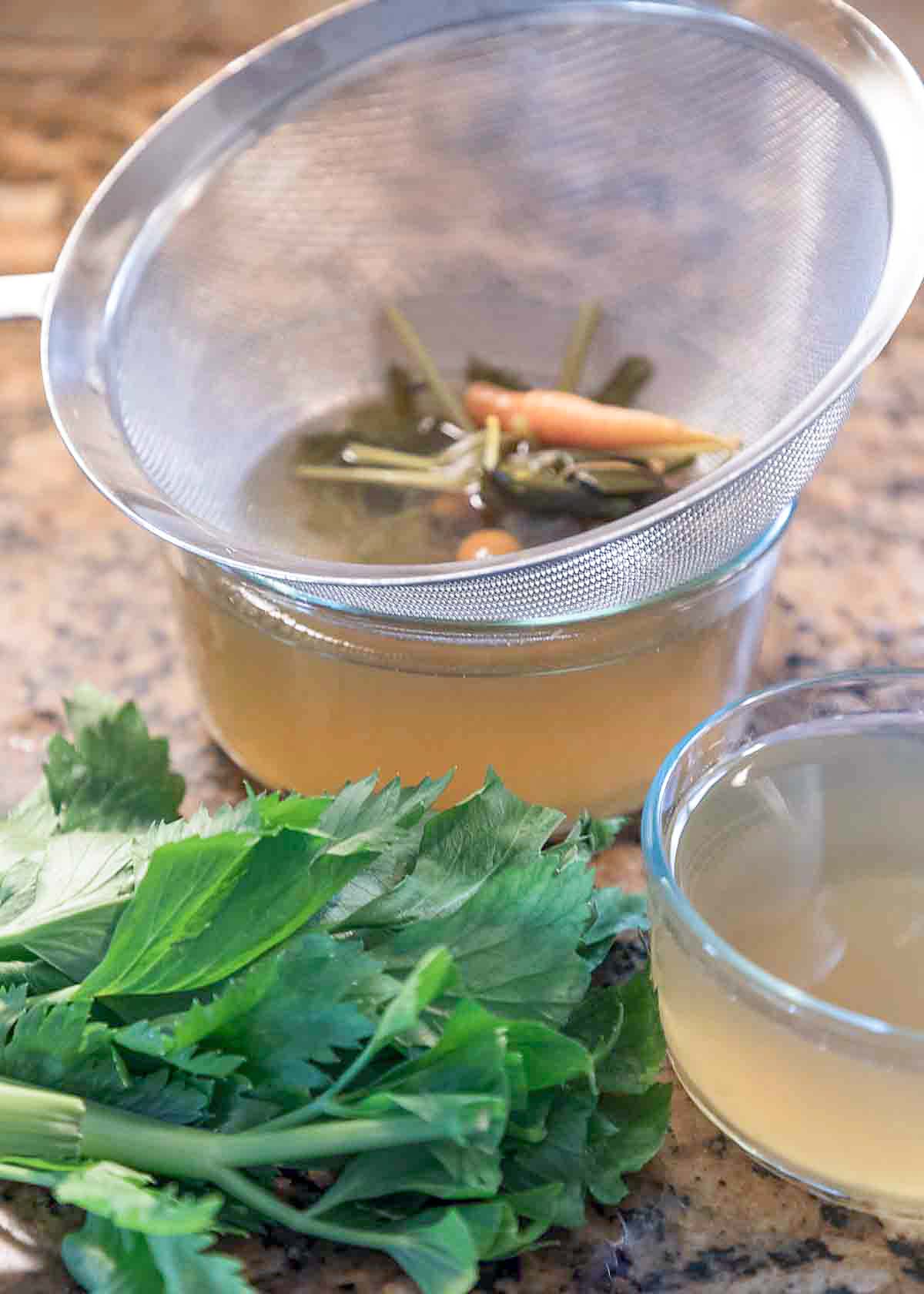 But I’ve never been that fond of boiled chicken meat so I ended up changing my approach.

Now I start with good broth that I create separately, using my Chicken Bone Broth recipe. (Be sure to use your Thanksgiving turkey carcass for broth!)  And truthfully, in a pinch I’ll use a good commercial chicken broth.

The second component is the chicken fat that is created whenever I make my bone broth.  The fat collects on top of the broth as it cools and I scrape it off to freeze it separately.  I keep a jar (or more) of chicken fat in the freezer and add to it when I have more.

And together, this has the great flavor as my grandmother’s!

Plus whenever the time comes to make noodles, I have what I need! 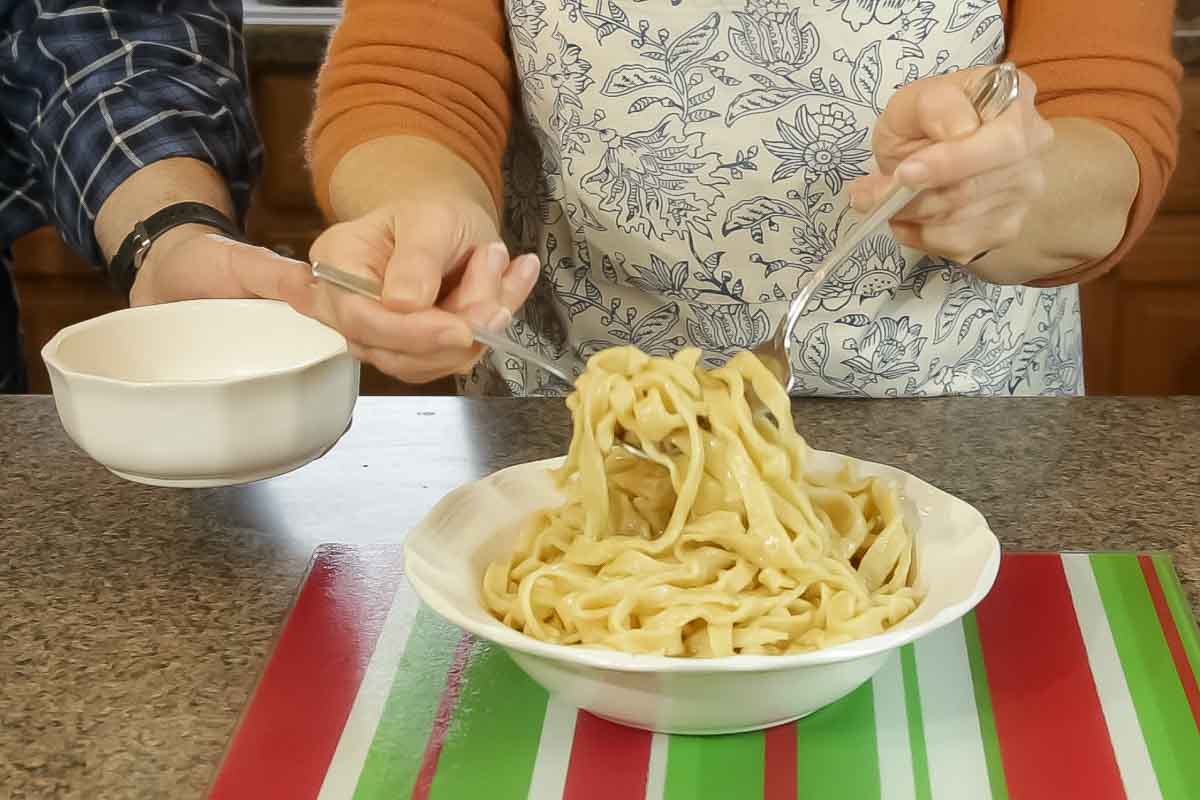 I serve this as a side. It’s especially nice with a roast chicken or turkey.  But it would be great alongside other “old world” entrees like a baked ham or pork roast.

I usually serve the noodles very simply, scooping them from the pot with a very small amount of broth.  Since so much of the richness has been absorbed as they cook, you don’t need anything else to make them delicious.

But my grandmother used to boil a chicken (or perhaps more than one) and chicken meat floated in the broth with the noodles.  And she included the chicken gizzards and hearts, which we all considered a delicacy.  Feel free to go that route if you’d like.  Though I do think my kids might faint if they saw a chicken heart in their noodle bowl.

You can also make the egg noodles and cook them in water for a basic pasta. 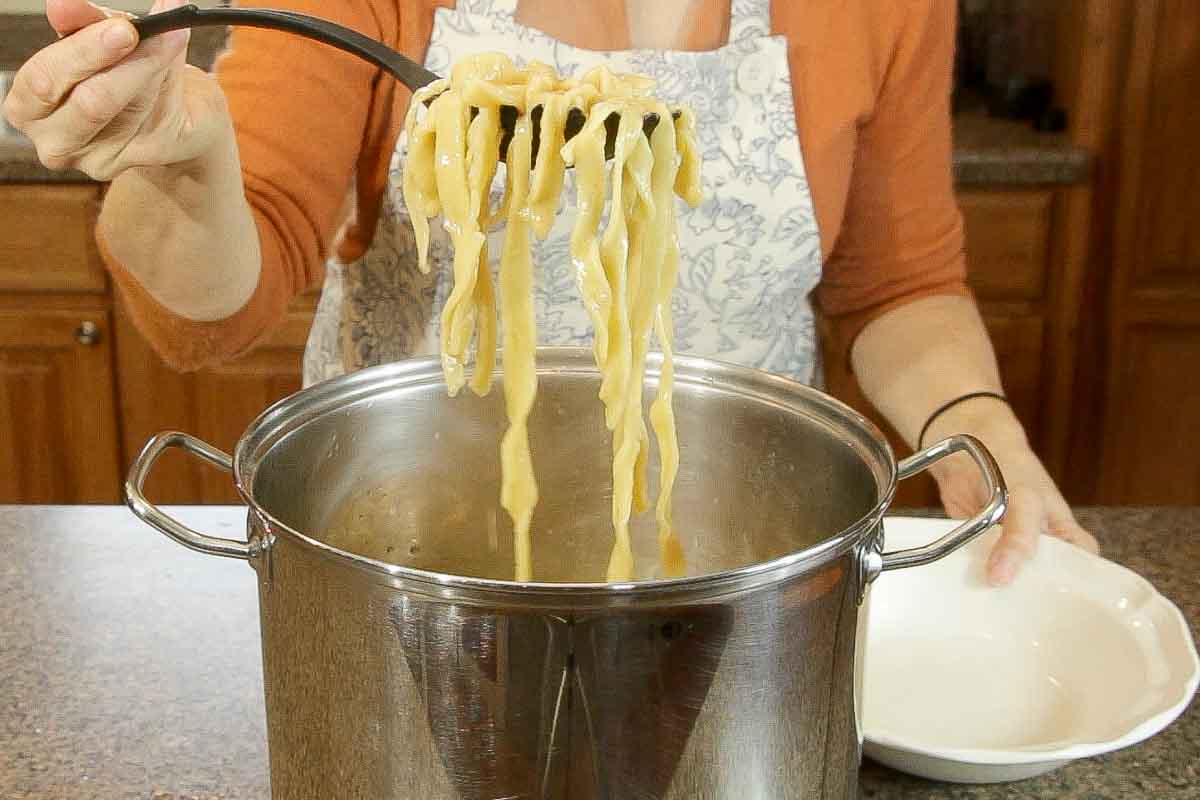 You can make these ahead of time and let them sit in the broth refrigerated.  The noodles will soak up additional broth and be even more tender and flavorful.

Try to use any leftovers within a few days.  I’m pretty sure this won’t be hard!

The salt is important for the flavor, so if it tastes flat, be sure to adjust.

The recipe is small so it can be made even if you aren’t hosting a party.  Consider doubling (or tripling) it for a larger group.

Welcome to Holiday Side Dish Week 2022 hosted by Heather from Hezzi-D’s Books and Cooks. This year we have over 45 side dishes to help you plan your holiday meals. 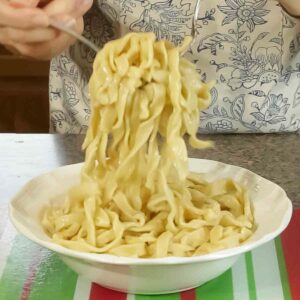 Homemade Egg Noodles in Chicken Broth are a rich andflavorful holiday side or special treat any time.
5 from 1 vote
Print