Every Foodie should do it at least once.  Enter the culinary competition at their State Fair that is. 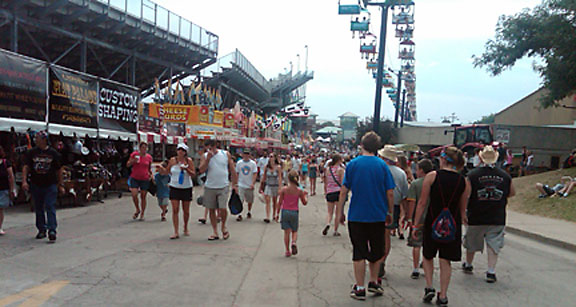 I’ll admit I had a number of misgivings.  First my style of cooking isn’t consistent with traditional standards–I use whole grains, decrease fat, and I don’t usually peel my fruit (quicker, healthier, less waste).  This means my breads are less lofty, my muffins a bit drier and my pies a little chewier.  Never mind that I haven’t had a cold in 4 years (guess I’d better knock wood after writing that).

But I happened to have a week that wasn’t crazy-over-packed, wedged in between my daughter’s out of state college orientation and the American Cheese Society Conference, and there were a couple days of competition then.  So off I went. 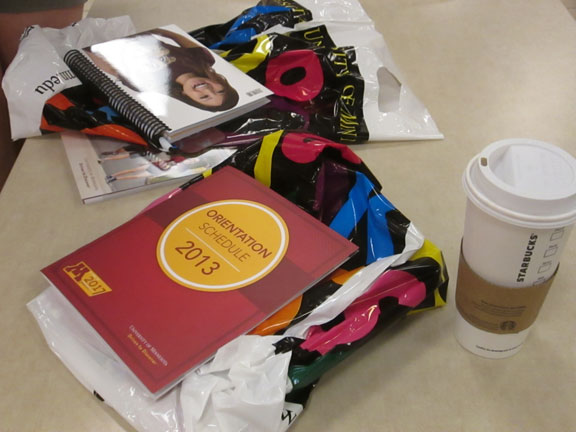 The pre-work was easy–just complete the entry form on the internet, and of course test & tweak some recipes (though if I’d gotten this idea earlier, I could have spent a lot more time on recipe development).  I also needed to scout out disposable serving plates because my tart for day 2 needed something bigger than standard paper plates.  Luckily the local party supply store was loaded with disposable serving items (aluminum warming trays & lids, large plastic serving dishes and more) and had a “tart plate” that was perfect.  A great discovery in case I ever throw a really big party too!

Wednesday morning marked day 1 of the culinary competition.   I got up early and started baking promptly at 6:30 AM, beginning with my honey whole wheat bread–rising time would clearly be critical path.  I followed this with lemon lavender shortbread and chocolate chip zucchini muffins and by 9:30 was ready and loaded into the car for the half hour trip.  I used really large cookie tins to transport my entries, plate and all, which had a second advantage of letting me keep the lids off to cool on the drive, and put them back on to carry.

When I got to the door of the competition building, a group was out front giving parking instructions.  “Park your car in front, put on the hazards and run in and leave your food on the staging tables.  Then move your car to the gravel lot and come back to register.”

I did as requested and was soon back at the registration table.  “I don’t know anything,” I confessed, “I’ve never done this before.” and they smiled and handed me a ribbon for first time participants.  I liked this already!

They gave me a number and pointed to a waiting area.  Here I got into conversation with a few other women which helped the time pass and before I knew it my number was up.  I brought up my food and printed recipes to a friendly young man who assembled everything and sent the entries off to a holding area.  I left at about 10:45 to go home for lunch and a shower before coming back for the judging. 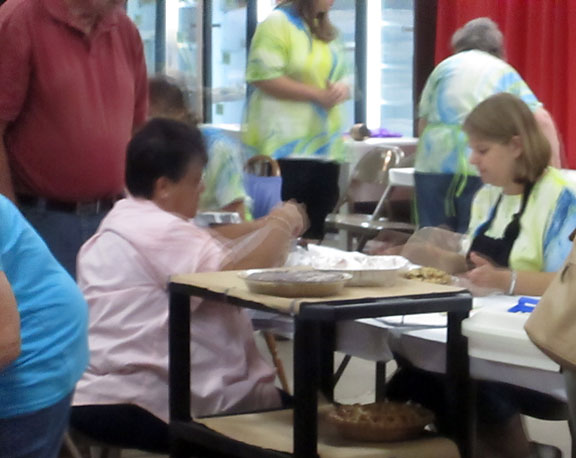 People checking in their food

I had asked my mother to come back with me for company at the judging which started at 1:00 and we settled in to what had been the morning waiting area.  In front of us, there were clusters of judges behind a row of tables, going through different categories, one at a time.  After finishing each category the judge stood up, announced the winners and described the qualities that made them successful as well as what could be improved.  Other than some traditional (non-crunchy granola) bias, this was quite interesting and really made you think about the science behind cooking. 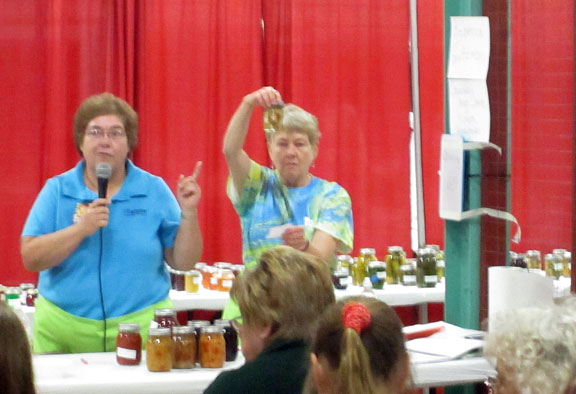 A couple rows in front of us was a woman who seemed to win nearly every third contest.  At one point she passed around one of her losers and people pulled plates and forks from their purses to taste.  Given her record, I was pretty sure that even her “loser” was awesome and really wished I had a plate in my purse.

By 4:15, we were getting tired and decided to call it a day.  Based on the number of entries remaining, this was going to be a long day for the judges and any competitors who stayed to the end.

Interestingly, before the event I had done some Googling for judging criteria and come up empty, but afterwards (with a better choice of keywords) I found a document from the University of Nebraska Extension with a wealth of information.

My whole wheat bread got a 4th place with the comment that it had really good texture for a 100% whole wheat bread (1,2 & 3 were white) and my shortbread got a third.  There were some lovely sounding shortbreads with nice add-ins like cherries and almonds, but the first place entry was simpler and won because it “melted in your mouth.”  I had worked to develop a recipe that would hold a molded shape well, so mine was definitely not going to melt in your mouth but I was happy with the results. 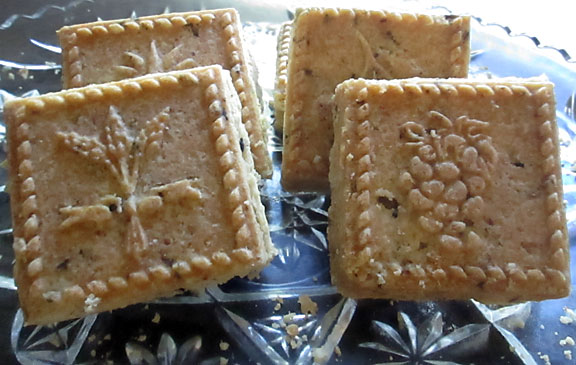 We decided to call it a day before any of the muffins were judged.  The woman next to us offered to call me with my results (people there were really nice) and mentioned that the internet would have results in about a week too.  Having seen the properly domed muffins competing against my flatter (albeit more wholesome) version, I decided I could wait the week.  (Post-note: the muffins placed too–so I’m 3 for 3!)

All in all this was a lot of fun even for a newbie and I am convinced that experience is helpful.  Some entrants had rolling coolers in a cooler storage area and one woman mentioned checking out categories with low entries for a better chance of winning the next year. 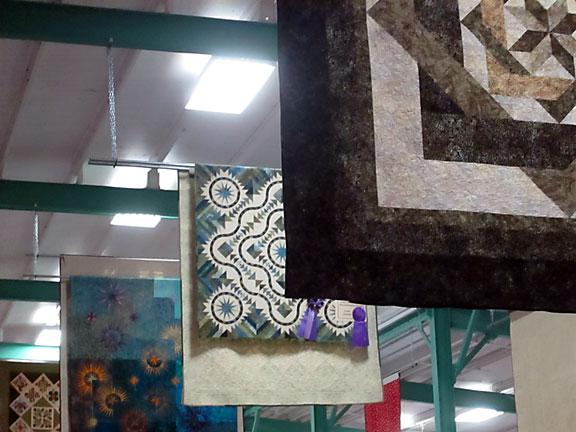 Quilts overhead from a prior judging

I also decided that I am WAY out of touch when it comes to new ideas for vegetables!  Many of the winners in the vegetable categories were fresh salads.  Imagine three delicious sounding Brussels Sprouts Salads!  This is a trend I have to get in on–especially with my membership in two CSAs!

Finally, I learned that it is dangerous to repeatedly test dessert recipes since I have been hovering around my max  ever (while not pregnant) weight.  If I ever do this again, no dessert entries!

Will I try this next year?  I have no idea now.  But if I do, you can bet there will be spare plates and forks in my purse! 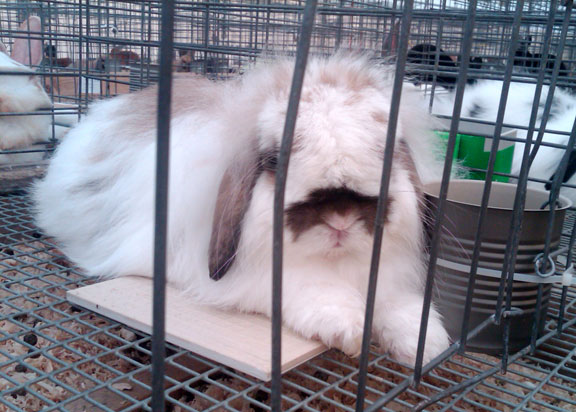 I’ll be back next week to visit the State Fair’s bunnies!