In May we began a kitchen remodeling that was—more or less—finished in July.  My original plan was to write a lessons-learned summary at the point where we were completely done.  That’s right, done–every seam sanded, all nail holes patched, curtains hung. 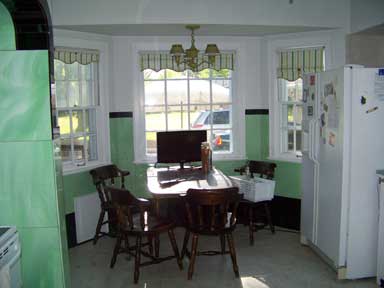 Having spent many years (ok, decades) as an IT professional, I should have known better.  If you leave the documentation (or curtains) to the end, the work drags on like a northern winter.

But I was so anxious to call it done—and it was so close—that I couldn’t help myself.  Come to think of it that’s the same rationale we used on projects.

So, in the interest of continuity, I have decided to do a post now.  With the ceiling unpainted, a decorative alcove unfinished and the adjacent hallway untouched (hold it, that’s a different room, right?), we are happily—and much more attractively—functional! 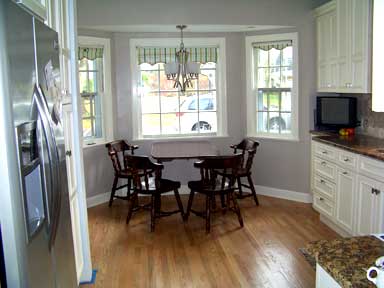 We decided in April to remodel our 1939 kitchen.  We used a designer from a local HOBO store for cabinetry design and spent about a month planning.  I would act as general contractor and use various professionals and an accomplished amateur (my husband) as subcontractors

Included in the remodel were new cabinets, granite countertops, a tile backsplash and a 3/4” oak floor.  We needed to remove soffits and take out a small dividing wall that we thought (insert evil laugh here) had nothing inside of it.  The sink and dishwasher stayed in the same spots, but the oven and refrigerator were relocated.

We hoped to do the project in six weeks from demolition to functionality.  In reality it took eight due to the following issues:

Delay 1:  Cabinets were ordered late because I gave them the wrong ceiling height which required design modifications.  The previous owners had told us the ceiling was 9 ft and it was really 8’ 6”.  Lesson:  Verify everything even if no one has 8’ 6” ceilings (the measurements I actually did were fine).

Delay 2:  We needed to remove a surprise asbestos covered heating duct and re-route the heat.  Who would have thought that the simple little dividing wall on the side of the old pantry would contain that?   Lesson:  Stuff happens; that’s what contingency planning is for.

All in all, I was happy with the timing.  We’ve had simpler, professionally run remodeling projects with worse delays (and poorer excuses).

What was done right

Here are some of the things we decided went well:

I planned a 20% contingency amount into the budget.  At one point I thought this was high.  Nuh-uh.  When the asbestos made its appearance, we were fine; ditto when I had to have the more expensive backsplash.

I used contractors we had worked with successfully in the past and asked around extensively where I needed new ones.  I queued up the contractors early and kept in touch regarding the schedule.

I made sure there were due dates in critical contracts and held our contractors accountable (nicely).  If you had a general contractor, they would be pushing the subs on the schedule and quality control.  If you are the general, this is your job.  And in the end, the bothersome issue nagging at you may be a simple fix for them.

We set up to “hunker down.”  Remodeling can be long and every convenience helps. Examples:

2 thoughts on “Surviving a Kitchen Remodel: Lessons Learned (Part I)”