I was feeling pretty good when we had most of the work on our new kitchen done in approximately 8 weeks. Admittedly there was one wall that still needed the drywall finished and the backsplash tile was pending, but I was in and functioning.  Then the backsplash went in, looked great and I felt fabulous. 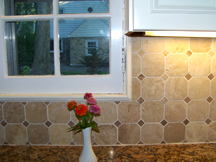 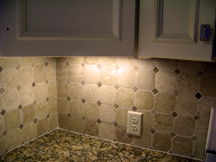 I forgot to knock on wood.

We got home from vacation last week Monday, opened the refrigerator door and the light went out.  I went downstairs, checked the circuit breaker and the switch had flipped.  I flipped it back and it switched off again.  It took both my daughter and me tugging to pull the refrigerator out (of course John had left for work) and I plugged it into a different outlet where it lit up and started humming away.  So I called the electrician.

A few hours later the electrician showed up, checked out the circuit and said he couldn’t find any problems.  Then he leaned over to the refrigerator and said, “You know, the fan is on but the compressor isn’t running. ”  I had been wiping up water that I thought was coming from a leaky hose connection, but I opened the freezer to realize my ice was thawing rapidly.  We thanked the electrician, set the kids to moving the food to the downstairs fridge (since we’d been on vacation, it was fortunately empty), then set out shopping.

We selected our new refrigerator, getting a floor model based on a combination of price and availability, but the earliest they could deliver was Thursday.  So our old fridge sat in the middle of the floor (where we could catch any dripping on our new hardwood) and I went up and down the stairs again to make meals.  When the new refrigerator arrived Thursday  at 4 PM, I rejoiced.

The installers had told us that their energy efficiency caused new refrigerators to cool slowly but when ours was only down to room termperature by Friday morning, we were pretty sure something was wrong.  We were going to be out at State Fair the whole day, so we scheduled a return visit for Saturday morning.

Saturday came but no installer and at 2:30 PM we canceled and went out.  We asked to be first on Sunday.

Sunday AM came and at 10:00 I called.  They had the wrong name but would come back now that they knew who we were.  They came by Sunday afternoon, pulled off a back panel, reconnected something and it started to purr.  Hurray!

You’d think I’d know enough to knock wood by now.  On Monday morning there was a puddle in front of the refrigerator.

We pulled it out and found that this time the hose really was leaking.  The fridge is again sitting in the center of the kitchen with an ice cream pail under the leak.  This one at least John should be able to handle.

On Monday night I opened the mail and found a notice from another appliance store.

Our dishwasher has been recalled.