I have been feeling guilty lately about hijacking a blog focused on all things “green” to talk about my kitchen.   But interestingly, the kitchen remodeling has led me into some new research on garden mulch that I’d like to pass along.

In my never-ending quest to reduce the size of my lawn (aka weeds), I ordered 50 pachysandra plants which arrived last week.  Since these were going directly into a grassy area that I didn’t have the time or energy to dig up I decided to take some of the cardboard from my cabinet boxes and cut it into strips to put down between the rows.  Set in a crisscross pattern, it would make a quick and easy mulch.  Then the grass would decompose below while the new plants were filling out. 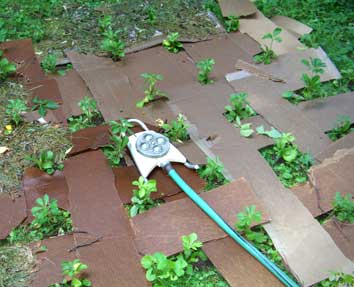 Pachysandra Among the Cardboard

What I have historically done when planting ornamentals is to put newspaper between the plants and cover it with wood chips.  The wood chips look decorative around the ornamentals and the newspaper keeps weeds from popping through for as long as two years.  After this, it decomposes to feed the soil.  Years ago there were heavy metals in the inks but when those were phased out, newsprint seemed like a great option.

Unfortunately, I recently found out that newspaper does contains bisphenol-A (BPA) so I was in the market for a new mulching method.  For those not up to date about this chemical, it is the component in some plastics that was recently banned in baby bottles and certain kids products.  Research also links it to heart disease, breast cancer and other health problems.  So this is not something I want to increase my exposure to!

Rodale recommends using natural organic material.  I have always used straight grass clippings in my vegetable garden and it works great there.  In our damp Wisconsin climate, it seems to mat down enough to form a weed barrier and not fly away.  But I don’t have enough to mulch the whole yard.

So this is where the idea of the corrugated cardboard came in.  I found one reference that said it should be safe, and I felt pretty good.  Of course later, I found another, out of Germany, that implicated the resins (glues) in BPA wastewater contamination.  So I guess the jury is still out on this one.

I will probably continue to use only grass around food crops and cardboard selectively around ornamentals.  Newspaper is now destined strictly for the recycling bin.  And I guess I’ll keep reading to see how all of this evolves.