Did you know you can make homemade organic marshmallows at home?  Here are step by step instructions for Campfire Marshmallows – super fun!

If you’ve been doing it for a while, it’s not too hard to eat organic.  But there are always exceptions.  For us, one of these has been organic marshmallows.  Okay I admit this isn’t one of life’s bigger problems… but it was a fun challenge to solve! 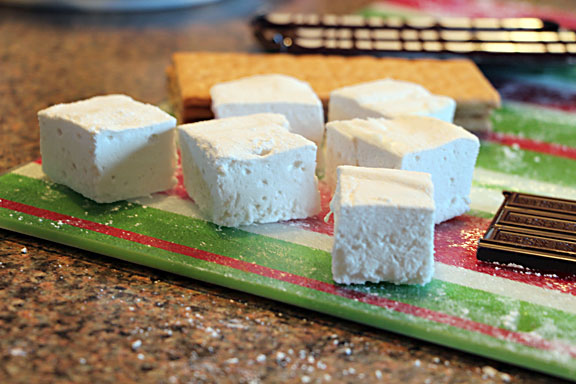 Last Easter I made homemade Peeps, those sugar coated marshmallow duckies and bunnies that are an Easter basket staple.  With summer here, it was time to try again, this time with campfire style homemade organic marshmallows for roasting and s’mores! 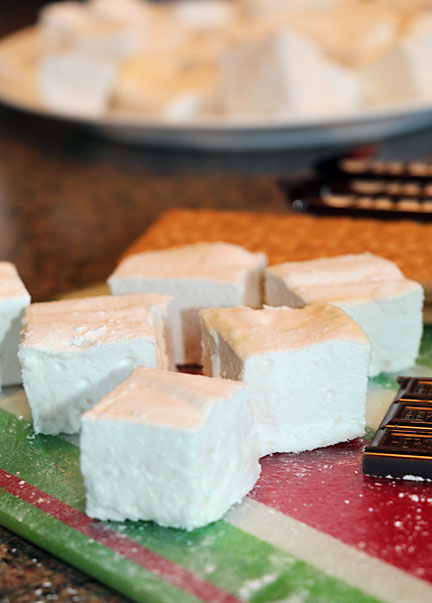 Homemade marshmallows can readily be made with non-organic ingredients, but if you want to go organic the biggest challenges are finding organic corn syrup, which I located at my local health food store, and gelatin, which I ordered from Canada.  Don’t you love the internet?  And I even made it with organic sugar, which sometimes performs differently in candy but this time worked like a charm! 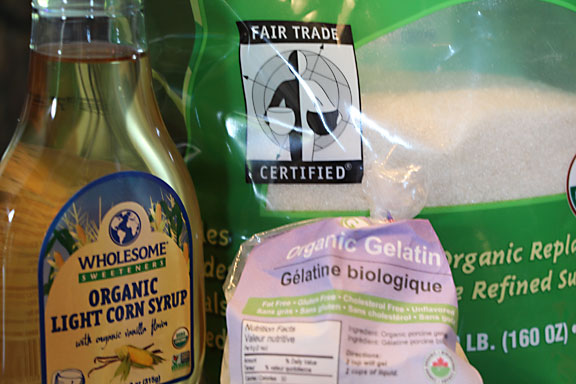 Making homemade organic marshmallows looks harder than it is.  My version is half the original, and made plenty for 6 people to roast and still have leftovers (which the kids cut smaller for hot chocolate, despite the summer weather).  I read through comments on the Epicurious recipe which were helpful and the biggest tip I would have is to make sure you beat the sugar mixture until it holds shape–it will still be sticky but more manageable then. 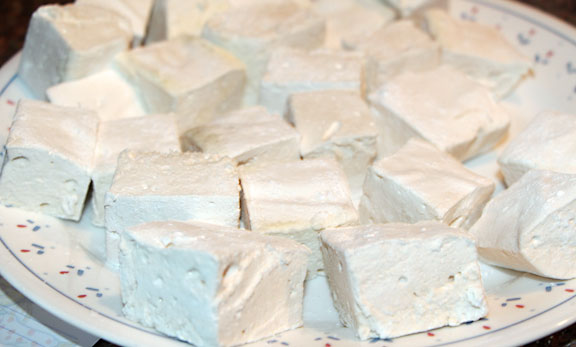 A plate of homemade marshmallows 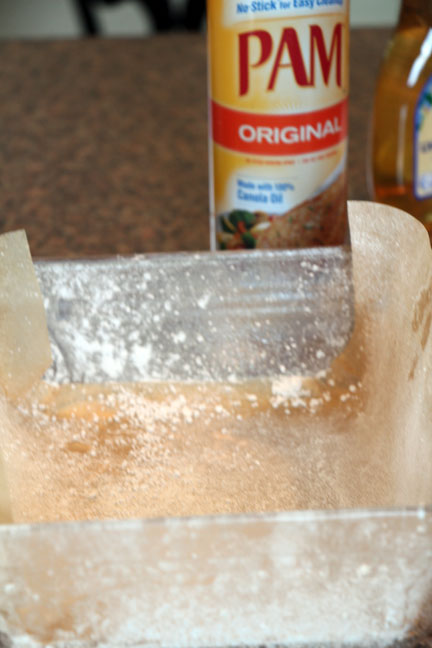 2.  In bowl of a standing electric mixer or in a large bowl sprinkle gelatin over cold water and let stand to soften. 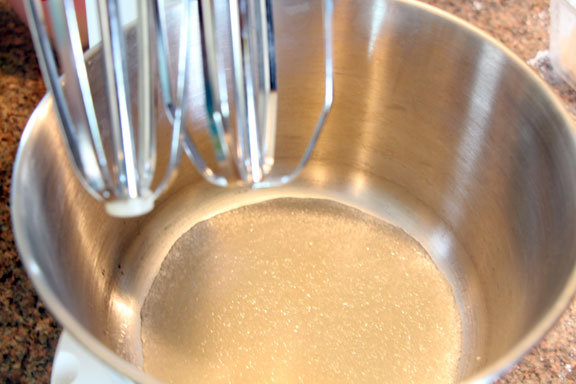 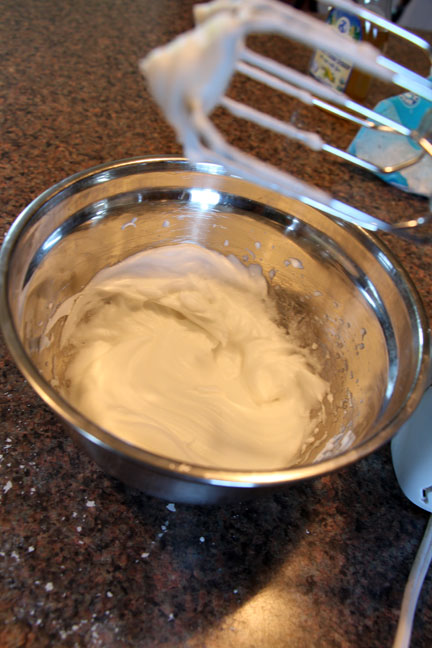 4.  In a heavy saucepan cook granulated sugar, corn syrup, 1/4 c water, and salt over medium heat, stirring until sugar is dissolved. Boil mixture, without stirring, until a candy or digital thermometer registers 240°F., about 12 minutes. 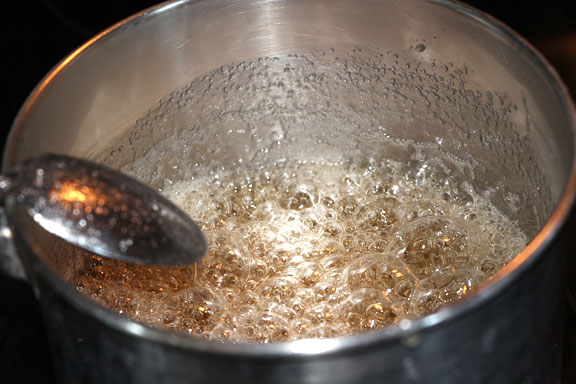 5.  Remove pan from heat and pour sugar mixture over gelatin mixture. Beat mixture on high speed until white and thick, about 6-10 minutes, depending on mixer power. Mixture should hold shape when you stop beating. 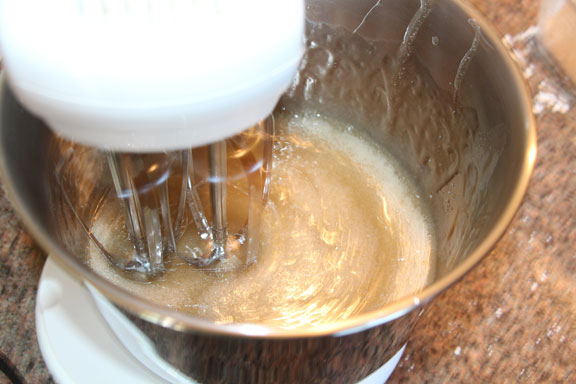 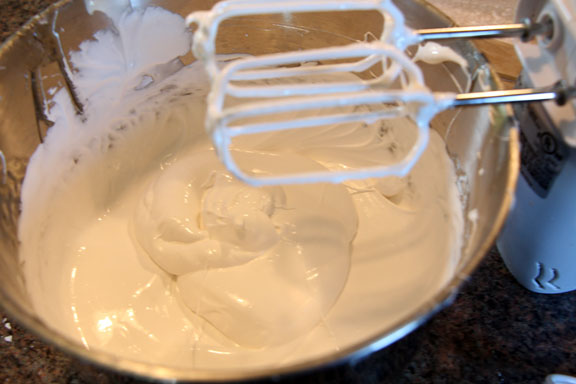 Ready when it holds shape

6.  Add whites and vanilla to sugar mixture and beat until just combined. Pour mixture into baking pan and sprinkle a layer of powdered sugar over top. Chill marshmallow, uncovered, until firm, at least 3 hours, and up to 1 day. 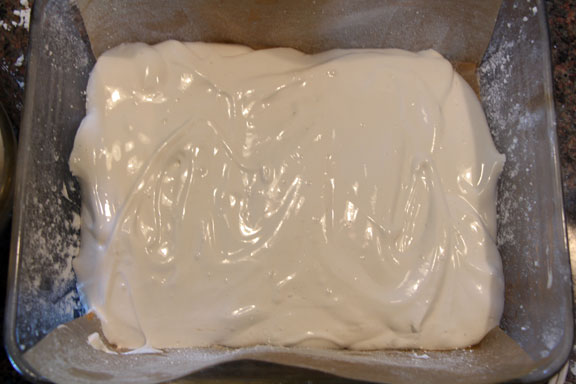 7.  Run a thin knife around edges of pan and invert pan onto a large cutting board (or pull out with edges of parchment paper if you used that). With a large knife cut marshmallow into roughly 1-inch cubes. Coat cut edges of marshmallows with additional powdered sugar.  Marshmallows keep in an airtight container at cool room temperature 1 week. 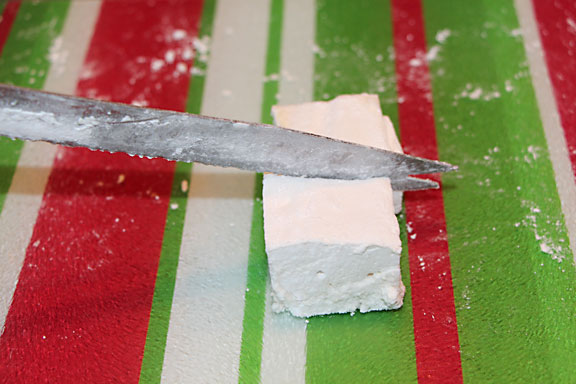 To make s’mores, roast a marshmallow until soft and golden, then “squish” it between two graham cracker squares with a couple sections of chocolate candy bar.  Interestingly we made these last Saturday which Louise of Months of Edible Celebrations tells me was National S’mores Day! 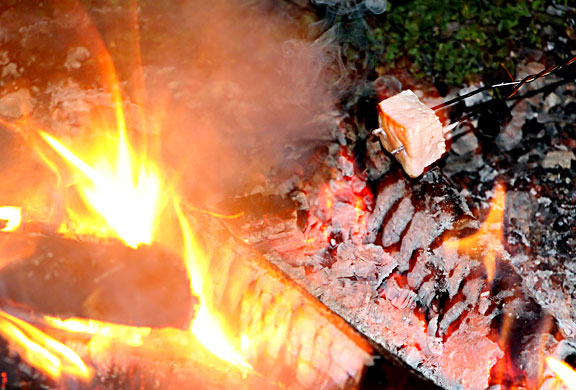 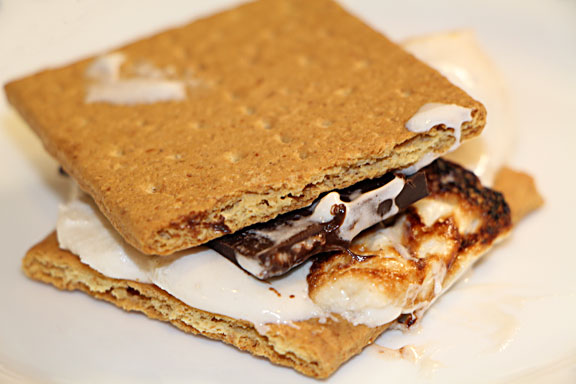 Ah yes, one of the true joys of summer!