Blackened Chicken is a spicy and flavorful main dish from Cajun country. Add simple sides like coleslaw and corn bread for a quick & easy dinner. 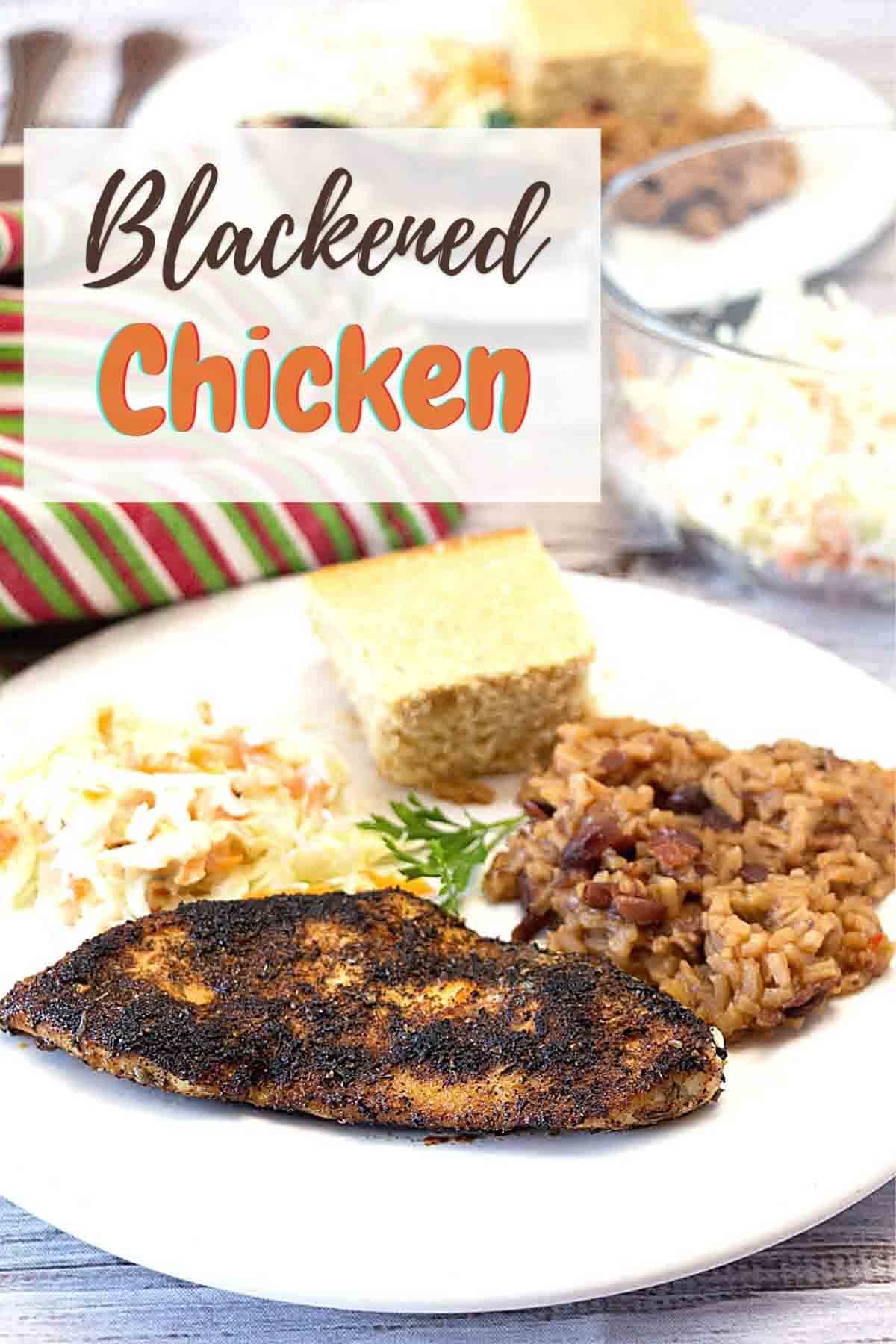 I’d eaten blackened dishes out many times. From seafood to chicken, maybe an occasional blackened steak, it was always a food I enjoyed.

But I’d never tried it myself. I’m not even sure now what I feared. Having to buy too many spices? Killing off my spice-averse husband? Setting the kitchen on fire?

Well I’ve done it now and I can tell you there is nothing to fear. And I can’t wait to “blacken” something else! 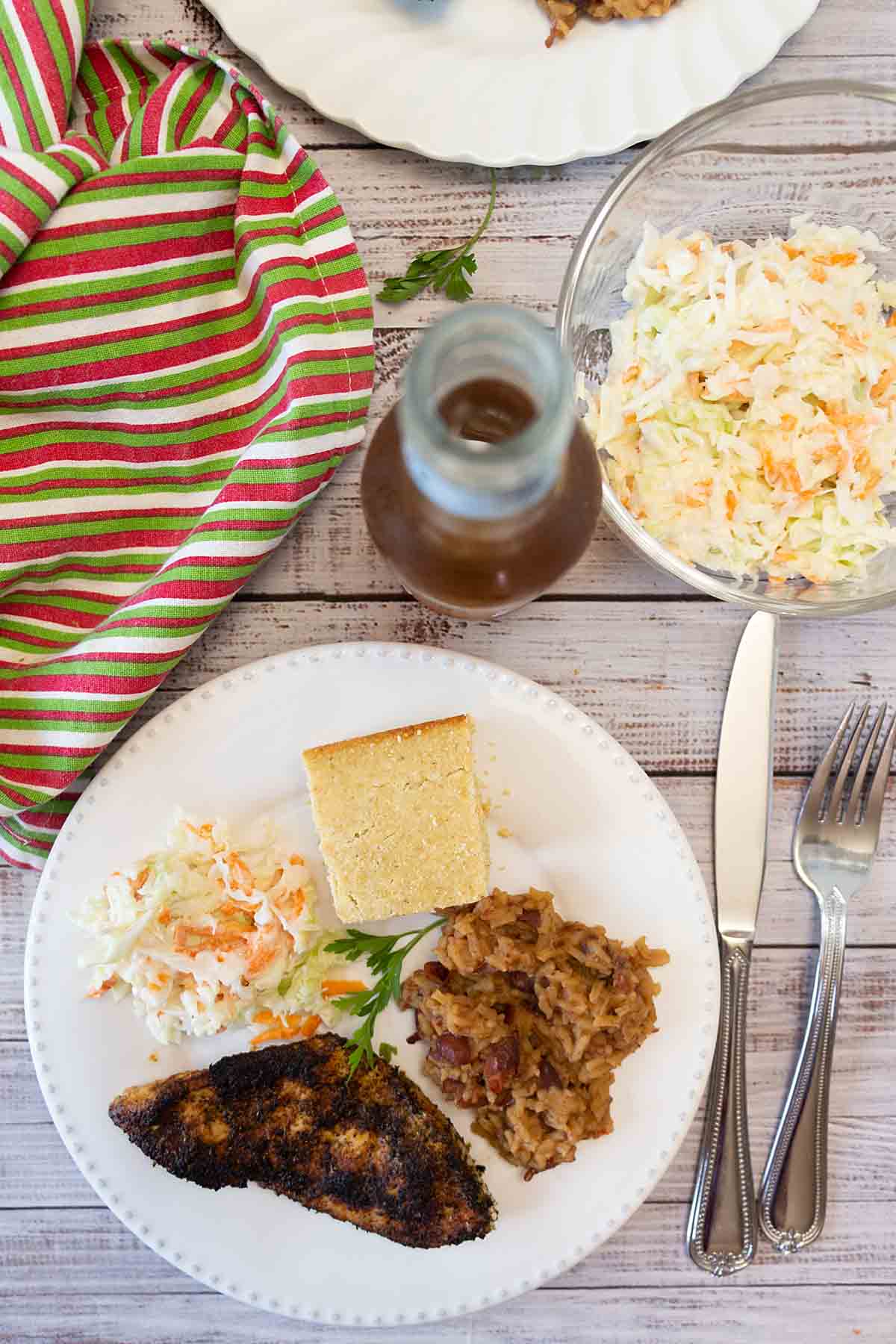 What is Blackened Chicken

The original “blackened” dish wasn’t chicken at all, but a fish.

Per the NY Times, Chef Paul “Prudhomme dipped redfish fillets in butter, dusted them with ground cayenne and a mix of dried herbs, and seared them in a red-hot iron skillet until a black crust formed.” 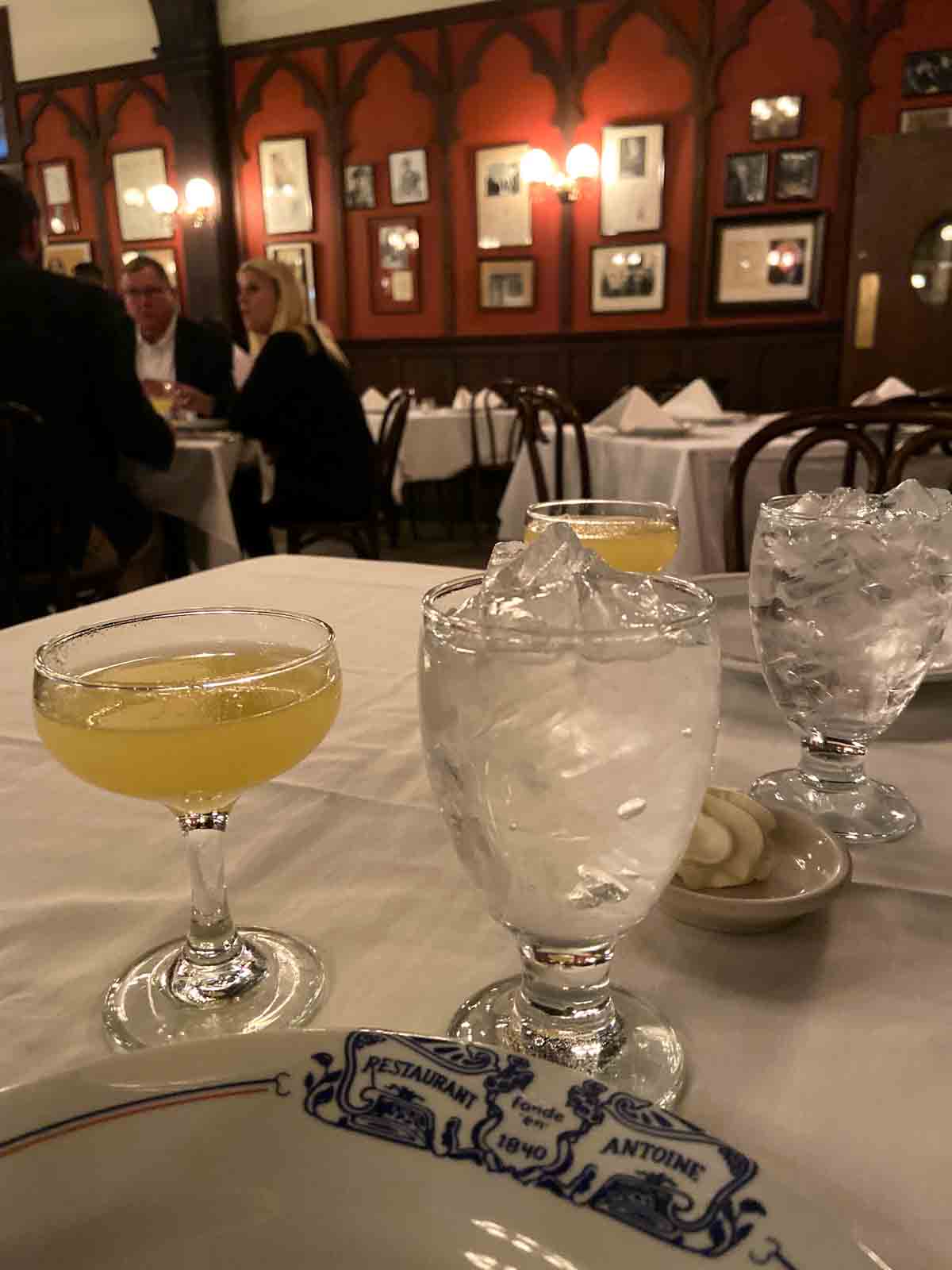 As the Cajun-inspired dish took off, restaurants everywhere got creative. And dishes like blackened chicken and blackened prime rib hit menus all over.

Who can argue with versatility I guess!

What Makes This Dish a Winner

What is in Blackened Seasoning Mix?

As I scoured the Internet there was a remarkable consistency in the types of spices in different Blackened Seasoning Mix spices. And they were all pretty typically found in your ordinary kitchen spice collection. Hooray! 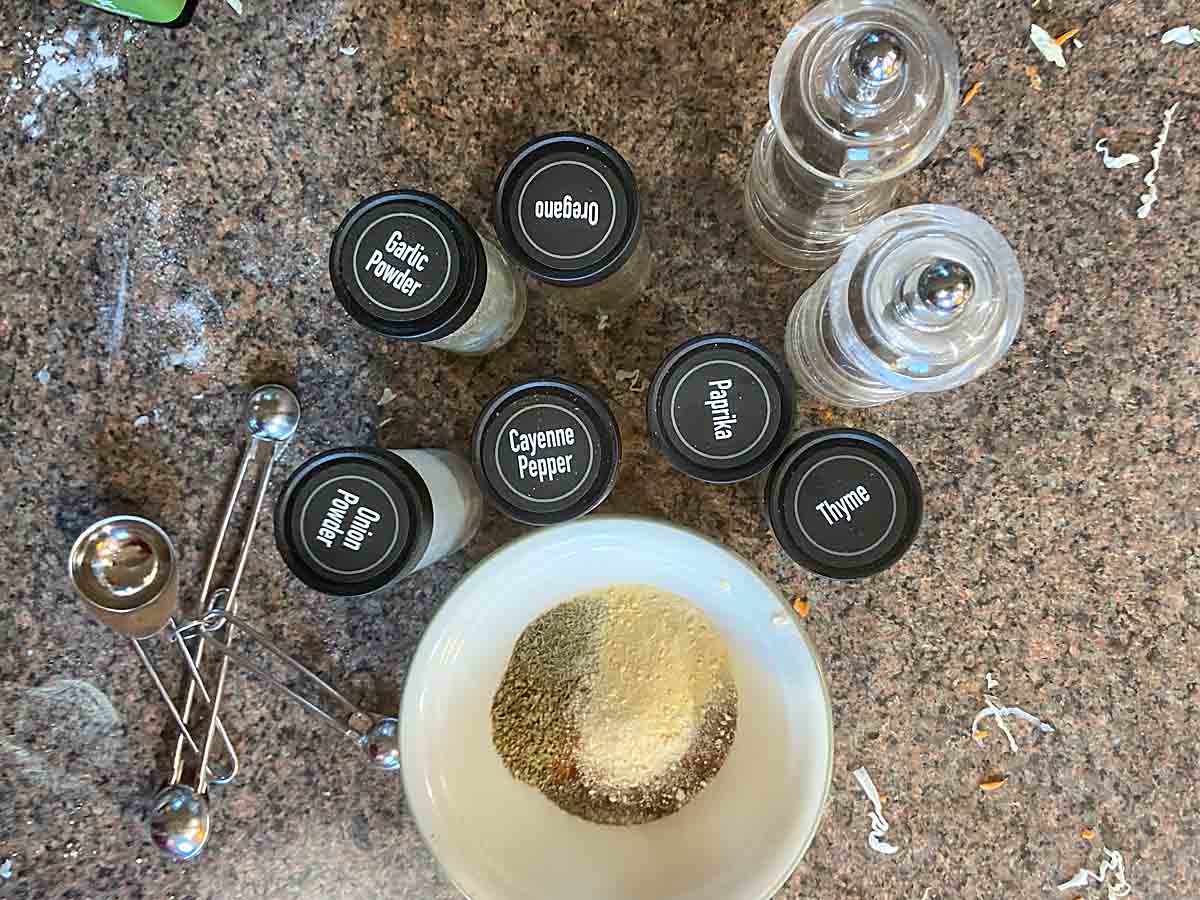 Blackened chicken is super quick and easy.  The hardest part is opening the windows to deal with the smoke if you can’t cook outside!

Slice chicken breasts thin for a quick even cook. 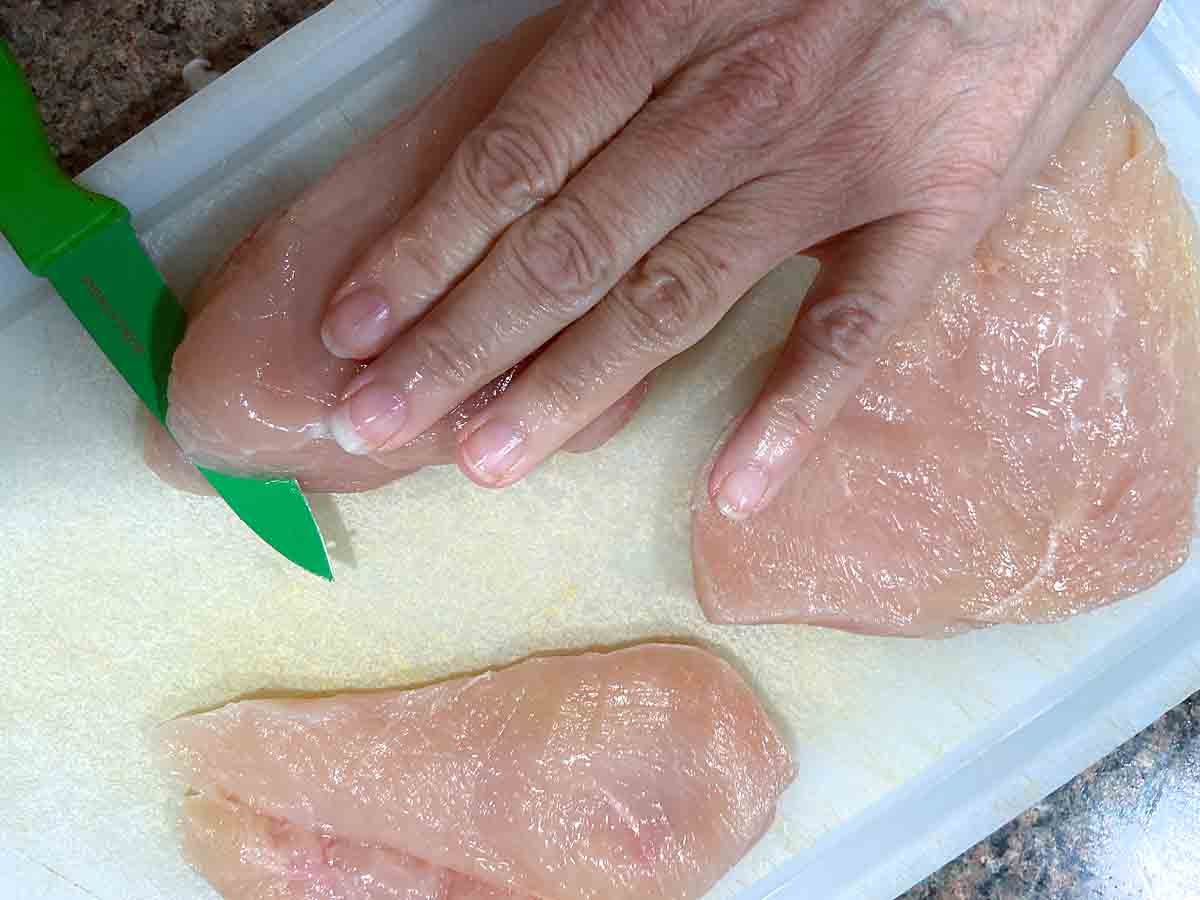 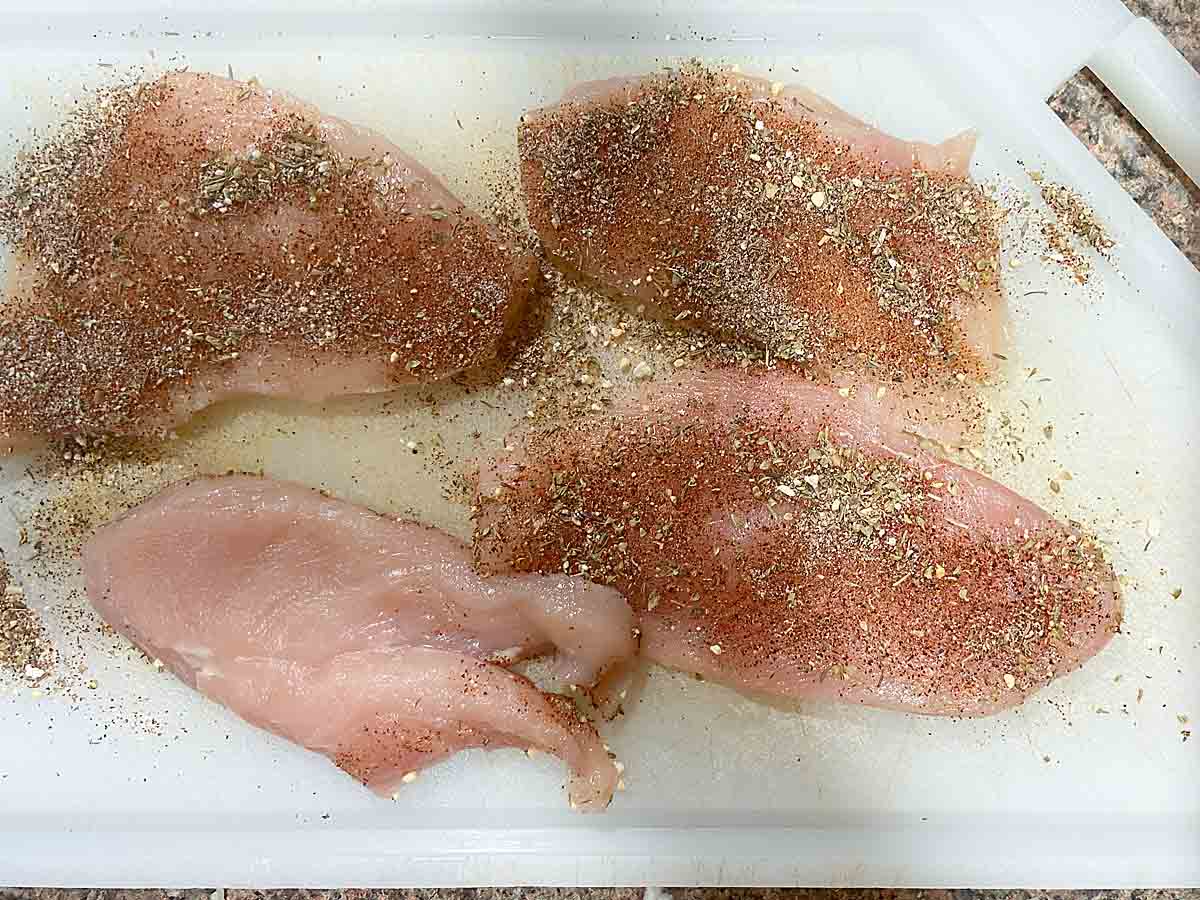 Sear in hot skillet turning after a few minutes to char both sides. 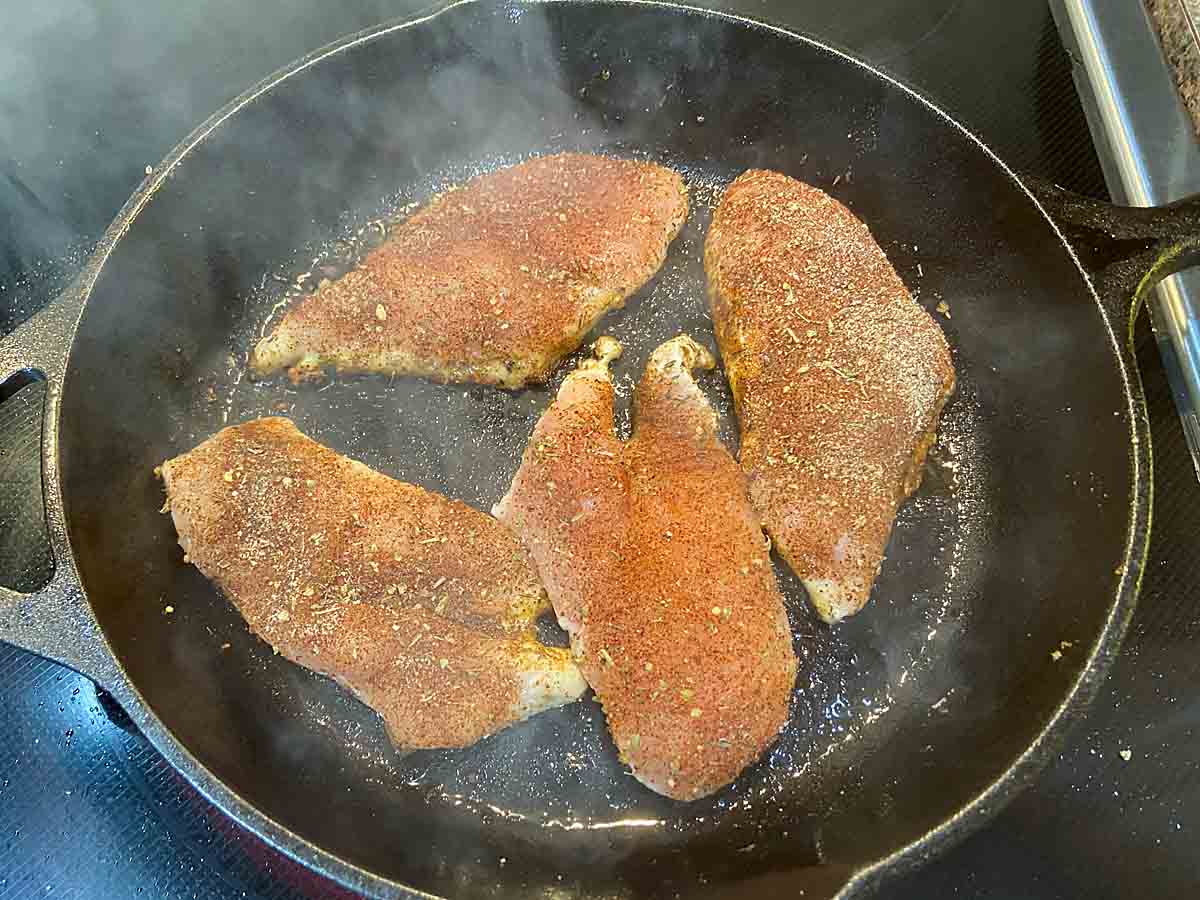 When the internal temperature reaches 165, it is done!

What to Serve With This

It’s nice to keep with a Cajun theme if you can in your sides. You might consider:

In fact I think we had as much fun with the sides as the Blackened Chicken itself. 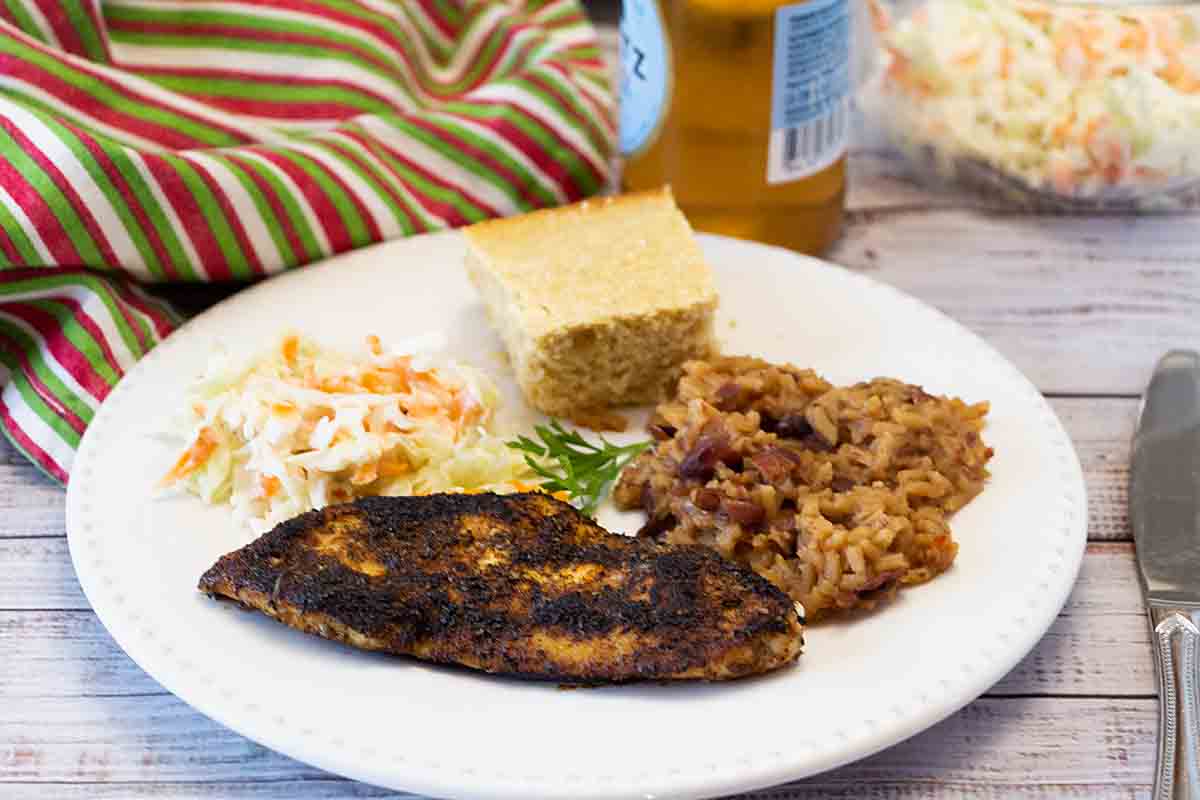 I served the Blackened Chicken as a simple entrée, but there are many other ways you could serve it. These include:

You can even change up your meat and blacken steak or (duh) seafood. 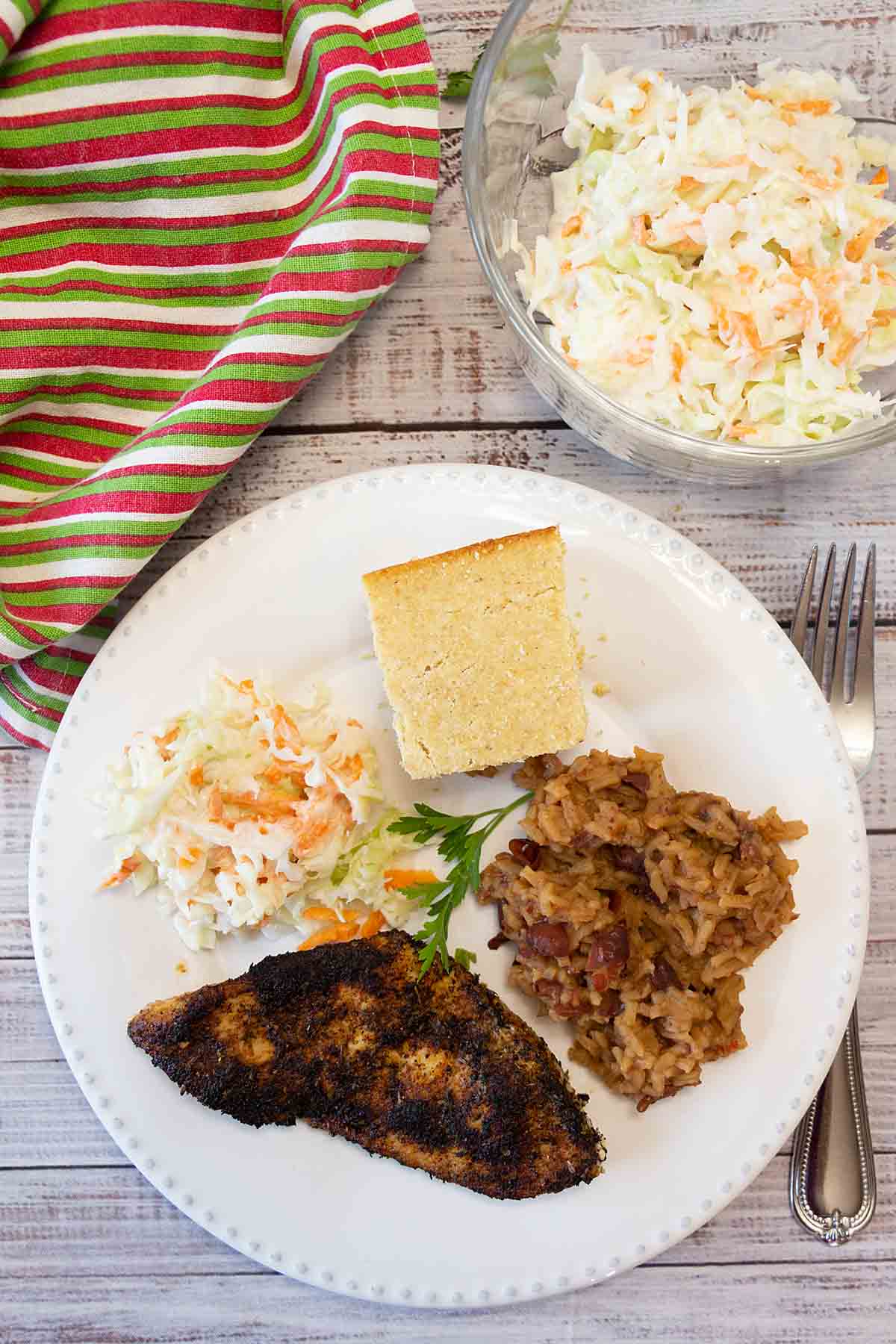 I typically cut large chicken breasts in half to make thinner cutlets. They cook more quickly and evenly this way and are a better serving size than an 8 ounce portion. If there is still a big difference in thickness, I may even pound them for more evenness (I didn’t need to do this today). 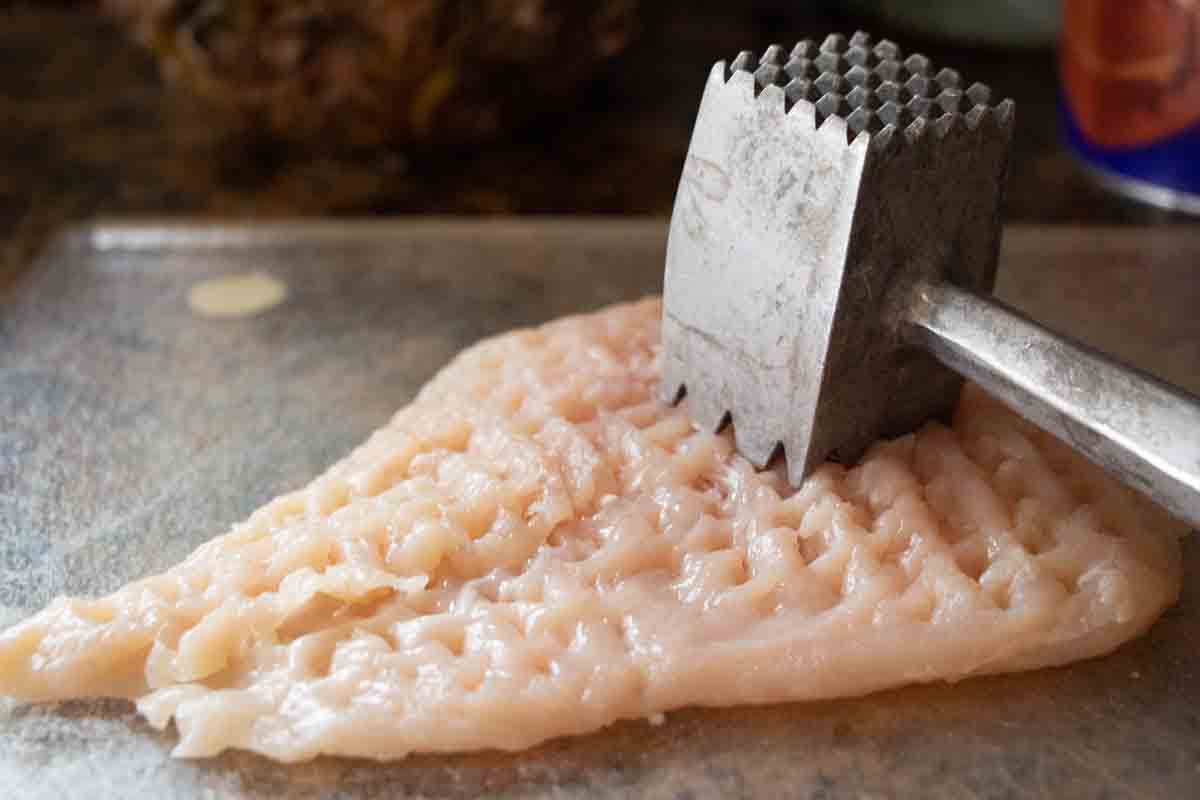 Beware of smoke. Many people recommend cooking this outside (still in a cast iron pan for the char) or at the very least shutting off the smoke detectors. We opened the windows to help with the smoke and I was exited that this seemed to be working. Then my daughter came down from the second floor to complain she couldn’t breathe up there and I knew where all the smoke had gone. Best laid plans 🙂

What if I don’t have a cast iron skillet? Blackened Chicken is traditionally cooked in cast iron but a second choice would be a quality stainless steel pan.  Given the high heat, I would not use a non-stick pan.

Huge amounts of butter are used in the traditional preparation of this dish, both for coating the chicken first, then for frying.  I chickened out (no pun intended) and applied the spice mixture directly to the raw chicken then used Pam for the frying.  Yes, butter would create even more smoke. 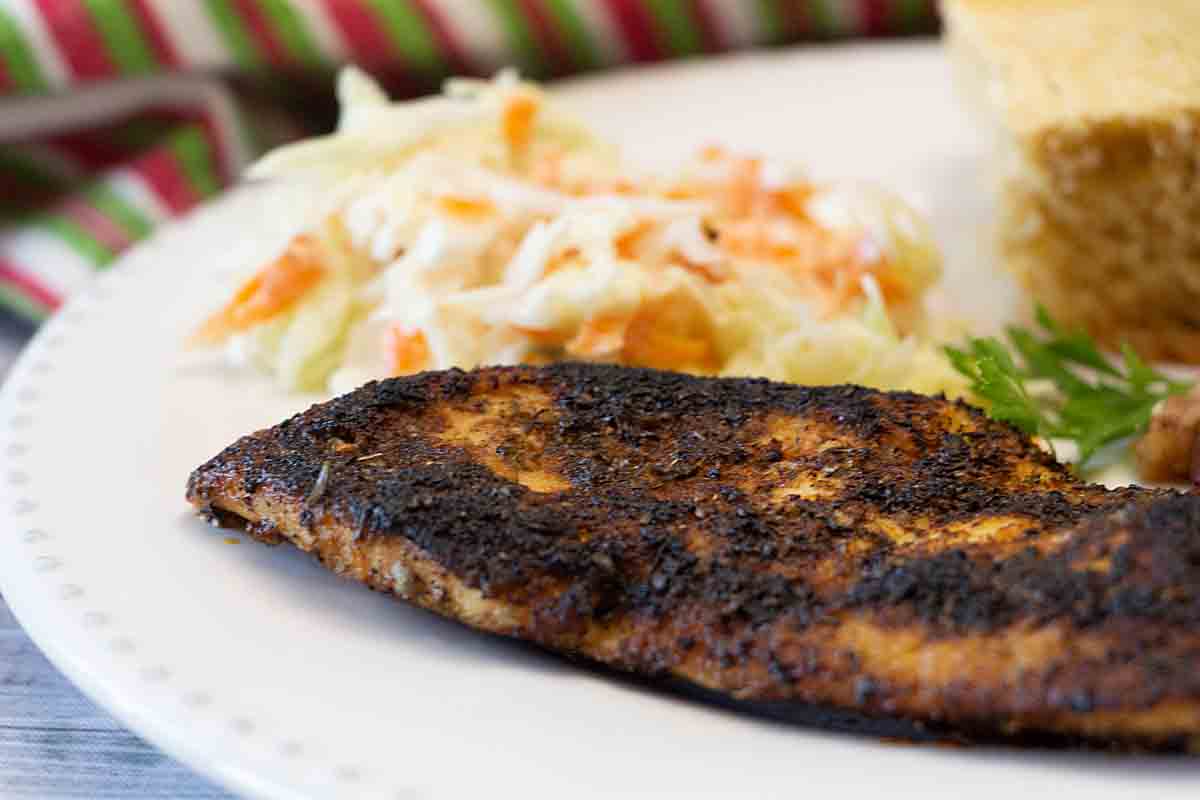 Butter is supposed to be needed for the char but, as you can see, mine got a nice char just using non-stick spray.  I intend to try with butter next and will report back on the differences.

This gets very smoky and many people recommend cooking outside.