It was summer when I bookmarked the recipe that inspired my Orange Coconut Tart.  I figured I would try it when the oranges came in this winter. 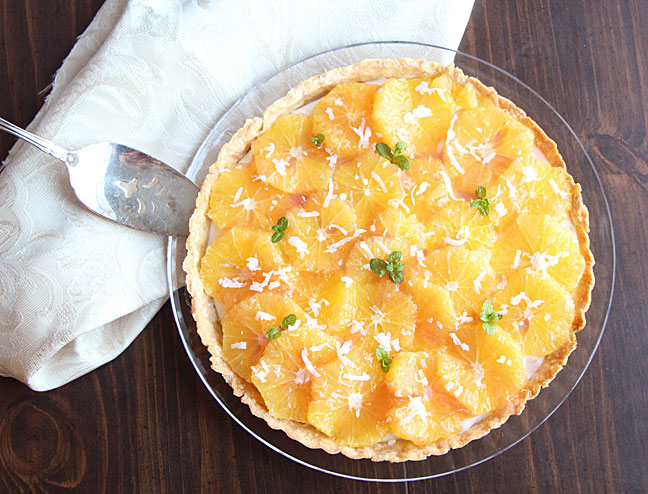 My version is simpler to make than the original and uses a coconut “custard” instead of vanilla.  Paired with sliced oranges, the coconut had a tropical feeling that almost transported us away from winter!  (See recipe notes for a vanilla “custard” substitution) 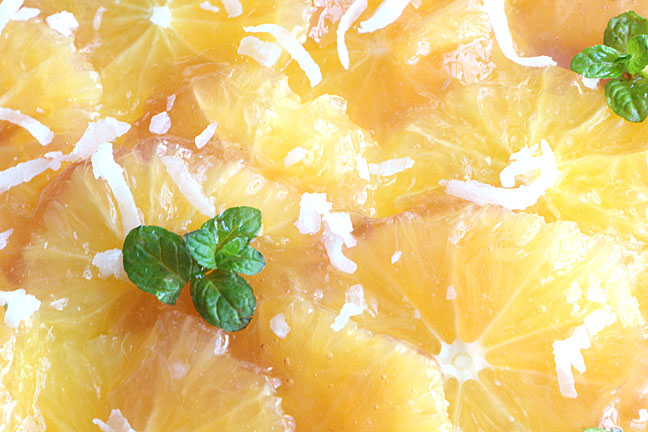 This tart comes together in three simple steps (some of which can be done ahead) so is easy enough to do before a busy brunch!

I started with a store bought refrigerated crust, which I pre-baked in a tart pan.   For a vegan version, you could substitute your favorite vegan crust, since there are no animal products in the rest of the dessert. 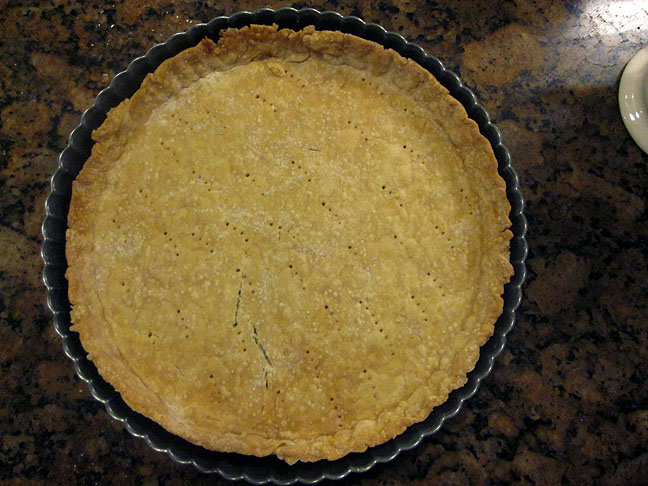 Next I cooked up the coconut cream bottom layer which has only three ingredients–a can of coconut milk, some cornstarch and a mere 1/3 cup of sugar!  (Misc food fact–did you know that the ratios of cornstarch as a thickener are 1 T cornstarch/1c liquid for a thinner sauce, 2T/1 c for a thicker gravy, 3T/1 c for a thick pudding-like end product?).  After cooling the crust and custard, I spooned the custard into the crust. 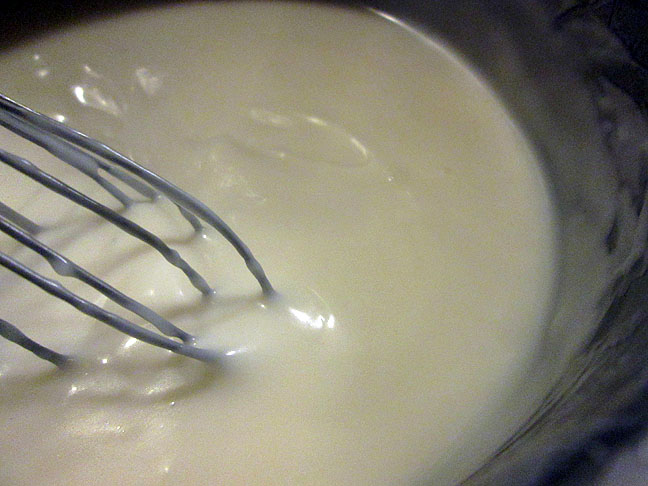 Finally I prepared the oranges.  Instead of peeling, I used a knife to cut off the outer layer to avoid any bitter pith.  I sliced them and placed them over the “custard” and topped with warm diluted jelly.  The original called for apple jelly but I didn’t want to run to the store, so used the violet jelly I canned last May.  Yes, purple jelly on an orange tart and it looks fine–life is a wonder! 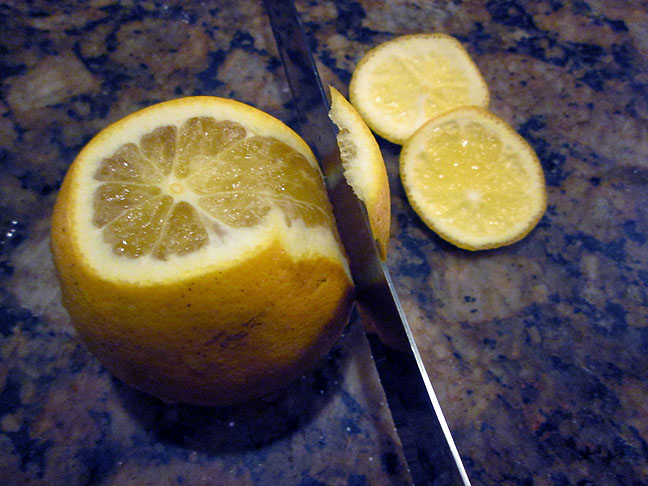 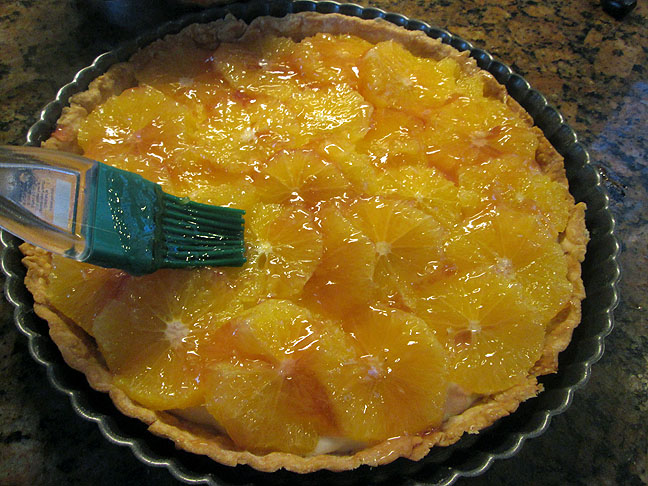 The only complaint I have is that an uncooked orange isn’t “fork tender” so this needs to be served with a fork and butter knife.   But once in your mouth each bite dissolves into a flavorful  burst of summer.  Perfect for a seriously wintery winter! 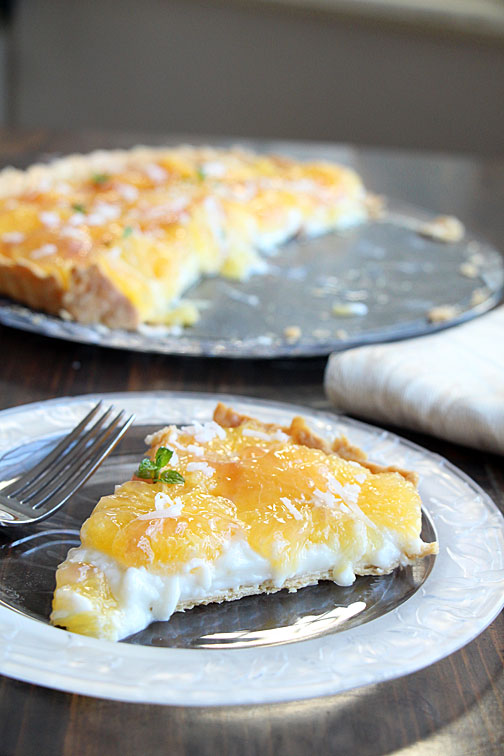 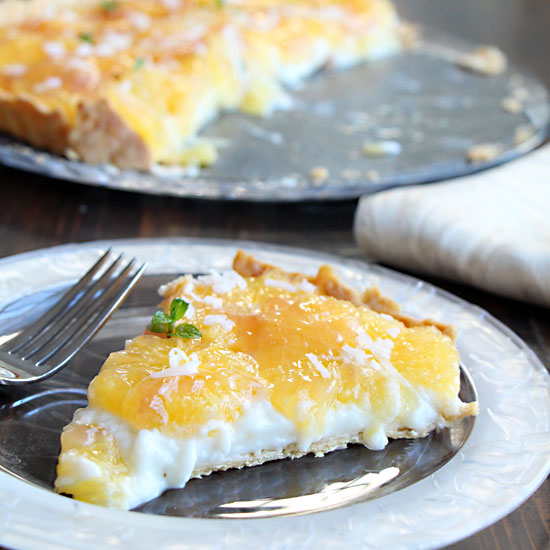