Creamy and flavorful, Pumpkin Ice Cream is a tasty fall dessert of snack with a little extra nutrition thrown in! 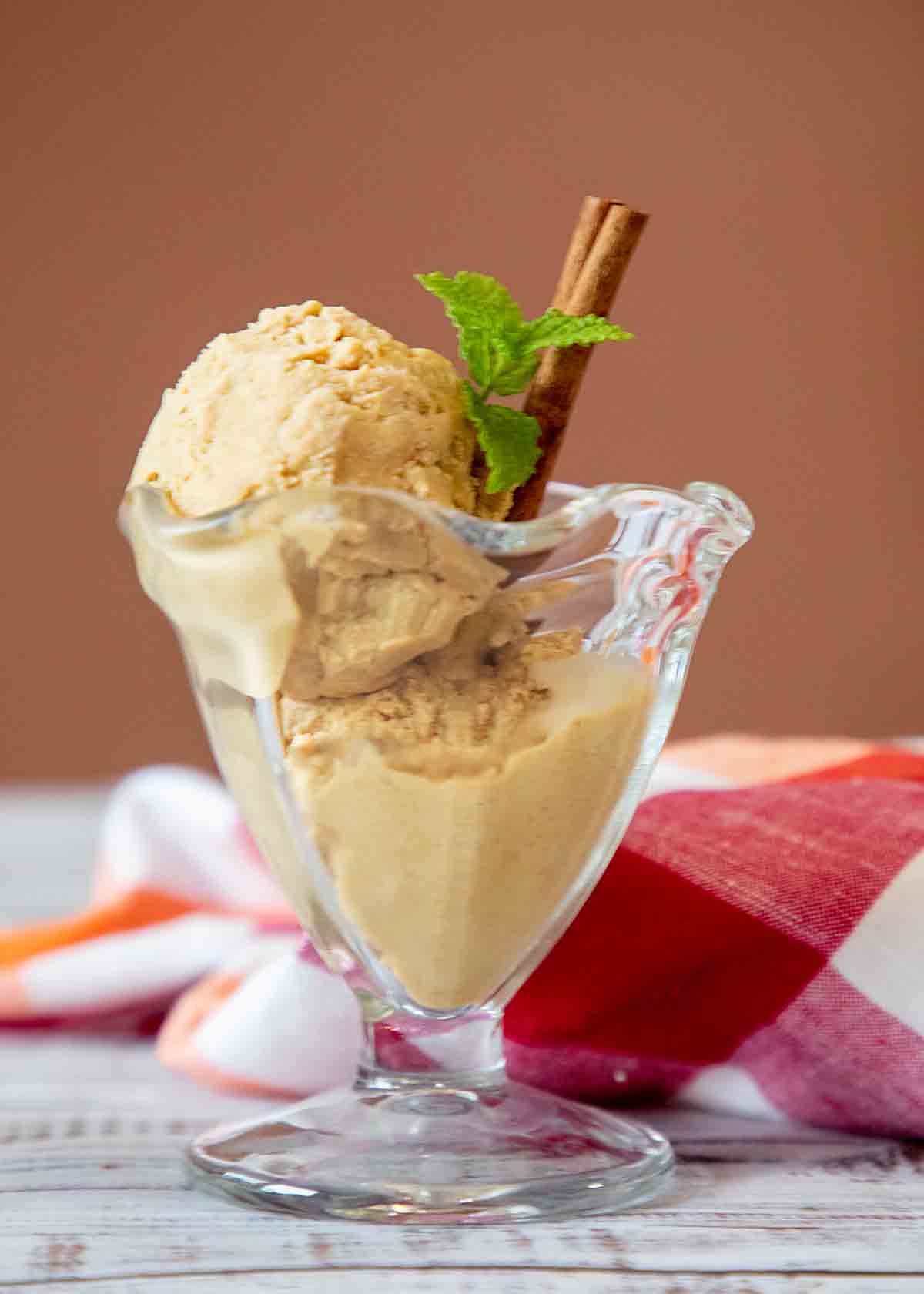 Pumpkin Ice Cream is one of my favorite fall treats!  Usually I head to Baskin Robbins, but sometimes I make my own.

I love the idea of controlling the ingredients in homemade ice cream.  Organic cream, real pumpkin, NO carrageenan.  And how many desserts have good dose of vitamin A? 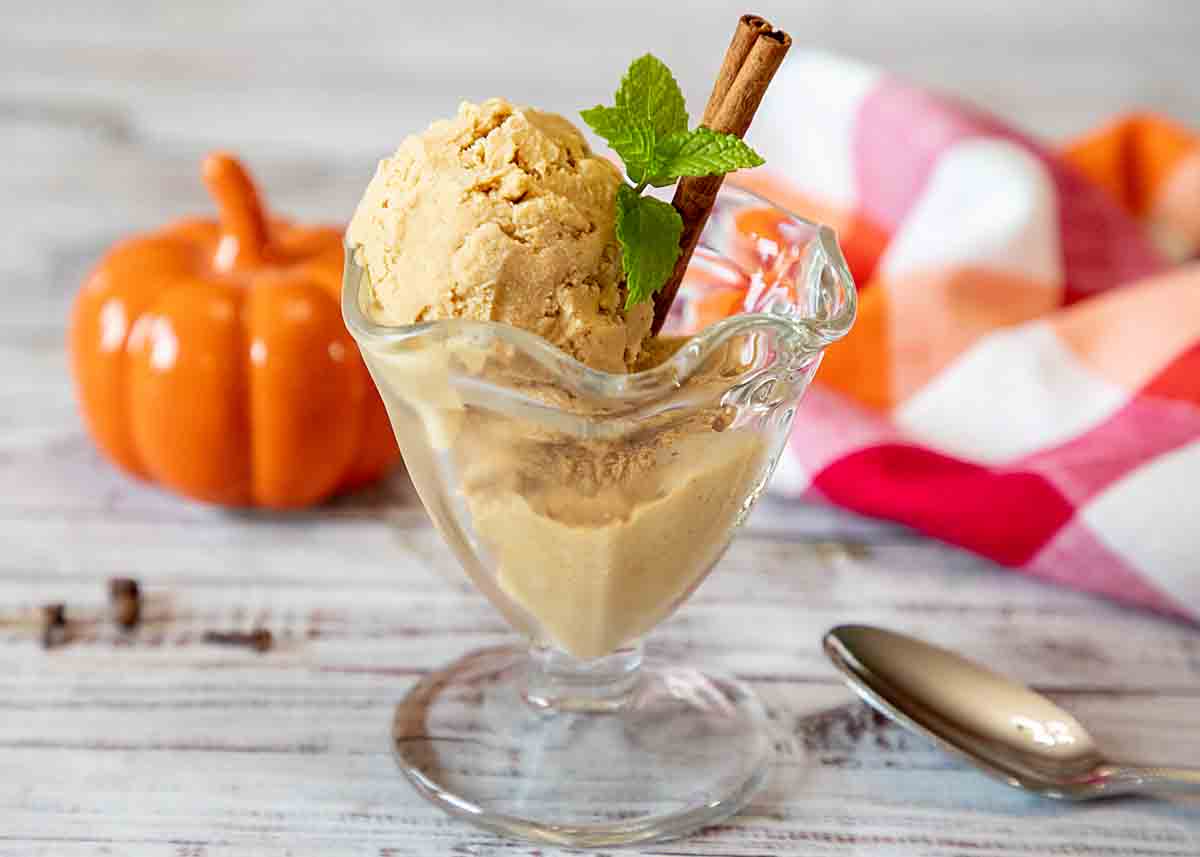 What is the biggest homemade ice cream challenge?

Anyone who’s eaten homemade ice cream probably knows what I’m about to say.  It’s that fact that homemade ice cream is amazing when scooped right out of the machine.  But put the leftovers in the freezer and the next day, they end up rock hard and icy.  Not fun.

That’s because ice cream relies on a mysterious proper ratio of fats to liquids to thickeners.

And here’s where the theory behind Jeni Britton Bauer’s ice cream comes in.  Besides providing complete tested recipes, Jeni’s Splendid Ice Creams at Home discusses how to keep homemade ice cream from getting too hard and too full of ice crystals.  It’s what I based this ice cream on! 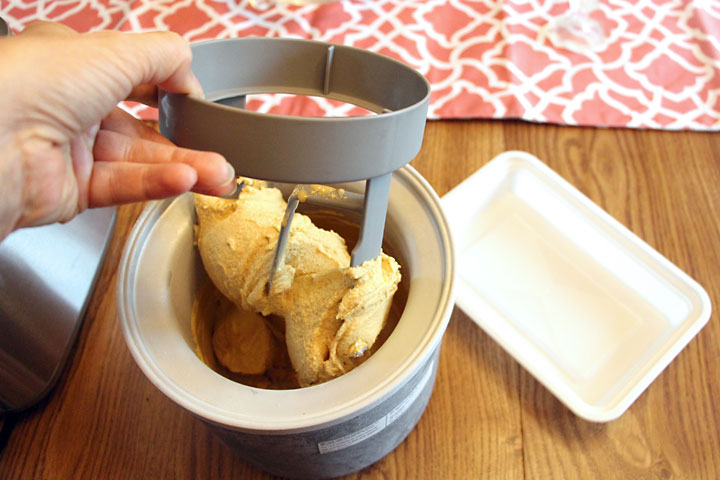 Tasty.  Combine the great flavors of pumpkin (with spice) and ice cream and you have a perfect fall dessert!

Healthier.  I love it when I can get (even a little bit of) vegetables or fruit in my dessert! 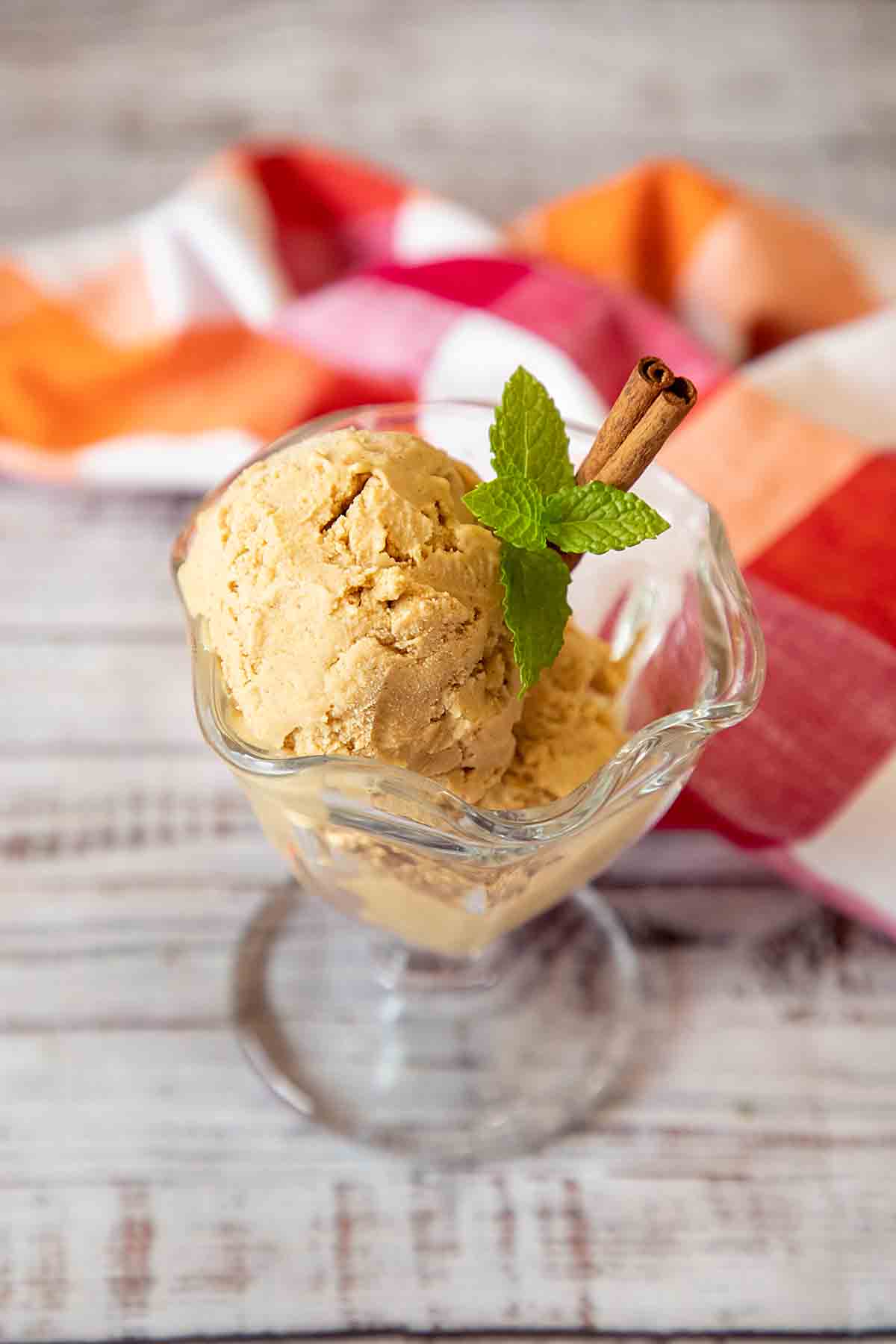 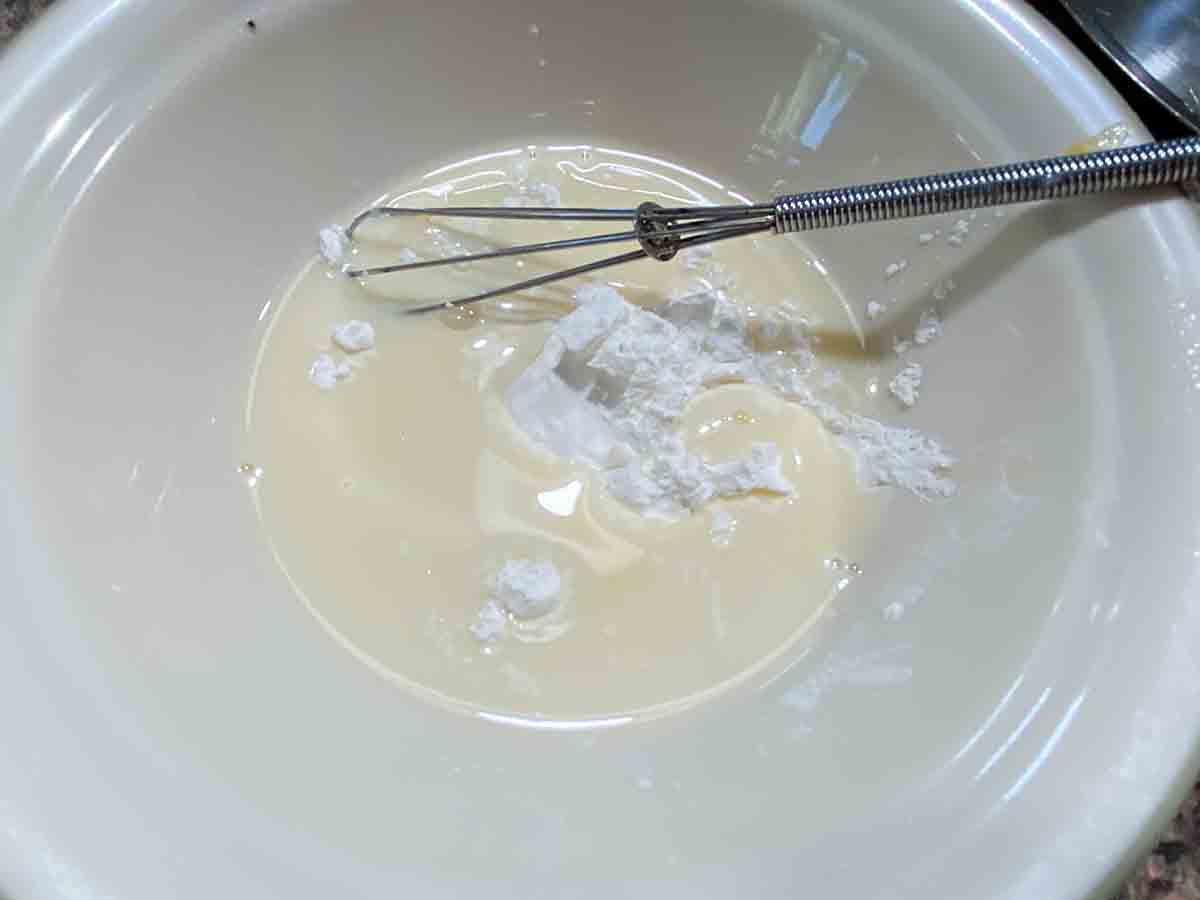 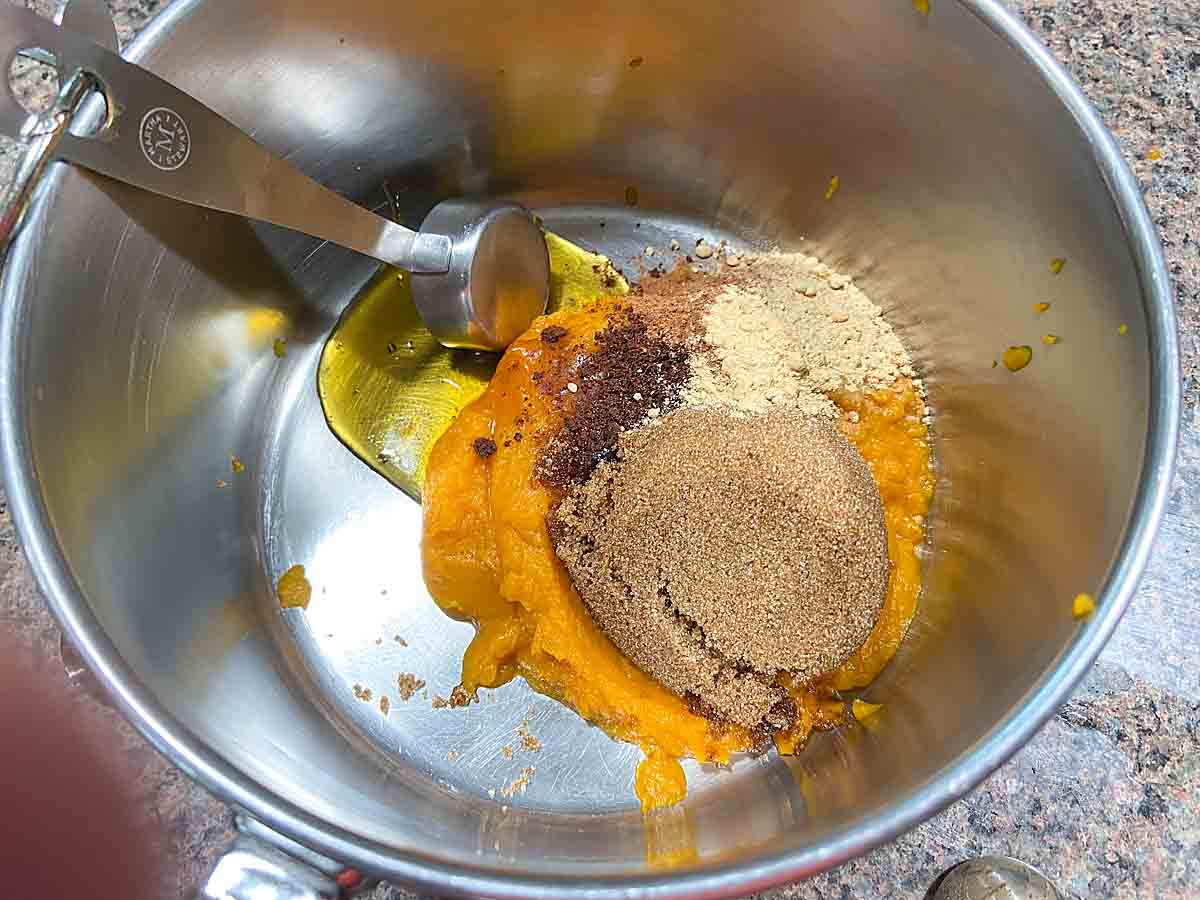 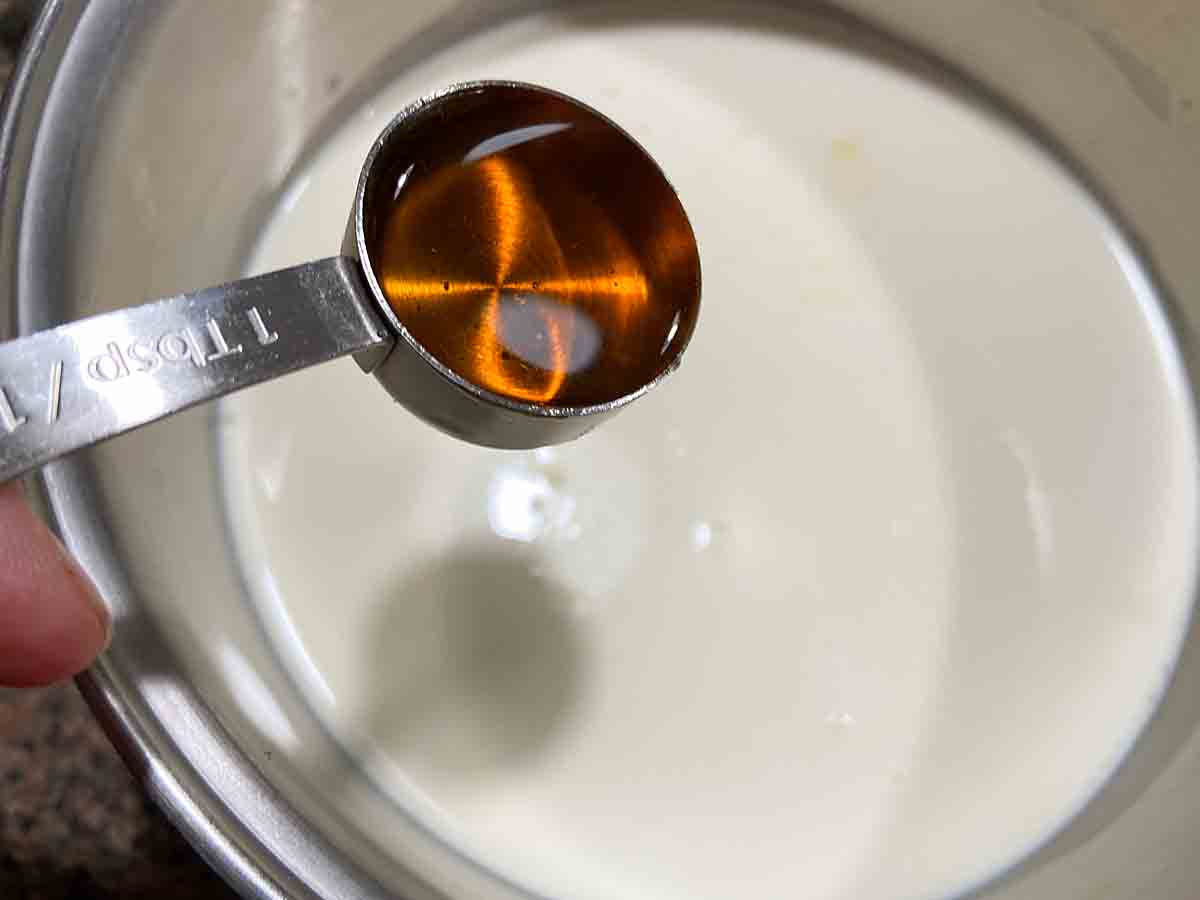 Stir the pumpkin puree mixture and cornstarch slurry into the ice cream base, then return to heat. 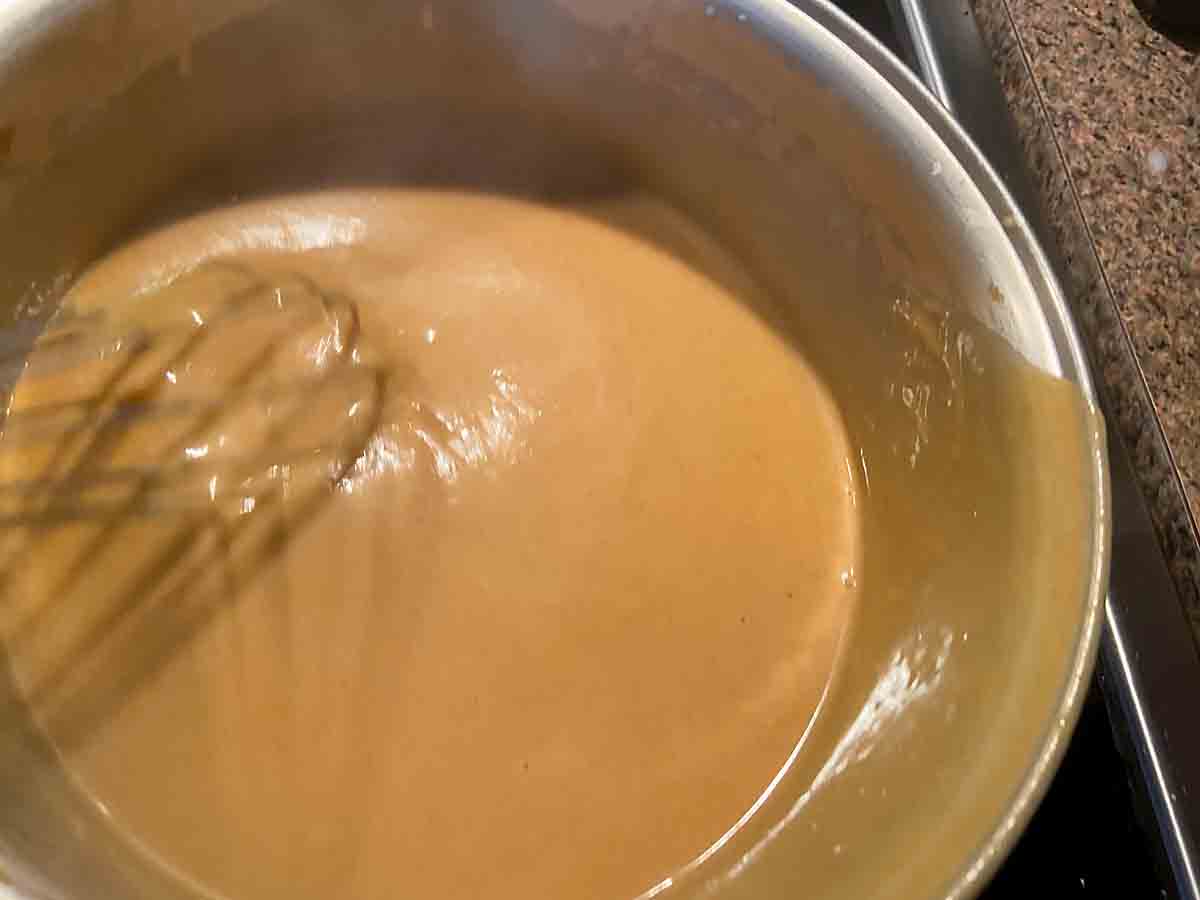 Gradually add to the softened cream cheese, whisking to avoid lumping. Mix in rum if using. 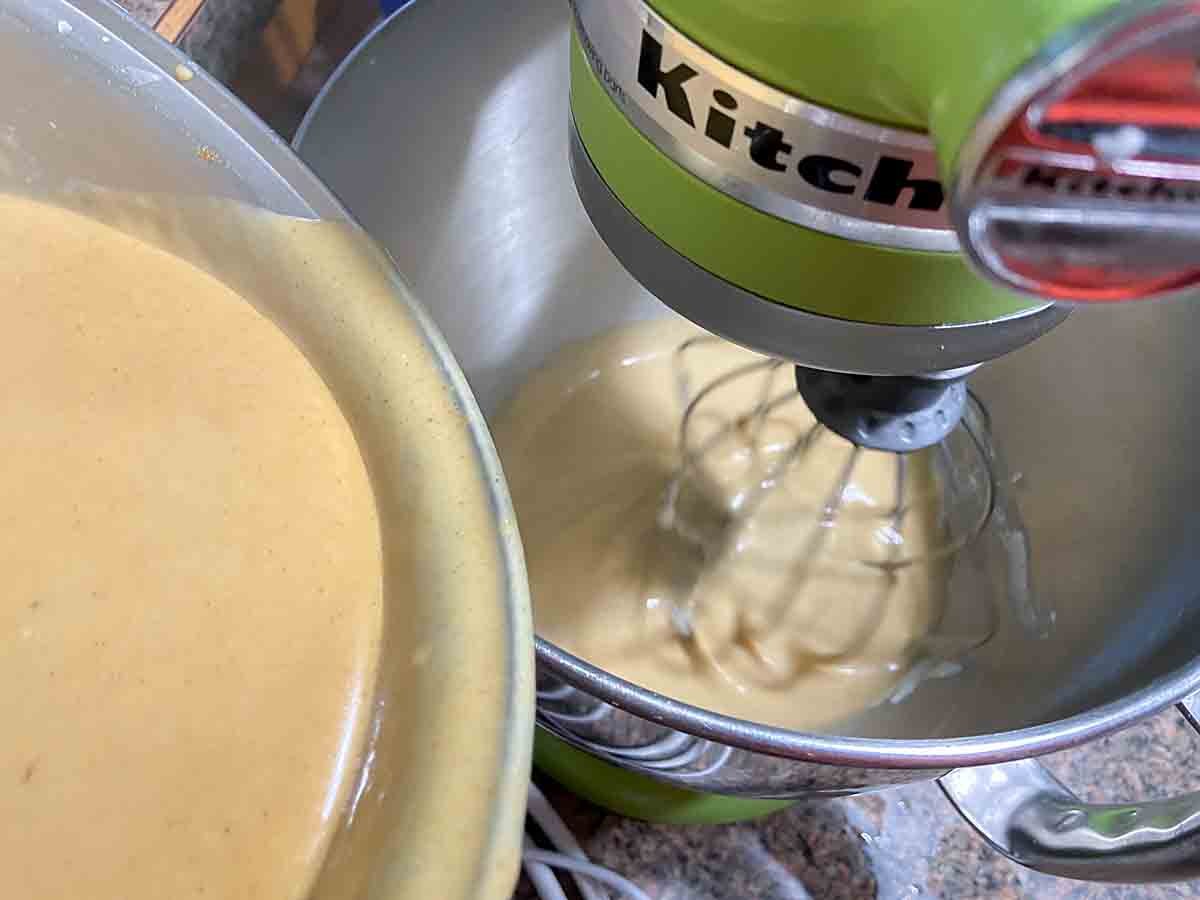 Chill until cool. Freeze according to your machine’s directions. 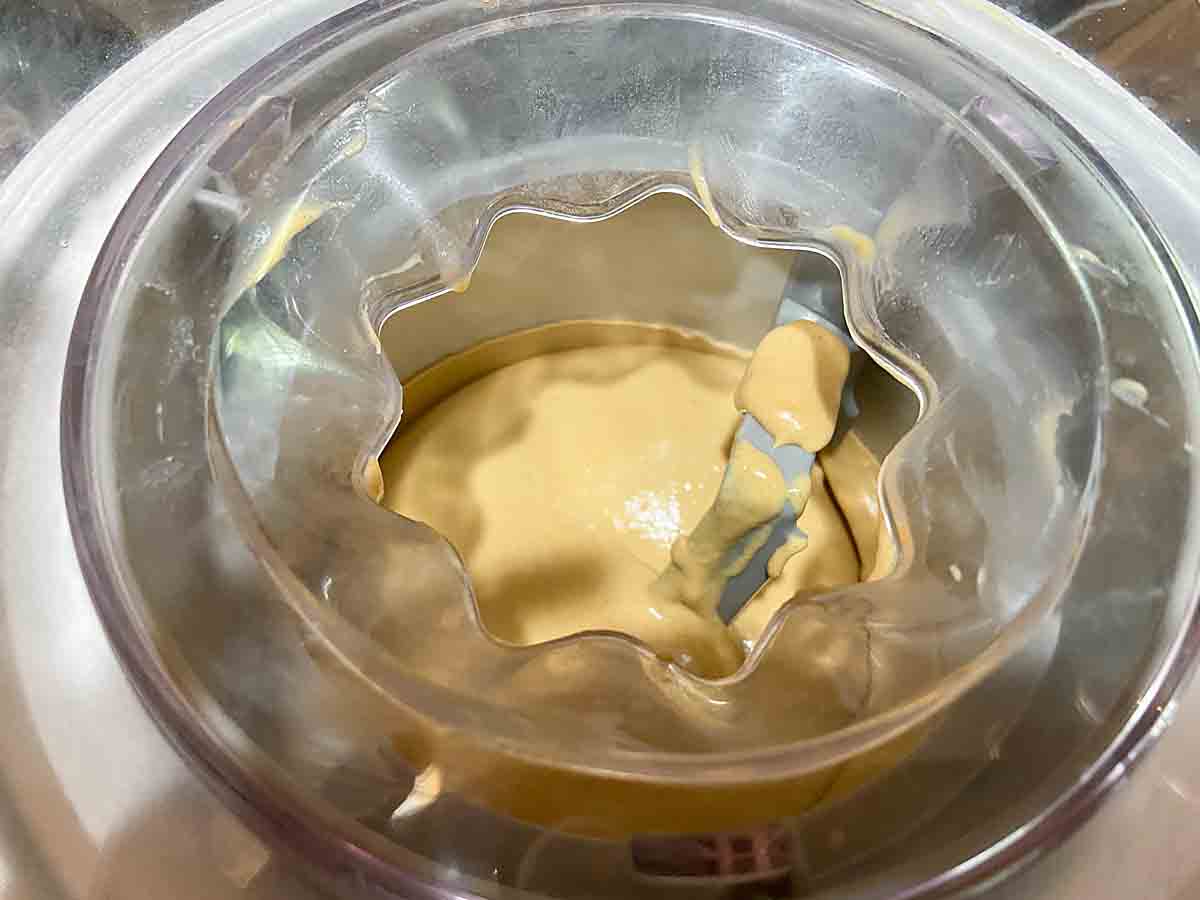 Use of Corn Syrup or Golden Syrup

I did make one change from the official Jeni method in that I allow the option to use golden syrup instead of corn syrup.

Golden syrup is what they usually use in Britain where US cooks use light corn syrup.  It is made from sugar rather than corn but is supposed to have the same beneficial properties in cooking and candy making—things like reducing crystallization.

I have made this recipe both ways and the final ice creamm was slightly harder with the golden syrup–though this could have been due to other factors.  I used different brands of both canned pumpkin and cream cheese so it wasn’t a controlled test.  But even slightly harder, it was deeliciious (I did leave it out briefly before eating) and I had no problems with ice crystals.

So if you are a GMO avoider, you can go with organic corn syrup (organic standards don’t permit the use of GMOs)–or give golden syrup a try.  I’ll be testing some of my candies with golden syrup this fall and updating the recipes so stay tuned! 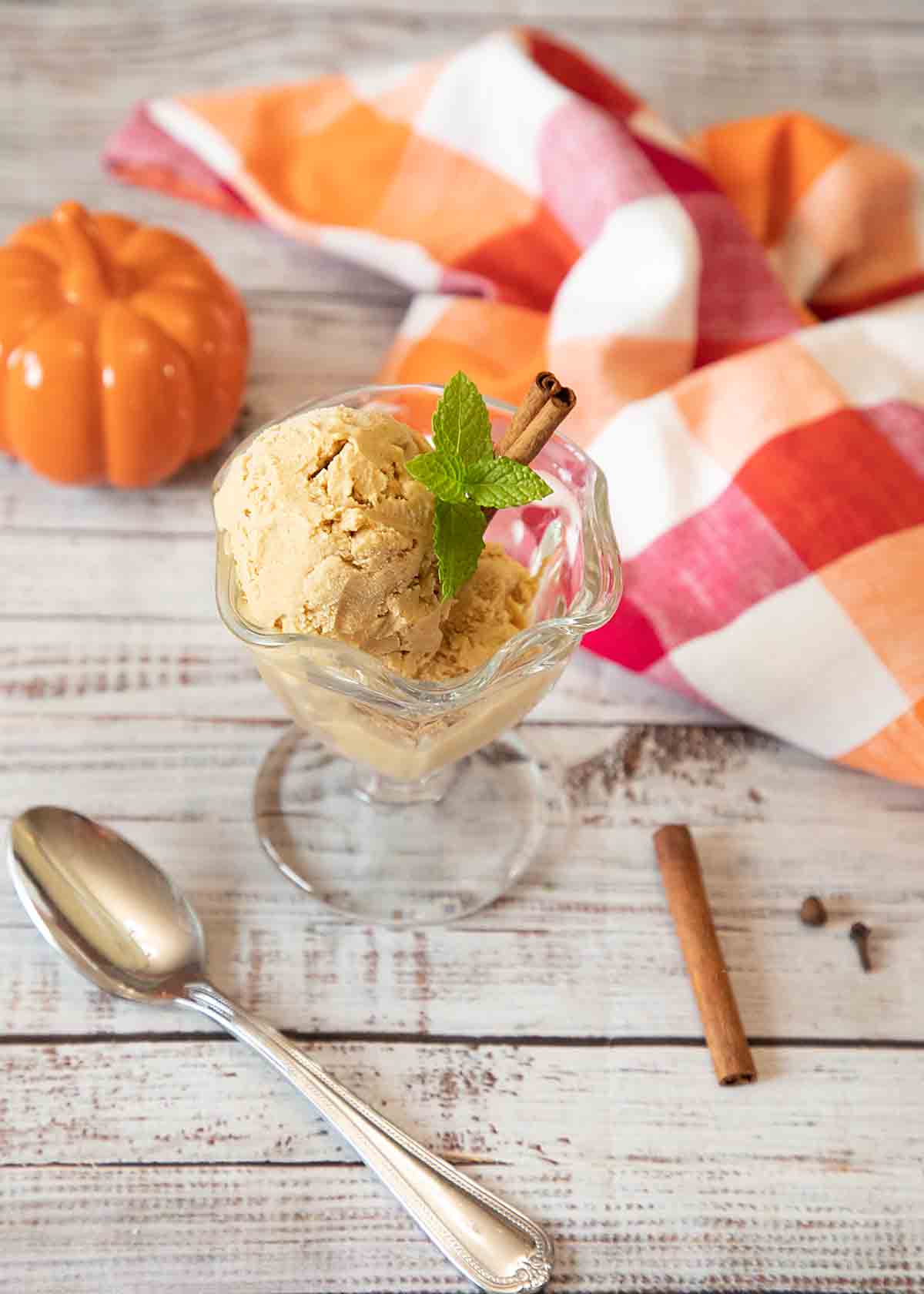 This ice cream makes a delicious dessert or snack.  And there are so many ways you can serve it!

The easiest is simply to scoop it into a parfait dish and enjoy.  Perhaps top with a sprig of mint.  Or some whipped cream and crushed nuts or graham crumbs.  Just. Plain. Yum.

Of course your kids will probably want this in a cone.  Can’t beat that either! 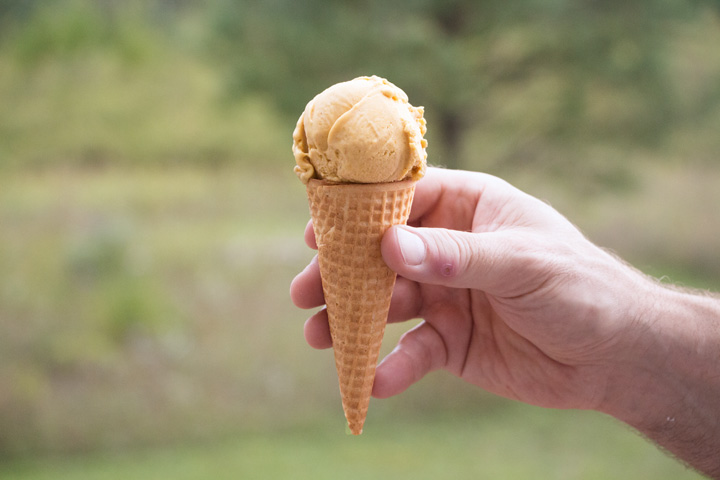 Now since we had just come back from England with some lovely (chocolate topped) digestive biscuits, it wasn’t long before I’d used those to make an ice cream sandwich. 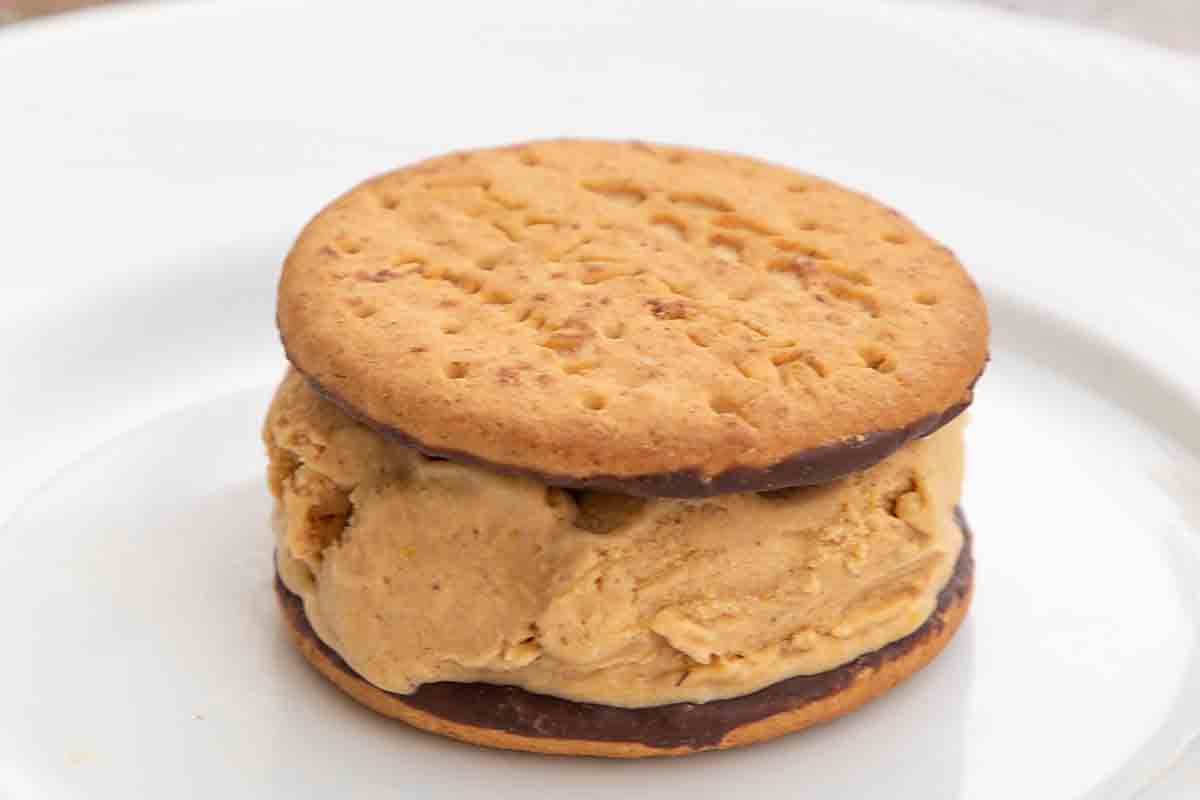 And finally, I think this would be lovely scooped into a graham cracker crust for an ice cream pie.  Take a look at my Coffee Fudge Ice Cream Pie for inspiration, though I’d probably just top the pumpkin ice cream pie with a little whipped cream.

If you’d really like to get serious about homemade ice cream, I’d recommend her book.  It’s filled with delicious recipes for ice cream, sorbet and frozen yogurt and more info on the theory than I give here.

Still on the fence?  Then perhaps take a look at my (yummy) experience with Jeni’s Dark Chocolate Ice Cream.

From a food safety perspective you should be able to keep this frozen for months, though at some point the quality will suffer.  I’ve keep it in the freezer up to a week without crystallization problems–then my willpower gave out!  I should note that if you do a lot of extended in and outs from the freezer, you will see ice crystals develop. 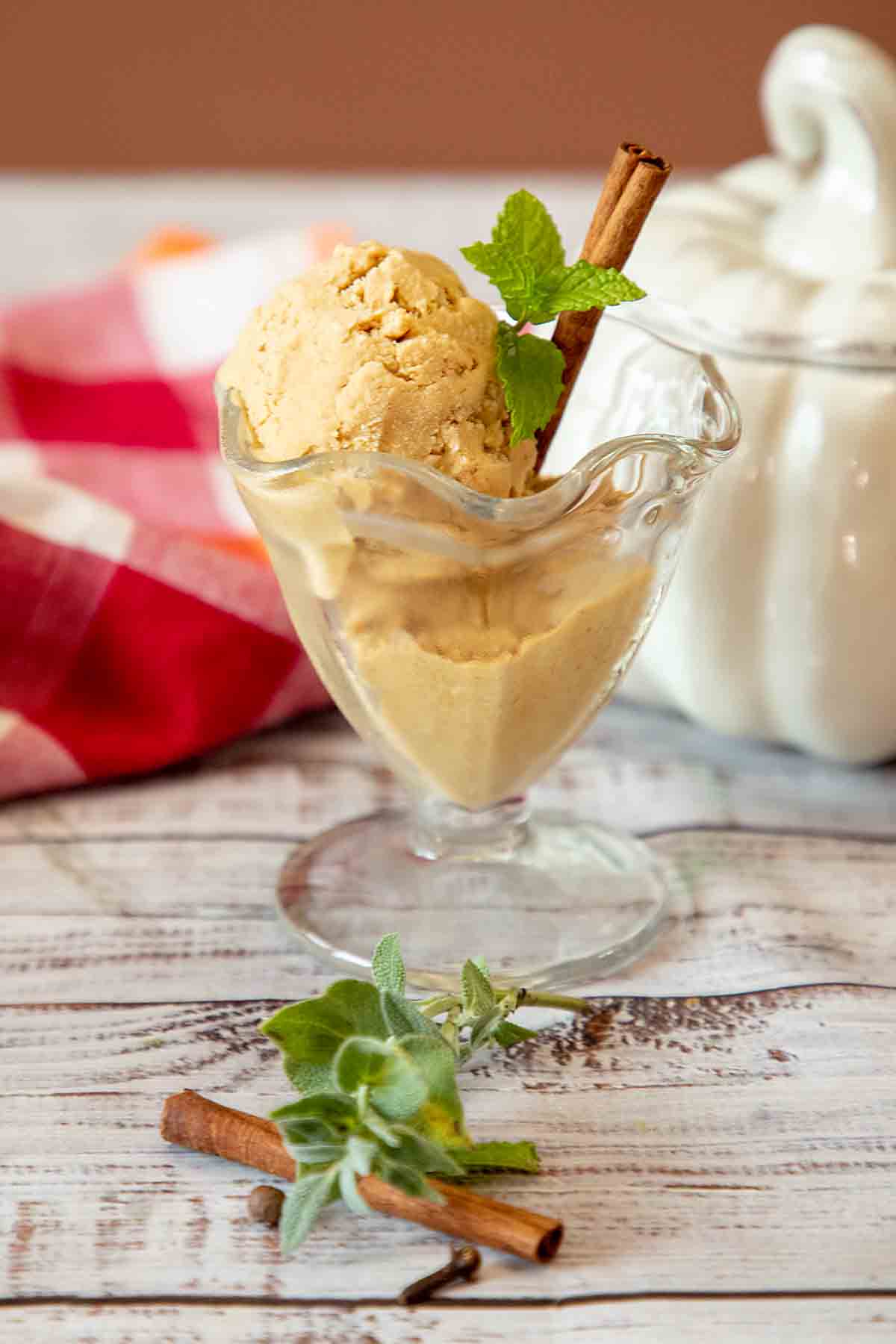 Can I use cooked fresh pumpkin?  Fresh pumpkin has a significantly higher water content, so I’ve been hesitant to try it.  Altering the water ratio is one of the things that can cause iciness in the final product.

If you do try it, be sure to drain the puree at least overnight before using and comment back to let me know how it goes. 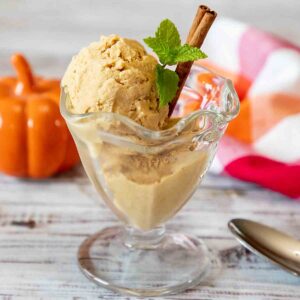 Creamy and flavorful, Pumpkin Ice Cream is a tasty fall dessert of snack with a little extra nutrition thrown in!
Print