Sometimes planets need to align for things to happen.  For example, I’ve been saying I’m going to make homemade mac n cheese for, um… about, 5 years?  I finally made it this week (the bacon and squash part was a new inspiration–see below.)! 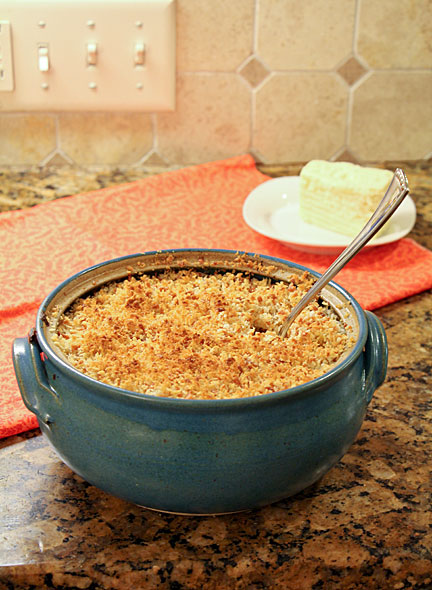 So what finally came together?  First, someone brought a version of this dish to the recent CSA Harvest Party we attended.  Gotta highlight those nice fall veggies at a harvest party!  I kept going back to for “one last taste.”  Up until the bowl was empty. 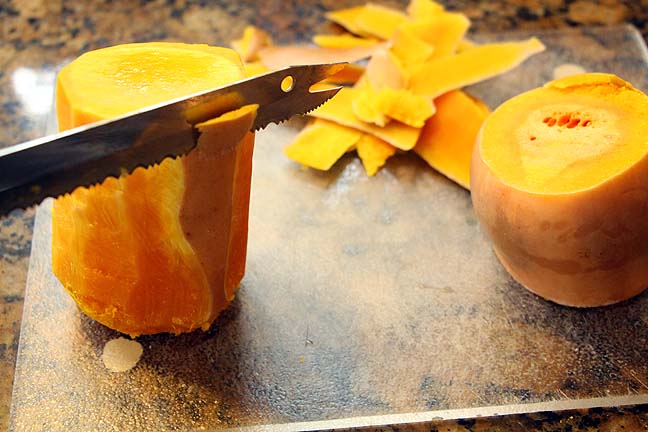 Second, there was the half pig (organic of course) that I just bought–endowed with abundant, naturally cured, smoked bacon.

Finally my blogging friend Louise, from Months of Edible Celebrations, is celebrating World Pasta Day.  I try never to miss one of her parties!

When searching the Internet for different versions of this recipe, I was shocked at how high in fat some were.  While this one is no low-cal special, it was reasonable and I was hoping it would still be flavorful. 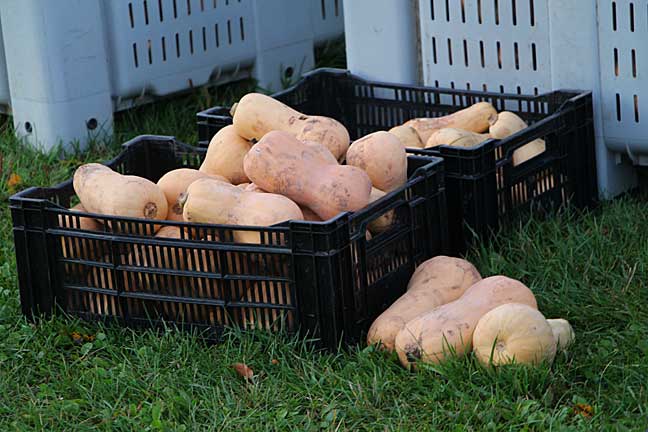 The dish was a big hit with my husband and my high schooler (who once she tasted it, shopped whining  that there was squash in it!) and the only complaint I had was that it was a bit dry. This was quickly remedied by plopping a pat of butter on each serving (which is really only 33 calories of extra fat) but I would want to play with the recipe before making it again.   I had (uncharacteristically) followed the directions (from BHG) quite closely so went back to look at the pictures and…  well, it looked dry to me in those too.  So next time, I will either increase the milk or reduce the amount of pasta from 12 to 10 ounces, which would still be plenty, since this made about eight servings.

Looking for a way to bring together good nutrition and comfort food?  This may be it! 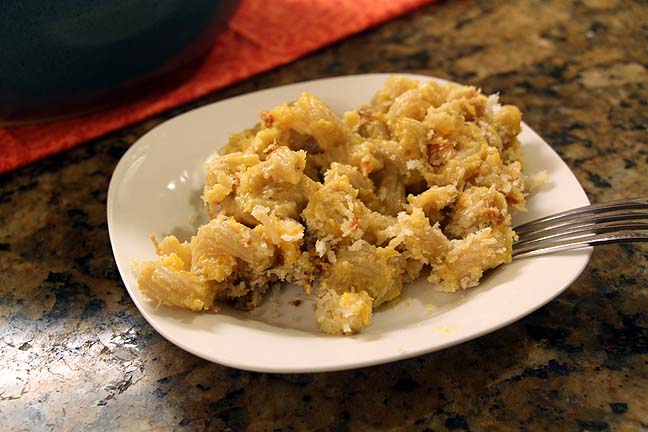 A plateful of mac n cheese

Directions
1. Preheat the oven to 400 degrees F. Butter or spray a 3-quart baking dish; set aside. Cook pasta according to package directions. Drain; transfer to a large bowl.
2. In a large saucepan combine the squash and 2 1/2 cups of the milk over medium-high heat. Bring to boiling; reduce heat to medium, and simmer until the squash is tender when pierced with a fork, 18 to 20 minutes. Stir together remaining 1/4 cup milk and flour; stir into squash mixture. Bring to boiling; cook until thickened, 2 to 3 minutes. Stir in 1 1/2 cups of the cheese until melted; keep warm. 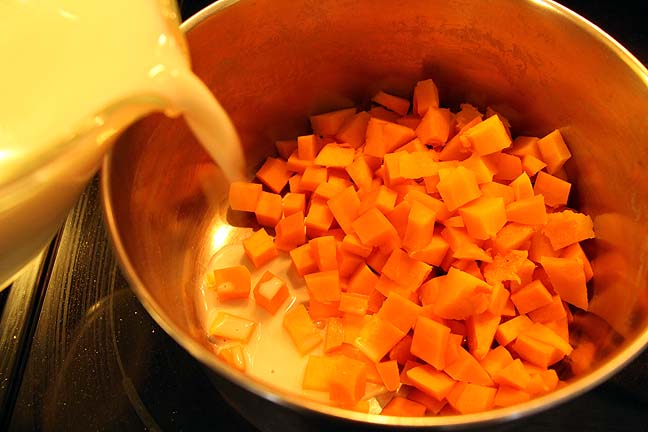 3. In a large skillet cook bacon until crisp; drain on paper towels. Crumble; set aside. Pour off all but 1 tablespoons bacon drippings. Add onions to skillet, cover, and cook until onions are soft.  Deglaze pan with a bit of water to get off cooked bacon bits and continue cooking until onions are golden. 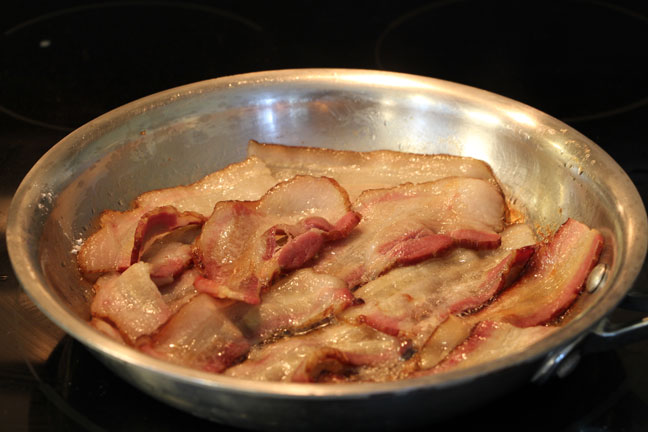 4. Add squash-cheese mixture, onions, and crumbled bacon to the bowl with the pasta. Toss well to combine, then transfer to prepared baking dish. 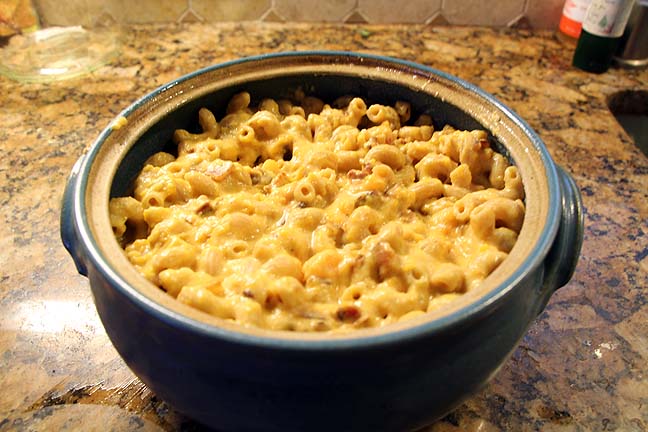 5. Mix breadcrumbs with melted butter. Sprinkle remaining cheese and the bread crumbs over pasta mixture. over. 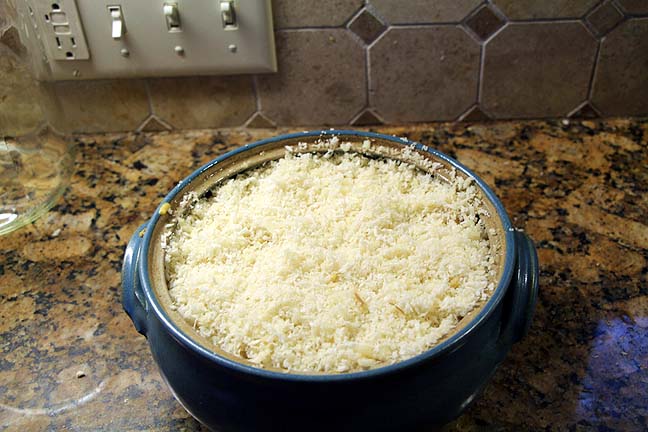 Top with breadcrumbs and cheese 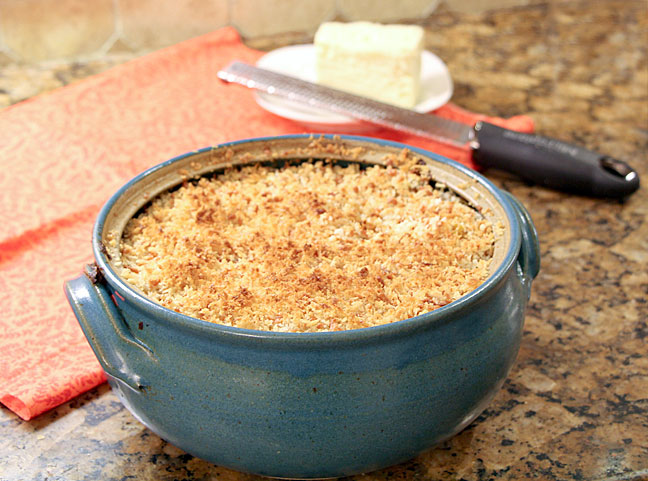 Tips: Be sure to use a flavorful cheese–Better Homes and Gardens recommended smoked Gruyere.

If you microwave the squash before cubing, it will be softer and easier to cut.

This would probably work well as a make-ahead dish.  In that case, begin re-heating, covered, at 350 degrees, then uncover and increase temperature to brown topping when pasta is warm.