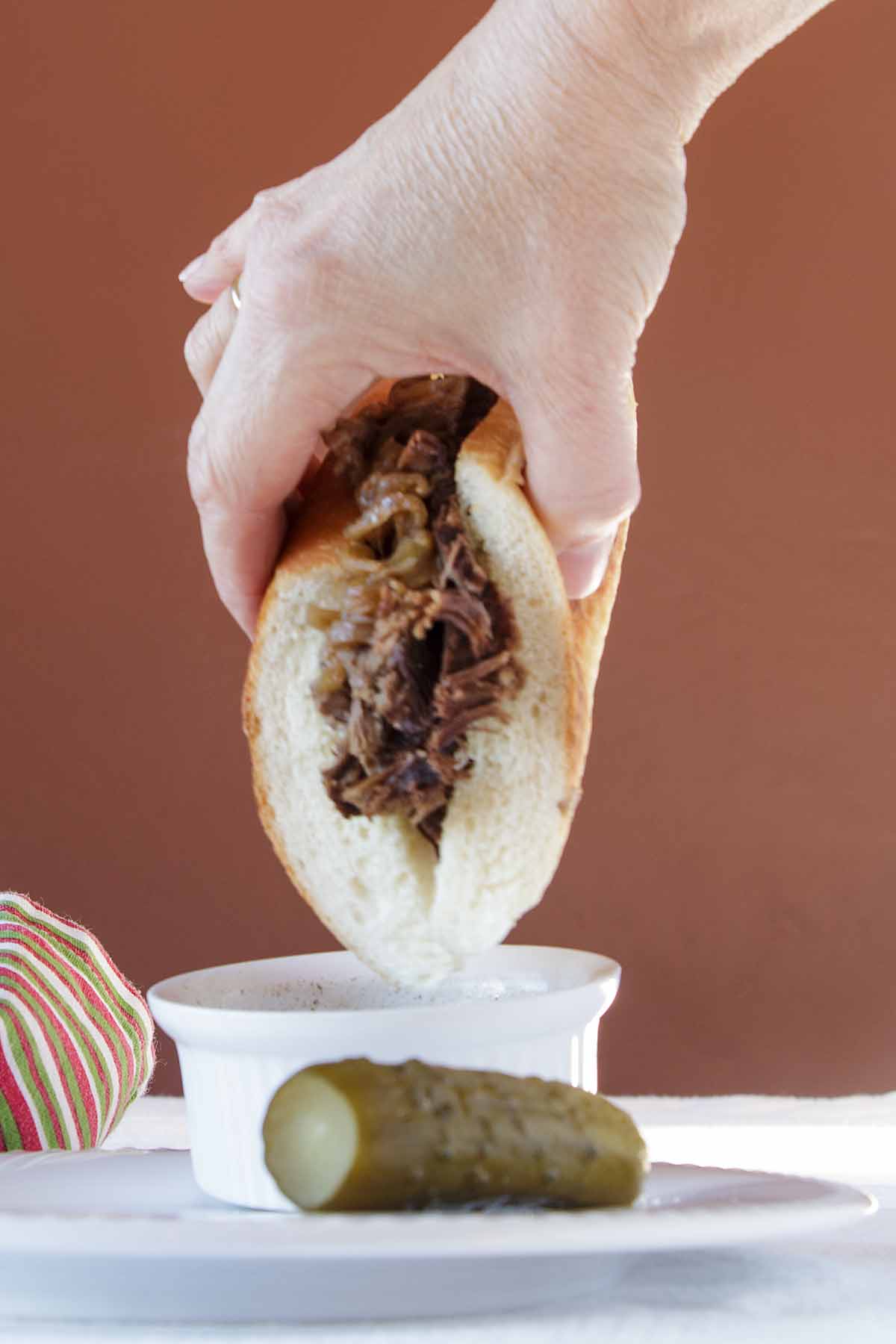 Is there any sandwich quite like a French Dip au Jus?

Now sometimes sandwiches get their fame from loading up on toppings, like these loaded chicken burgers.  But a French Dip Sandwich is more like simple perfection–on a roll!

And it’s a sandwich that crosses the generation gap. Adults will love the flavor and kids will think that dipping is the most fun ever!

What is a French Dip?

Per Wikipedia, a French dip sandwich “is a hot sandwich consisting of thinly sliced roast beef (or, sometimes, other meats) on a “French roll” or baguette. It is usually served plain but a variation is to top with Swiss cheese, onions, and a dipping container of beef broth produced from the cooking process.”

And despite its French-sounding name, this sandwich is all American! 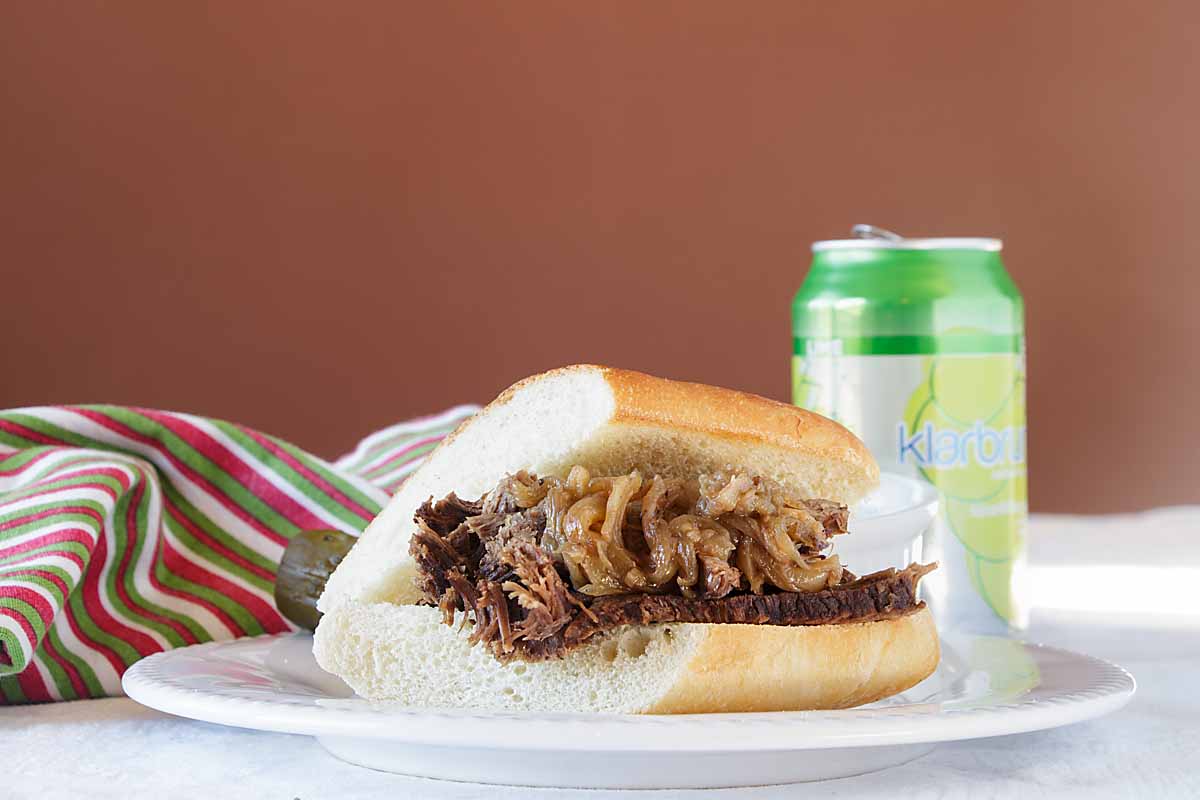 Novel & Tasty. Dipping a crusty sandwich in flavorful “jus” is delicious and fun! Who cares if a little runs down your arm!
Healthier. If you make it yourself you can skip the processed deli meat. You can even use organic grass-fed beef!
Easy. This is made in a crock pot or a Dutch oven with an extended cooking time to make the meat meltingly tender. But there is very little working time. 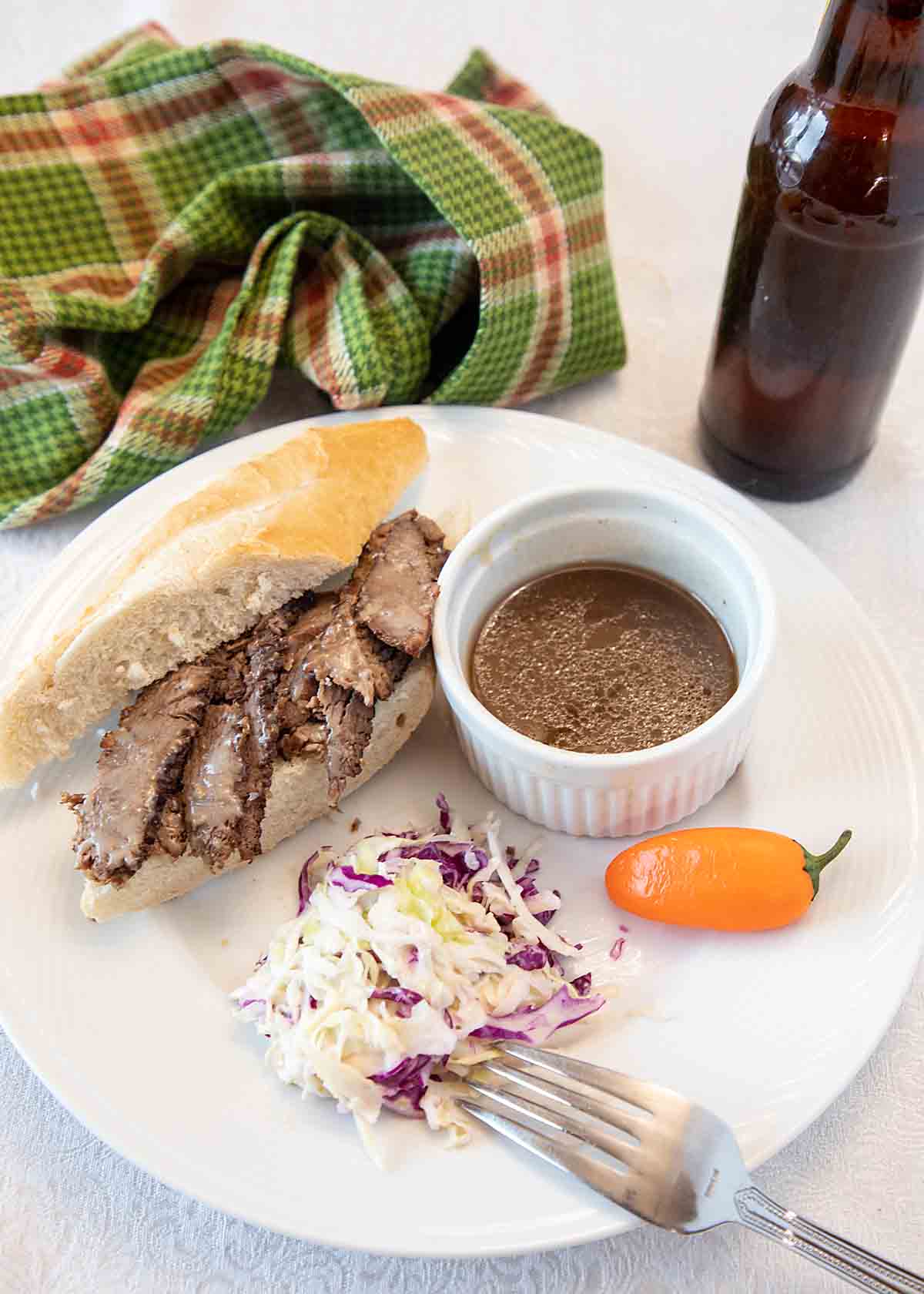 Sear the meat on each side until brown and crusty. Transfer meat to a plate. 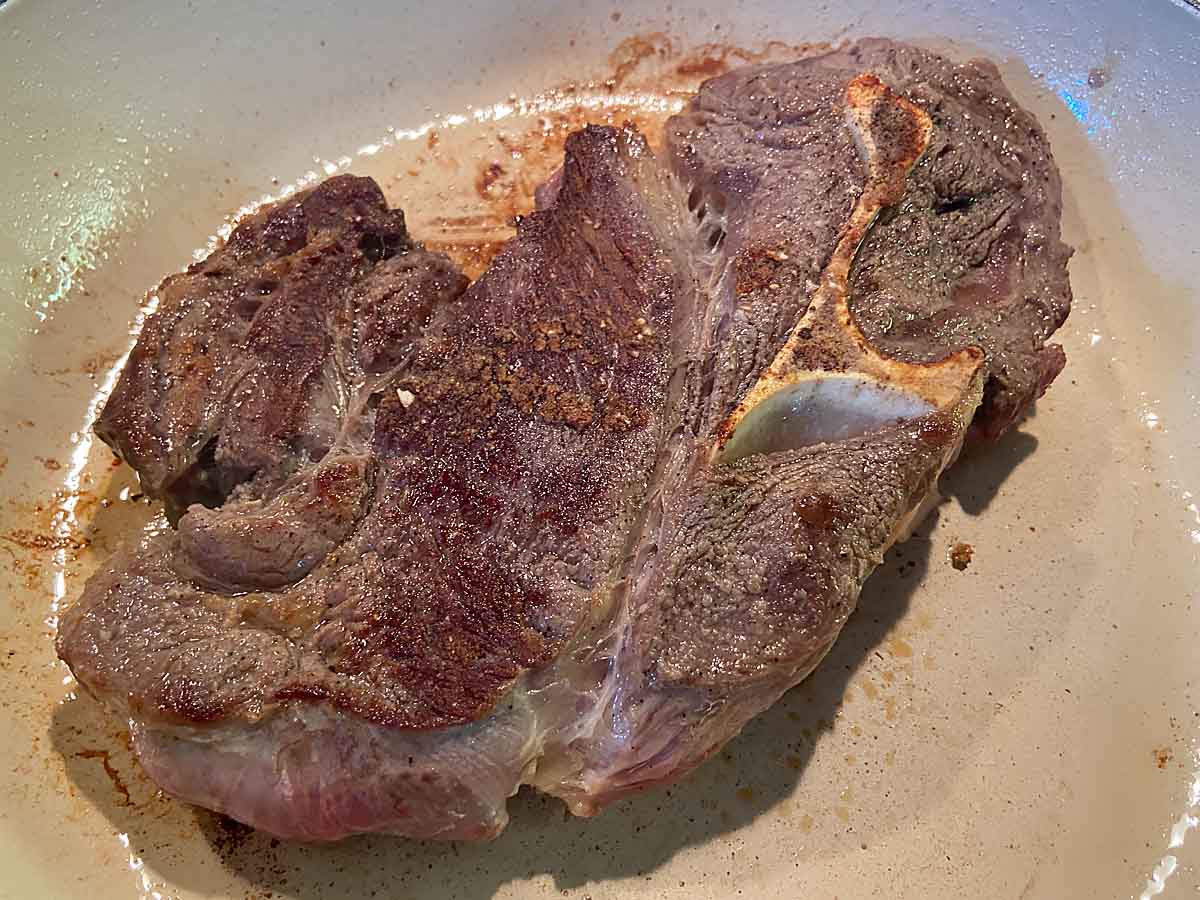 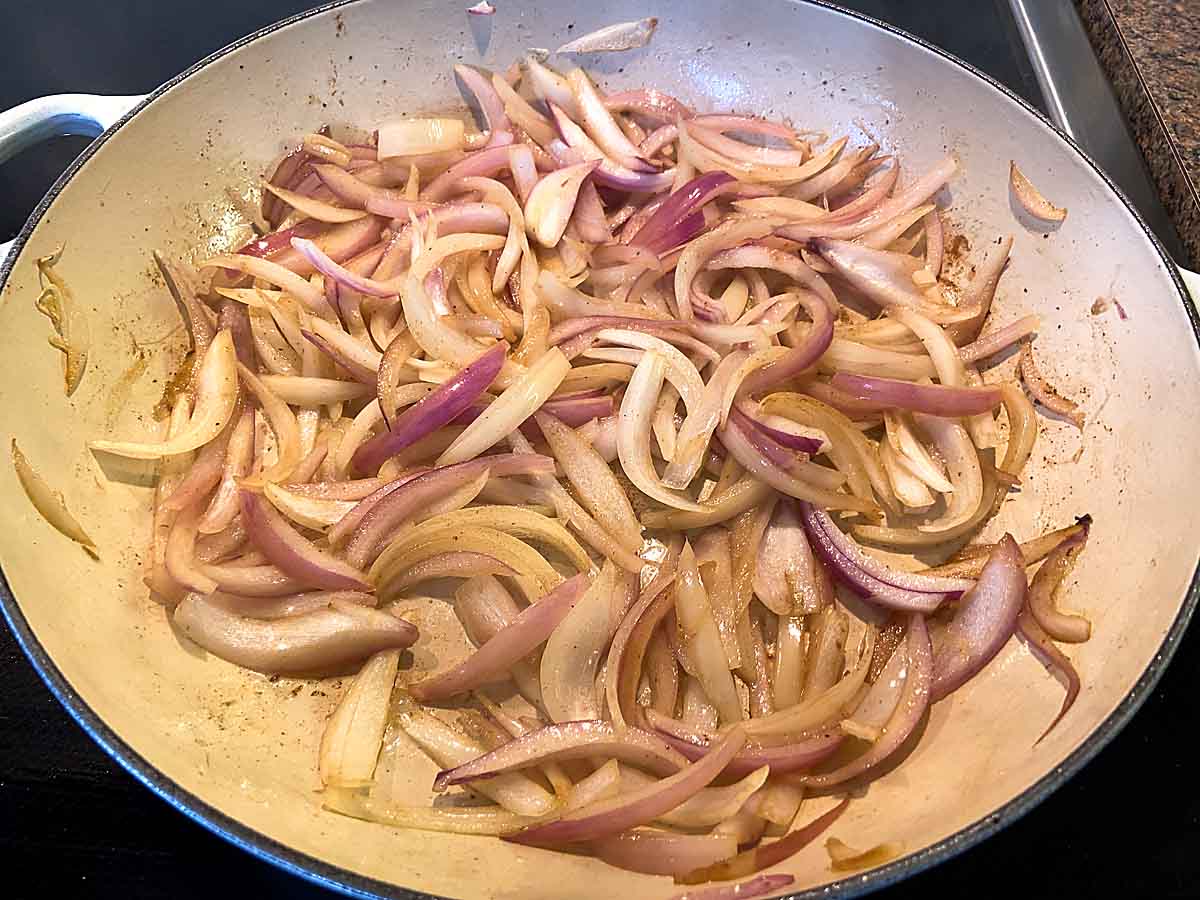 Add the chopped garlic and cook for an additional minute. Deglaze the pan with a few tablespoons of beef broth and scrape up most of the browned bits. Put the onions and meat into the slow cooker or Dutch Oven.  Add the remaining broth, Worcestershire sauce and bay leaf. 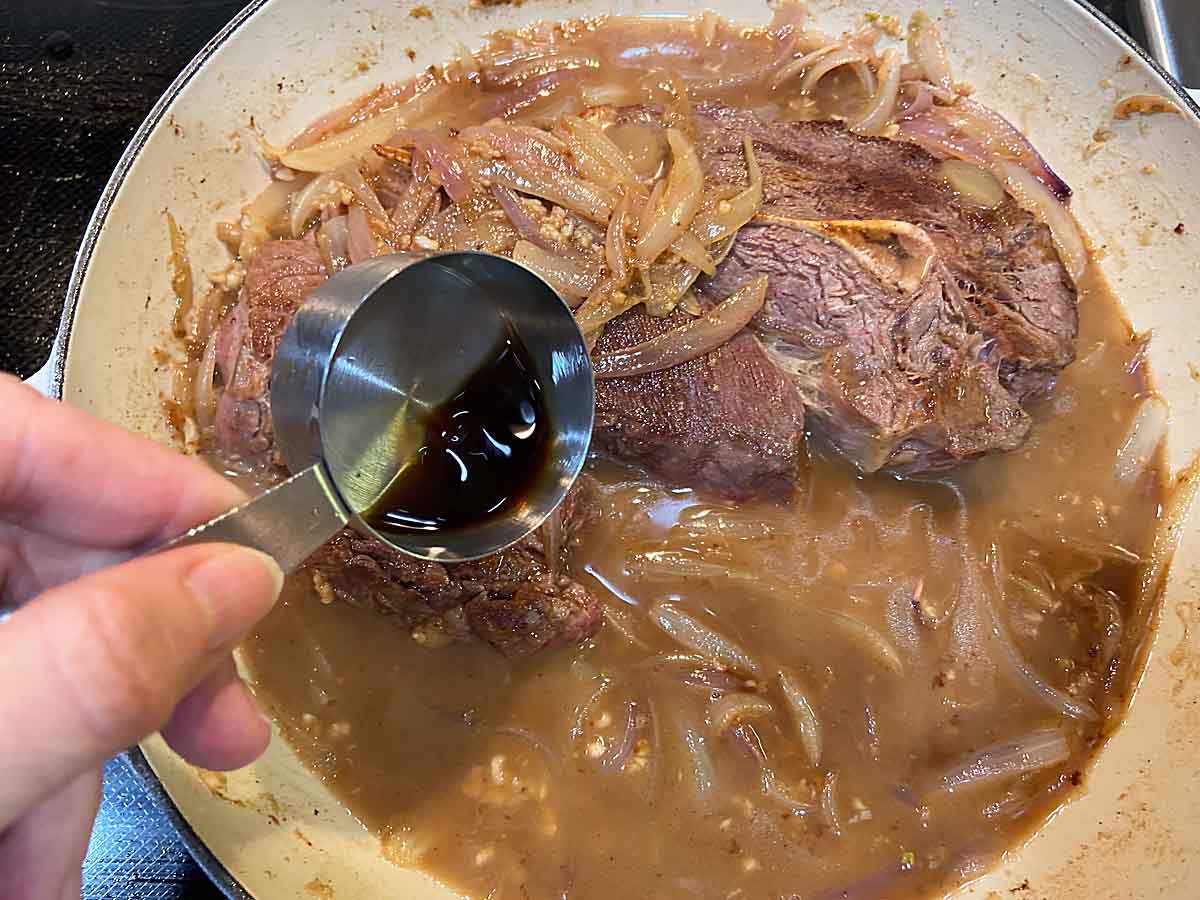 Cook in the slow cooker on high for 3-4 hours or low for 5-6 hours, until the meat is tender. Foor a Dutch Oven French Dip, cover and bake at 300F for 2-3 hours, until tender.  Remove the meat to a cutting board, then slice off any remaining fat. Thinly slice the meat and set aside, keeping warm. 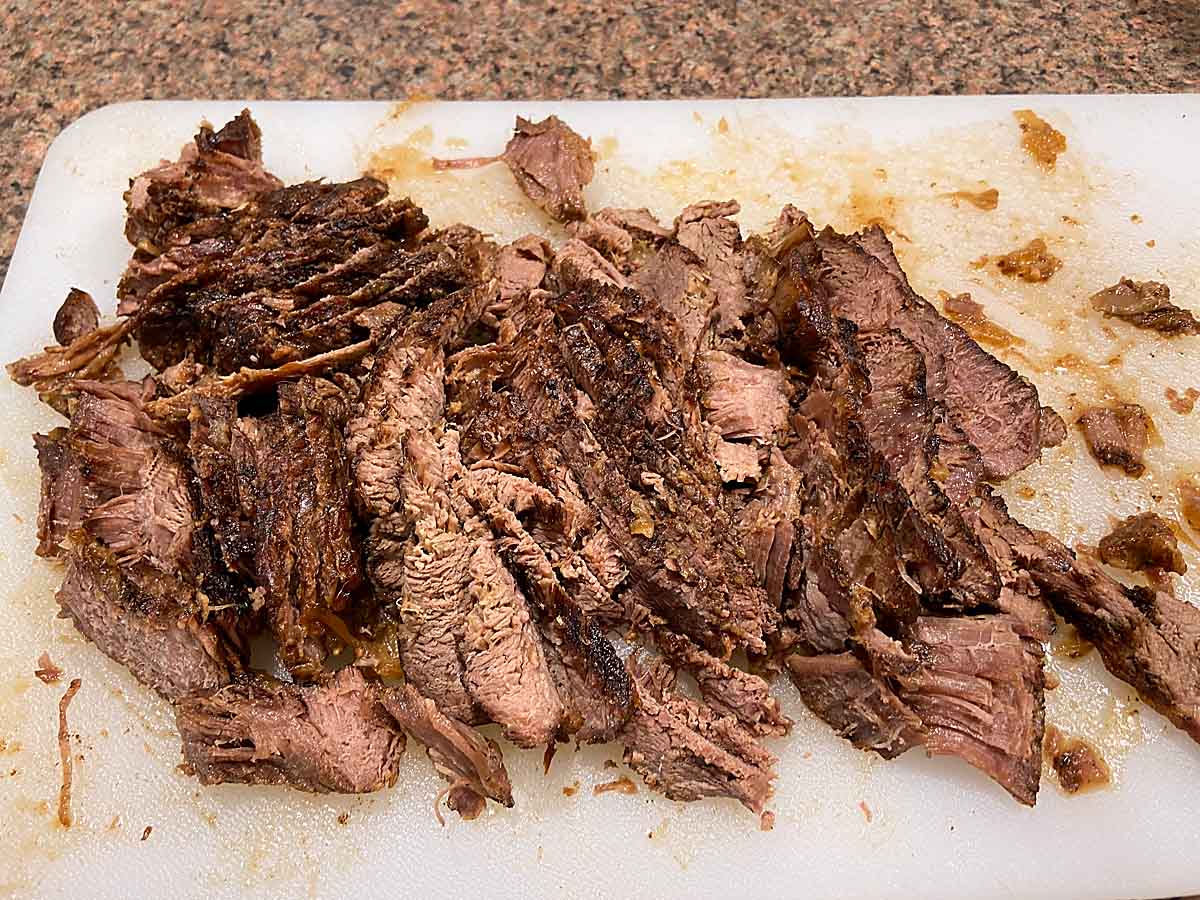 Strain the juices from the slow cooker and reserve–this is your jus. Separate and set aside the onions that remain in the strainer. Discard the bay leaf, bones, and roast scraps. 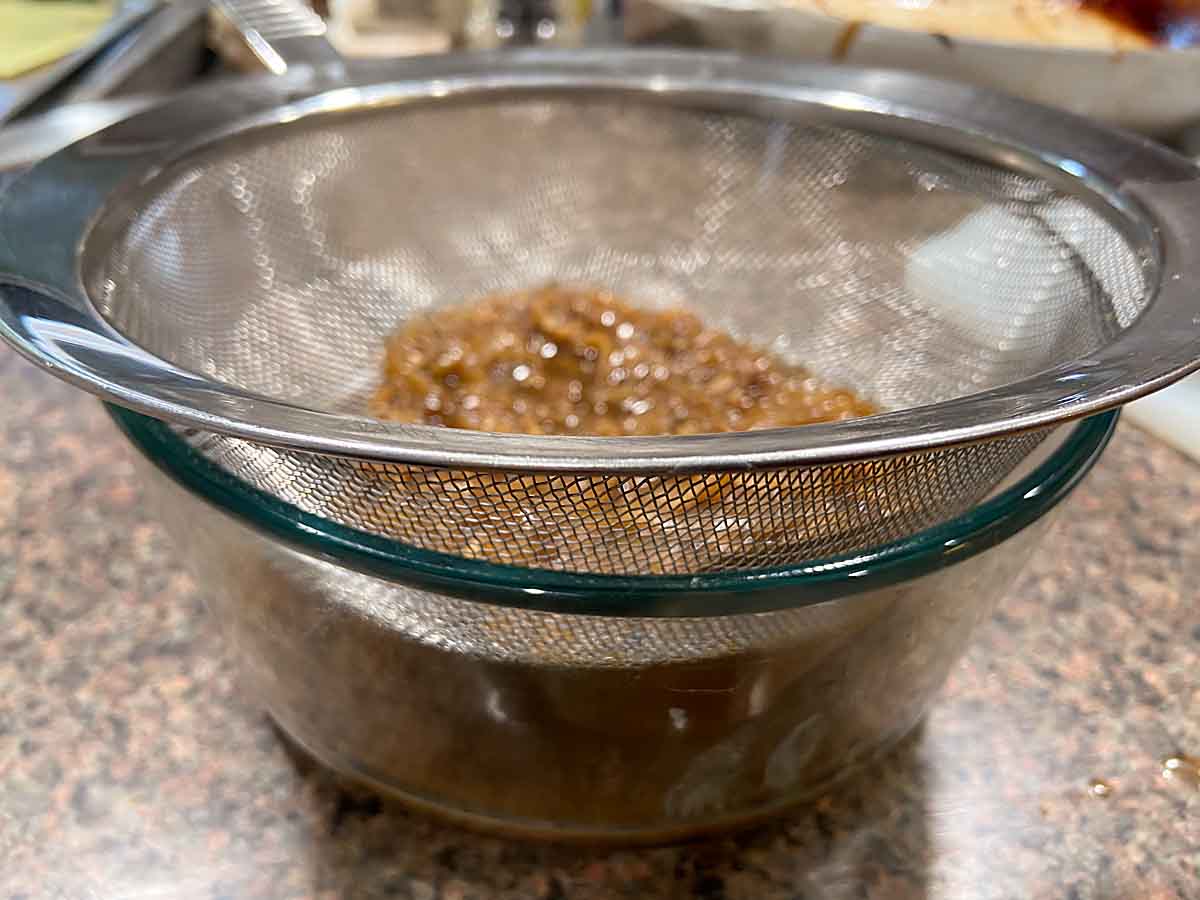 Slice French bread on a diagonal into sandwich-sized sections, then cut into top and bottom pieces. Toast if desired.  Pile meat and onions onto bottom slice, and replace bread top. For each sandwich, place 1/4 – 1/3 cup of “jus” in ramekin and serve on the side for dipping. 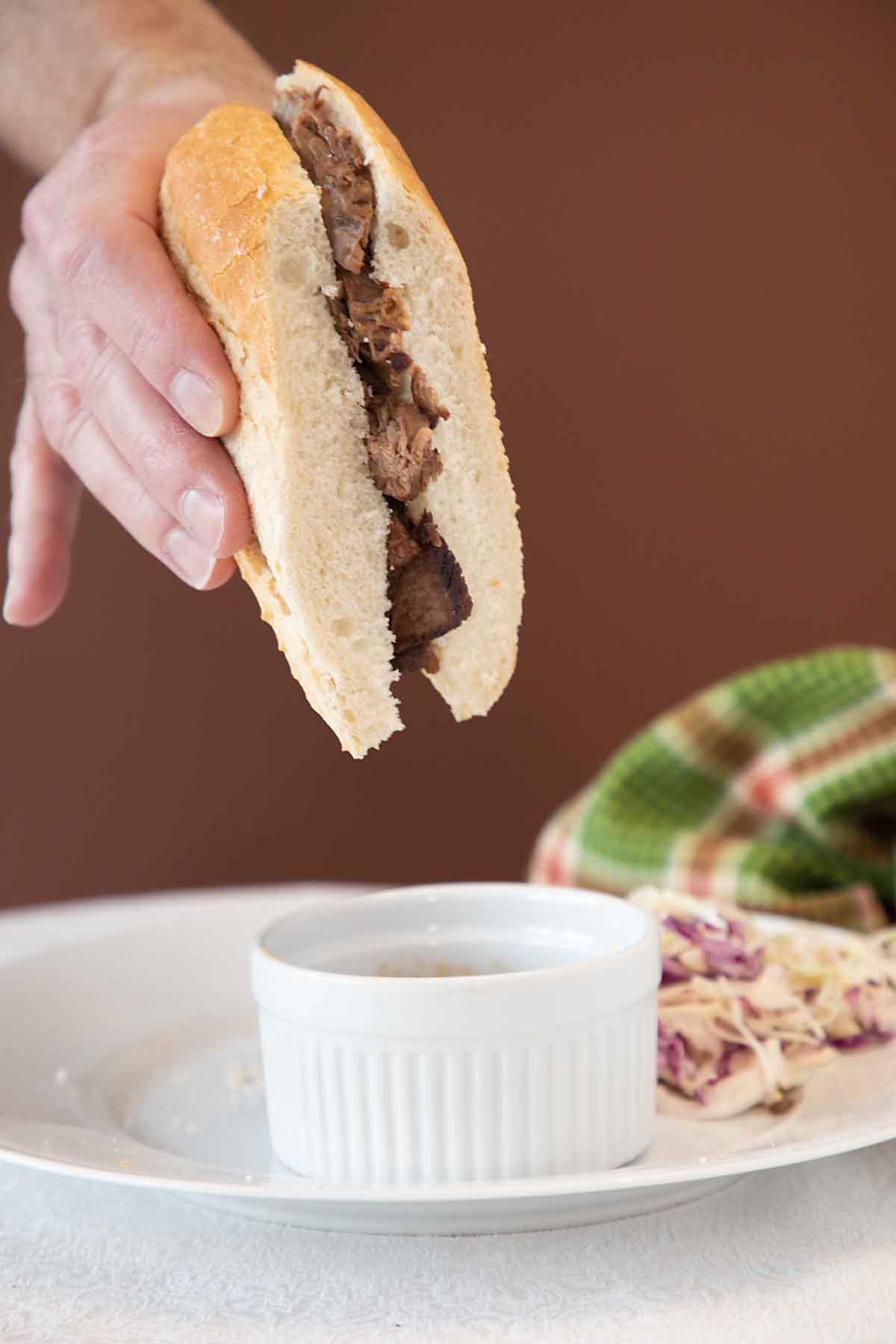 What meat can I use?

An Alternative to Deli Meat

Some people like to use deli meat for their French Dip Sandwiches. But according to Better by NBC Today “Processed meat is a meat that has been treated in some way to preserve or flavor it through salting, curing, fermenting, and smoking… And that includes deli meat — whether red (like roast beef or ham) or white (like turkey or chicken).”

Of course we’ve all heard the advice to limit or avoid processed meats! And while making a Homemade French Dip takes cooking time, there is probably less working time than a trip to the store!

In a perfect world, I’d make this dish with a rump roast. But every year when I buy my beef quarter, it seems to include… like 17 chuck roasts. And these work great too. 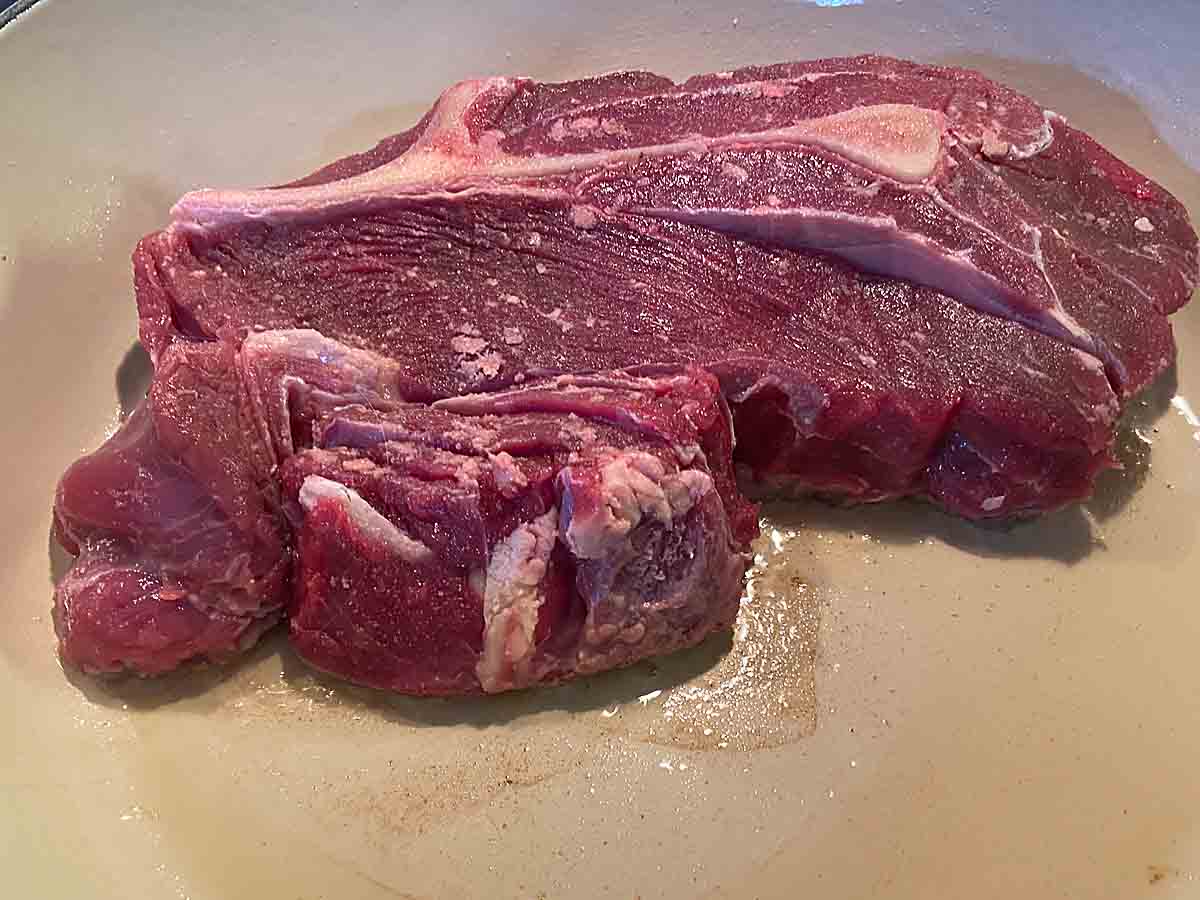 I do have a few tips for working with a chuck roast. First, you’ll want to pick the least fatty chuck roast you can find. Then trim off the exterior fat before cooking. This will make the dish leaner, and make your final slicing easier.

You will sometimes see people making French Dip sandwiches with steak. Personally I prefer to use a less expensive cut of meat for this. But if you decide to go with steak, grill it to medium, rather than slow cook it!

A French Dip Sandwich is perfect for lunch or a casual dinner. Given the fun nature of the meal, I prefer raw veggies or informal salads as sides. Consider Coleslaw, Broccoli Waldorf Salad or Classic Carrot Raisin Salad. 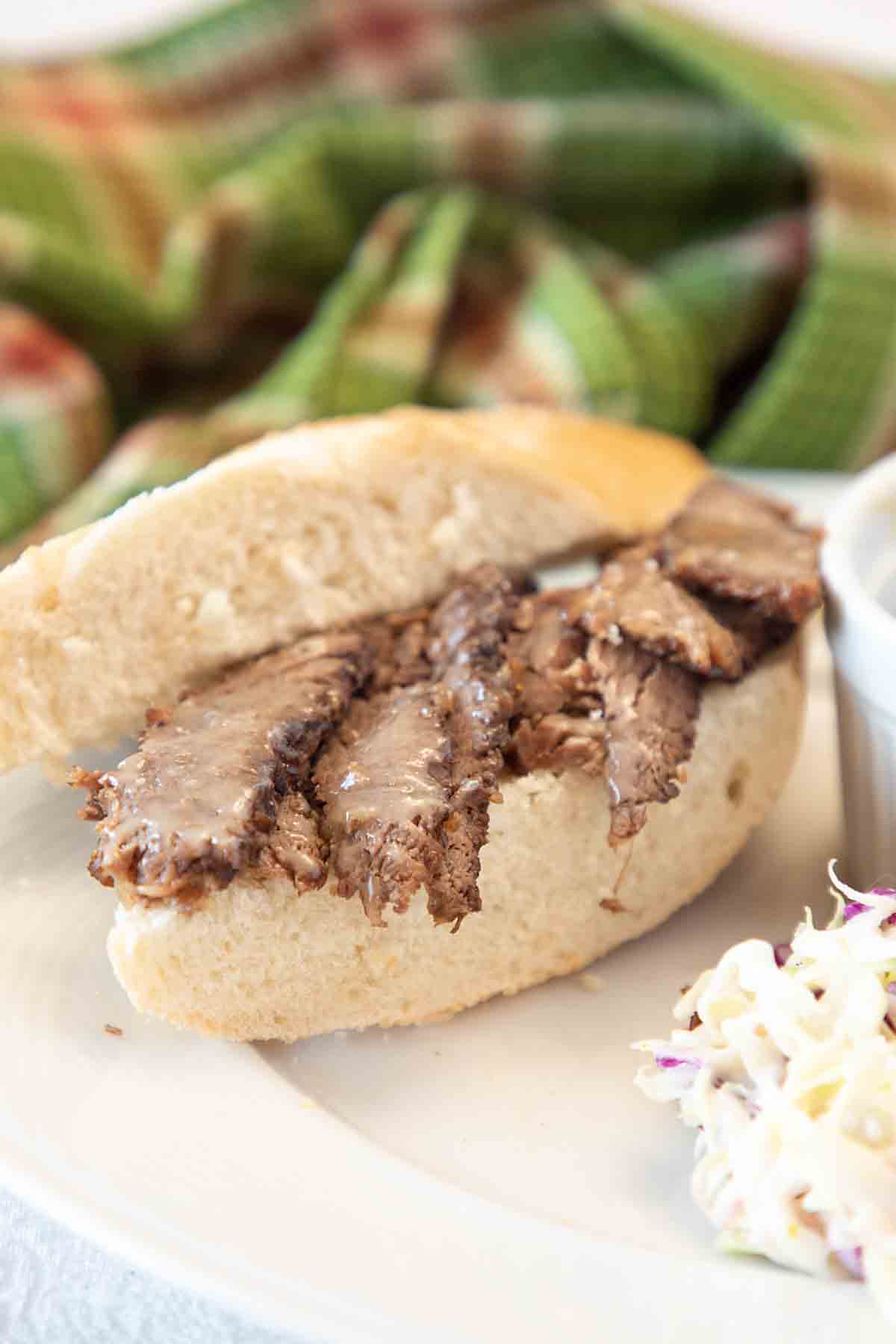 Some people like their French Dip au Jus with cheese. If you want to try this, top the meat with a good melting cheese like Swiss or provolone that has been sliced or grated. Then place it under the broiler to melt.

Use or omit the sauteed onions, per your preference. In creating the “jus”, onions are sautéed which really enhances the flavor. When it’s time to serve the sandwiches, you can top with some of the onions–or not. I’m an onion adder while my husband’s a hard no. You do you!

You can even make a French Dip with other meats like pork, chicken or turkey! 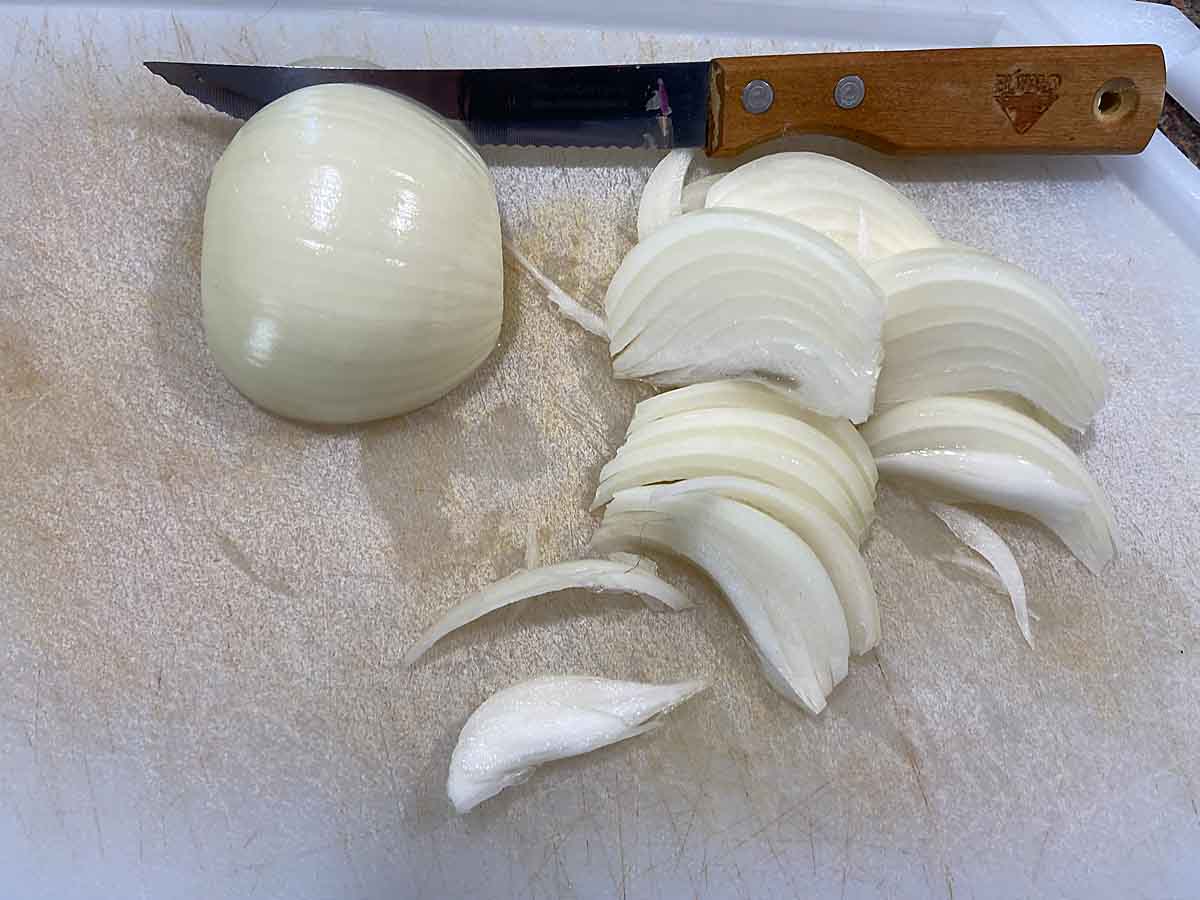 After cooking, the meat and “jus” should last 3-4 days, covered tightly in the refrigerator. This means my Slow Cooker French Dip is a fine make-ahead dish. And if you have lots of leftovers, both the meat and “jus” can be frozen.

While the meat always disappears when I make this, I usually have leftover “jus.” This can be used in place of beef broth in recipes like these Beef Tips, where it will deliver a rich punch of flavor! Or I add it to my stock when I make beef broth. Just freeze it until you are ready to use it. 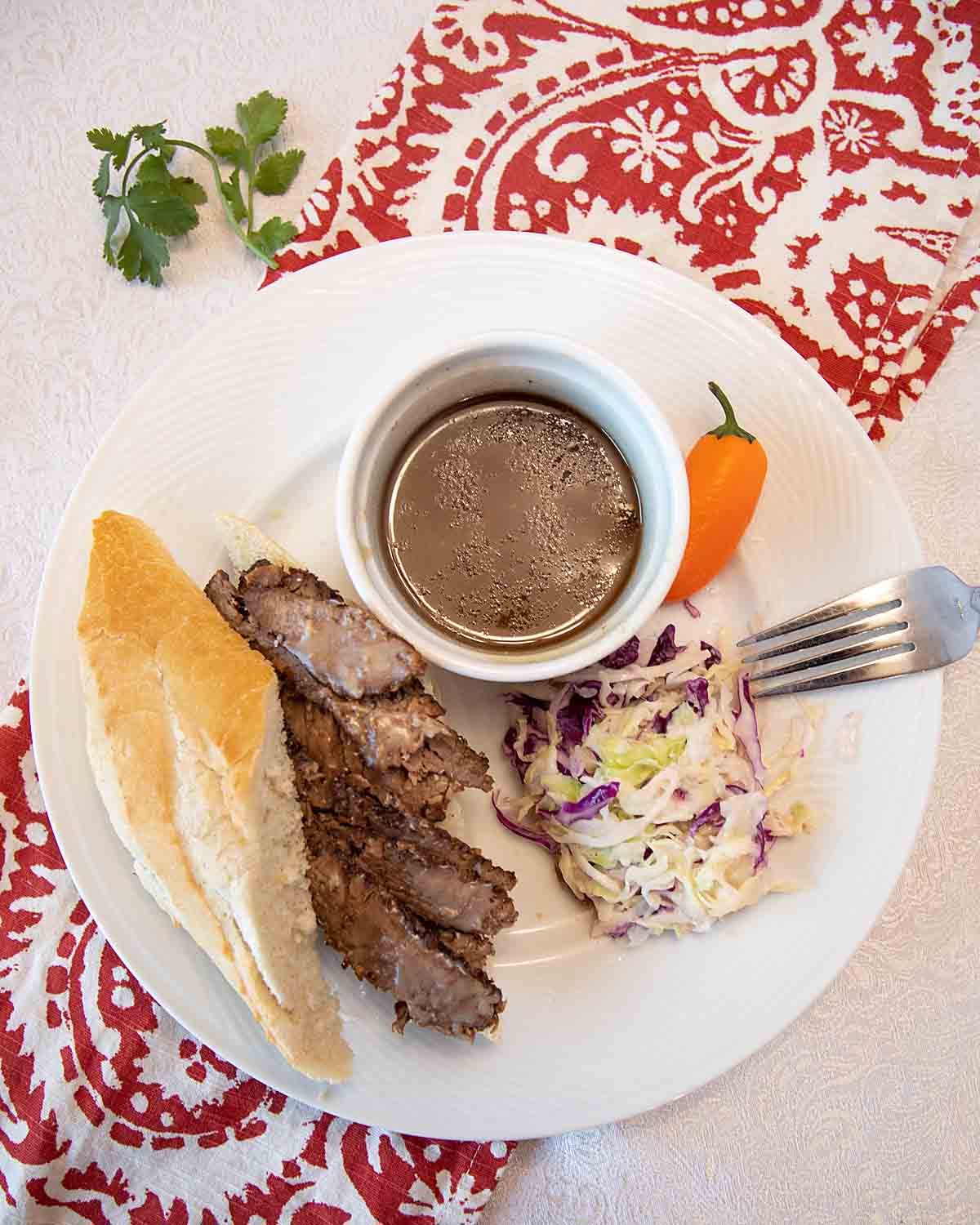 Don’t skip the initial browning of the meat. Browning gives you the Maillard reaction that amps up your flavor.

Beat the heat! On a very hot summer day, I have been know to put my slow cooker outside for the duration of the slow cooking part of the recipe. It’s kind of like an improvised summer kitchen!

The best bread for French Dip is something that is crusty, chewy and narrow enough to dip into the container holding your “jus.” Since I often use a small ramekin for dipping, French bread is perfect! I usually cut it at an angle for visual appeal and easy dipping. But anything robust enough to hold up to the dipping (firm hoagie roll?) should work. 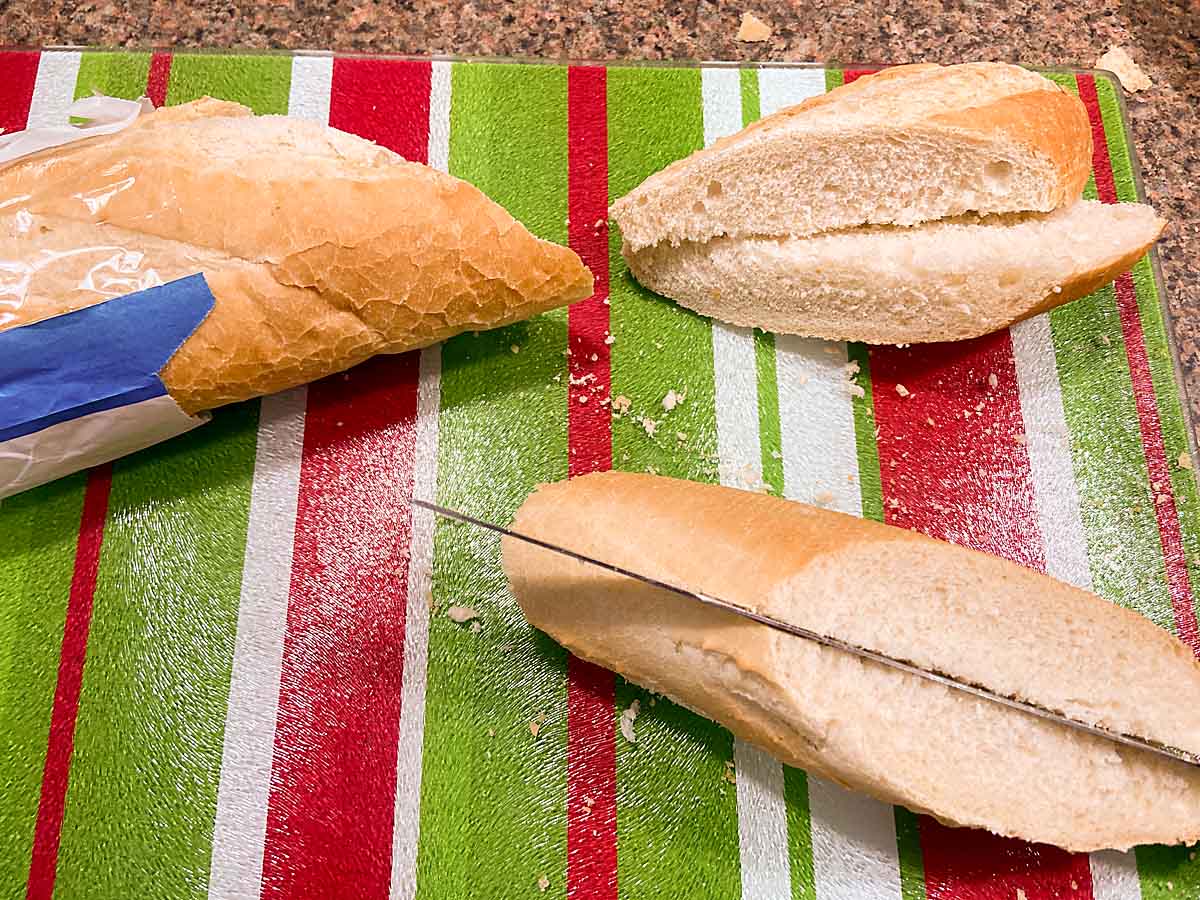 I had quite a bit of "jus" left after serving this. This went into the freezer for a later soup or stew.