A sweet, spicy and warming seasonal beverage, there is nothing like Hot Spiced Apple Cider to celebrate cooler weather! 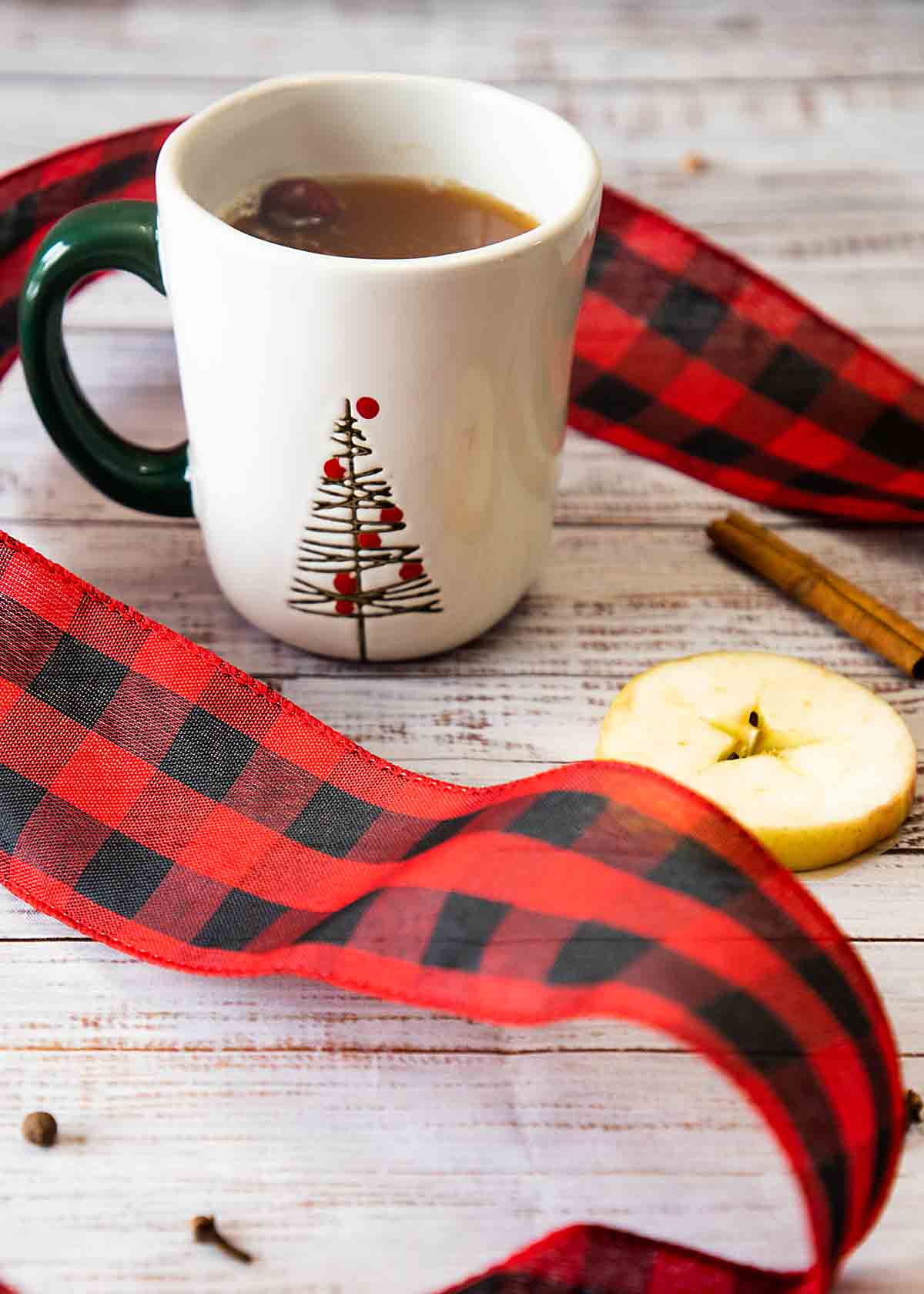 Spiced apple cider is almost synonymous with fall. But it can move seamlessly into winter as well. So when my blogging group decided to cover Mocktails, I knew it was time to update my 2011 post.

My earliest memories of Hot Spiced Cider date back to my teens–attending an outdoor fall festival. Watching my breath smoke in the chill air, I silently thanked my mother for mandating gloves. All while sipping a beverage that warmed me inside and out.

It was a moment where cold could be… perfection! 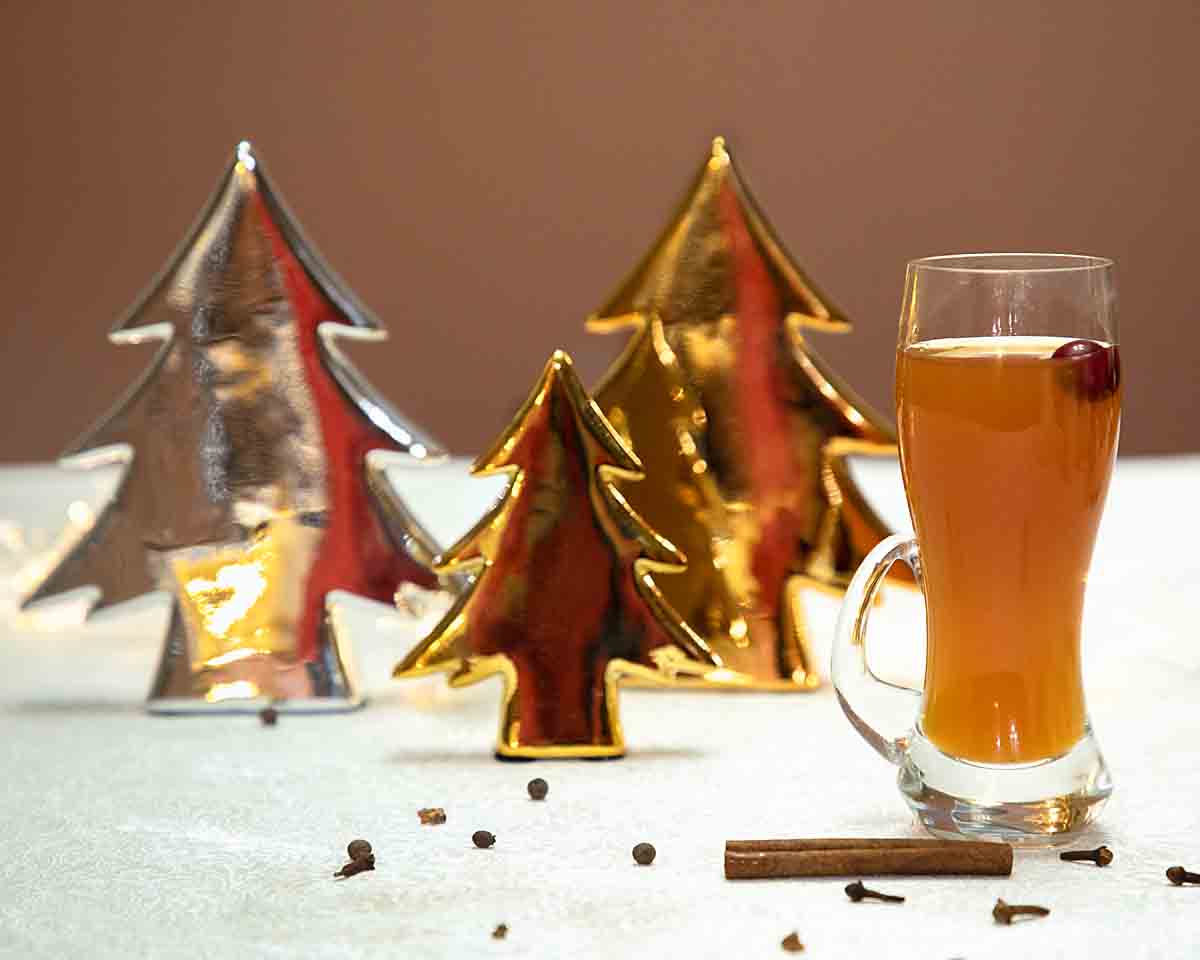 What is Mulled Apple Cider

Spiced apple cider is known by many names such as hot mulled cider, mulled apple cider, etc. and is made by heating cider with mulling spices like cinnamon, cloves and allspice.

Per Wikipedia, mulling spices “are usually used to spice hot apple cider, mulled wine, glögg, wassail, hippocras and other drinks (such as juices) during autumn or winter. A “mulled” drink is a drink which has been prepared with these spices (usually through heating the drink in a pot with mulling spices and then straining).”

Bottom line? It’s a warming and tasty beverage that’s perfect whenever there’s a chill in the air! 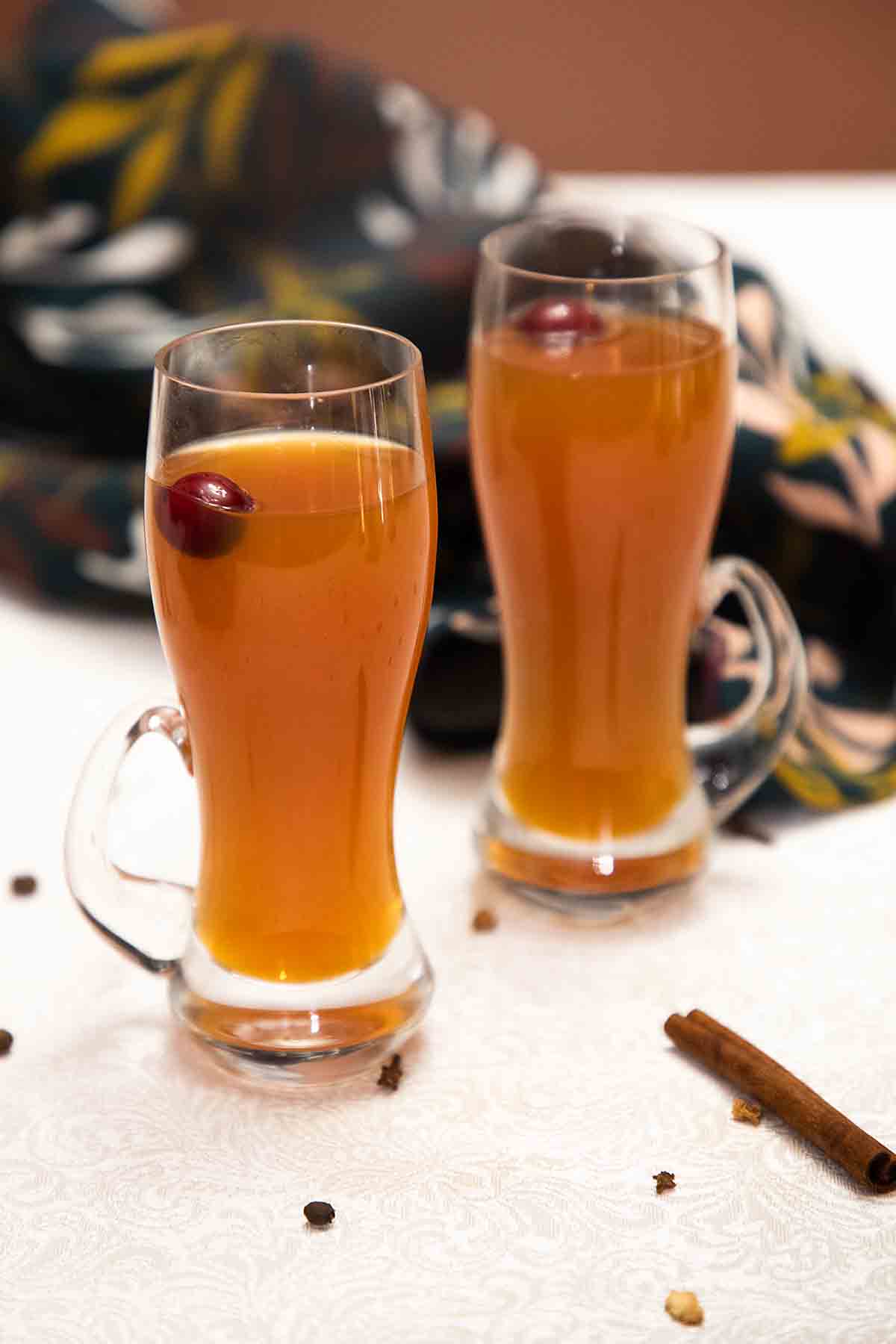 This drink has been a favorite for so long because it’s: 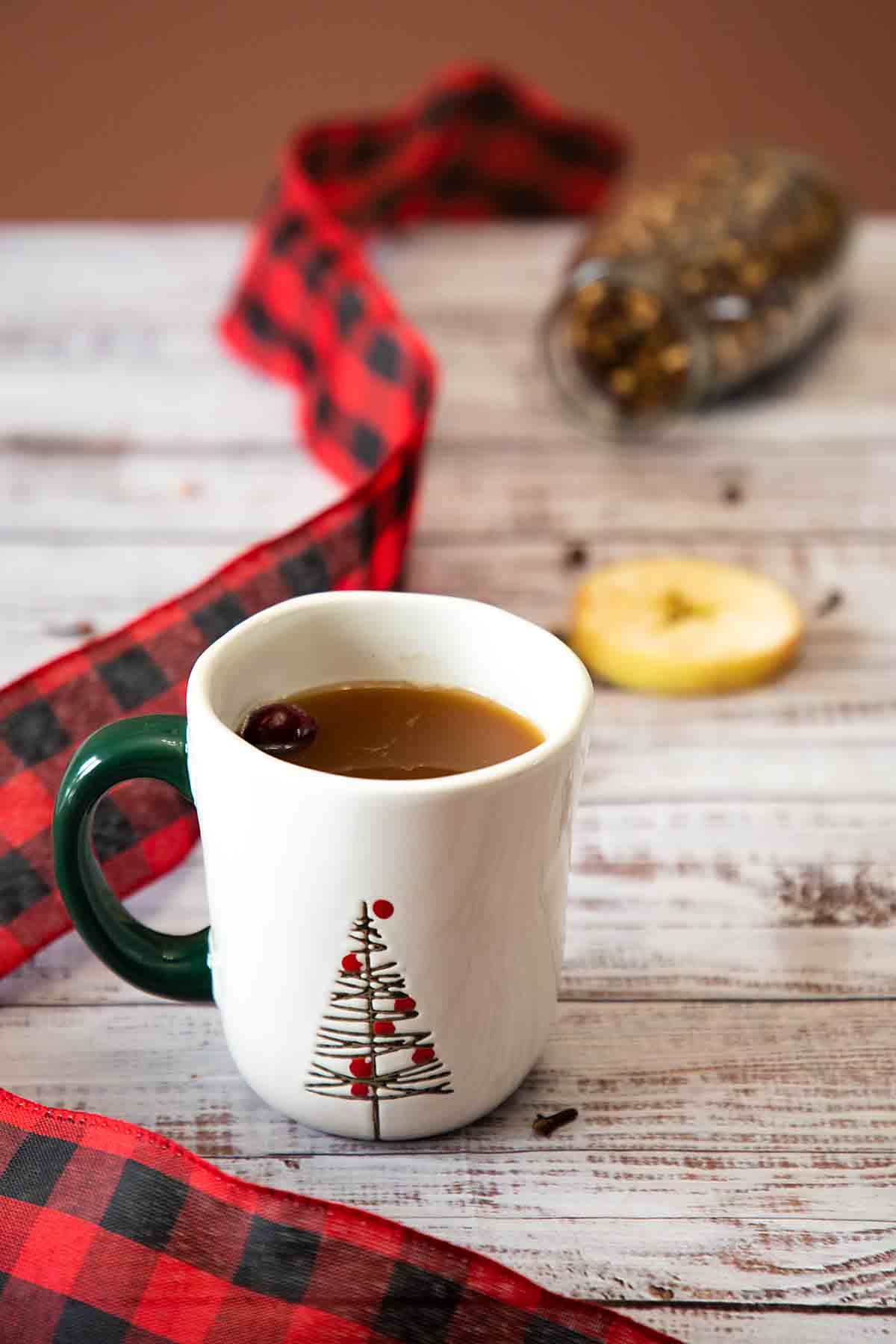 Apple cider and apple juice are both made from apples that have been cored, chopped, pressed and strained. But apple juice is heavily filtered which makes it clearer and less flavorful. In addition, some juices may have water, preservatives and sugar added. So while people do mull apple juice, cider will give you better results.

There is another type of cider that I haven’t mentioned and this is hard cider, a fermented alcoholic beverage similar to beer. While this can be a tasty drink, it does not have the right flavor profile for hot mulled cider.

In any case, apples are consistently on the EWG’s “dirty dozen” list of most contaminated fruits and vegetables, so buy your cider or juice organic if you can. 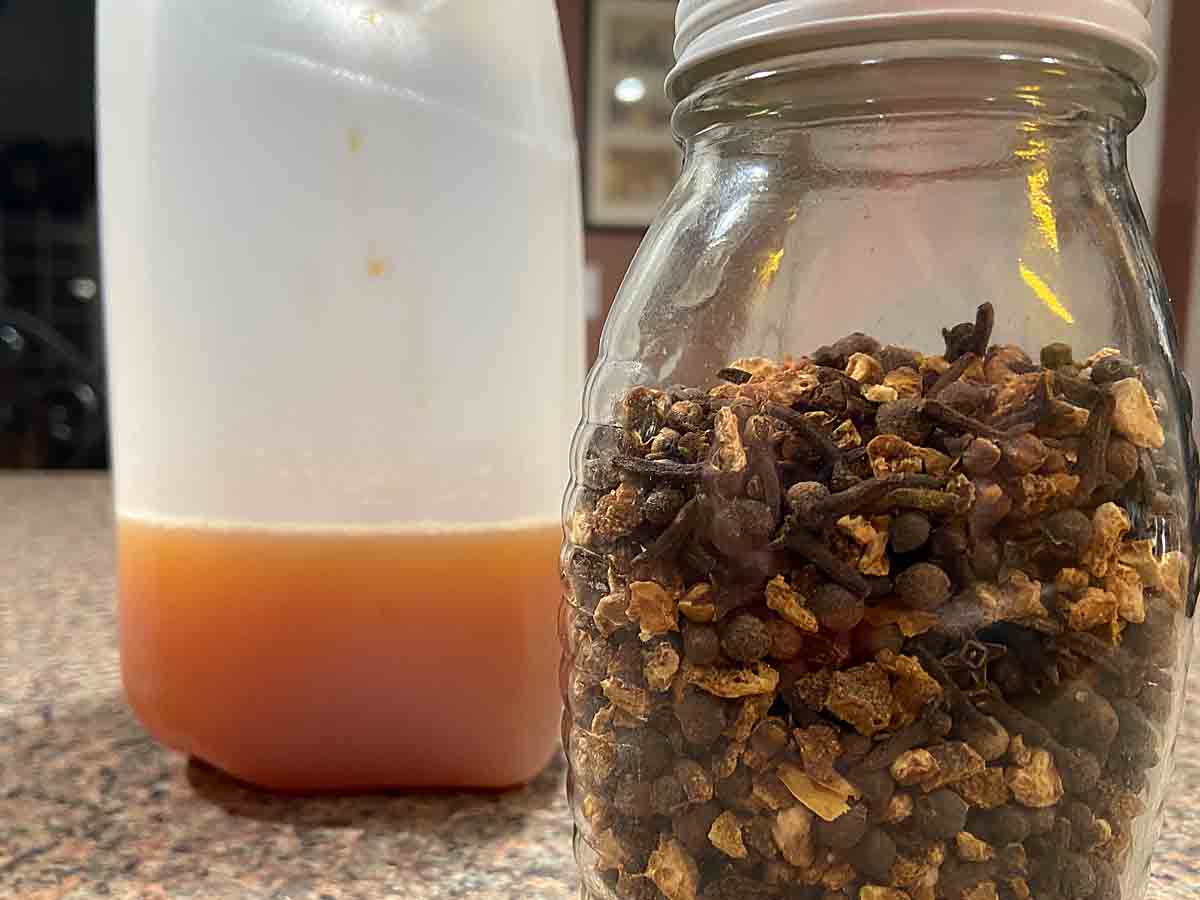 The basic mulling spices are cinnamon, allspice and cloves, but feel free to vary the mix based on your tastes or the ingredients in your pantry. Take a look at “Variations” below for some ideas.

When I first started making my own spiced apple cider, I’d buy little pre-made packets of spice mix, studded with cinnamon and star anise, wherever I encountered them. But eventually I wondered, “why buy pricey little packets when you can make your own?” Since then I head to the spice cabinet whenever the urge to mull cider hits.

And as an added bonus, my regular spices are probably fresher and more flavorful than an old mix that may have been sitting in the cupboard for who knows how long!

Since apples are naturally sweet, no sugar is needed to make spiced apple cider. Even better, many of the local cider makers work to pull together a complimentary blend of sweet and tart apples so their cider has the best flavor!  Another reason to go local!

To make spiced apple cider, you first measure the cider into a saucepan 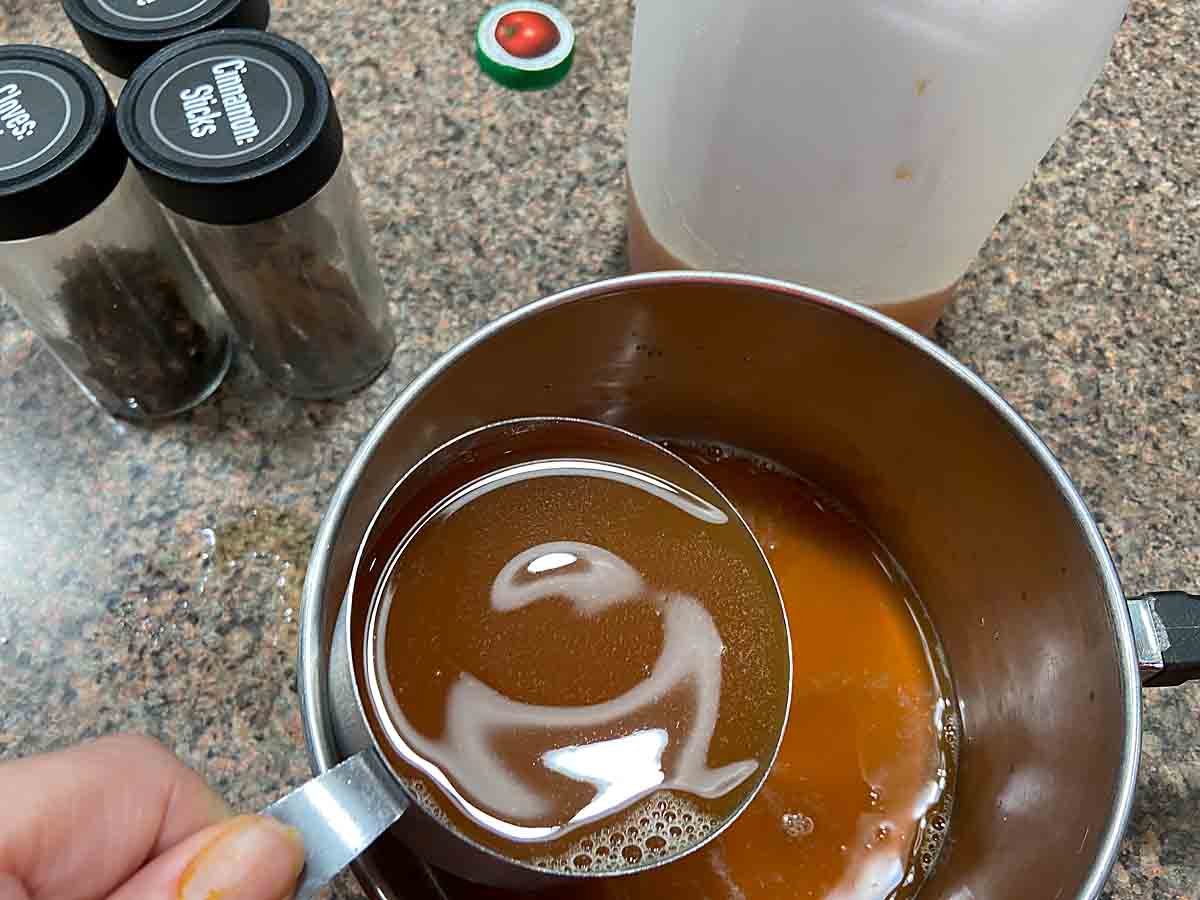 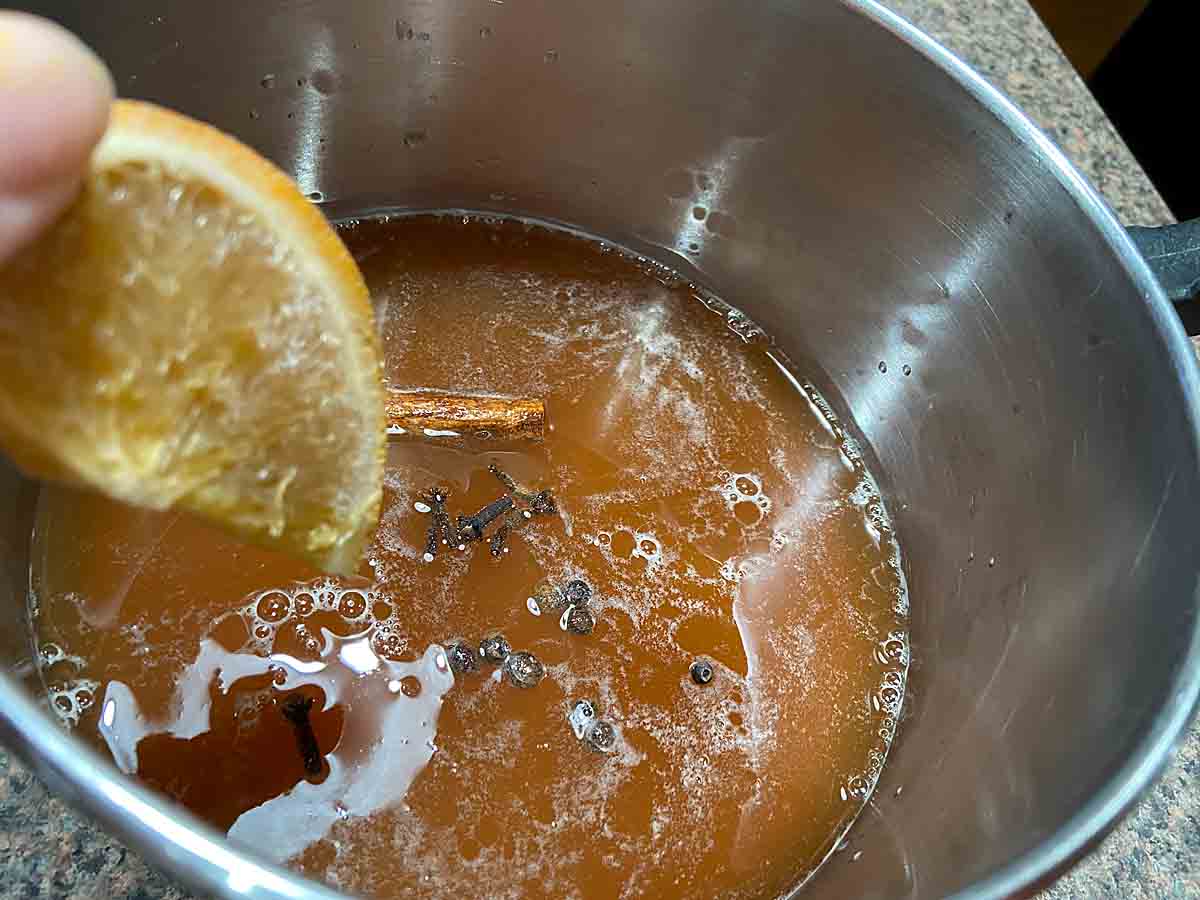 then heat, without boiling, until spice flavors have been infused.  Enjoy warm!

Mulled apple cider can be served in anything with a handle. This can be a cute ceramic mug (seasonally appropriate) or something glass like a glass Irish coffee mug.

For a festive look, garnish the mug with a cinnamon stick and fresh cranberries. Or even a slice of apple or orange.

This also makes a perfect party holiday spiced cider! If you are serving over the course of an evening, you may want to keep it warm. A slow cooker or even a fondue pot on warm (don’t let it boil) can be helpful here. Consider floating cranberries and orange slices in the pot for a Christmas Cider look! 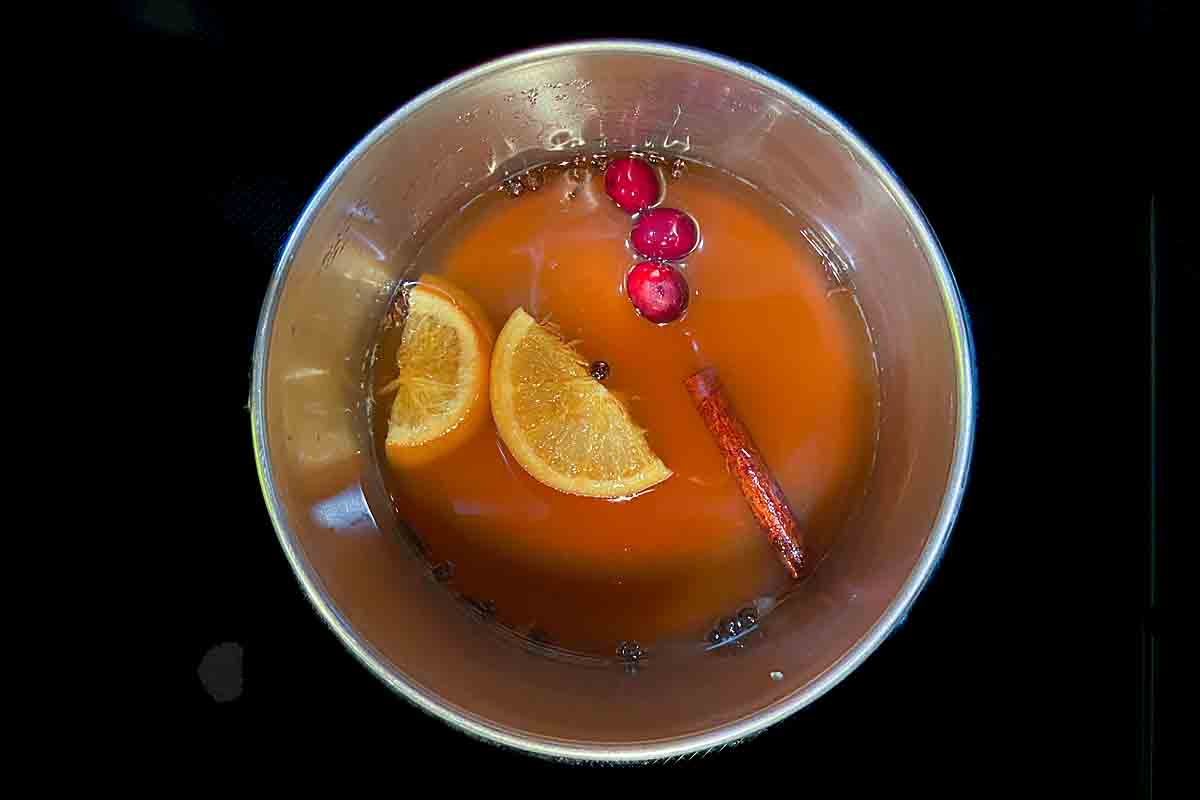 Don’t worry, there are no hot cider police looking over your shoulder—and it’s pretty hard for this not to taste good! So feel free to change up the spices.

No oranges or orange peel? Leave it out. In the mood for ginger? Toss in a slice of fresh or candied ginger—or maybe some star anise or nutmeg. You can even make a chai spiced cider by adding cardamom and ginger and maybe a few peppercorns to the cinnamon, cloves and allspice!

Of course, some people prefer a hot spiked cider! If you’d like to turn this into a boozy hot toddy you can add an alcohol like brandy, apple schnapps or even a spiced rum like Captain Morgan. Just add 2-3 tablespoons per drink to the hot spiced cider. Or you can go fancy with this Caramel Apple Hot Toddy.

Another related (alcoholic) drink is mulled wine, made similarly but with a base of wine instead of cider. 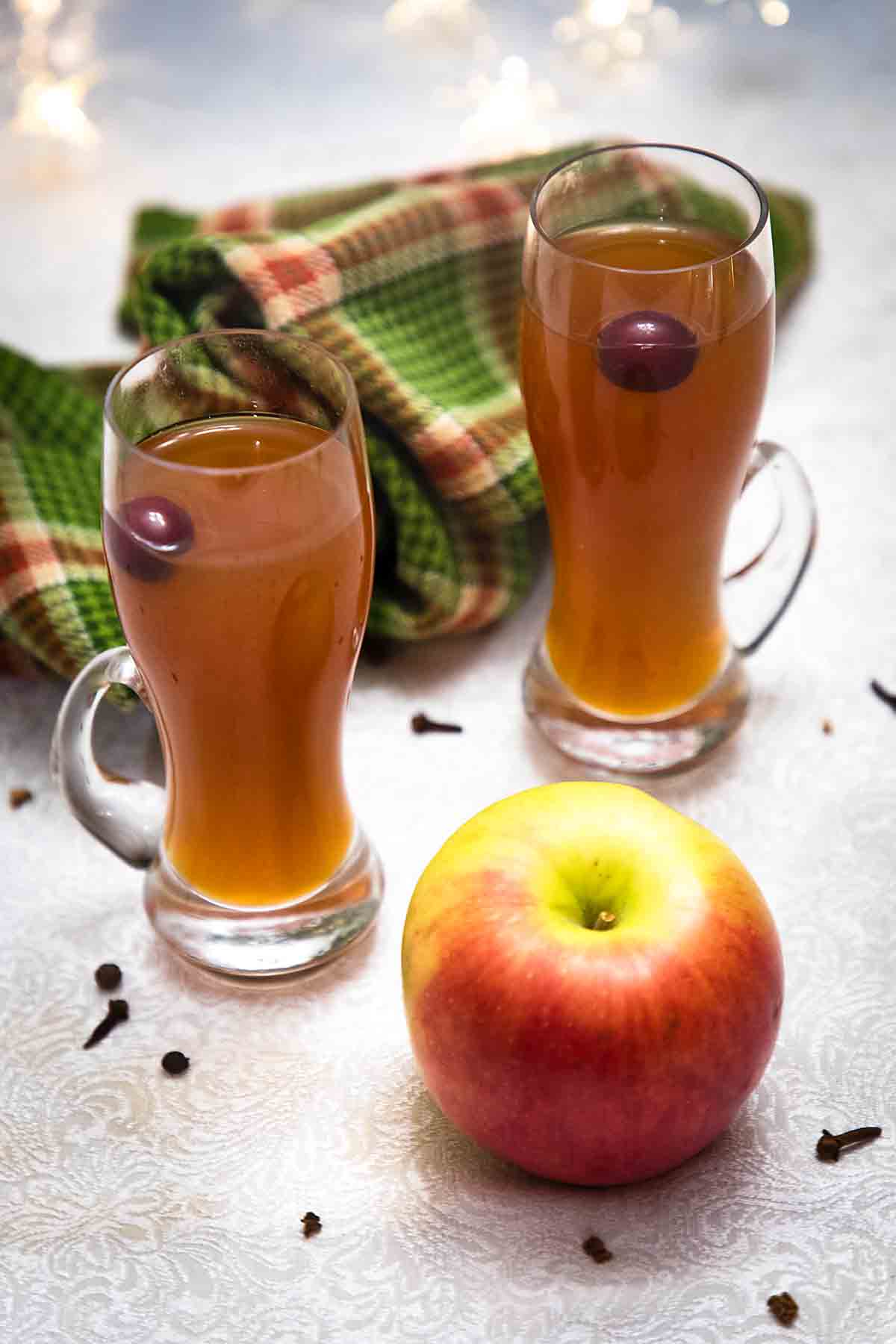 This drink is pretty foolproof, but try not to let the cider boil which may cause it to separate. It’s still fine to drink, just a little less appealing.

The freshness of your spices can potentially impact the final flavor. If you know your spices are old, consider increasing the amount.

And for more tasty mocktails…

Heat slowly until hot, but not boiling. Keep hot, but below boiling, until cider has taken on enough of the spice flavor, about a half hour.

Strain out spices and serve

Try not to let the cider boil.  You can still drink it, but it may separate.

If you’d like to turn this into a “hot toddy,” brandy or apple schnapps are great additions--about 2-3 tablespoons per cup.